In Red Hat JBoss Data Grid, Cross-Datacenter Replication allows the administrator to create data backups in multiple clusters. These clusters can be at the same physical location or different ones. JBoss Data Grid's Cross-Site Replication implementation is based on JGroups' RELAY2 protocol.
Cross-Datacenter Replication ensures data redundancy across clusters. Ideally, each of these clusters should be in a different physical location than the others.
Report a bug

Red Hat JBoss Data Grid's Cross-Datacenter Replication operation is explained through the use of an example, as follows: 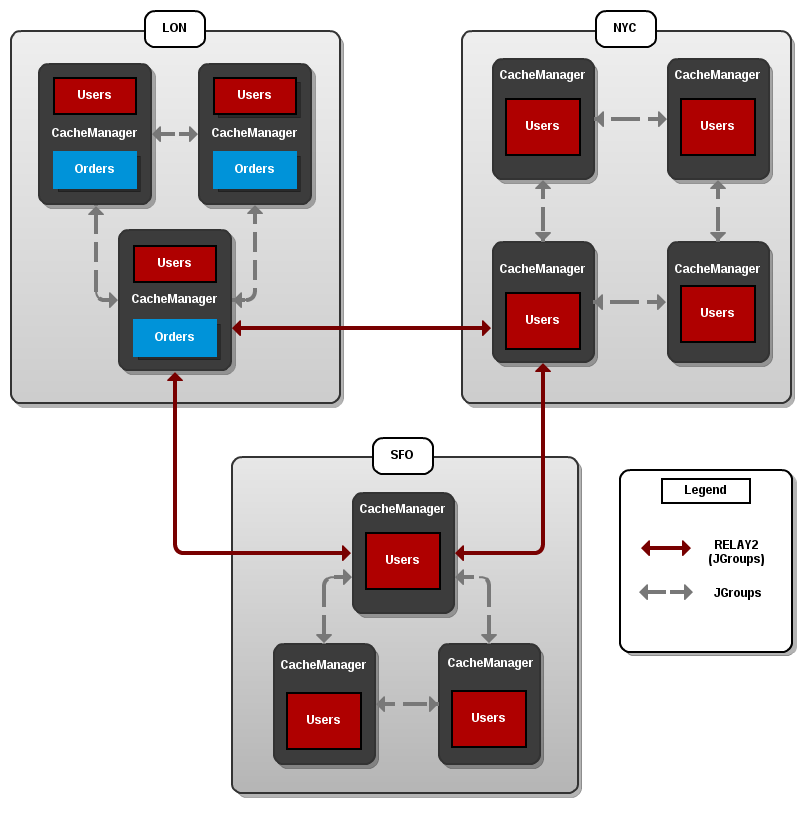 Three sites are configured in this example: LON, NYC and SFO. Each site hosts a running JBoss Data Grid cluster made up of three to four physical nodes.
The Users cache is active in all three sites - LON, NYC and SFO. Changes to the Users cache at the any one of these sites will be replicated to the other two as long as the cache defines the other two sites as its backups through configuration. The Orders cache, however, is only available locally at the LON site because it is not replicated to the other sites.
The Users cache can use different replication mechanisms each site. For example, it can back up data synchronously to SFO and asynchronously to NYC and LON.
The Users cache can also have a different configuration from one site to another. For example, it can be configured as a distributed cache with owners set to 2 in the LON site, as a replicated cache in the NYC site and as a distributed cache with owners set to 1 in the SFO site.
JGroups is used for communication within each site as well as inter-site communication. Specifically, a JGroups protocol called RELAY2 facilitates communication between sites. For more information, refer to the RELAY2 section in the JBoss Data Grid Administration Guide.
Report a bug