In order to deploy the playbooks created for this reference architecture, some modifications of the conrent are required. Notably, a password file encrypted with ansible-vault needs to be copied to ./roles/passwords/main.yaml as outlined in the playbooks chapter. Environment specific changes should be made to the variables found under ./group_vars/.

If an organization has an existing git infrastructure (such as gitlab) they may chose to clone the public repository and maintain their changes internally. Otherwise, the repository can be forked on github to track hold the requisite changes.

In either case, the modified playbooks must be stored in a git repository that is accessible to Ansible Tower.

The HPE OneView Ansible modules are not a core module yet, so they are not included in a standard installation. They must be installed on the Ansible Tower server along with the required python packages.

Then clone the modules and make them accessible to Ansible Tower:

As mentioned in the Playbooks chapter, the set of playbooks require a modified nsupdate module to support one to many DNS creation. A pull request has been submitted to support these feature. For now, the modified module must be copied to the Ansible Tower server:

Ansible typically communicates to a target host via SSH, using a public key. Ansible Tower can store and encrypt these credentials to run playbooks.

An SSH key pair is generated:

And then stored in Ansible Tower by clicking the gear icon, then credentials and finally +ADD: 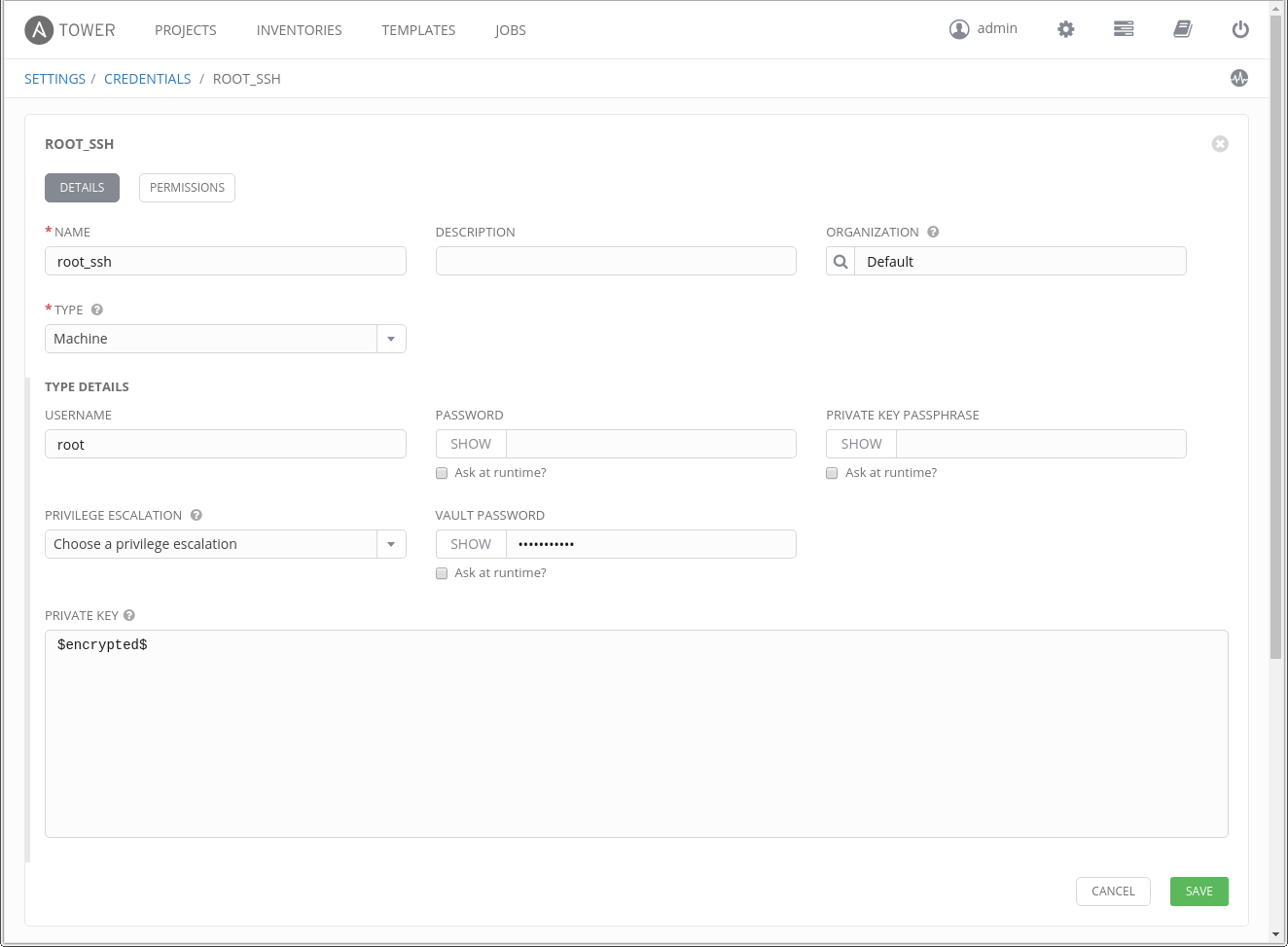 The public SSH key is deployed via Red Hat Satellite when a host is provisioned.

In some cases, the git repository may require login details, which can also be stored safely in Ansible Tower: 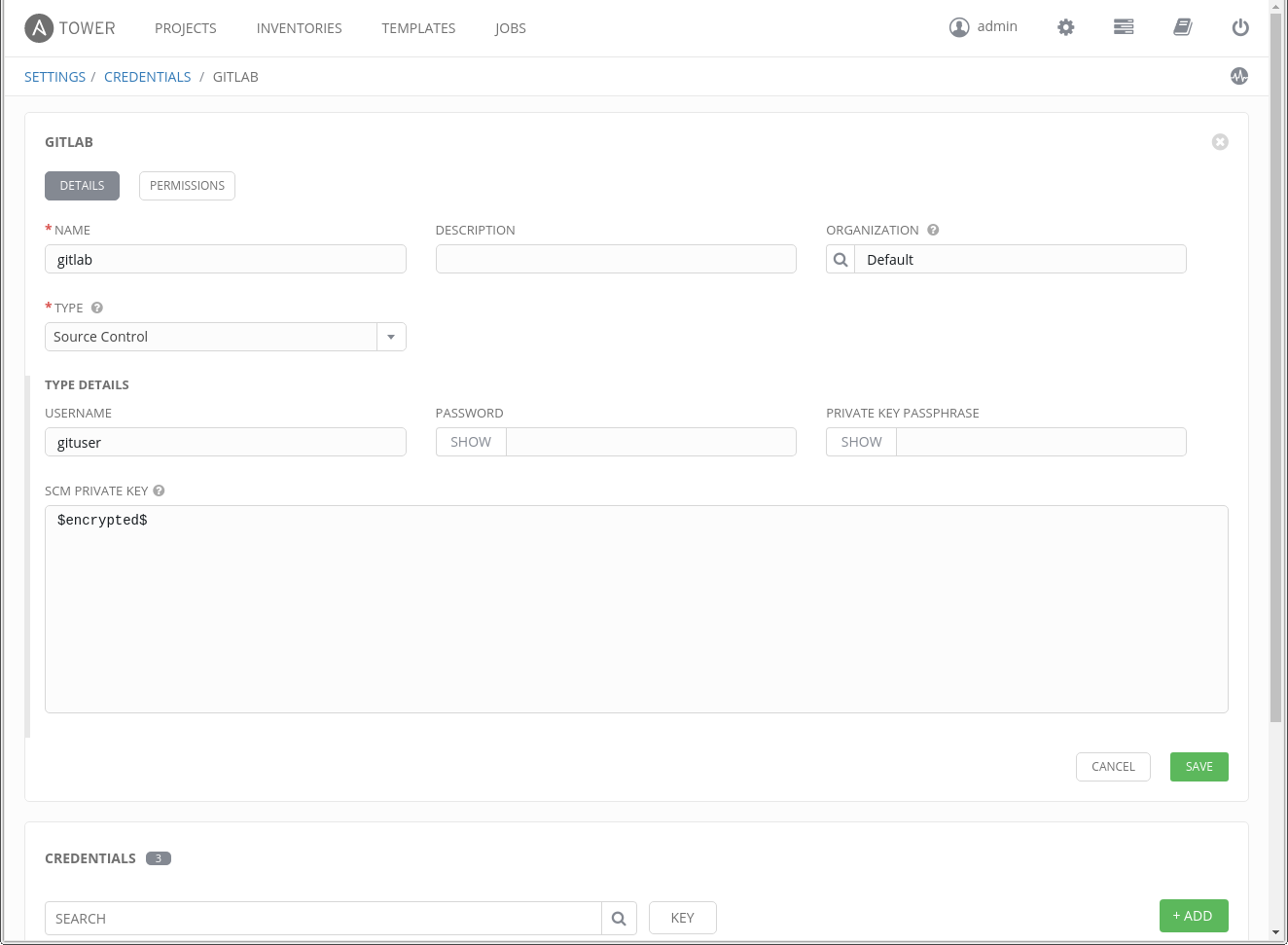 The locally maintained git repository is added to Ansible Tower: 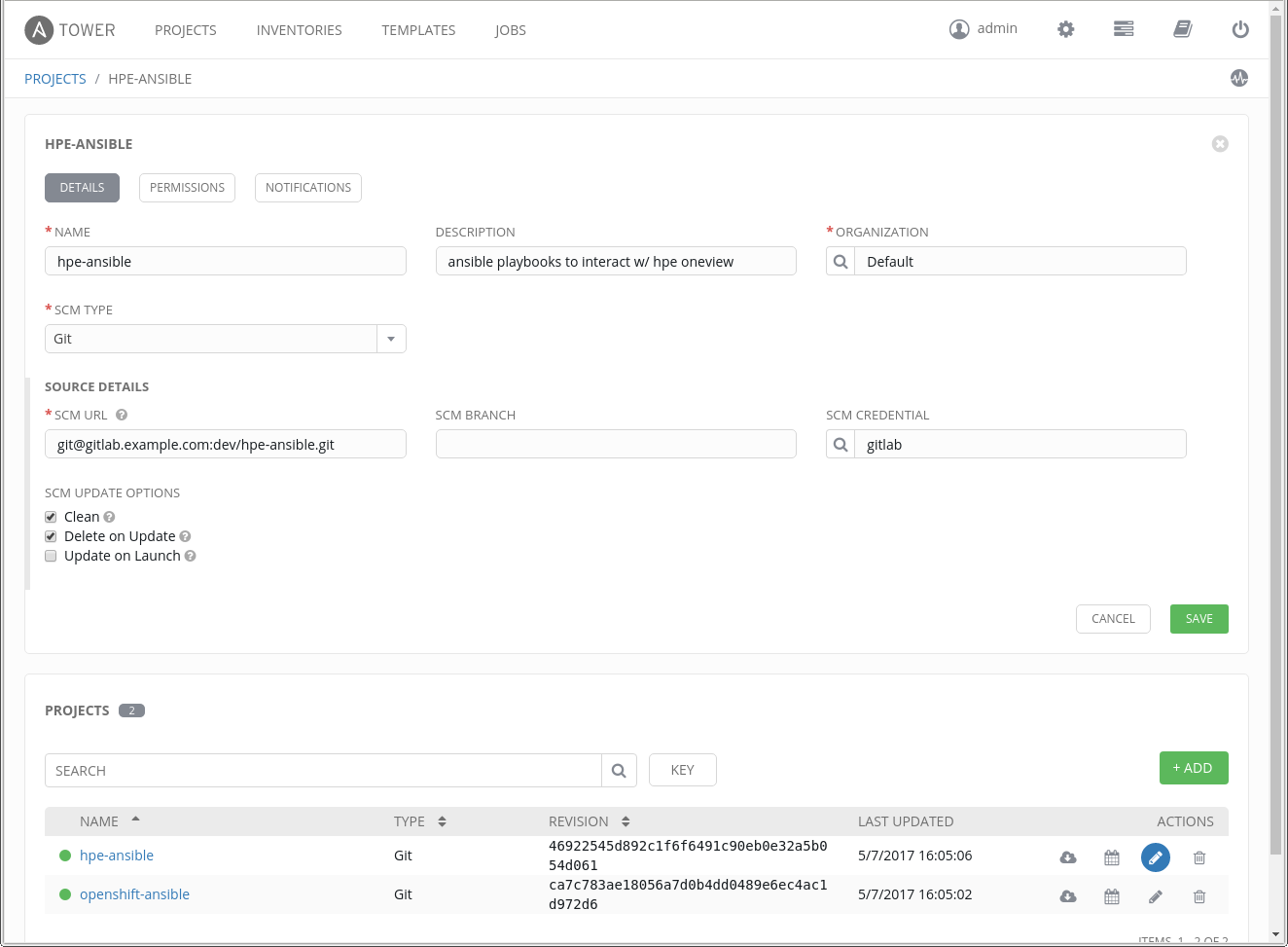 As well as the publically accessibly openshift-ansible playbooks: 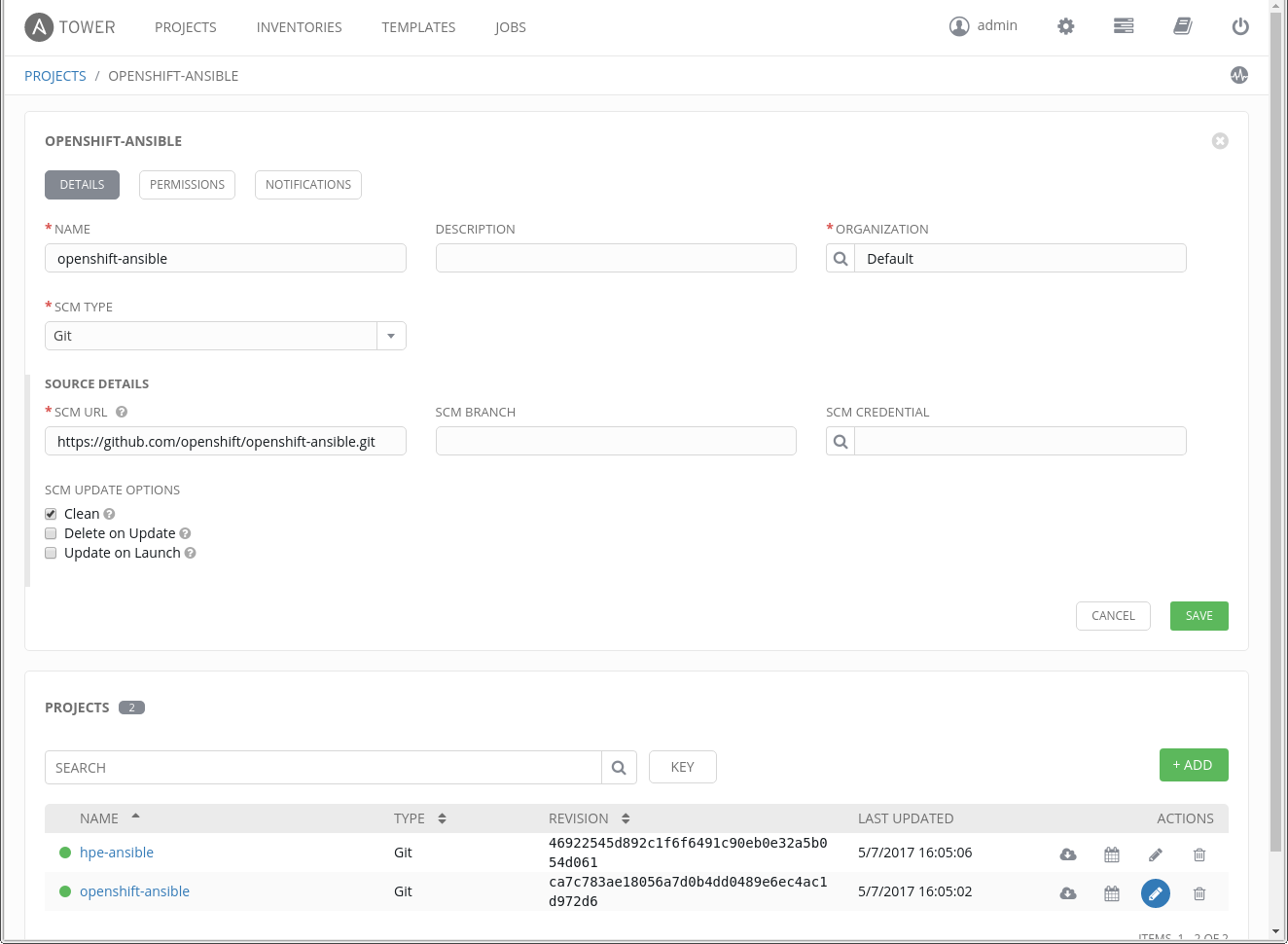 The list of hosts and variables for this reference architecture can be entered via the web GUI, however for complex playbooks with a lot of variables, this can be cumbersome. Ansible Tower provides a handy CLI tool that can be used to import this data.

Before using the tool, the empty inventory must first be created in the web GUI:

The host file and variables are copied to a directory on the Tower server:

And then imported using tower-manage:

Unfortunately there is one issue with this approach. Due to a bug, Tower can not parse certain inventory lines, for example:

openshift_node_labels is interpreted as a string rather than a dictionary. After importing the inventory, the variable must be formatted slightly different to parse correctly:

With credentials, projects and inventories in place, the job templates can be created in Ansible Tower. This is accomplished by clicking on Templates, then Add → Job Template in Ansible Tower: 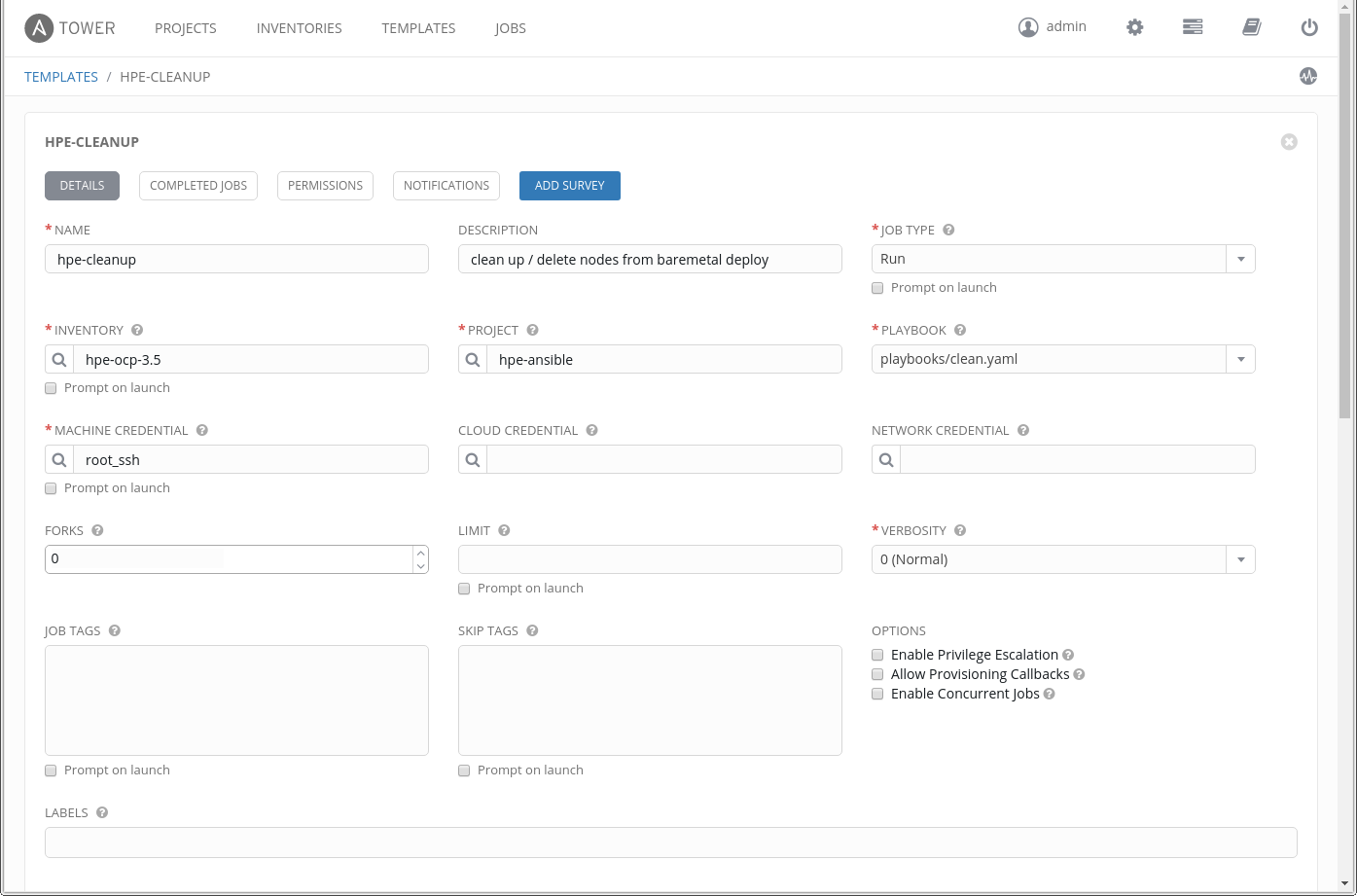 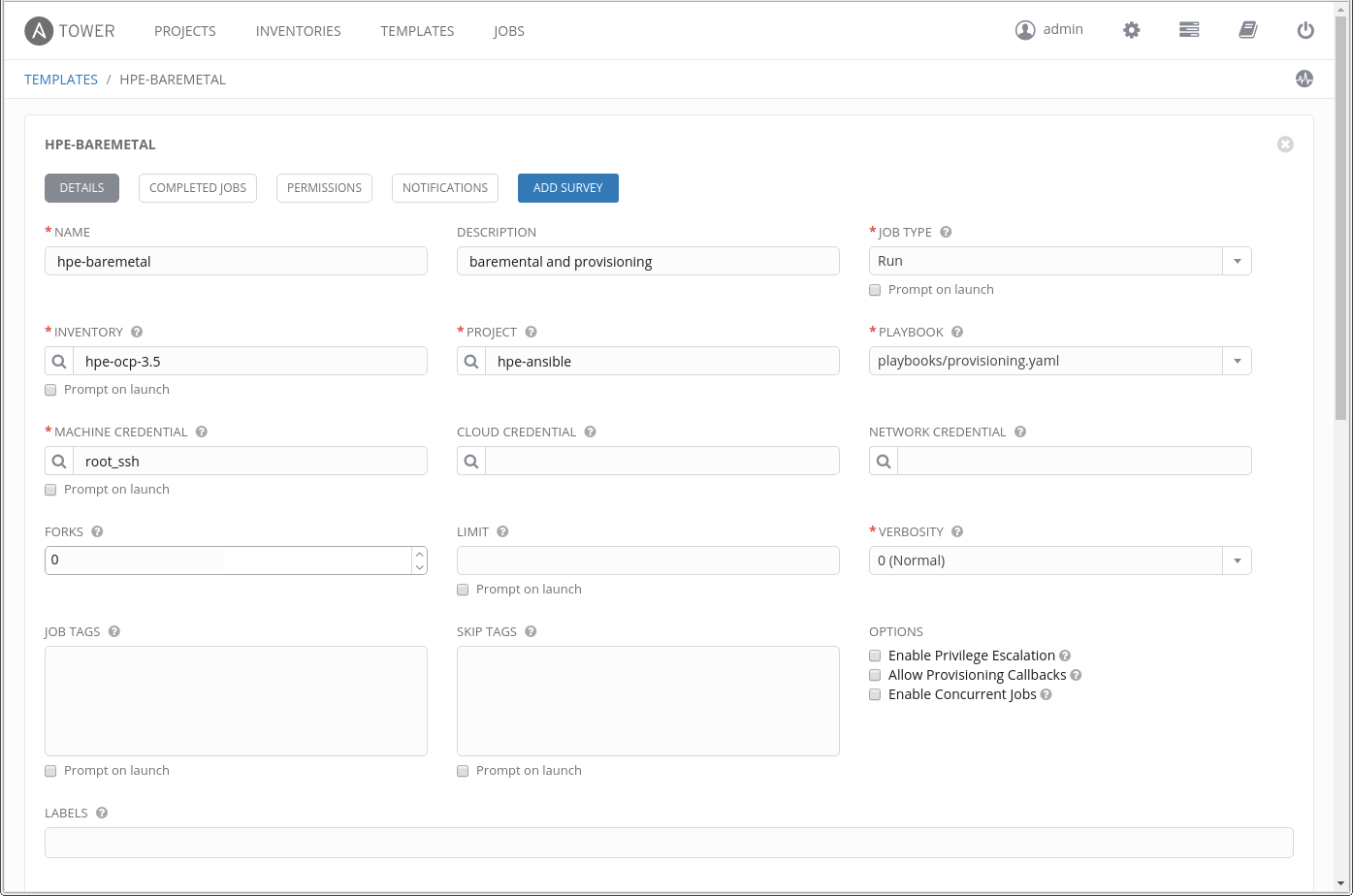 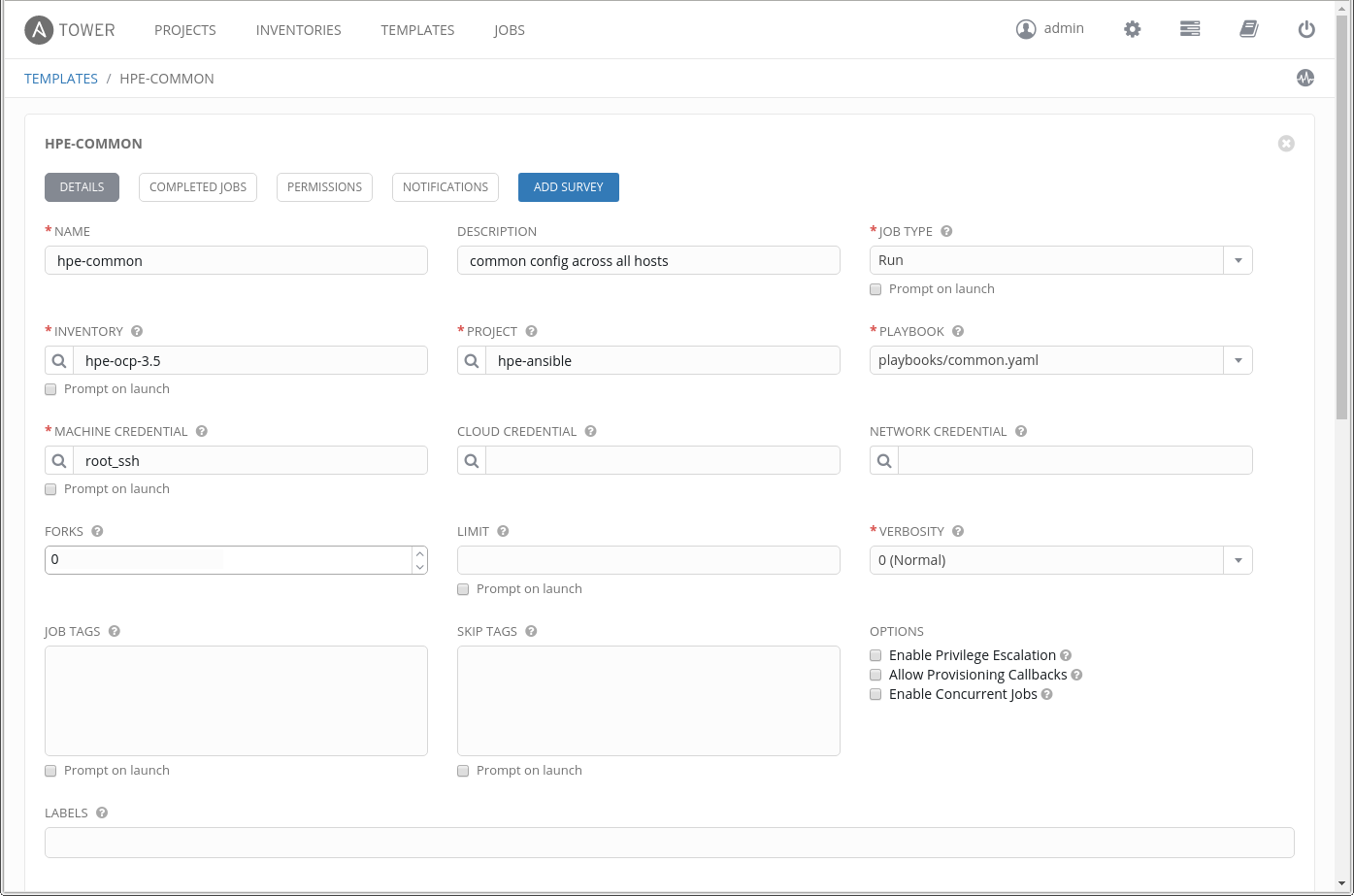 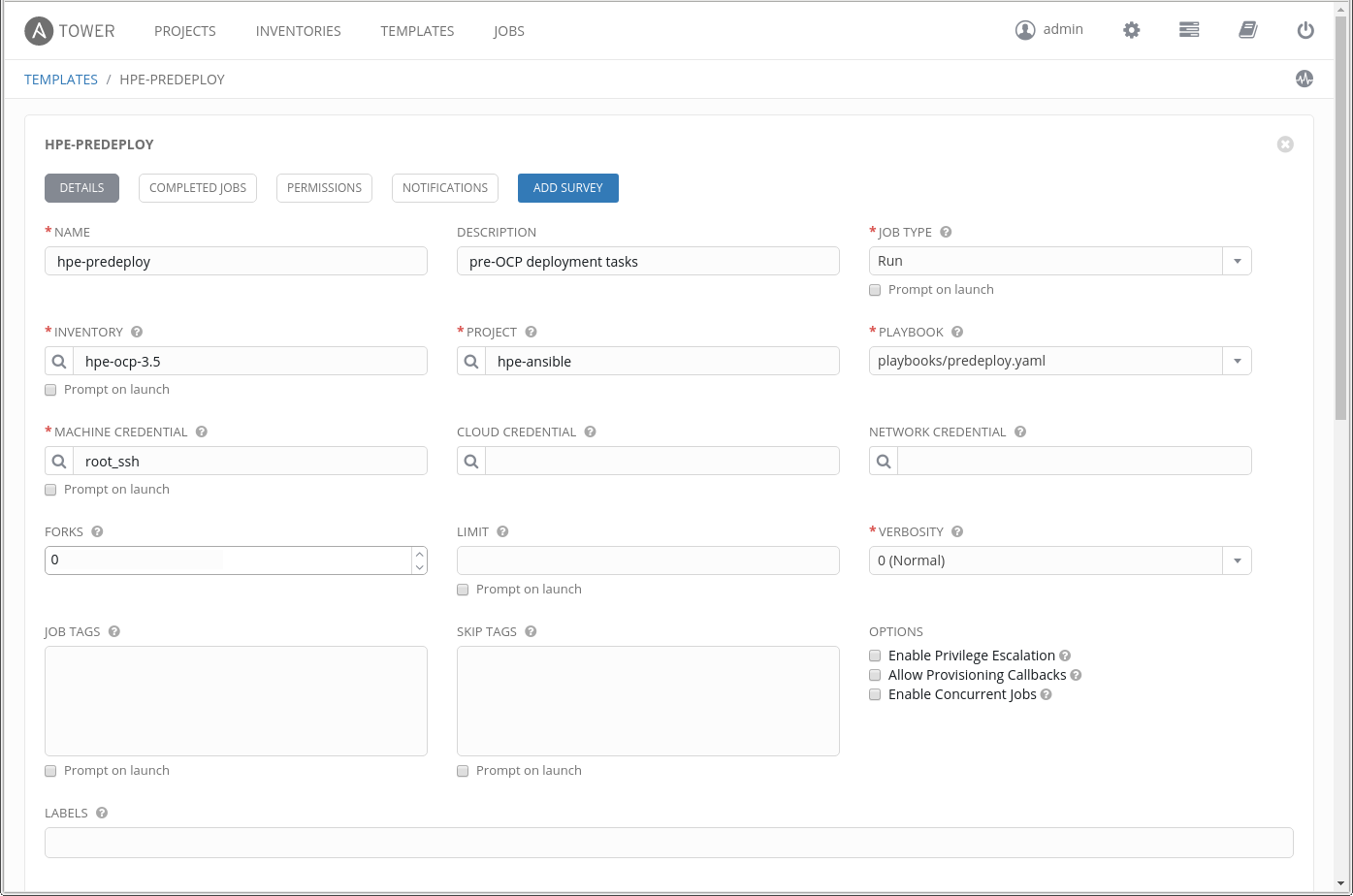 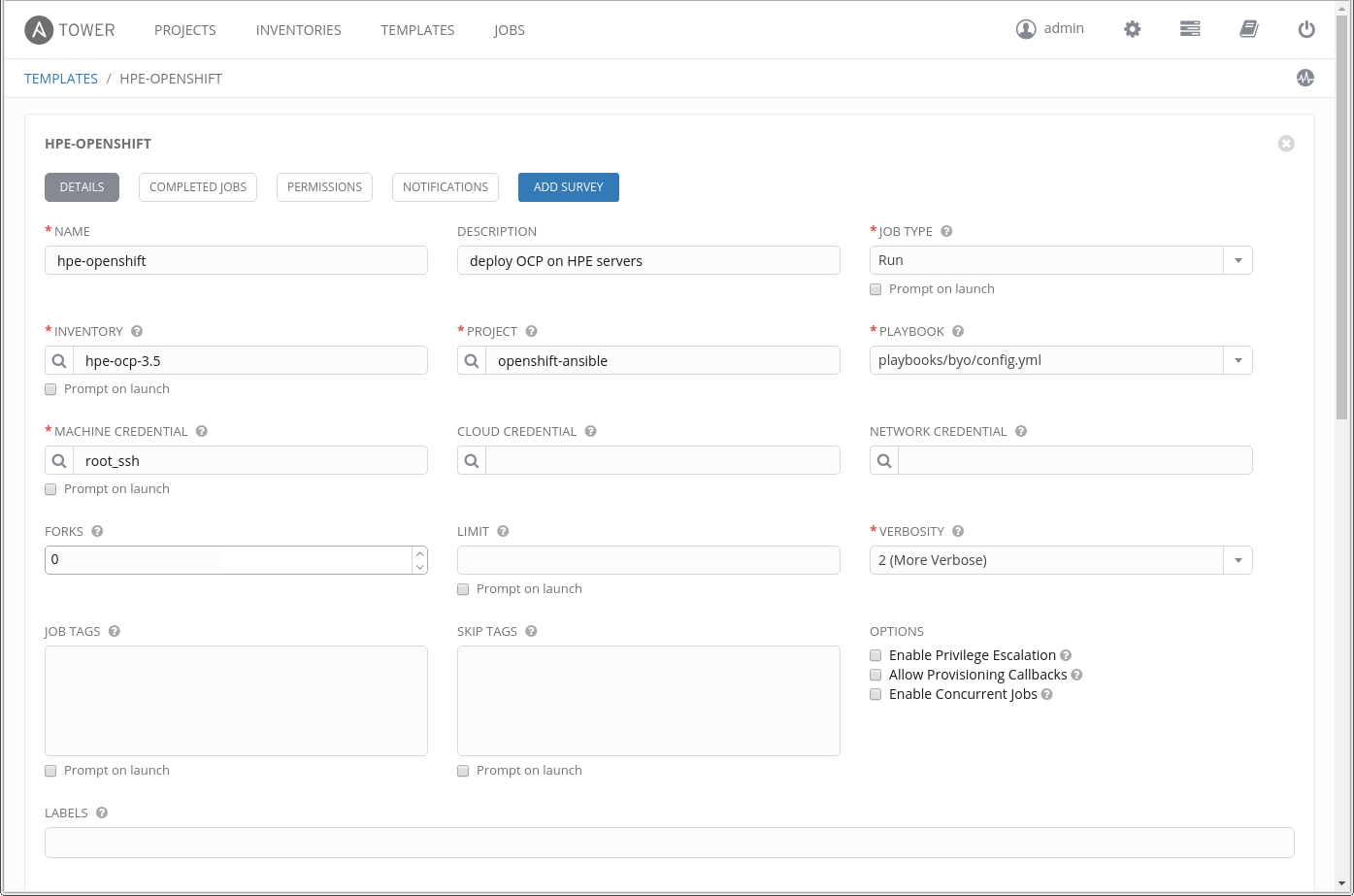 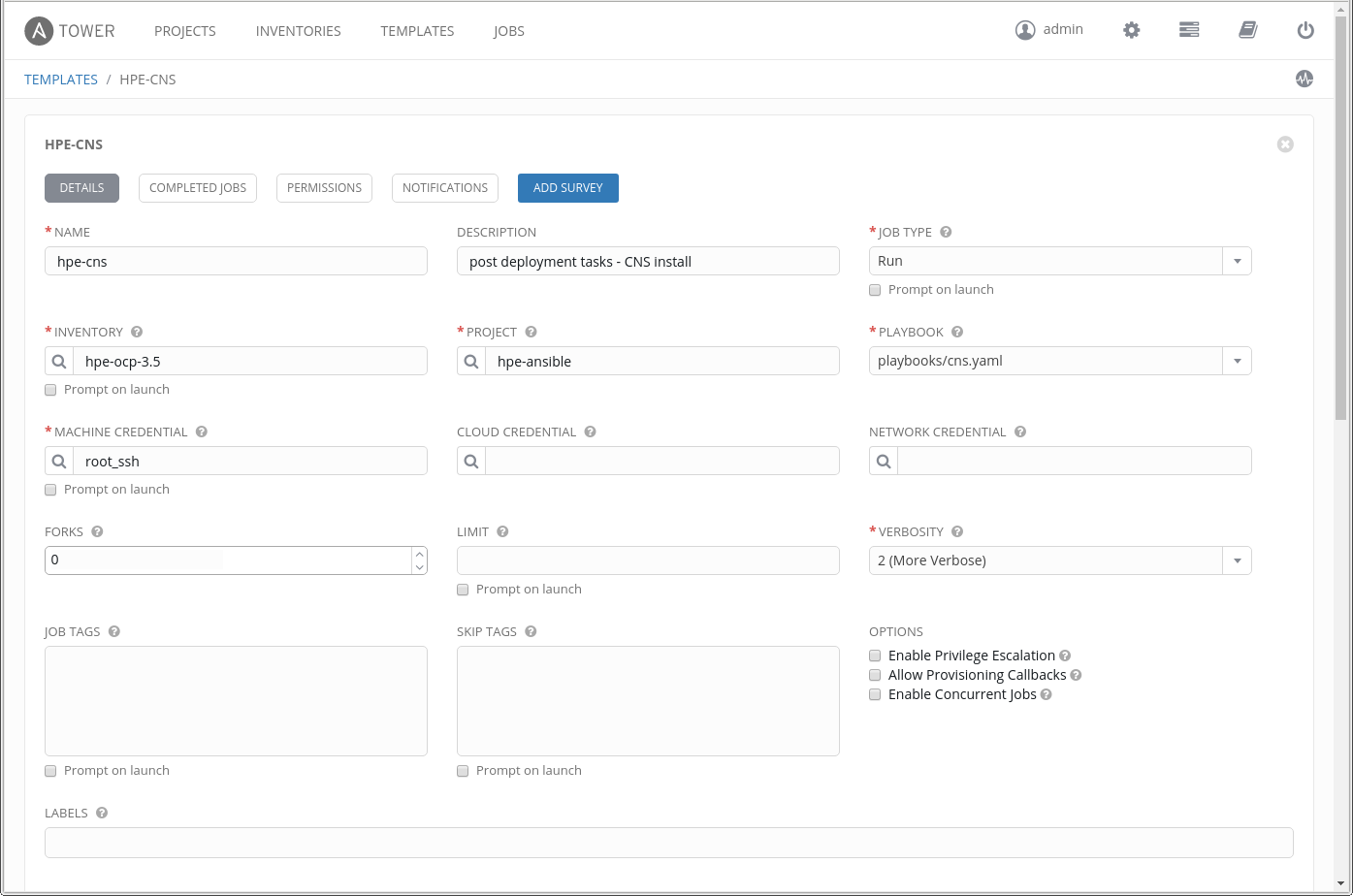 The workflow to chain all the job templates together is then created by navigating to Templates, then Add → Workflow Job Template: 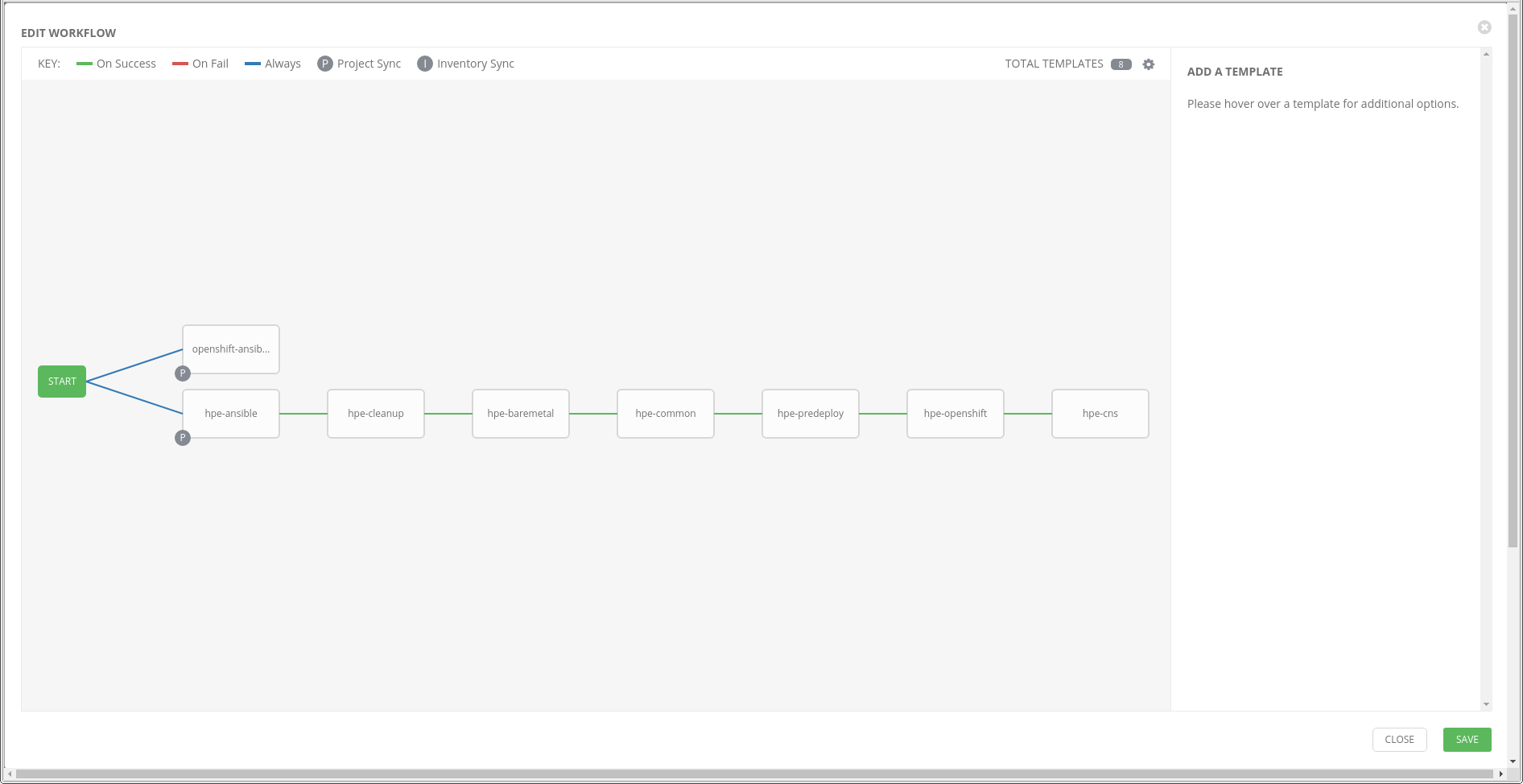 To launch the workflow, browse to Templates, find the newly created workflow and hit the rocket ship button: 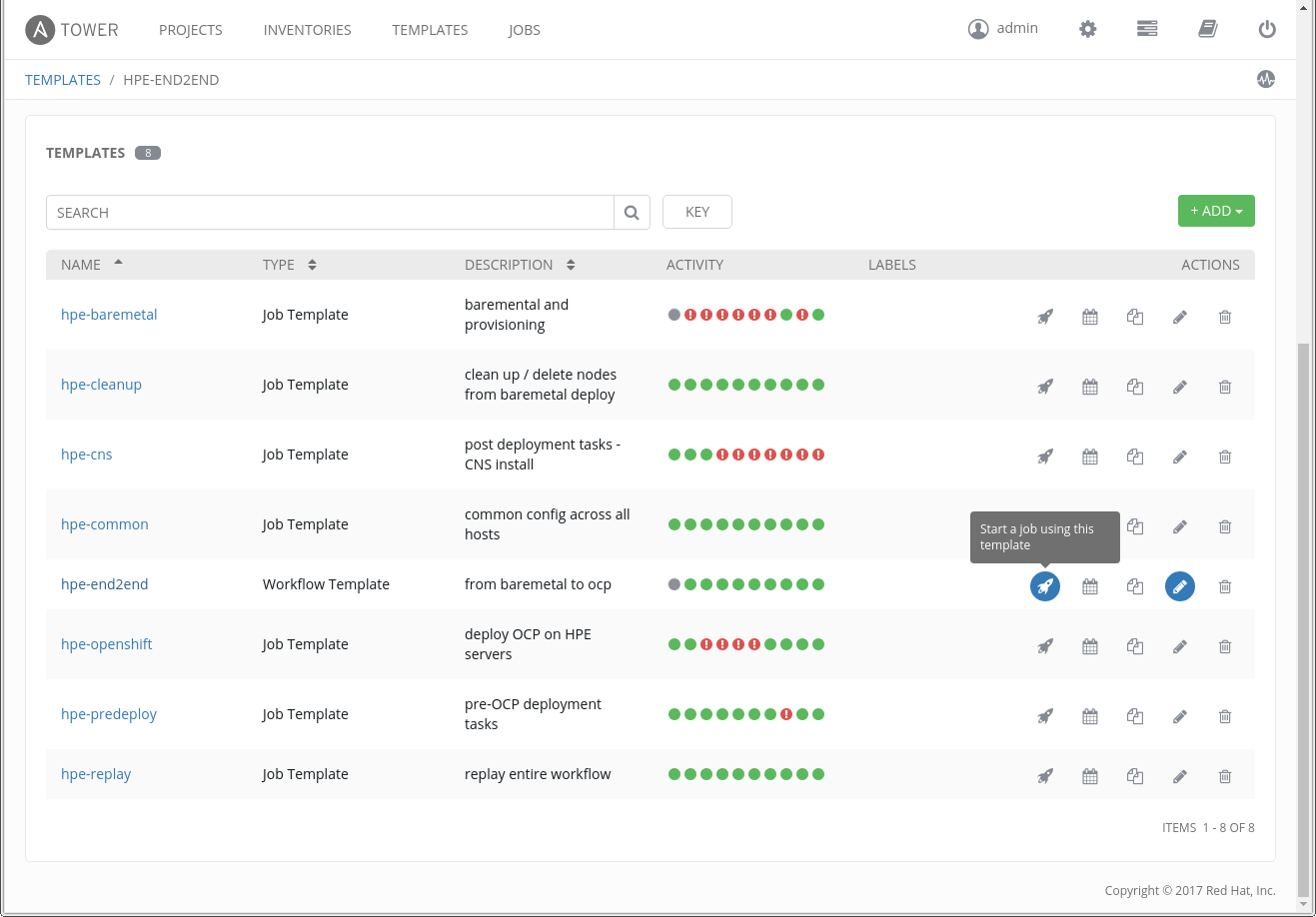