Red Hat OpenStack Platform offers the innovation of the OpenStack community project, while also providing the security, stability, and enterprise-readiness of a platform built on Red Hat Enterprise Linux.

During the life cycle of a major release, Red Hat makes commercially reasonable efforts to maintain binary compatibility for the core runtime environment across all minor releases and errata advisories. If necessary, Red Hat may make exceptions to this compatibility goal for Critical impact security or other significant issues.

The following table details the subscription services, including support and software maintenance, performed during each phase of the Red Hat OpenStack Platform life cycle:

1. Technical Support depends on the service level included in your Red Hat OpenStack Platform or Red Hat Cloud Infrastructure subscription agreement.
2. Red Hat may choose, as a temporary measure, to address catastrophic issues with a significant customer business impact with a hotfix while the Red Hat Bug Fix Advisory (RHBA) is being created.
3. Each feature backport will require review from Red Hat Product Management and Engineering prior to commitment
4. Extended Life Support service subscription is valid only for existing infrastructure and does not cover new production installations of the product. New, non-production deployments are allowed for FFU testing.
5. At the end of Full Support, or 90 days after the latest major release of Red Hat OpenStack Platform, whichever is later, Red Hat will stop processing certification requests made against the previous release. Any certification request made after this time should be aligned with the latest version of Red Hat OpenStack Platform.

During the Production Phase, qualified Critical and Important Security Advisories (RHSAs) and urgent and selected High Priority Bug Fix Advisories (RHBAs) may be released as they become available. Other errata advisories may be delivered as appropriate.

If available, select enhanced software functionality may be provided at the discretion of Red Hat.

Maintenance releases will also include available and qualified errata advisories (RHSAs, RHBAs, and RHEAs). Maintenance releases are cumulative and include the contents of previously released updates. The focus for minor releases during this phase lies on resolving defects of medium or higher priority.

In addition, and only during Full Support:

Same as Maintenance Support, with a change of:

This policy does not apply retroactively to existing deployments.

Our official deployment and management tool is part of Red Hat OpenStack Platform release and therefore it has same support criteria as the core product.

Any installers which were released before Red Hat OpenStack Platform director became the official deployment and management tool (version 7) are no longer supported (end of life).

Customers have the option of in-place upgrades as well as parallel migrations.

For a parallel migration with minimal additional hardware (currently estimated as 1 undercloud node, 3 controller nodes, and 2 compute nodes), Red Hat engineers have collaborated on the os-migrate open-source tool. Given the many options available for parallel migrations, support for this is provided by Red Hat as part of a Consulting engagement. Note that some outage will be required for the cloud workloads being migrated. 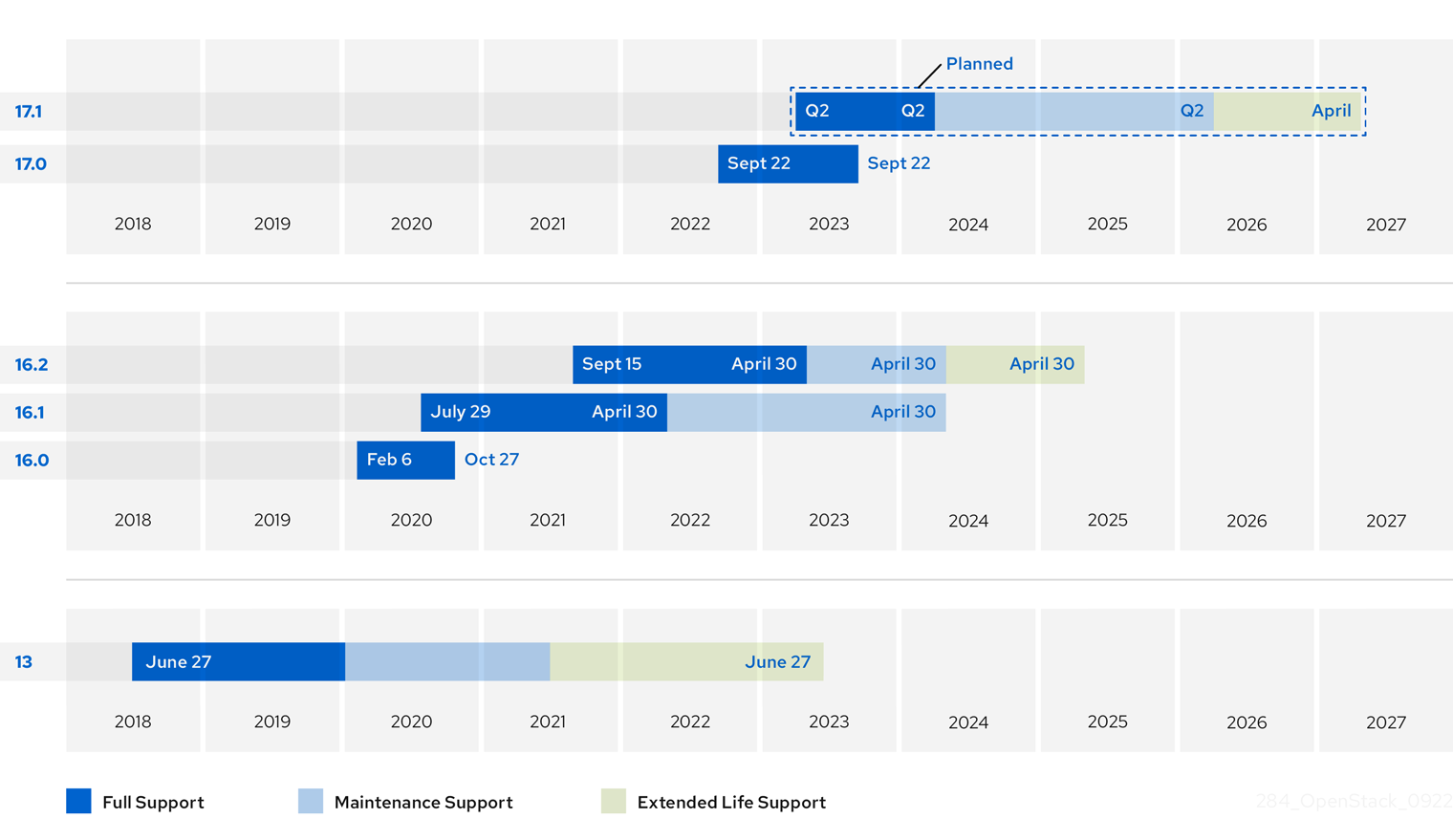 Each Red Hat OpenStack Platform version supports only one Major.Minor release version of Red Hat Enterprise Linux including all asynchronous update releases. As such while you may continue to use existing versions, you must update to the latest version of Red Hat Enterprise Linux minor release to continue to consume new bug fix and security errata.