Containers have become the de facto starting point for newly developed applications and those applications are frequently deployed to Kubernetes running in virtual machines. For many, this means deploying Red Hat OpenShift to VMware vSphere, either on-premises or in one of the cloud-based offerings such as VMware Cloud on AWS.

This implementation guidance is targeted at joint Red Hat OpenShift and VMware Cloud on AWS customers who want to deploy, manage, and use OpenShift deployed to and integrated with VMware vSphere. This includes the full-stack automated install experience, cloud provider integration for dynamic node provisioning, and storage integration using the Container Storage Interface (CSI).

This implementation guidance provides recommendations on how to deploy OpenShift 4.6 to VMware on AWS with vSphere 7 and VSAN 7. OpenShift is deployed using the full-stack automation experience and configured with the following integrations with the vSphere platform: 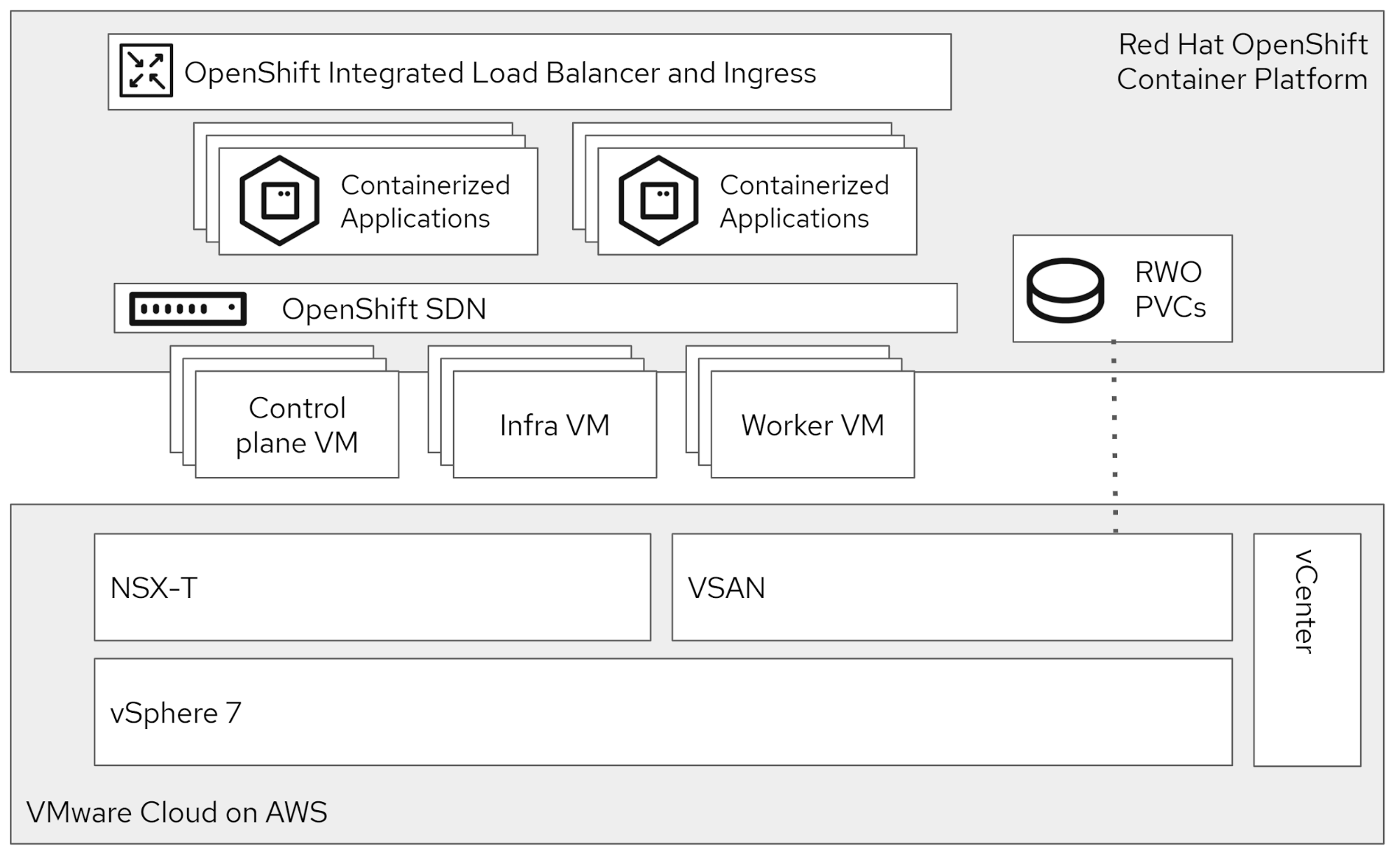 As a result of OpenShift utilizing the VMware integrations, such as Cloud Native Storage, the vSphere administrator gains deep insights to the workload characteristics and utilization of the containerized applications running in OpenShift. This includes the ability to observe and analyze the storage characteristics for the applications, virtual machine resource utilization, and more.

VMware Cloud Native Storage (CNS), a Container Storage Interface (CSI) implementation for vSphere and VSAN datastores, enables dynamic provisioning for application Persistent Volumes (PV). When deployed to vSphere 7 and VSAN 7, as in this guide, both Read-Write-Once (RWO) and Read-Only are available for applications and services. 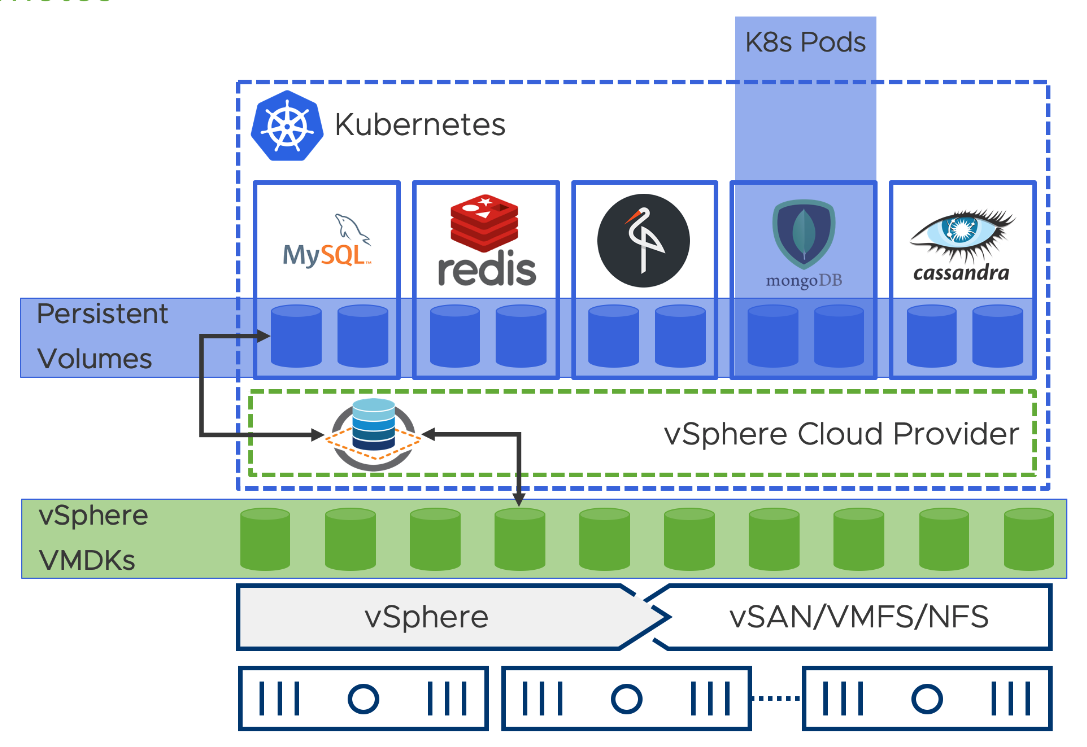 In addition to enabling access to both RWO and RO storage for applications, VMware’s CNS integration provides detailed information to the vSphere administrator via vCenter APIs and GUI integration.

When deploying OpenShift to a VMware vSphere platform there are multiple considerations during the design phase which need to be taken into account. Utilizing VMware Cloud on AWS addresses many of these automatically as a result of the pre-deployed and pre-configured environment, allowing the vSphere administrator to focus on the applications and not the underlying infrastructure while providing capabilities automatically which would normally take significant additional effort to configure and manage.

OpenShift 4 changed the deployment and installation paradigm from OpenShift 3, bringing a simplified and streamlined experience focused on reliably and repeatedly deploying OpenShift clusters that are customized after install. OpenShift 4.5, released in mid-2020, added VMware vSphere as a supported provider for the full-stack automation install and Machine API paradigm for managing cluster nodes.

With OpenShift 4 and the full-stack automation deployment method, the installer and the cluster create and manage the infrastructure resources needed by the OpenShift deployment. This includes creating and configuring network, virtual machine, and storage assets automatically using the cloud provider API. In contrast to the traditional method of creating virtual machines, installing the operating system, and then deploying OpenShift, OpenShift 4’s installer-provisioned infrastructure requires much less effort and knowledge for the OpenShift administrator to begin using and deploying applications rapidly.

After installation, OpenShift uses the Machine API Operator to interact with the underlying infrastructure provider for tasks like creating and destroying virtual machines. This enables the cluster to dynamically and automatically scale nodes up and down as needed to accommodate the application workload. Furthermore, the VMware Storage for Kubernetes in-tree provisioner is automatically configured when deploying OpenShift to VMware vSphere, which enables applications to request dynamically provisioned persistent volumes.

This document uses the full-stack automation deployment method to instantiate OpenShift clusters in a VMware Cloud on AWS environment. As a result of this, the ingress and API endpoints are managed automatically by OpenShift, which greatly simplifies the prerequisites. However, this configuration depends on OpenShift being able to manage the virtual IP addresses used for the endpoints. As a result, exposing the OpenShift apps (*.apps.clustername.domainname) and API (api.clustername.domainname) endpoints publicly via an AWS load balancer is not possible with this configuration. The VMC platform offers Public IP NAT capabilities natively. If you want to expose the default internal OpenShift ingress to the outside world, additional architecture and design considerations are needed. This is outside of the scope of this document.

VMware’s software-defined network capability, NSX-T, is deployed and configured with VMC, abstracting connectivity between virtual machines and providing services such as DHCP, firewalling, and load balancing for applications. This implementation guide does not use the VMware NSX Container Plugin for Kubernetes (NCP), NSX is also not used as the OpenShift SDN. This is due to NSX-T being part of the VMC managed service, and NCP not a component of this service at this time.

The NSX-T DHCP service is used for virtual machine IP management with the full-stack automated OpenShift deployment by using the Machine API integration with vSphere. Additionally, NSX-T firewall rules will be created to enable access to / from the OpenShift cluster and between the bastion management / installation host and the VMC vSphere hosts.

The VMC platform provides the necessary resilience and resource balancing for OpenShift without needing to explicitly describe VM to VM affinity rules. Should a physical host be lost VMC HA will recover OpenShift virtual machines to a running state on the existing physical hosts (and replace the failed host automatically).

OpenShift sizing can be broken into three different categories:

VMC is built on top of AWS bare metal infrastructure, this is the same bare metal infrastructure which runs AWS native services. When a VMware cloud on AWS SDDC is deployed, you consume these physical server nodes and run the VMware ESXi hypervisor in a single tenant fashion. Essentially, you are not sharing this physical infrastructure with any other customer of VMware or AWS. With this in mind, it is important to consider how many physical hosts you will need to host your virtual infrastructure. In order to determine this, VMware have provided the VMware Cloud on AWS Sizer. With this tool you can select the types of workload which you are bringing to VMware Cloud on AWS and input the number of virtual machines, specification information such as amount of storage required, number of vCPUs, vRAM and overcommit ratios. With this detail the sizer tool will generate a report, based on VMware best practices and describe for you the number of hosts you will need and the cluster configuration. 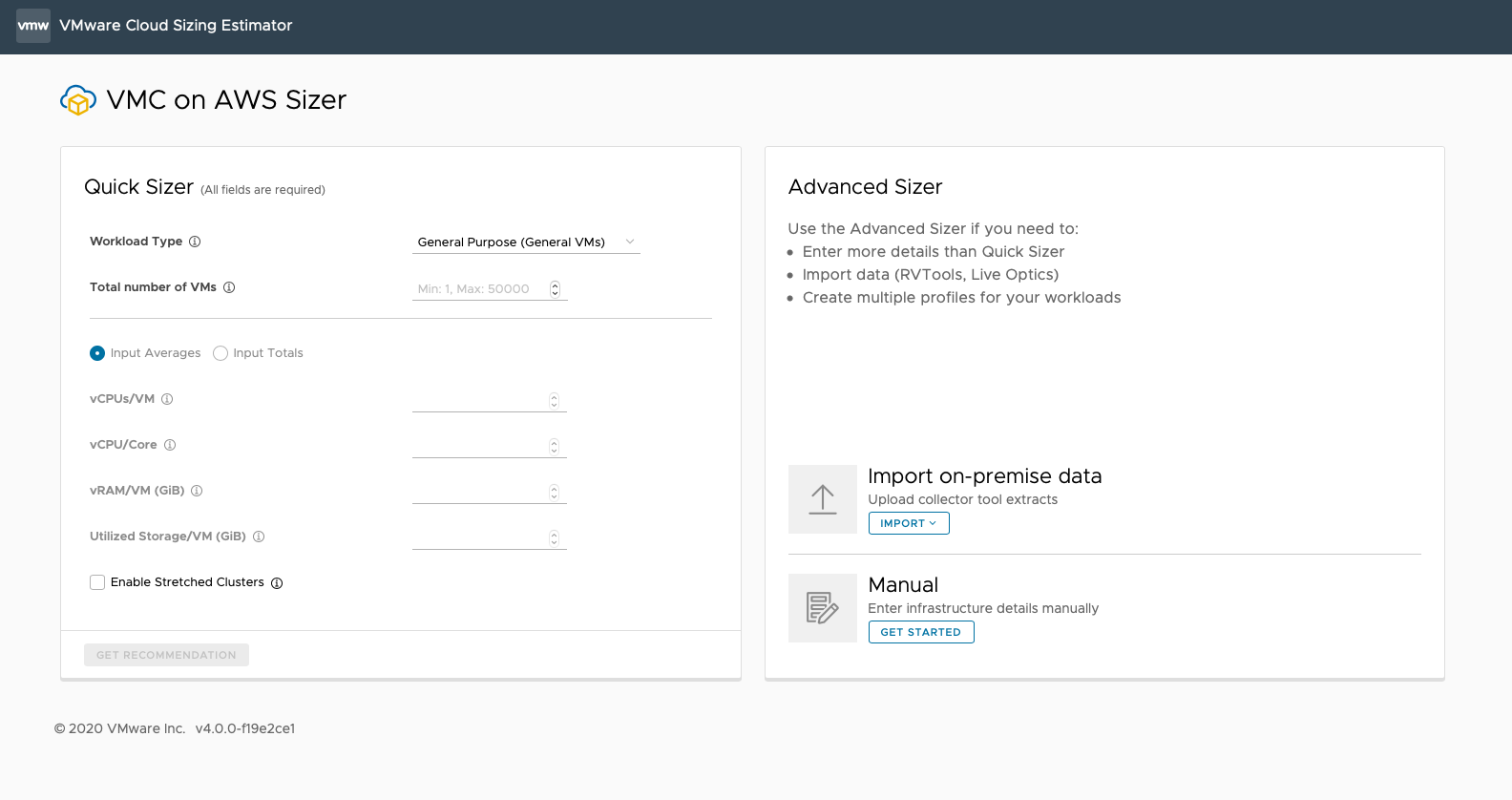 After sizing the OpenShift cluster(s), utilize that information, in addition to any other workload planned for the environment, as inputs for the VMC Sizer tool.

Below is an example output, this output can be easily exported into a PDF report if required.

The recommendation which is provided can be toggled between 2 different physical host types which are available in VMware Cloud on AWS:

Refer to the OpenShift documentation for details about the prerequisites to deploying using full-stack automation with VMware vSphere.

You will need the following configured in the VMC environment prior to OpenShift deployment:

Below is an example rule allowing access from our OpenShift compute network to the vCenter on the Management Gateway.

You will need the following information to deploy OpenShift:

Once the above prerequisites have been met, install OpenShift using the openshift-install command from the bastion mangement host, co-located in the VMC environment. The installer and control plane will automate the process of deploying and managing the resources needed for the OpenShift cluster.

Note: If you want to customize default settings used in the install-config.yaml before the cluster is deployed, such as the ServiceNetwork, run the below command and review the configuration file before running the above create cluster”` command.

After deploying OpenShift to VMware Cloud on AWS, there are a few post-install steps to take to complete the integration between OpenShift and vSphere.

The OpenShift installer will deploy and configure the in-tree volume provisioner using the credentials and datastore provided in install-config.yaml. To maximize the storage capabilities and vCenter integration, it is recommended you deploy the VMware Cloud Native Storage (CNS) provisioner. The steps below walk through the process.

To reduce OpenShift entitlement requirements, and control resources assigned to OpenShift services, it is recommended to create an infrastructure node MachineSet for the router, registry, and metrics services.

The documentation explains how to size the nodes responsible for hosting the router, registry, and metrics services. Once you have decided on the size of the virtual machines, use the documentation to create a custom MachineSet and migrate these three services to the new hosts.

Note: If you are deploying and using the OpenShift logging service, configure the components to deploy to the infrastructure nodes as well.

OpenShift will automatically deploy and destroy virtual machines to scale cluster compute resources based on workload after configuring the ClusterAutoscaler and MachineAutoscaler for your MachineSet(s).

A MachineAutoscaler defines the minimum and maximum number of nodes for a specific MachineSet which the cluster will scale up, or scale down, to accommodate the application workload.

A ClusterAutoScaler defines the minimum and maximum number of nodes in the entire cluster, which will be the sum of all machines deployed from each of the MachineSets defined.

Each of these objects must be defined before OpenShift will automatically scale the cluster. Follow the documentation for setting the values based on your expected workload. Note that MachineAutoscalers must have a value greater than or equal to one (1) for the minReplicas.

Because default parameters are used, the collector runs as a daemonset and uses example-wavefrontproxy as a sink. The collector auto-discovers the pods and services that expose metrics and dynamically starts collecting metrics for the targets. Metrics will also be collected from the kubernetes API server if configured.

Once the collector is running, connect to the Wavefront UI, select the “Kubernetes” tile and then the “Dashboards” tab. 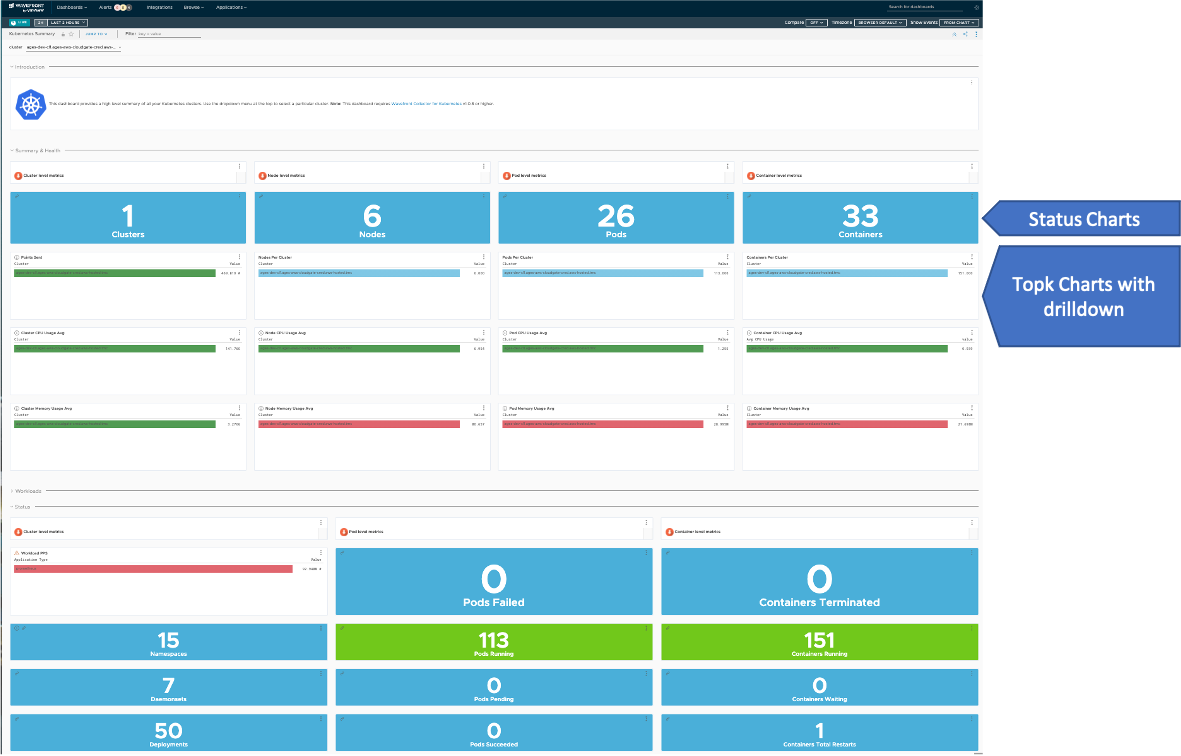 The ‘Kubernetes Summary’ dashboard as shown below: 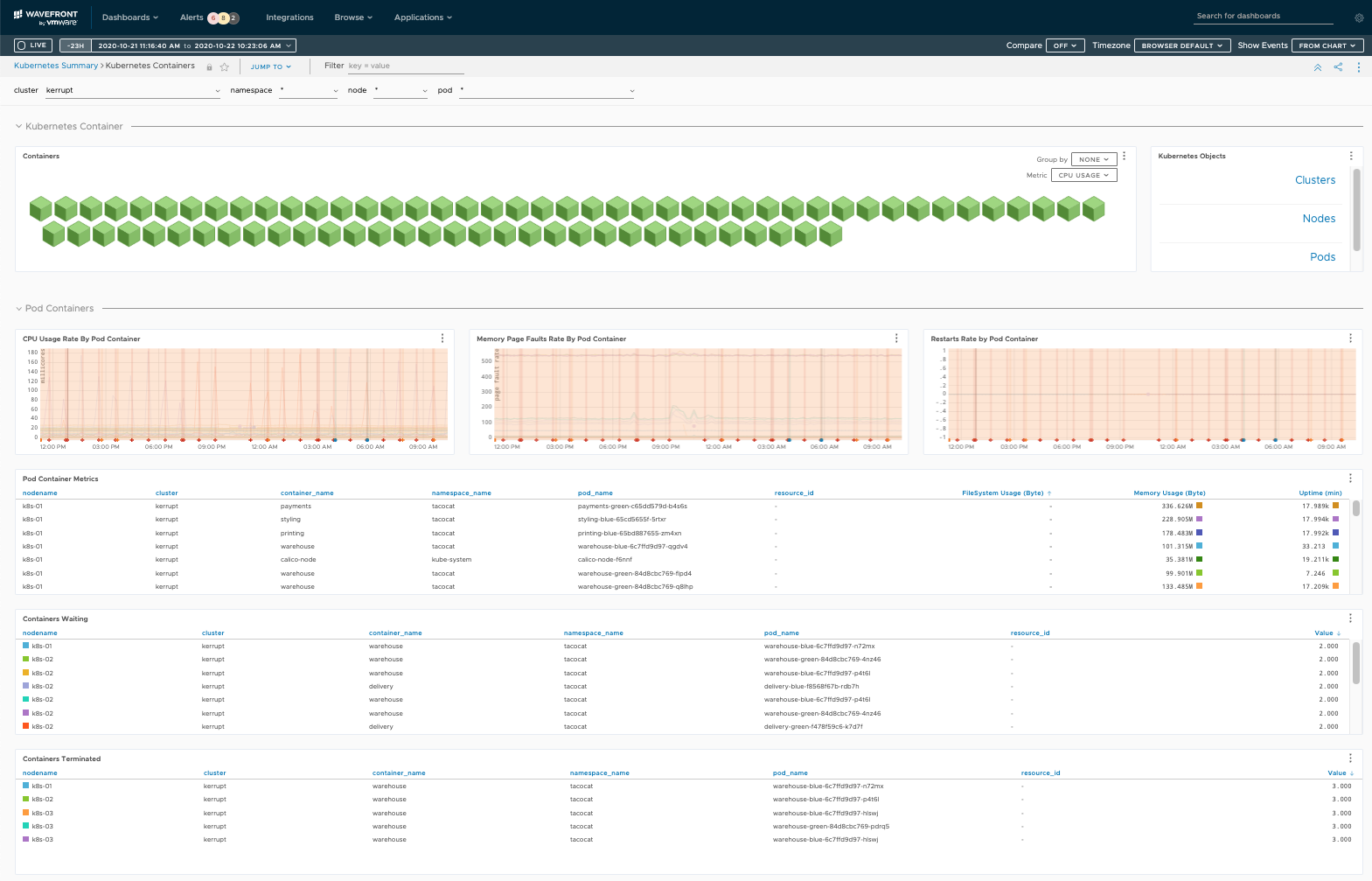 The Wavefront Operator and combined Wavefront Kubernetes Dashboard provides a near real time view of the OpenShift cluster running on VMC. Typically, this dashboard would be customised based on operational requirements.

The OpenShift documentation has extensive guidance on additional, optional, configuration which is done post-deployment. You should carefully review and consider which configuration is appropriate for your cluster based on the user and application requirements.

A subset of the tasks found in the OpenShift documentation include:

This document provides guidelines for successfully deploying OpenShift using the full-stack automation experience to VMware Cloud on AWS hosted vSphere clusters, including integration between the platforms where possible. Deploying Red Hat OpenShift to VMware Cloud on AWS provides a robust and scalable application platform which enables applications to be deployed and managed both on-premises and off-premises, across the hybrid cloud, with common automation and knowledge sets. OpenShift clusters seamlessly scale to accommodate application workloads while VMware on AWS clusters scale to meet the needs of OpenShift and the other virtualized applications in your organization delivering the best of both worlds from an application and infrastructure platform.