The default firewall mechanism in the 2.4 and later kernels is iptables, but iptables cannot be used if ipchains is already running. If ipchains is present at boot time, the kernel issues an error and fails to start iptables.
The functionality of ipchains is not affected by these errors. 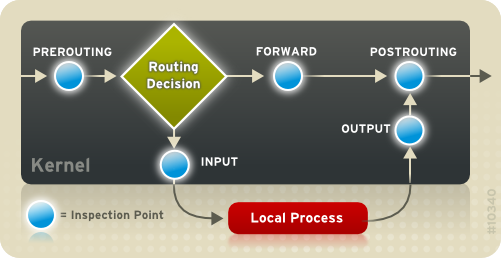 By default, firewall rules are saved in the /etc/sysconfig/iptables or /etc/sysconfig/ip6tables files.
The iptables service starts before any DNS-related services when a Linux system is booted. This means that firewall rules can only reference numeric IP addresses (for example, 192.168.0.1). Domain names (for example, host.example.com) in such rules produce errors.
Regardless of their destination, when packets match a particular rule in one of the tables, a target or action is applied to them. If the rule specifies an ACCEPT target for a matching packet, the packet skips the rest of the rule checks and is allowed to continue to its destination. If a rule specifies a DROP target, that packet is refused access to the system and nothing is sent back to the host that sent the packet. If a rule specifies a QUEUE target, the packet is passed to user-space. If a rule specifies the optional REJECT target, the packet is dropped, but an error packet is sent to the packet's originator.
Every chain has a default policy to ACCEPT, DROP, REJECT, or QUEUE. If none of the rules in the chain apply to the packet, then the packet is dealt with in accordance with the default policy.
The iptables command configures these tables, as well as sets up new tables if necessary.

The netfilter modules are not loaded by default. Therefore a user will not see all of them by looking in the /proc/ directory as it only shows what is being used or has been loaded already. This means that there is no way to see what features of netfilter are available before you attempt to use it.