What Is Extended Update Support (EUS)?

What Customer Use Cases Benefit from Using EUS?

To obtain the maximum benefits maintenance benefits from a Red Hat Enterprise Linux subscription, it is recommended practice for customers to upgrade to each minor release as they are released (e.g., 8.0 --> 8.1 --> 8.2).

Like all Red Hat Enterprise Linux maintenance, EUS is delivered via Red Hat Subscription Manager, where it is implemented as a mirror repository hierarchy (separate repository(s), for each minor release, along with the relevant set of child repositories).

With the introduction of Red Hat Enterprise Linux 8, content is distributed through the two main repositories: BaseOS and AppStream.

Content in the BaseOS repository is intended to provide the core set of the underlying OS functionality that provides the foundation for all installations. This content is available in the RPM format and is subject to support terms similar to those in previous releases of Red Hat Enterprise Linux.

Content in the AppStream repository includes additional user space applications, runtime languages, and databases in support of the varied workloads and use cases. Content in AppStream is available in one of two formats - the familiar RPM format and an extension to the RPM format called modules.

EUS can be activated for individual systems by subscribing them to the matching EUS repository(s).

When you purchase a subscription to a product, RHSM tracks which system(s) in your inventory are registered to the subscription. Registered systems are entitled to support services, as well as errata, patches, and upgrades from the Content Delivery Network (CDN).

Red Hat Enterprise Linux 8 minor releases that include EUS are planned to release based on the below planning schedule. Customers requiring longer maintenance should plan based on the below schedule per the RHEL Life Cycle Policy 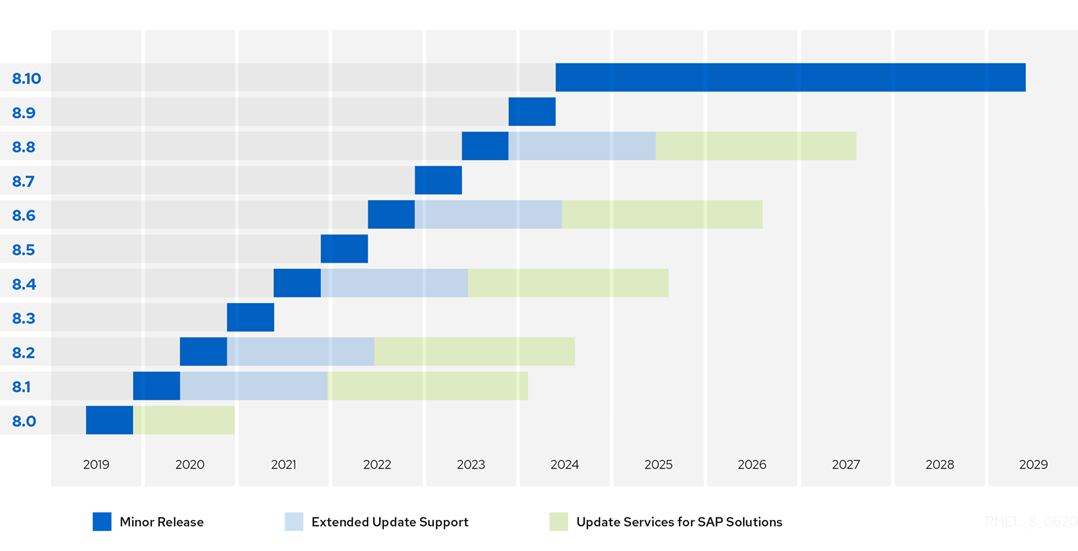 The RHEL EUS release repository receives all ALL security, bugfix, and enhancement errata until the next minor release is released. Afterwards, it only receives the selected backports as per the EUS inclusion policy.

For a given RHEL minor release EUS repository (for example RHEL 8.1), like all EUS repositories, will be retired 24 months after it is created and becomes available via Red Hat Subscription Manager. When an EUS repository reaches retirement, no new errata are released to the repositories. However, all previously released errata remain available to customers with an active subscription. It is imperative to migrate to a later EUS release to continue receiving errata updates like security and bug-fix errata. You can check to see which EUS repositories have been retired and are no longer receiving updates by looking at the Red Hat Enterprise Linux Retired Life Cycle Dates page.

More information on EUS and the Red Hat Enterprise Linux Life Cycle can be found on the Red Hat Customer Portal.

Visit the Red Hat Customer Portal for more information regarding Red Hat Enterprise Linux subscriptions and base and child repositories.

While EUS provides a more restrictive selection of errata, it does not provide an operational framework or discipline as to how a user of EUS can implement an errata management solution to support a rigid life cycle for their Red Hat Enterprise Linux systems. This is covered in the Red Hat Satellite Content Management Guide.

"Following the next minor release, an EUS channel is practically restricted to Critical-impact security advisories and urgent-priority bug fixes."

In other words, the security updates are provided at Red Hat's discretion, much like the policy for the Production 3 Phase found in the Life Cycle article. Wonder if the statement "provide secure environment" still holds true in these cases.

Your statement, "In other words, the security updates are provided at Red Hat's discretion" is not accurate. You may have overlooked the reference in the Life Cycle document that takes you to the Issue Severity Classification reference which clearly explains how Red Hat determines its Impact rating based on the well respected and independent vulnerability entities MITRE and NVD. So the decision is based on solid evaluation and input from outside resources. I suspect your own security team regularly refers to those industry sources for security information as well. Another good resource is Backporting Security Fixes.

The bottom line is that in order to keep up with the rapid innovation provided by the Open Source development models, Red Hat must continually move forward. Upstream develops on upstream. It is a tremendous amount of work to take a security fix to new upstream code, and modify that to work on a 3 year old code base. Therefore, Red Hat is a balance between the rapid upstream and the predictable update models needed by enterprise and businesses.

It is advised not to think of the minor releases, but rather patch bundles. Do not hesitate to update with a regularly scheduled update cycle. True, it is not always perfect as occasionally there is a regression or compatibility issue between new drivers and firmware. However, these same issues are eventually experienced anyway by those customers who do not update regularly and are compounded by minor release version jumping (i.e. 6.2 -> 6.6).

Extended Update Support (EUS), along with Extended Lifecycle Support (ELS) are both meant to be a stop-gap option, providing a bridge until the minor release update can take place.

Our customers who succeed best have regular patching schedules and make a planned effort to stay as current as possible. This discussion is rarely an issue for them and they maintain a very stable and secure platform. I work with many accounts, including financial and embedded telecom. I speak from experience when I say that those customers who struggle the most do not patch regularly and remain on non-current minor releases for long periods of time.

I hope this is helpful to you in understanding our Life Cycle and our security ratings. Please post any followup questions.

Thanks for your detailed note. There is one thing I'd like to add about the wording. The "at Red Hat's discretion" part is not my creation. I copied it from the 'Life Cycle' document, note number 11:

So my understanding is this:

EUS is provided as either:

Let's take a look a the EUS add-on for example:

As you can see in the above, the EUS add-on provides EUS content only. (Which makes a whole lot of sense)

In this subscription, EUS content AND RHEL content is provided. The only way you'd get access to both EUS and RHEL is either by attaching 2 distinct subs (EUS & RHEL), or one sub, similar to the one above that provides both.

As far as repos are concerned, you are correct in the statement that you should use only one of either the non-EUS version or the EUS version of a repo.

When we buy a Subscription, why can't we get a list of repositories that is included? Just got surprised. We have to use specific repos but they are not included in the EUS addon included in the premium subscription. The recent Spectre and Meltdown revelations certainly provide ample severity.

Can you be more specific on what is missing? Which RHEL subscription do you have? What version are you running?

You totally can. Take a look in the portal under subscriptions -> 'NAME OF YOUR SUB' -> Content. Example here

How do you actually lock your release on a minor version and subscribe to EUS: How to tie a system to a specific update of Red Hat Enterprise Linux? .

Can someone from Red Hat provide clarification on how non-base repositories (eg. optional repository) are handled in the EUS lifecycle? Are the additional repos such as 'optional' covered by EUS, if so, is it all additional repos or just a selection?

Yes, optional repositories are included in the EUS.

The end date for RHEL 7.7 EUS appears to be incorrect on the following page:
https://access.redhat.com/support/policy/updates/errata

Exactly the information I was after.

Thanks for the quick response Julio!

Hi, As I understand correctly EUS 7.7 will be final EUS for RHEL 7. Support of it ends August 30, 2021, but RHEL 7 Maintenance ends at June 30, 2024. What possibilities do we have then to have EUS functionality (to stay at minor level for 24 months since release) for remaining 3 years of RHEL 7 support?

Adam, we have also announced via the Life-cycle Dates section [1] of that RHEL Life Cycle page that RHEL 7.9 will be the last minor release of RHEL 7. So your option is to stay on RHEL 7.7 EUS until RHEL 7.9 is released and then updated to RHEL 7.9 and you will be able to stay on it until RHEL 7 reaches its end of Maintenance Support 2 phase on June 30, 2024.

Are you sure you want to update a translation? It seems an existing Japanese Translation exists already. We appreciate your interest in having Red Hat content localized to your language. Please note that excessive use of this feature could cause delays in getting specific content you are interested in translated.