Session replication ensures that client sessions of distributable applications are not disrupted by failovers of nodes in a cluster. Each node in the cluster shares information about ongoing sessions, and can take over sessions if a node disappears.

6.1.2. Enable Session Replication in Your Application

To take advantage of JBoss EAP High Availability (HA) features and enable clustering of your web application, you must configure your application to be distributable.

The <replication-granularity> parameter determines the granularity of data that is replicated. It defaults to SESSION, but can be set to ATTRIBUTE to increase performance on sessions where most attributes remain unchanged.

Valid values for <replication-granularity> can be :

For JBoss EAP7, session replication is triggered when the session is mutated or when any mutable attribute of the session is accessed. Session attributes are assumed to be mutable unless one of the following is true:

6.2.1. About HTTP Session Passivation and Activation

Passivation is the process of controlling memory usage by removing relatively unused sessions from memory while storing them in persistent storage.

Activation is when passivated data is retrieved from persisted storage and put back into memory.

Passivation occurs at different times in an HTTP session’s lifetime:

A session is passivated if the number of active sessions exceeds a configurable maximum.

JBoss EAP 7 introduces a refined public clustering API for use by applications. The new services are designed to be lightweight, easily injectable, with no external dependencies.

The group service provides a mechanism to view the cluster topology for a JGroups channel, and to be notified when the topology changes.

The CommandDispatcherFactory service provides a mechanism to create a dispatcher for executing commands on nodes in the cluster. The resulting CommandDispatcher is a command-pattern analog to the reflection-based GroupRpcDispatcher from previous JBoss EAP releases.

When the master node either fails or shuts down, another master is selected from the remaining nodes and the service is restarted on the new master. Other than a brief interval when one master has stopped and another has yet to take over, the service is provided by one, but only one, node.

The SingletonServiceBuilder implementation installs its services so they will start asynchronously, preventing deadlocking of the Modular Service Container (MSC).

If there is a preference for which node should start the ha-singleton, you can set the election policy in the ServiceActivator class.

The following is an abbreviated example of the steps required to create and deploy an application as a cluster-wide singleton service. This example service activates a scheduled timer that is started only once in the cluster.

See the cluster-ha-singleton quickstart that ships with JBoss EAP for a complete working example of this application. The quickstart provides detailed instructions to build and deploy the application.

JBoss EAP 7 adds the ability to deploy a given application as a singleton deployment.

The policies for controlling HA singleton behavior are managed by a new singleton subsystem. A deployment may either specify a specific singleton policy or use the default subsystem policy. A deployment identifies itself as singleton deployment via a /META-INF/singleton-deployment.xml deployment descriptor which is most easily applied to an existing deployment as a deployment overlay. Alternatively, the requisite singleton configuration can be embedded within an existing jboss-all.xml.

Defining or Choosing a Singleton Deployment

Additionally, any singleton election policy may indicate a preference for one or more members of a cluster. Preferences may be defined either via node name or via outbound socket binding name. Node preferences always take precedent over the results of an election policy.

Example: Create a New Singleton Policy with a simple-election-policy and name-preferences, Using the Management CLI

To set the newly created policy my-new-policy as the default, run this command:

The mod_cluster-manager application is an administration web page, which is available on Apache HTTP Server. It is used for monitoring the connected worker nodes and performing various administration tasks, such as enabling or disabling contexts, and configuring the load-balancing properties of worker nodes in a cluster.

The mod_cluster-manager application can be used for performing various administration tasks on worker nodes. 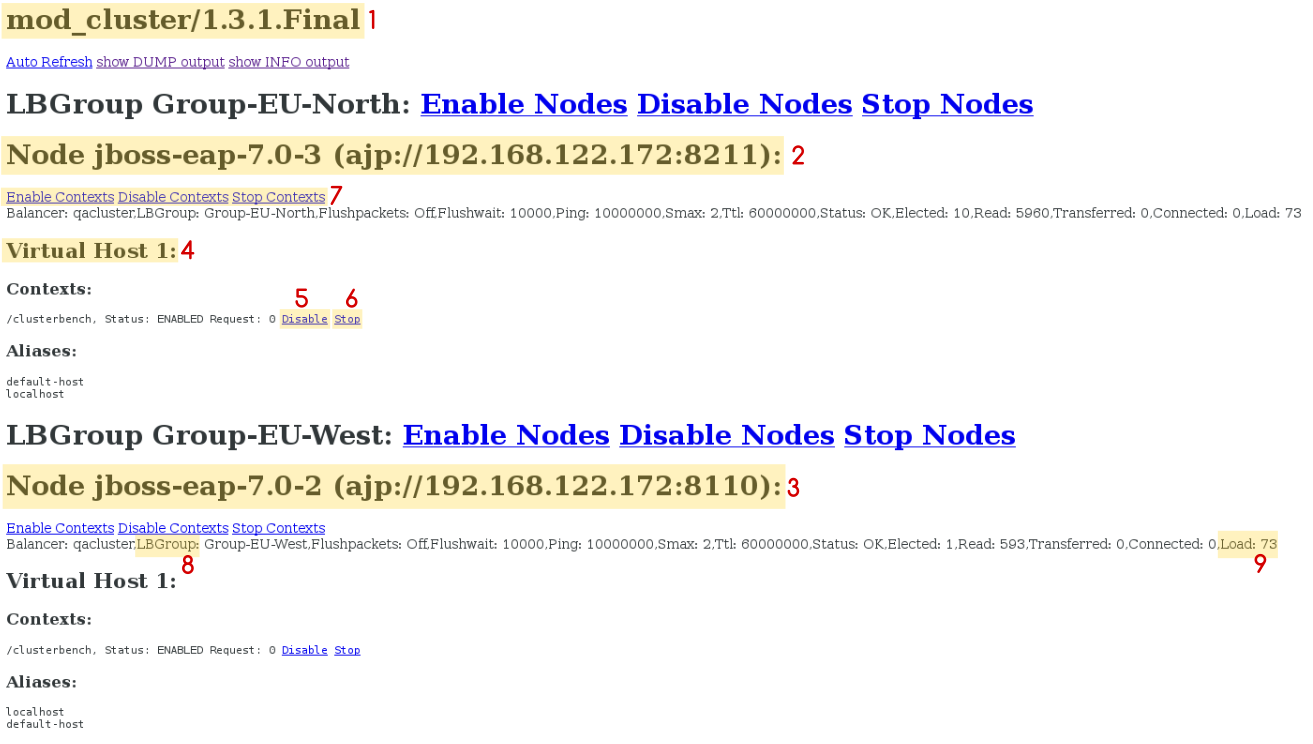 For JBoss EAP 7.0, it is also possible to use Undertow as load balancer.