One of the most effective ways to manage the functionality, features, and performance of a virtual machine (VM) is to adjust its virtual devices.

The following sections provide a general overview of what virtual devices are, and instructions on how they can be attached, modified, or removed from a VM.

Just like physical machines, virtual machines (VMs) require specialized devices to provide functions to the system, such as processing power, memory, storage, networking, or graphics. Physical systems usually use hardware devices for these purposes. However, because VMs work as software implements, they need to use software abstractions of such devices instead, referred to as virtual devices.

Virtual devices attached to a VM can be configured when creating the VM, and can also be managed on an existing VM. Generally, virtual devices can be attached or detached from a VM only when the VM is shut off, but some can be added or removed when the VM is running. This feature is referred to as device hot plug and hot unplug.

When creating a new VM, libvirt automatically creates and configures a default set of essential virtual devices, unless specified otherwise by the user. These are based on the host system architecture and machine type, and usually include:

For some types of devices, RHEL 8 supports multiple implementations, often with a trade-off between performance and flexibility.

For example, the physical storage used for virtual disks can be represented by files in various formats, such as qcow2 or raw, and presented to the VM using a variety of controllers:

The following provides general information about creating and attaching virtual devices to your virtual machines (VMs) using the command-line interface (CLI). Some devices can also be attached to VMs using the RHEL 8 web console.

To verify the device has been added, do any of the following:

The following procedure provides general instructions for modifying virtual devices using the command-line interface (CLI). Some devices attached to your VM, such as disks and NICs, can also be modified using the RHEL 8 web console.

To verify the device has been modified, do any of the following:

For small changes to the XML configuration of your VM, you can use the virsh edit command - for example virsh edit testguest. However, do not use this method for more extensive changes, as it is more likely to break the configuration in ways that could prevent the VM from booting.

The following provides general information for removing virtual devices from your virtual machines (VMs) using the command-line interface (CLI). Some devices, such as disks or NICs, can also be removed from VMs using the RHEL 8 web console.

Virtualization in RHEL 8 can present several distinct types of virtual devices that you can attach to virtual machines (VMs):

However, since they need to faithfully emulate a particular type of hardware, emulated devices may suffer a significant performance loss compared with the corresponding physical devices or more optimized virtual devices.

The following types of emulated devices are supported:

Paravirtualization provides a fast and efficient method for exposing virtual devices to VMs. Paravirtualized devices expose interfaces that are designed specifically for use in VMs, and thus significantly increase device performance. RHEL 8 provides paravirtualized devices to VMs using the virtio API as a layer between the hypervisor and the VM. The drawback of this approach is that it requires a specific device driver in the guest operating system.

The following types of paravirtualized devices are supported:

When attached in this way, some aspects of the physical device are directly available to the VM as they would be to a physical machine. This provides superior performance for the device when used in the VM. However, devices physically attached to a VM become unavailable to the host, and also cannot be migrated.

Nevertheless, some devices can be shared across multiple VMs. For example, a single physical device can in certain cases provide multiple mediated devices, which can then be assigned to distinct VMs.

The following types of passthrough devices are supported:

An emulated virtual device often uses more CPU and memory than a hardware network device. This can limit the performance of a virtual machine (VM). However, if any devices on your virtualization host support Single Root I/O Virtualization (SR-IOV), you can use this feature to improve the device performance, and possibly also the overall performance of your VMs.

Single-root I/O virtualization (SR-IOV) is a specification that enables a single PCI Express (PCIe) device to present multiple separate PCI devices, called virtual functions (VFs), to the host system. Each of these devices:

The SR-IOV functionality is possible thanks to the introduction of the following PCIe functions:

VMs recognize VFs as virtual devices. For example, a VF created by an SR-IOV network device appears as a network card to a VM to which it is assigned, in the same way as a physical network card appears to the host system. 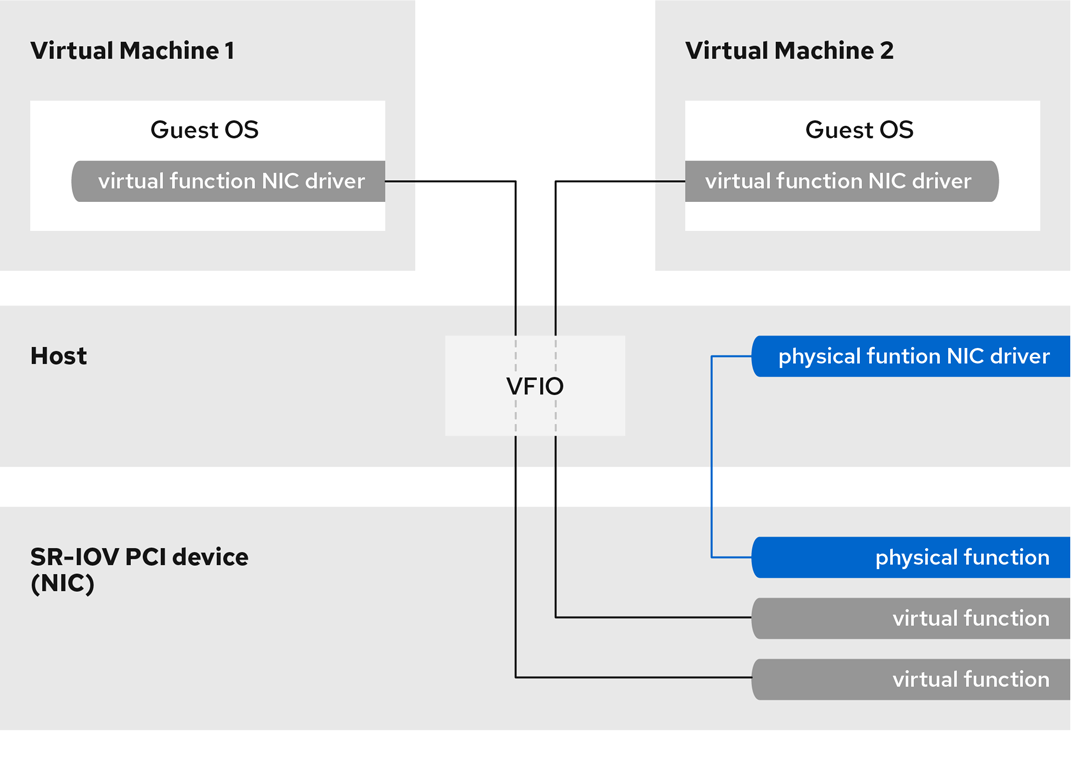 The primary advantages of using SR-IOV VFs rather than emulated devices are:

For example, a VF attached to a VM as a vNIC performs at almost the same level as a physical NIC, and much better than paravirtualized or emulated NICs. In particular, when multiple VFs are used simultaneously on a single host, the performance benefits can be significant.

To attach an SR-IOV networking device to a virtual machine (VM) on an Intel or AMD host, you must create a virtual function (VF) from an SR-IOV capable network interface on the host and assign the VF as a device to a specified VM. For details, see the following instructions.

Not all devices can be used for SR-IOV. The following devices have been tested and verified as compatible with SR-IOV in RHEL 8.