This solution is implemented using a stretch cluster configuration. This means that there is a single RHV environment with a cluster that contains hosts capable of running the required virtual machines in the primary and secondary site. Virtual machines automatically migrate to hosts in the secondary site if an outage occurs. However, the environment must meet latency and networking requirements. See Active-Active Overview for more information.

Also referred to as site-to-site failover, this disaster recovery solution is implemented by configuring two separate RHV environments: the active primary environment, and the passive secondary (backup) environment. Failover and failback between sites must be manually executed, and is managed by Ansible. See Active-Passive Overview for more information.

The active-active disaster recovery failover configuration can span two sites. Both sites are active, and if the primary site becomes unavailable, the Red Hat Virtualization environment continues to operate in the secondary site to ensure business continuity.

The active-active failover configuration includes a stretch cluster in which hosts capable of running the virtual machines are located in both the primary and secondary sites. All the hosts belong to the same Red Hat Virtualization cluster.

This configuration requires replicated storage that is writeable on both sites so virtual machines can migrate between the two sites and continue running on both sites' storage. 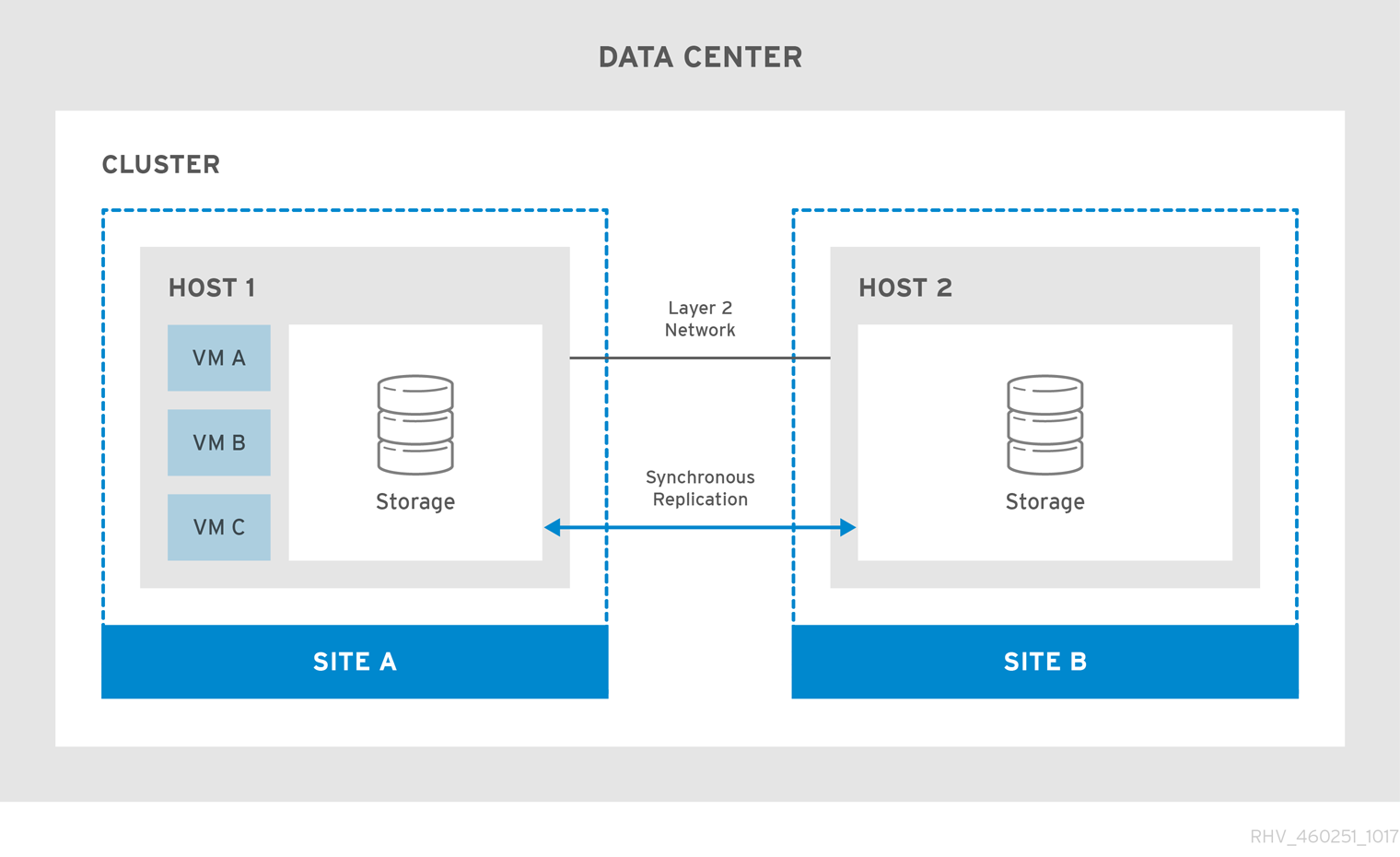 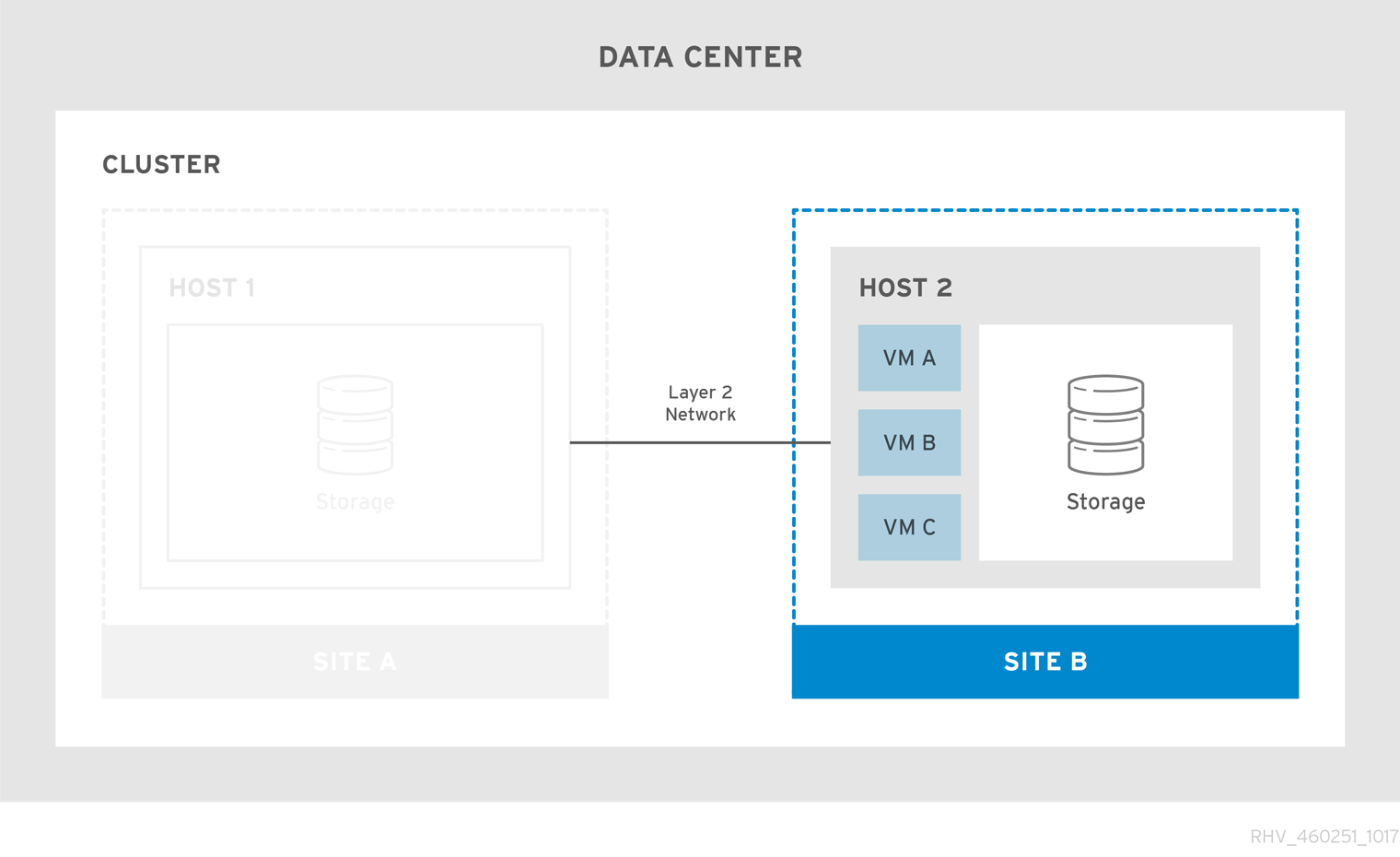 The stretched cluster configuration can be implemented using a self-hosted engine environment, or a standalone Manager environment. For more information about the different types of deployments see Red Hat Virtualization Architecture in the Product Guide.

All hosts in the cluster must be on the same broadcast domain over an L2 network. So connectivity between the two sites must be L2.

The sites require synchronously replicated storage that is writeable on both sites with shared layer 2 (L2) network connectivity. The replicated storage is required to allow virtual machines to migrate between sites and continue running on the site’s storage. All storage replication options supported by Red Hat Enterprise Linux 7 and later can be used in the stretch cluster.

If you have a custom multipath configuration that is recommended by the storage vendor, see the instructions and important limitations in Customizing Multipath Configurations for SAN Vendors.

In such a scenario virtual machines do a failover, but operations that require the SPM role in place cannot be executed, including adding new disks, extending existing disks, and exporting virtual machines.

To restore full functionality, detect the actual nature of the disaster and after fixing the root cause and rebooting the SPM host, select Confirm 'Host has been Rebooted' for the SPM host.

Manually Fencing or Isolating a Non-Responsive Host in the Administration Guide.

The active-active failover can be manually performed by placing the main site’s hosts into maintenance mode.

The standalone Manager is only highly available when managed externally. For example:

The active-active failover can be manually performed by placing the main site’s hosts into maintenance mode.

The failover is achieved by configuring a Red Hat Virtualization environment in the secondary site, which requires:

The following diagram describes an active-passive setup where the machine running Red Hat Ansible Engine is highly available, and has access to the oVirt.disaster-recovery Ansible role, configured playbooks, and mapping file. The storage domains that store the virtual machine disks in Site A is replicated. Site B has no virtual machines or attached storage domains. 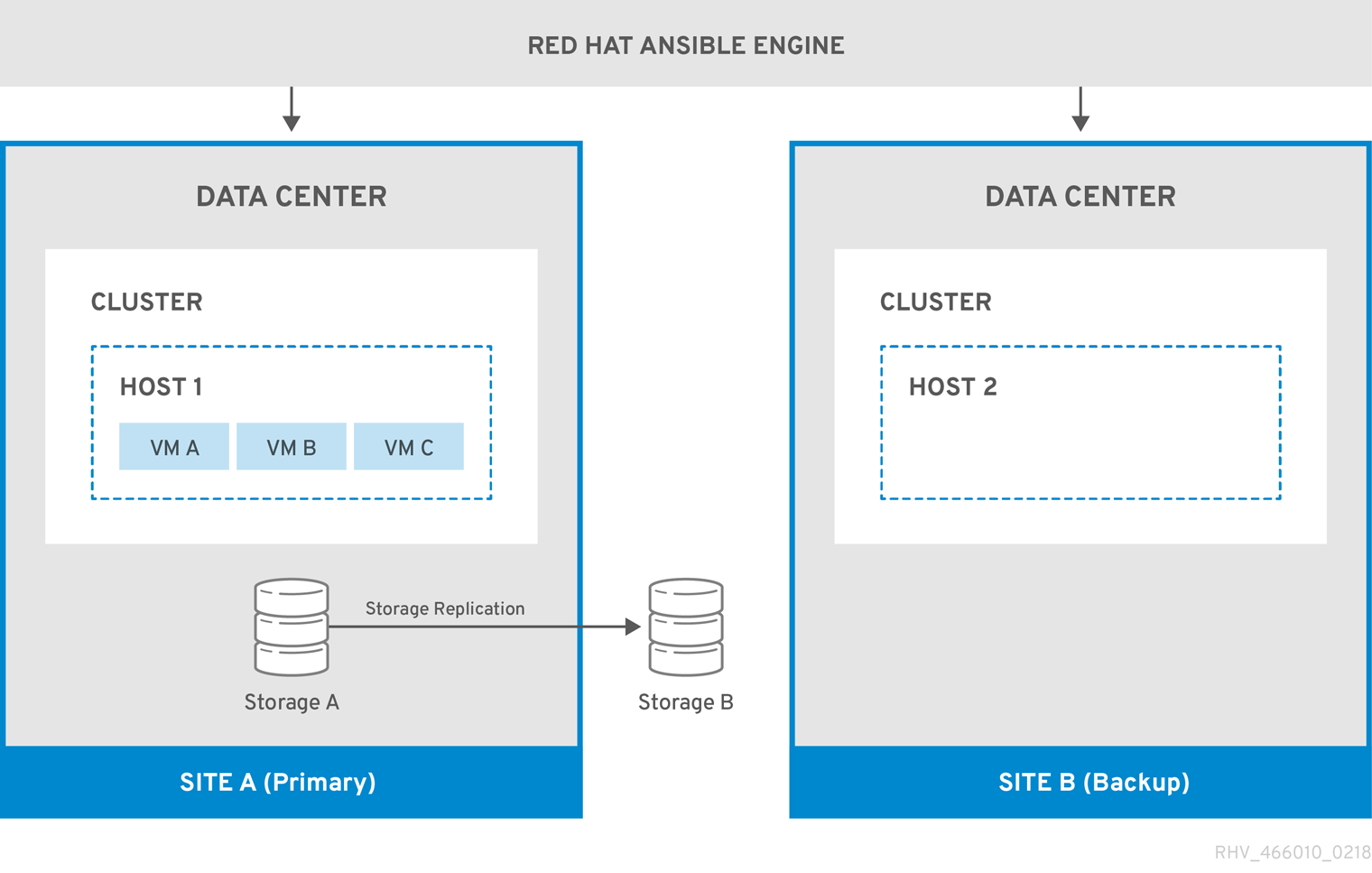 When the environment fails over to Site B, the storage domains are first attached and activated in Site B’s data center, and then the virtual machines are registered. Highly available virtual machines will fail over first. 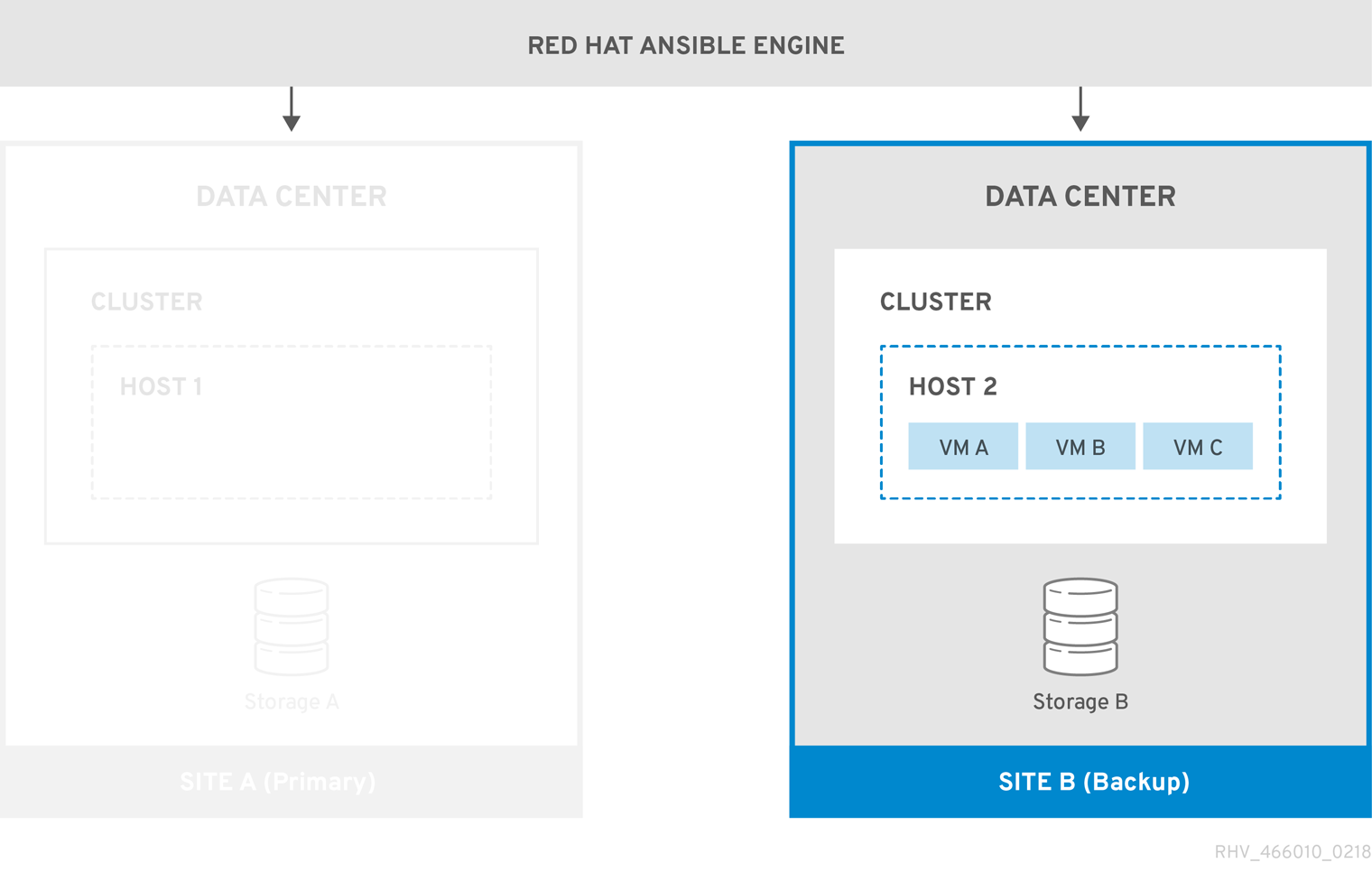 You must manually fail back to the primary site (Site A) when it is running again.

You must ensure that the same general connectivity exists in the primary and secondary sites.

If you have multiple networks or multiple data centers then you must use an empty network mapping in the mapping file to ensure that all entities register on the target during failover. See Mapping File Attributes for more information.

A primary and secondary storage replica is required. The primary storage domain’s block devices or shares that contain virtual machine disks or templates must be replicated. The secondary storage must not be attached to any data center, and will be added to the backup site’s data center during failover.

All storage solutions that have replication options that are supported by Red Hat Enterprise Linux 7 and later can be used.

Ansible is used to initiate and manage the disaster recovery failover and failback. So you must create Ansible playbooks to facilitate this. For more information about creating Ansible playbooks, see the Ansible documentation.

It is also recommended to create environment properties that exist in the primary site, such as affinity groups, affinity labels, users, on the secondary site.

The default behaviour of the Ansible playbooks can be configured in the /usr/share/ansible/roles/oVirt.disaster-recovery/defaults/main.yml file.

The following playbooks must be created:

You can also create an optional playbook to clean the primary site before failing back.

Create the playbooks and associated files in /usr/share/ansible/roles/oVirt.disaster-recovery/ on the Ansible machine that is managing the failover and failback. If you have multiple Ansible machines that can manage it, ensure that you copy the files to all of them.

You can test the configuration using one or more of the testing procedures in Testing the Active-Passive Configuration.

3.4.1. The ovirt-dr Script for Ansible Tasks

This script is located in /usr/share/ansible/roles/oVirt.disaster-recovery/files

You can set the parameters for the script’s actions in the configuration file, /usr/share/ansible/roles/oVirt.disaster-recovery/files/dr.conf.

You can change the location of the configuration file with the --conf-file option.

You can set the location and level of logging detail with the --log-file and --log-level options.

3.4.2. Creating the Playbook to Generate the Mapping File

The Ansible playbook used to generate the mapping file will prepopulate the file with the target (primary) site’s entities. You then must manually add the backup site’s entities, such as IP addresses, cluster, affinity groups, affinity label, external LUN disks, authorization domains, roles, and vNIC profiles, to the file.

In this example the Ansible playbook is named dr-rhv-setup.yml, and is executed on the Manager machine in the primary site.

If you have multiple Ansible machines that can perform the failover and failback, then copy the mapping file to all relevant machines.

3.4.3. Create the Failover and Failback Playbooks

Ensure that you have the mapping file that you created and configured, in this case disaster_recovery_vars.yml, because this must be added to the playbooks.

You can define a password file (for example passwords.yml) to store the Manager passwords of the primary and secondary site. For example:

For extra security you can encrypt the password file. However, you must use the --ask-vault-pass parameter when running the playbook. See Using Ansible Roles to Configure Red Hat Virtualization in the Administration Guide for more information.

In these examples the Ansible playbooks to fail over and fail back are named dr-rhv-failover.yml and dr-rhv-failback.yml.

Create the following Ansible playbook to failover the environment:

Create the following Ansible playbook to failback the environment:

3.4.4. Create the Playbook to Clean the Primary Site

Before you fail back to the primary site, you must ensure that the primary site is cleaned of all storage domains to be imported. You can do so manually on the Manager, or optionally you can create an Ansible playbook to do it for you.

Sanlock must release all storage locks from the replicated storage domains before the failover process starts. These locks should be released automatically approximately 80 seconds after the disaster occurs.

After you fail over, you must clean the environment in the primary site before failing back to it:

This example uses the dr-cleanup.yml playbook created earlier to clean the environment.

Once you fail over, you can fail back to the primary site when it is active and you have performed the necessary steps to clean the environment.

The following table describes the attributes in the mapping file that is used to fail over and fail back between the two sites in an active-passive disaster recovery solution.

Appendix B. Testing the Active-Passive Configuration

Ensure that you completed all the steps to configure your active-passive configuration before running any of these tests.

This test will not allow you to test the failback functionality.

Ensure that no production tasks are performed after the failover. For example, ensure that email systems are blocked from sending emails to real users, or redirect emails elsewhere. If systems are used to directly manage other systems, prohibit access to the systems or ensure that they access parallel systems in the secondary site.

Restoring the environment to its active-passive state:

B.2. Discreet Failover and Failback Test

B.3. Full Failover and Failback test

This test performs a full failover and failback between the primary and secondary site. You can simulate the disaster by shutting down the primary site’s hosts or by adding firewall rules to block writing to the storage domains.

Licensed under the (Creative Commons Attribution–ShareAlike 4.0 International License). Derived from documentation for the (oVirt Project). If you distribute this document or an adaptation of it, you must provide the URL for the original version.

Linux® is the registered trademark of Linus Torvalds in the United States and other countries.

Java® is a registered trademark of Oracle and/or its affiliates.

XFS® is a trademark of Silicon Graphics International Corp. or its subsidiaries in the United States and/or other countries.

MySQL® is a registered trademark of MySQL AB in the United States, the European Union and other countries.

Node.js® is an official trademark of Joyent. Red Hat Software Collections is not formally related to or endorsed by the official Joyent Node.js open source or commercial project.

All other trademarks are the property of their respective owners.