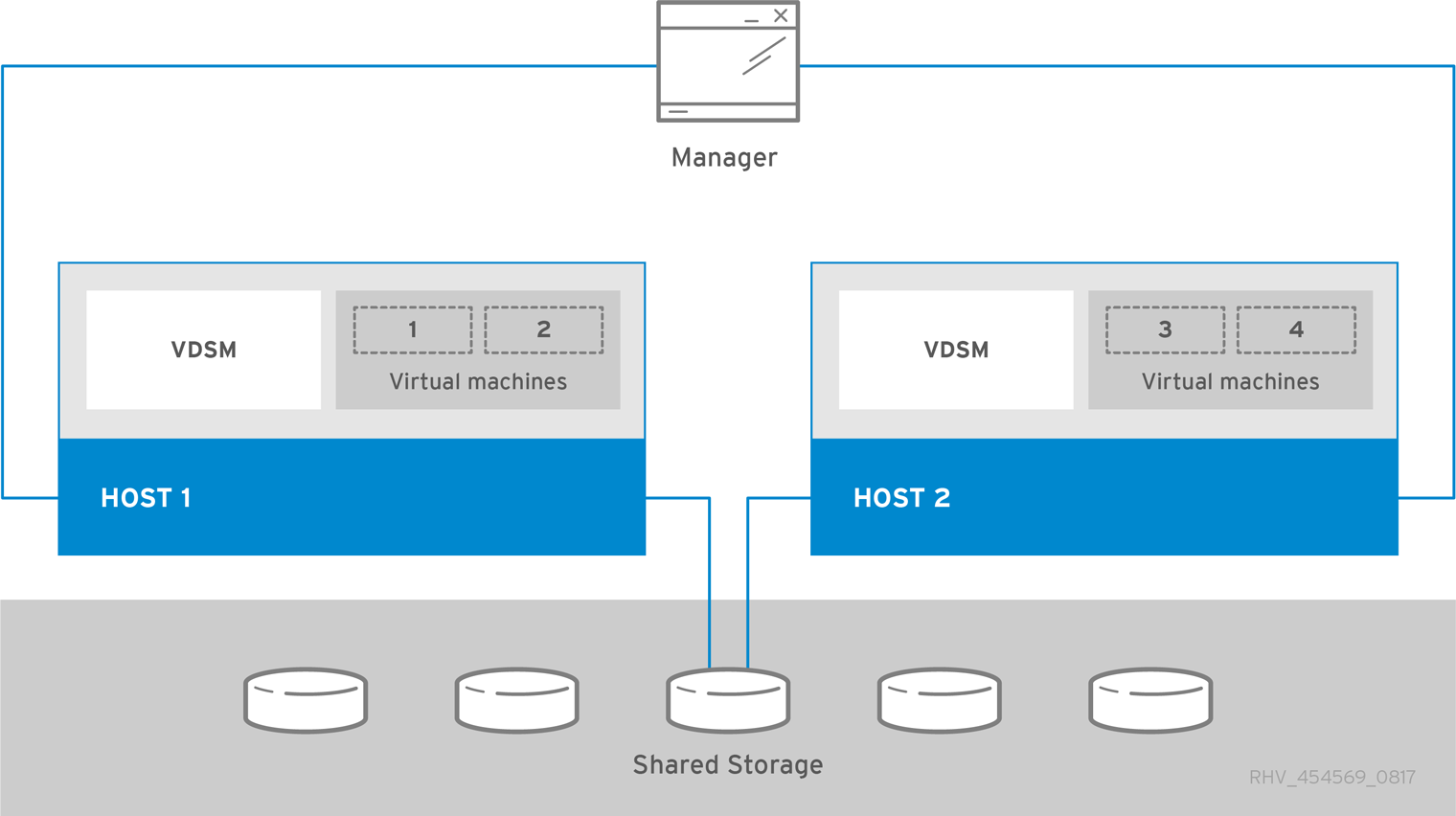 You should install at least two hosts and attach them to the Red Hat Virtualization environment. If you attach only one host, you cannot access features such as migration and high availability.

The Red Hat Virtualization Manager includes a data warehouse that collects monitoring data about hosts, virtual machines, and storage. Data Warehouse, which includes a database and a service, must be installed and configured along with the Manager setup, either on the same machine or on a separate server. 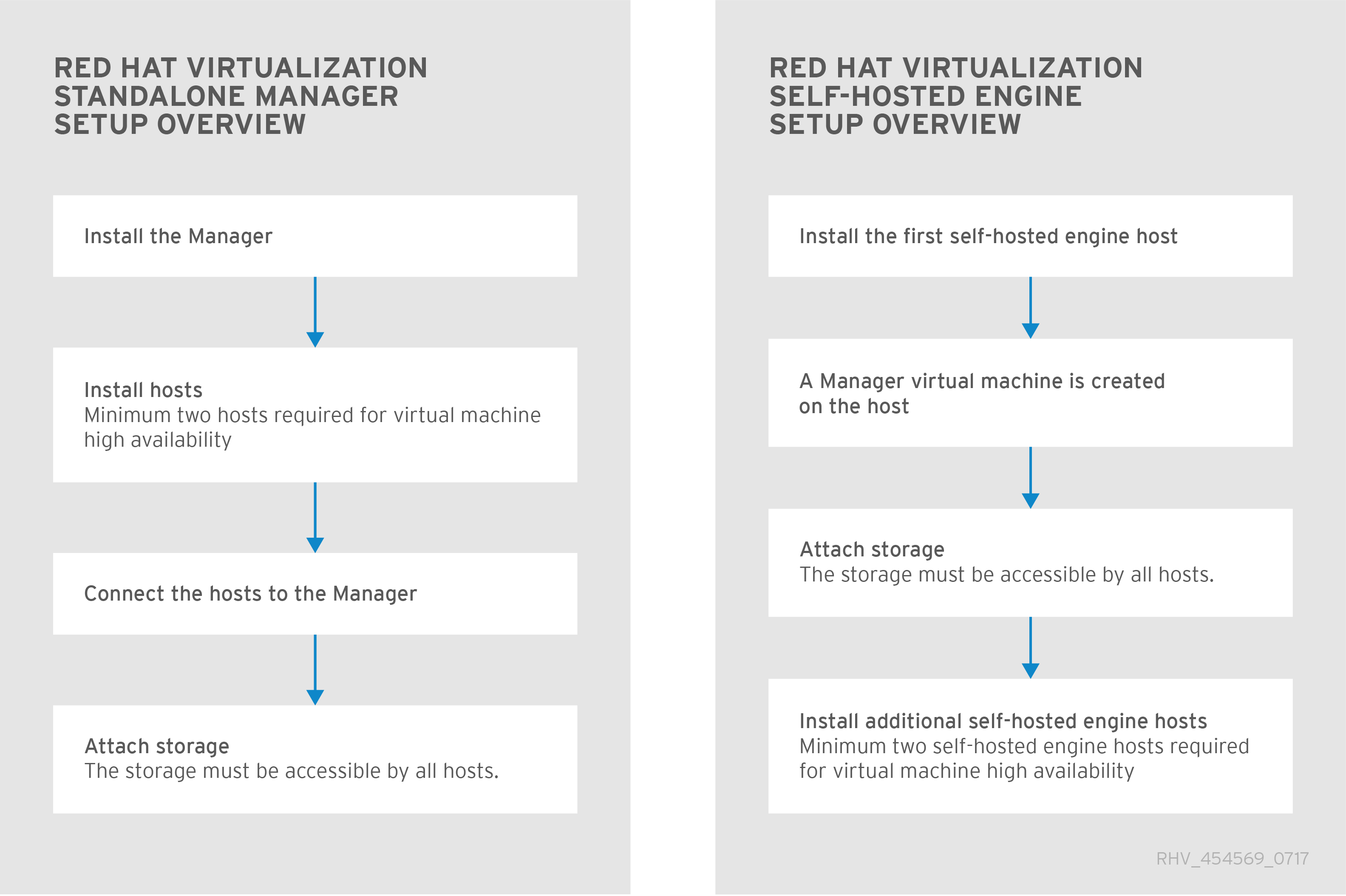 You can install Red Hat Virtualization as a self-hosted engine using the command line.

Because the Manager installation is automated, the Manager database (engine) and Data Warehouse service and database (ovirt-engine-history) can only be installed locally. If you want to host any databases or services on remote machines, you must migrate them after the installation is complete. Instructions for this are included in both of the following guides.

You can only install a standalone Manager using the command line.

During installation, you can specify whether to install the Manager database (engine) and Data Warehouse service and database (ovirt-engine-history) locally or remotely. You do not have to choose the same option for both; one database can be hosted on a remote machine, while the other is hosted on the Manager machine.

Installing one database on the Manager machine and the other database remotely, and the various combinations thereof, is not specifically documented. For example:

Red Hat Virtualization exposes a number of interfaces for interacting with the components of the virtualization environment. Many of these interfaces are fully supported. Some, however, are supported only for read access or only when your use of them has been explicitly requested by Red Hat Support.

The Python and Java are fully supported interfaces for interacting with the Red Hat Virtualization Manager.

See: Administering the Manager Virtual Machine in the Administration Guide.

Direct interaction with these interfaces is not supported unless your use of them is explicitly requested by Red Hat Support :

Red Hat Support will not debug user-created scripts or hooks except where it can be demonstrated that there is an issue with the interface being used rather than the user-created script itself. For more general information about Red Hat’s support policies see Production Support Scope of Coverage.

Licensed under the (Creative Commons Attribution–ShareAlike 4.0 International License). Derived from documentation for the (oVirt Project). If you distribute this document or an adaptation of it, you must provide the URL for the original version.

Linux® is the registered trademark of Linus Torvalds in the United States and other countries.

Java® is a registered trademark of Oracle and/or its affiliates.

XFS® is a trademark of Silicon Graphics International Corp. or its subsidiaries in the United States and/or other countries.

MySQL® is a registered trademark of MySQL AB in the United States, the European Union and other countries.

Node.js® is an official trademark of Joyent. Red Hat Software Collections is not formally related to or endorsed by the official Joyent Node.js open source or commercial project.

All other trademarks are the property of their respective owners.