The way it works is that when a user logs in, Red Hat Single Sign-On will look into its own internal user store to find the user. If it can’t find it there it will iterate over every User Storage provider you have configured for the realm until it finds a match. Data from the external store is mapped into a common user model that is consumed by the Red Hat Single Sign-On runtime. This common user model can then be mapped to OIDC token claims and SAML assertion attributes.

On the center, there is an Add Provider list box. Choose the provider type you want to add and you will be brought to the configuration page of that provider.

If a User Storage Provider fails, that is, if your LDAP server is down, you may have trouble logging in and may not be able to view users in the admin console. Red Hat Single Sign-On does not catch failures when using a Storage Provider to lookup a user. It will abort the invocation. So, if you have a Storage Provider with a higher priority that fails during user lookup, the login or user query will fail entirely with an exception and abort. It will not fail over to the next configured provider.

This storage mode is controled by the Import Users switch. Set to On to import users.

Console Display Name
Name used when this provider is referenced in the admin console
Priority
The priority of this provider when looking up users or adding a user.
Sync Registrations
Does your LDAP support adding new users? Click this switch if you want new users created by Red Hat Single Sign-On in the admin console or the registration page to be added to LDAP.
Allow Kerberos authentication
Enable Kerberos/SPNEGO authentication in realm with users data provisioned from LDAP. More info in Kerberos section.
Other options
The rest of the configuration options should be self explanatory. You can mouseover the tooltips in Admin Console to see some more details about them.

If you have import enabled, the LDAP Provider will automatically take care of synchronization (import) of needed LDAP users into the Red Hat Single Sign-On local database. As users log in, the LDAP provider will import the LDAP user into the Red Hat Single Sign-On database and then authenticate against the LDAP password. This is the only time users will be imported. If you go to the Users left menu item in the Admin Console and click the View all users button, you will only see those LDAP users that have been authenticated at least once by Red Hat Single Sign-On. It is implemented this way so that admins don’t accidentally try to import a huge LDAP DB of users.

LDAP mappers are listeners, which are triggered by the LDAP Provider at various points, provide another extension point to LDAP integration. They are triggered when a user logs in via LDAP and needs to be imported, during Red Hat Single Sign-On initiated registration, or when a user is queried from the Admin Console. When you create an LDAP Federation provider, Red Hat Single Sign-On will automatically provide set of built-in mappers for this provider. You are free to change this set and create a new mapper or update/delete existing ones.

Most of LDAP servers (Microsoft Active Directory, RHDS, FreeIPA) provide this by default. Some others (OpenLDAP, ApacheDS) may store the passwords in plain-text by default and you may need to explicitly enable password hashing for them. See the documentation of your LDAP server more details. 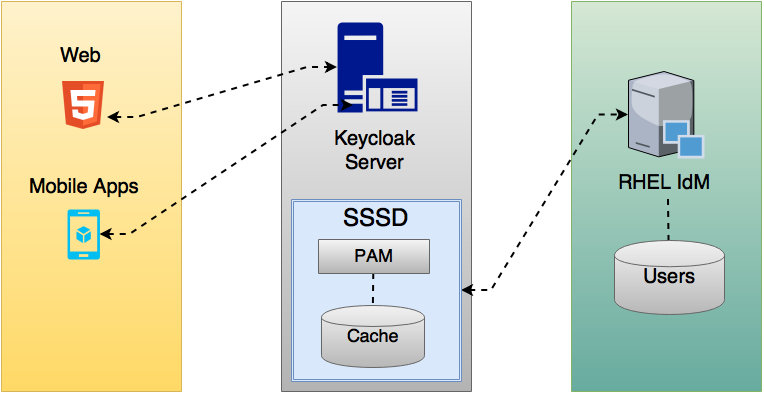