Maintaining system security and integrity within a network is critical, and it encompasses every user, application, service, and server within the network infrastructure. It requires an understanding of everything that is running on the network and the manner in which these services are used. At the core of maintaining this security is maintaining access to these applications and services and enforcing that access.
Kerberos is an authentication protocol significantly safer than normal password-based authentication. With Kerberos, passwords are never sent over the network, even when services are accessed on other machines.
Kerberos provides a mechanism that allows both users and machines to identify themselves to network and receive defined, limited access to the areas and services that the administrator configured. Kerberos authenticates entities by verifying their identity, and Kerberos also secures this authenticating data so that it cannot be accessed and used or tampered with by an outsider.

Most conventional network services use password-based authentication schemes, where a user supplies a password to access a given network server. However, the transmission of authentication information for many services is unencrypted. For such a scheme to be secure, the network has to be inaccessible to outsiders, and all computers and users on the network must be trusted and trustworthy.
With simple, password-based authentication, a network that is connected to the Internet cannot be assumed to be secure. Any attacker who gains access to the network can use a simple packet analyzer, or packet sniffer, to intercept user names and passwords, compromising user accounts and, therefore, the integrity of the entire security infrastructure.
Kerberos eliminates the transmission of unencrypted passwords across the network and removes the potential threat of an attacker sniffing the network.
Rather than authenticating each user to each network service separately as with simple password authentication, Kerberos uses symmetric encryption and a trusted third party (a key distribution center or KDC) to authenticate users to a suite of network services. The computers managed by that KDC and any secondary KDCs constitute a realm.
When a user authenticates to the KDC, the KDC sends a set of credentials (a ticket) specific to that session back to the user's machine, and any Kerberos-aware services look for the ticket on the user's machine rather than requiring the user to authenticate using a password.
As shown in Figure 11.1, “Kerberos Authentication”, each user is identified to the KDC with a unique identity, called a principal. When a user on a Kerberos-aware network logs into his workstation, his principal is sent to the KDC as part of a request for a ticket-granting ticket (or TGT) from the authentication server. This request can be sent by the login program so that it is transparent to the user or can be sent manually by a user through the kinit program after the user logs in.
The KDC then checks for the principal in its database. If the principal is found, the KDC creates a TGT, encrypts it using the user's key, and sends the TGT to that user. 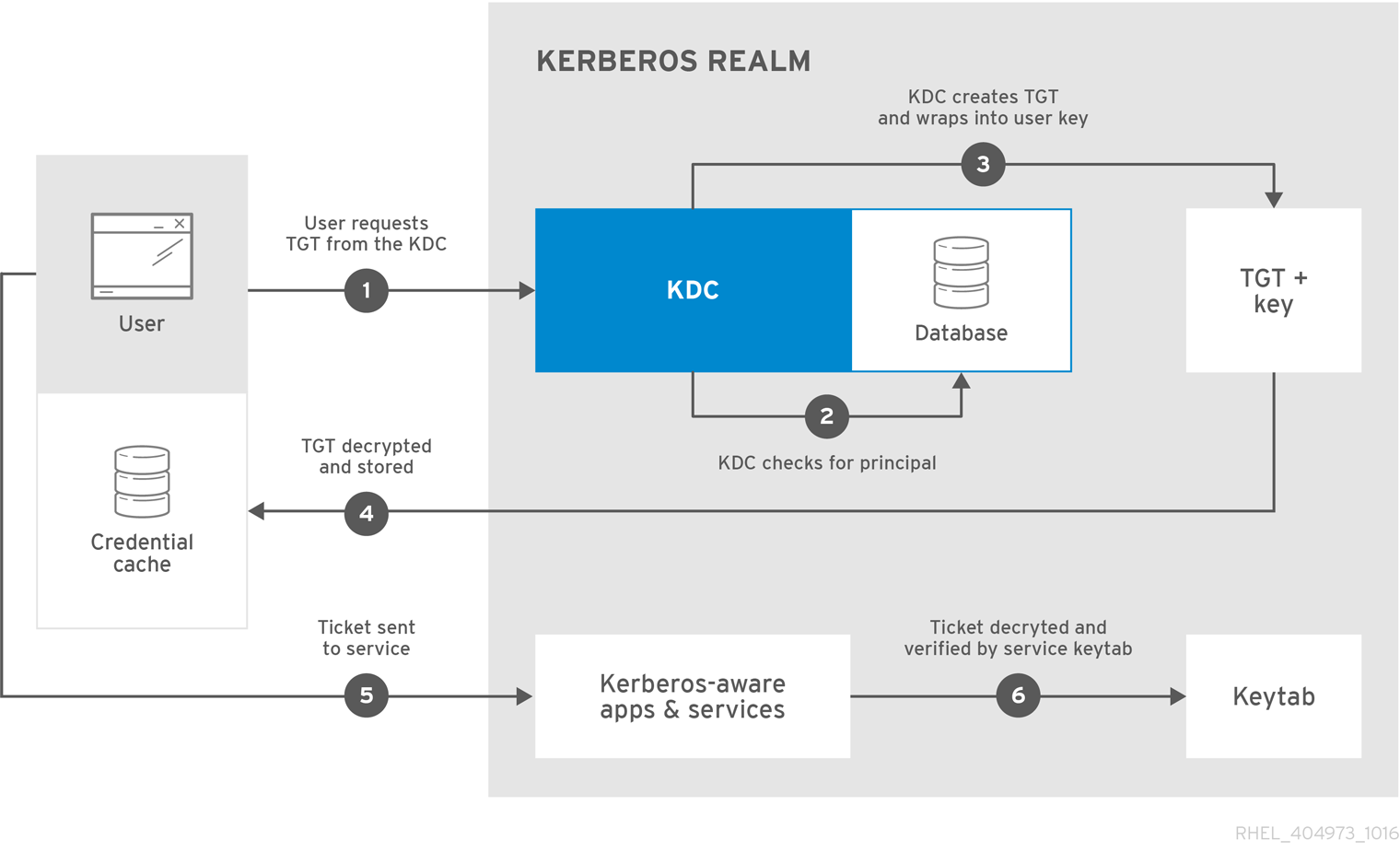 The login or kinit program on the client then decrypts the TGT using the user's key, which it computes from the user's password. The user's key is used only on the client machine and is not transmitted over the network. The ticket (or credentials) sent by the KDC are stored in a local store, the credential cache (ccache), which can be checked by Kerberos-aware services. Red Hat Enterprise Linux 7 supports the following types of credential caches:
With SSSD KCM, the Kerberos caches are not stored in a passive store, but managed by a daemon. In this setup, the Kerberos library, which is typically used by applications such as kinit, is a KCM client and the daemon is referred to as a KCM server.
Having the Kerberos credential caches managed by the SSSD KCM daemon has several advantages:
After authentication, servers can check an unencrypted list of recognized principals and their keys rather than checking kinit; this is kept in a keytab.
The TGT is set to expire after a certain period of time (usually 10 to 24 hours) and is stored in the client machine's credential cache. An expiration time is set so that a compromised TGT is of use to an attacker for only a short period of time. After the TGT has been issued, the user does not have to enter their password again until the TGT expires or until they log out and log in again.
Whenever the user needs access to a network service, the client software uses the TGT to request a new ticket for that specific service from the ticket-granting server (TGS). The service ticket is then used to authenticate the user to that service transparently.

The principal identifies not only the user or service, but also the realm that the entity belongs to. A principal name has two parts, the identifier and the realm:
For a user, the identifier is only the Kerberos user name. For a service, the identifier is a combination of the service name and the host name of the machine it runs on:
The service name is a case-sensitive string that is specific to the service type, like host, ldap, http, and DNS. Not all services have obvious principal identifiers; the sshd daemon, for example, uses the host service principal.
The host principal is usually stored in /etc/krb5.keytab.
When Kerberos requests a ticket, it always resolves the domain name aliases (DNS CNAME records) to the corresponding DNS address (A or AAAA records). The host name from the address record is then used when service or host principals are created.
For example:
A service attempts to connect to the host using its CNAME alias:
The Kerberos server requests a ticket for the resolved host name, web-01.example.com@EXAMPLE.COM, so the host principal must be host/web-01.example.com@EXAMPLE.COM.

When a client attempts to access a service running on a particular server, it knows the name of the service (host) and the name of the server (foo.example.com), but because more than one realm can be deployed on the network, it must guess at the name of the Kerberos realm in which the service resides.
By default, the name of the realm is taken to be the DNS domain name of the server in all capital letters.
In some configurations, this will be sufficient, but in others, the realm name which is derived will be the name of a non-existent realm. In these cases, the mapping from the server's DNS domain name to the name of its realm must be specified in the domain_realm section of the client system's /etc/krb5.conf file. For example:
The configuration specifies two mappings. The first mapping specifies that any system in the example.com DNS domain belongs to the EXAMPLE.COM realm. The second specifies that a system with the exact name example.com is also in the realm. The distinction between a domain and a specific host is marked by the presence or lack of an initial period character. The mapping can also be stored directly in DNS using the "_kerberos TXT" records, for example:

Kerberos relies on being able to resolve machine names. Thus, it requires a working domain name service (DNS). Both DNS entries and hosts on the network must be properly configured, which is covered in the Kerberos documentation in /usr/share/doc/krb5-server-version-number.
Applications that accept Kerberos authentication require time synchronization. You can set up approximate clock synchronization between the machines on the network using a service such as ntpd. For information on the ntpd service, see the documentation in /usr/share/doc/ntp-version-number/html/index.html or the ntpd(8) man page.

Although Kerberos removes a common and severe security threat, it is difficult to implement for a variety of reasons:

The Kerberos system can be compromised if a user on the network authenticates against a non-Kerberos aware service by transmitting a password in plain text. The use of non-Kerberos aware services (including telnet and FTP) is highly discouraged. Other encrypted protocols, such as SSH or SSL-secured services, are preferred to unencrypted services, but this is still not ideal.

Kerberos can be a complex service to implement, with a lot of flexibility in how it is deployed. Table 11.1, “External Kerberos Documentation” and Table 11.2, “Important Kerberos Man Pages” list of a few of the most important or most useful sources for more information on using Kerberos.

Any of the manpage files can be opened by running man command_name.

[3] A system where both the client and the server share a common key that is used to encrypt and decrypt network communication.