This chapter describes how to configure an active/passive Apache HTTP server in a two-node Red Hat Enterprise Linux High Availability Add-On cluster using pcs to configure cluster resources. In this use case, clients access the Apache HTTP server through a floating IP address. The web server runs on one of two nodes in the cluster. If the node on which the web server is running becomes inoperative, the web server starts up again on the second node of the cluster with minimal service interruption.
Figure 2.1, “Apache in a Red Hat High Availability Two-Node Cluster” shows a high-level overview of the cluster. The cluster is a two-node Red Hat High Availability cluster which is configured with a network power switch and with shared storage. The cluster nodes are connected to a public network, for client access to the Apache HTTP server through a virtual IP. The Apache server runs on either Node 1 or Node 2, each of which has access to the storage on which the Apache data is kept. 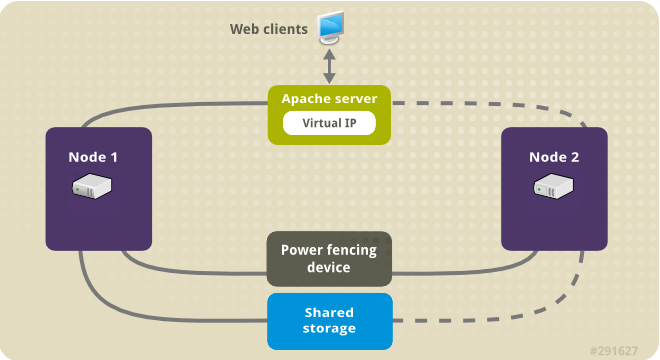 2.1. Configuring an LVM Volume with an ext4 File System

LVM volumes and the corresponding partitions and devices used by cluster nodes must be connected to the cluster nodes only.
Since the /dev/sdb1 partition is storage that is shared, you perform this procedure on one node only,