sVirt is a technology included in Red Hat Enterprise Linux 6 that integrates SELinux and virtualization. sVirt applies Mandatory Access Control (MAC) to improve security when using virtual machines. The main reasons for integrating these technologies are to improve security and harden the system against bugs in the hypervisor that might be used as an attack vector aimed toward the host or to another virtual machine.
This chapter describes how sVirt integrates with virtualization technologies in Red Hat Enterprise Linux 6. 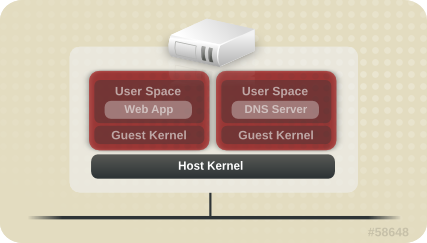 When services are not virtualized, machines are physically separated. Any exploit is usually contained to the affected machine, with the obvious exception of network attacks. When services are grouped together in a virtualized environment, extra vulnerabilities emerge in the system. If there is a security flaw in the hypervisor that can be exploited by a guest instance, this guest may be able to not only attack the host, but also other guests running on that host. This is not theoretical; attacks already exist on hypervisors. These attacks can extend beyond the guest instance and could expose other guests to attack.
sVirt is an effort to isolate guests and limit their ability to launch further attacks if exploited. This is demonstrated in the following image, where an attack cannot break out of the virtual machine and extend to another host instance: 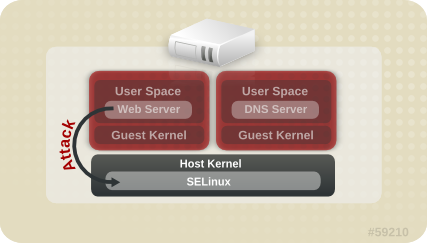 SELinux introduces a pluggable security framework for virtualized instances in its implementation of Mandatory Access Control (MAC). The sVirt framework allows guests and their resources to be uniquely labeled. Once labeled, rules can be applied which can reject access between different guests.