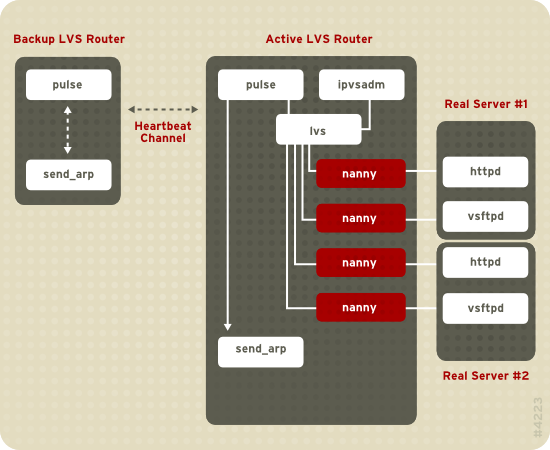 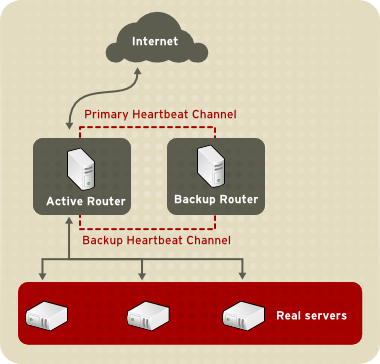 Service requests arriving at an LVS router are addressed to a virtual IP address or VIP. This is a publicly-routable address that the administrator of the site associates with a fully-qualified domain name, such as www.example.com, and which is assigned to one or more virtual servers[1]. Note that a VIP address migrates from one LVS router to the other during a failover, thus maintaining a presence at that IP address, also known as floating IP addresses.
VIP addresses may be aliased to the same device that connects the LVS router to the public network. For instance, if eth0 is connected to the Internet, then multiple virtual servers can be aliased to eth0:1. Alternatively, each virtual server can be associated with a separate device per service. For example, HTTP traffic can be handled on eth0:1, and FTP traffic can be handled on eth0:2.
Only one LVS router is active at a time. The role of the active LVS router is to redirect service requests from virtual IP addresses to the real servers. The redirection is based on one of eight load-balancing algorithms:
Also, the active LVS router dynamically monitors the overall health of the specific services on the real servers through simple send/expect scripts. To aid in detecting the health of services that require dynamic data, such as HTTPS or SSL, you can also call external executables. If a service on a real server malfunctions, the active LVS router stops sending jobs to that server until it returns to normal operation.
The backup LVS router performs the role of a standby system. Periodically, the LVS routers exchange heartbeat messages through the primary external public interface and, in a failover situation, the private interface. Should the backup LVS router fail to receive a heartbeat message within an expected interval, it initiates a failover and assumes the role of the active LVS router. During failover, the backup LVS router takes over the VIP addresses serviced by the failed router using a technique known as ARP spoofing — where the backup LVS router announces itself as the destination for IP packets addressed to the failed node. When the failed node returns to active service, the backup LVS router assumes its backup role again.
The simple, two-tier configuration in Figure 1.17, “Two-Tier LVS Topology” is suited best for clusters serving data that does not change very frequently — such as static web pages — because the individual real servers do not automatically synchronize data among themselves.

Figure 1.18, “Three-Tier LVS Topology” shows a typical three-tier LVS configuration. In the example, the active LVS router routes the requests from the public network (Internet) to the second tier — real servers. Each real server then accesses a shared data source of a Red Hat cluster in the third tier over the private network. 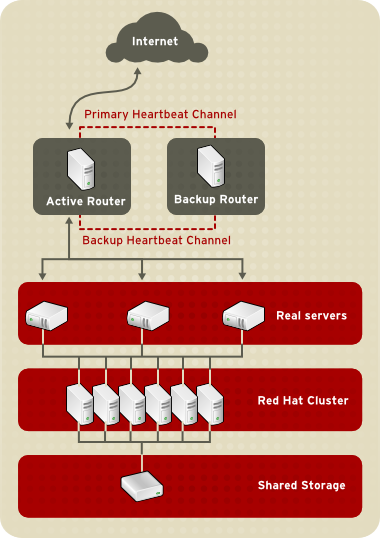 This topology is suited well for busy FTP servers, where accessible data is stored on a central, highly available server and accessed by each real server via an exported NFS directory or Samba share. This topology is also recommended for websites that access a central, high-availability database for transactions. Additionally, using an active-active configuration with a Red Hat cluster, you can configure one high-availability cluster to serve both of these roles simultaneously. 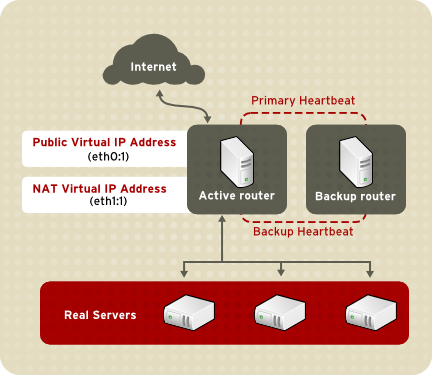 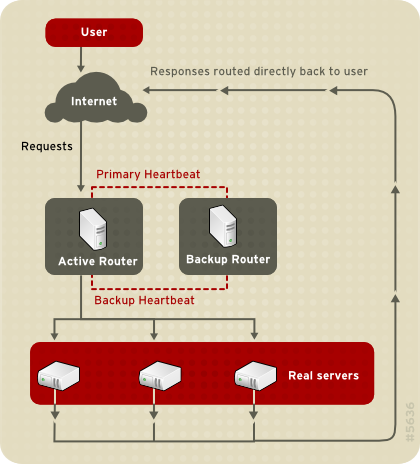 In a typical direct-routing LVS configuration, an LVS router receives incoming server requests through a virtual IP (VIP) and uses a scheduling algorithm to route the request to real servers. Each real server processes requests and sends responses directly to clients, bypassing the LVS routers. Direct routing allows for scalability in that real servers can be added without the added burden on the LVS router to route outgoing packets from the real server to the client, which can become a bottleneck under heavy network load.
While there are many advantages to using direct routing in LVS, there are limitations. The most common issue with direct routing and LVS is with Address Resolution Protocol (ARP).
In typical situations, a client on the Internet sends a request to an IP address. Network routers typically send requests to their destination by relating IP addresses to a machine's MAC address with ARP. ARP requests are broadcast to all connected machines on a network, and the machine with the correct IP/MAC address combination receives the packet. The IP/MAC associations are stored in an ARP cache, which is cleared periodically (usually every 15 minutes) and refilled with IP/MAC associations.
The issue with ARP requests in a direct-routing LVS configuration is that because a client request to an IP address must be associated with a MAC address for the request to be handled, the virtual IP address of the LVS router must also be associated to a MAC. However, because both the LVS router and the real servers have the same VIP, the ARP request is broadcast to all the nodes associated with the VIP. This can cause several problems, such as the VIP being associated directly to one of the real servers and processing requests directly, bypassing the LVS router completely and defeating the purpose of the LVS configuration. Using an LVS router with a powerful CPU that can respond quickly to client requests does not necessarily remedy this issue. If the LVS router is under heavy load, it may respond to the ARP request more slowly than an underutilized real server, which responds more quickly and is assigned the VIP in the ARP cache of the requesting client.
To solve this issue, the incoming requests should only associate the VIP to the LVS router, which will properly process the requests and send them to the real server pool. This can be done by using the arptables packet-filtering tool.

In certain situations, it may be desirable for a client to reconnect repeatedly to the same real server, rather than have an LVS load-balancing algorithm send that request to the best available server. Examples of such situations include multi-screen web forms, cookies, SSL, and FTP connections. In those cases, a client may not work properly unless the transactions are being handled by the same server to retain context. LVS provides two different features to handle this: persistence and firewall marks.

When enabled, persistence acts like a timer. When a client connects to a service, LVS remembers the last connection for a specified period of time. If that same client IP address connects again within that period, it is sent to the same server it connected to previously — bypassing the load-balancing mechanisms. When a connection occurs outside the time window, it is handled according to the scheduling rules in place.
Persistence also allows you to specify a subnet mask to apply to the client IP address test as a tool for controlling what addresses have a higher level of persistence, thereby grouping connections to that subnet.
Grouping connections destined for different ports can be important for protocols that use more than one port to communicate, such as FTP. However, persistence is not the most efficient way to deal with the problem of grouping together connections destined for different ports. For these situations, it is best to use firewall marks.

Firewall marks are an easy and efficient way to a group ports used for a protocol or group of related protocols. For example, if LVS is deployed to run an e-commerce site, firewall marks can be used to bundle HTTP connections on port 80 and secure, HTTPS connections on port 443. By assigning the same firewall mark to the virtual server for each protocol, state information for the transaction can be preserved because the LVS router forwards all requests to the same real server after a connection is opened.
Because of its efficiency and ease-of-use, administrators of LVS should use firewall marks instead of persistence whenever possible for grouping connections. However, you should still add persistence to the virtual servers in conjunction with firewall marks to ensure the clients are reconnected to the same server for an adequate period of time.
[1] A virtual server is a service configured to listen on a specific virtual IP.