Let's begin by reviewing the Java deserialization process. Java Serialization Framework is JDK's built-in utility that allows Java objects to be converted into byte representation of the object and vice versa. The process of converting Java objects into their binary form is called serialization and the process of reading binary data to construct a Java object is called deserialization. In any enterprise environment the ability to save or retrieve the state of the object is a critical factor in building reliable distributed systems. For instance, a JMS message may be serialized to a stream of bytes and sent over the wire to a JMS destination. A RESTful client application may serialize an OAuth token to disk for future verification. Java's Remote Method Invocation (RMI) uses serialization under the hood to pass objects between JVMs. These are just some of the use cases where Java serialization is used. 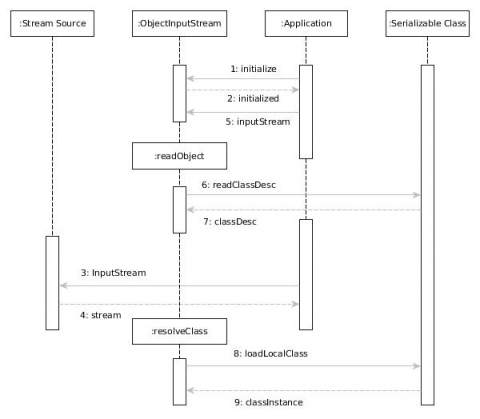 So, what is the problem?

During deserialization process, when readObject() takes the byte stream to reconstruct the object, it looks for the magic bytes relevant to the object type that has been written to the serialization stream, to determine what object type (e.g. enum, array, String, etc.) it needs to resolve the byte stream to. If the byte stream can not be resolved to one of these types, then it will be resolved to an ordinary object (TC_OBJECT), and finally the local class for that ObjectStreamClass will be retrieved from the JVM's classpath. If the class is not found then an InvalidClassException will be thrown.

The problem arises when readObject() is presented with a byte stream that has been manipulated to leverage classes that have a high chance of being available in the JVM's classpath, also known as gadget classes, and are vulnerable to Remote Code Execution (RCE). So far a number of classes have been identified to be vulnerable to RCE, however research is still ongoing to discover more of such classes. Now you might ask, how these classes can be used for RCE? Well, depending on the nature of the class, the attack can be materialized by constructing the state of that particular class with a malicious payload, which is serialized and is fed at the point in which serialized data is exchanged (i.e. Stream Source) in the above work flow. This tricks JDK to believe this is the trusted byte stream, and it will be deserialized by initializing the class with the payload. Depending on the payload this can have disastrous consequences.

Of course the challenge for the adversary is to be able to access the stream source for this purpose, of which the details are outside the scope of this article. A good tool to review for further information on the subject is ysoserial, which is arguably the best tool for generating payloads.

How to mitigate against deserialization?

Loosely speaking, mitigation against a deserialization vulnerability is accomplished by implementing a LookAheadObjectInputStream strategy. The implementation needs to subclass the existing ObjectInputStream to override the resolveClass() method to verify if the class is allowed to be loaded. This approach appears to be an effective way of hardening against deserialization and usually consists of two implementation flavors: whitelist or blacklist. In whitelist approach, implementation only includes the acceptable business classes that are allowed to be deserialized and blocks other classes. Blacklist implementation on the other hand holds a set of well-known classes that are vulnerable and blocks them from being serialized.

Both whitelist and blacklist have their own pros and cons, however, whitelist-based implementation proves to be a better way to mitigate against a deserialization flaw. It effectively follows the principle of checking the input against the good values which have always been a part of security practices. On the other hand, blacklist-based implementation heavily relies on the intelligence gathered around what classes have been vulnerable and gradually include them in the list which is easy enough to be missed or bypassed.

The core mechanism of deserialization filtering is based on an ObjectInputFilter interface which provides a configuration capability so that incoming data streams can be validated during the deserialization process. The status check on the incoming stream is determined by Status.ALLOWED, Status.REJECTED, or Status.UNDECIDED arguments of an enum type within ObjectInputFilter interface. These arguments can be configured depending on the deserialization scenarios, for instance if the intention is to blacklist a class then the argument will return Status.REJECTED for that specific class and allows the rest to be deserialized by returning the Status.UNDECIDED. On the other hand if the intention of the scenario is to whitelist then Status.ALLOWED argument can be returned for classes that match the expected business classes. In addition to that, the filter also allows access to some other information for the incoming deserializing stream, such as the number of array elements when deserializing an array of class (arrayLength), the depth of each nested objects (depth), the current number of object references (references), and the current number of bytes consumed (streamBytes). This information provides more fine-grained assertion points on the incoming stream and return the relevant status that reflects each specific use cases.

Ways to configure the Filter

Contrary to JDK 9, latest JDK 8 (1.8.0_144) seems to only allow filter to be set on ObjectInputFilter.Config.setObjectInputFilter(ois, new VehicleFilter()); at the moment.

The value of jdk.serialFilter is configured as a sequence of patterns either by checking against the class name or the limits for incoming byte stream properties. Patterns are separated by semicolon and whitespace is also considered to be part of a pattern. Limits are checked before classes regardless of the order in which the pattern sequence is configured. Below are the limit properties which can be used during the configuration:

Other patterns match the class or package name as returned by Class.getName(). Class/Package patterns accept asterisk (*), double asterisk (**), period (.), and forward slash (/) symbols as well. Below are a couple pattern scenarios that could possibly happens:

JDK 9 has also introduced additional built-in, configurable filters mainly for RMI Registry and Distributed Garbage Collection (DGC) . Built-in filters for RMI Registry and DGC white-list classes that are expected to be used in either of these services. Below are classes for both RMIRegistryImpl and DGCImp:

In addition to these classes, users can also add their own customized filters using sun.rmi.registry.registryFilter and sun.rmi.transport.dgcFilter system or security properties with the property pattern syntax as described in previous section.