This chapter of the document describes the deployed reference architecture. It includes architectural details for:

The reference architecture does not include step by step instructions for deploying OpenShift or OpenStack, you will need to refer to the official product documentation.

Figure 7 depicts the OpenShift components of the deployed reference architecture for OpenShift on OpenStack. Refer to this diagram to visualize the relationships between OpenShift roles and services, including the underlying OpenStack networks described in the later sections. 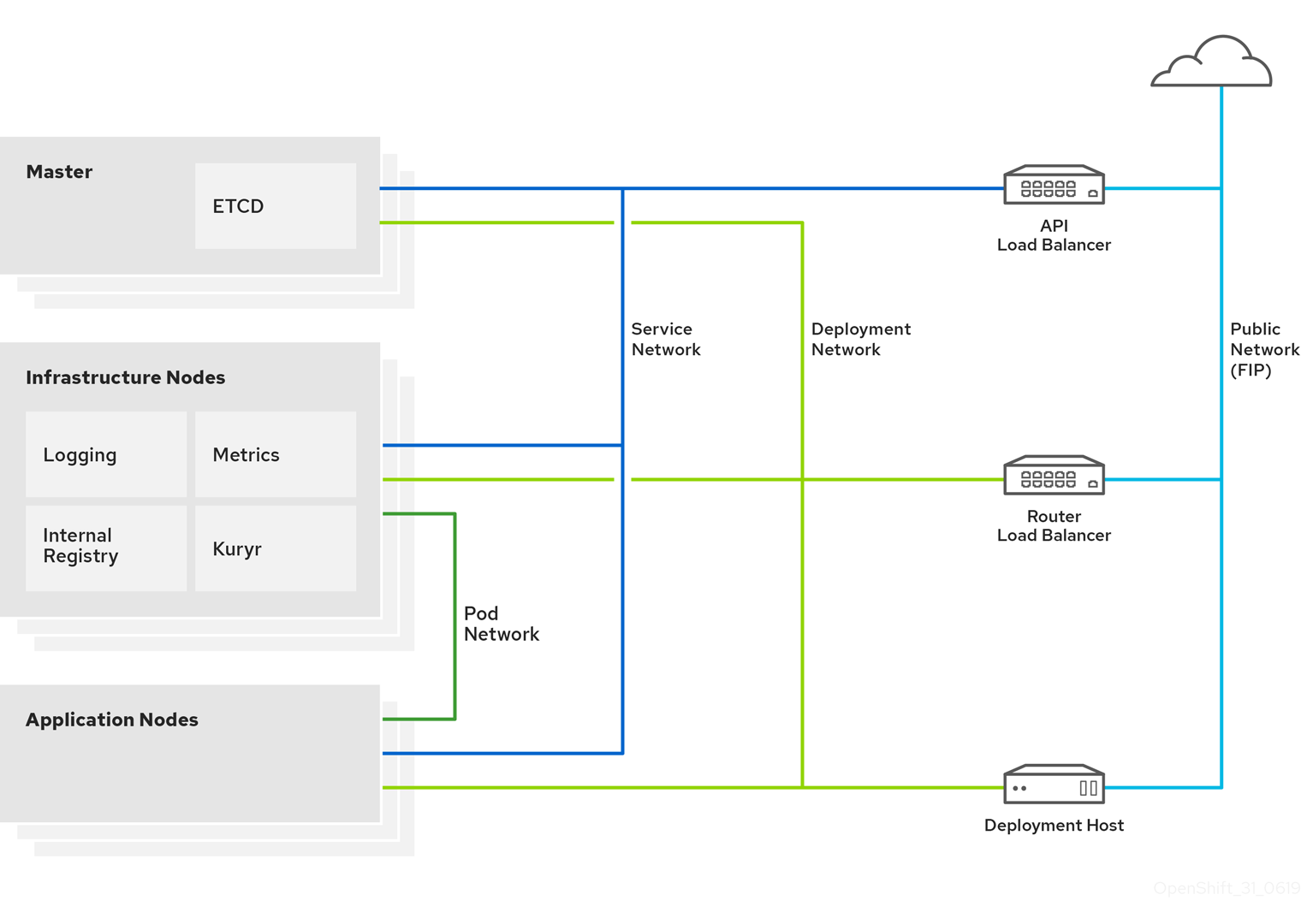 Listed below are the types of tenant networks used in this reference architecture:

A neutron router running in OpenStack routes L3 traffic between the deployment (bastion), pod, and service networks. It also acts as a gateway for instances on internal networks that need to access the outside world.

By default, openshift-ansible assigns floating IP addresses to all OpenStack instances during installation. As a result, all instances are accessible from the outside world. You will need to consider whether this approach is acceptable in your deployment.

A deployment host is recommended for production deployments for the following reasons:

DNS is provided by a Bind 9 server accessible using the external (public) network. The DNS server is authoritative for the openshift.example.io domain. This domain resolves the public address records specified in openshift-ansible and updated using nsupdate. An example public nsupdate key is shown in the following example:

The DNS server is named ns1.example.io. It is configured to forward addresses it cannot resolve to an external DNS server.

The openshift instance hostnames resolve to addresses on the bastion_net network. A record for the deployment server must be added manually, as openshift-ansible does not add it automatically. The following example shows a zone file populated by openshift-ansible:

After running install.yml, an address record is added for console.openshift.example.com that resolves to an externally accessible address on the public network. This address is from the OpenStack floating IP pool.

The install.yml playbook also creates a wildcard record named apps.openshift.example.io. This address is used to access exposed OpenShift applications from clients outside the internal OpenShift cluster network. The address resolves to a floating IP assigned to the OpenShift router pod.

OpenShift hosts are either masters or nodes. The masters run the control plane components including the API server, controller manager server, and the etcd state database. Nodes provide the runtime environment for containers. They run the services required to be managed by the master and to run pods. The master schedules pods to be run on the nodes.

The RAM, CPU, and disk recommendations in this reference architecture should be considered minimums, so adjust them as needed. Hawkular metrics, the Prometheus cluster monitoring service, and the EFK stack for log aggregation in particular require additional disk and memory based on polling intervals and storage retention length. Specific guidelines for configuring these services and environment specific and beyond the scope of this document.

In this reference architecture, three master nodes are deployed for high availability to help ensure the cluster has no single point of failure. An Octavia load balancer balances the loads between API master endpoints. The controller manager server runs in an active-passive configuration with one instance elected as a cluster leader at one time.

This reference architecture also uses infrastructure nodes. These are OpenShift nodes that run the OpenShift Container Platform infrastructure components including routers, the cluster monitoring operator, the registry endpoint, and the kuryr controller. Two infrastructure nodes are required for high availability. However, three nodes are deployed in this reference architecture to support the logging and metrics services. The sharded ElasticSearch database that backs the container log aggregation pods in particular requires three nodes for high availability.

Chapter 9, Appendix A: Pod placement by role describes where the pods are scheduled to roles in this reference architecture. In some cases, multiple replicas of each pod are scheduled across all nodes of that role. In other cases there are single pods.

For example, the kuryr-controller pod runs on a single infrastructure node. Kuryr-cni (listener) pods run on all nodes regardless of role. They run as a daemonset that links the containers running on a node to the neutron network.

A Cinder persistent volume is provisioned for each master and node by the openshift-ansible installer. The volume is mounted to /var/lib/docker, as the following example demonstrates.

The container storage volume in this reference architecture is 15 GB and mounted to /dev/vdb on all instances. This is handled automatically by openshift-ansible during instance provisioning. The following example shows the list of Cinder volumes attached to each OpenShift instance.

Adjust the size based on the number of size of containers each node will run. You can change the container volume size with the _`openshift_openstack_docker_volume_size Ansible variable in provision.yml.

The openshift-ansible installer automates the creation of a Cinder storage class for dynamic persistent volume creation. The following example shows the storage class:

The Cinder storage class access mode is RWO only; this is sufficient for most use cases. RWX (shared) access mode will be addressed in a future reference architecture. There are multiple ways to address the shared use case with OpenShift Container Platform 3.11 and Red Hat OpenStack Platform 13 but they are beyond the scope of this document.

This reference architecture uses Ceph Rados Gateway. When a Cinder persistent volume is used it is attached to a single infrastructure node which can become a single point of failure.

Note that by default the OpenStack user specified to configure Ceph Rados Gateway in install.yml must have the admin or Member Keystone role.