This procedure depends on a number of services and settings that must be in place before proceeding.

This procedure was developed and tested on Red Hat OpenStack Platform 10. While it may apply to other releases, no claims are made for installations on versions other than RHOSP 10.

This procedure makes use of the following RHOSP service components:

All of the RHOSP commands in this reference environment are executed using the CLI tools. The user needs a RHOSP account, and a project to contain the service.

For the manual procedure the user needs only the member role on the project. Running the installation using Heat requires the heat_stack_owner role.

The RHOSP credentials are commonly stored in a source file that sets the values of their shell environment.

A script fragement from the RHOSP keystone web console is available as shown below. 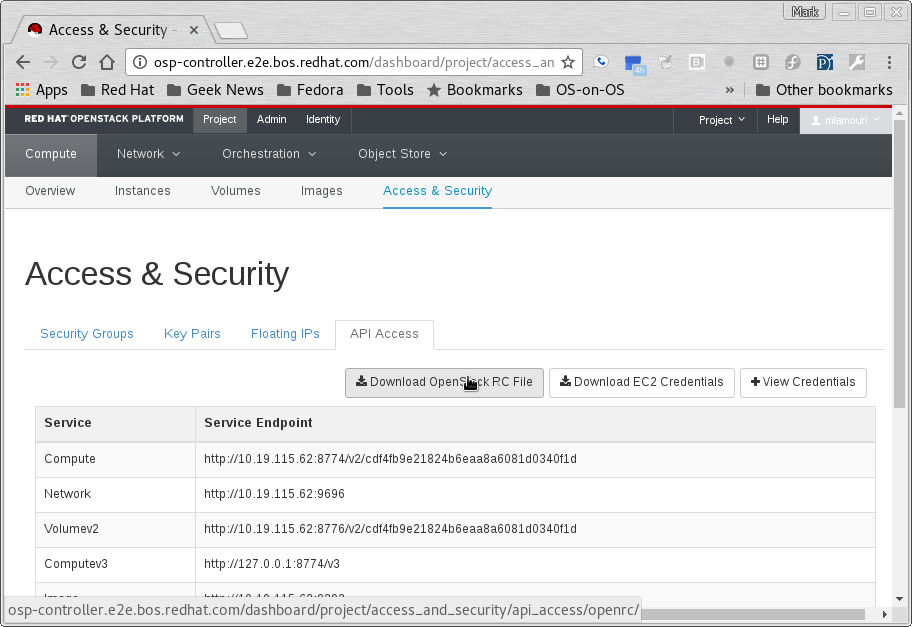 A simpler format can be used and is provided in the following code snippet:

To use these values for RHOSP CLI commands, source the file into the environment.

Replace the values here with those for the Red Hat OpenStack Platform account.

This procedure expects the instances to be created from the stock Red Hat Enterprise Linux 7.3 cloud image.

Load the RHEL7 image into Glance

Confirm the image has been created as follows:

RHOSP uses cloud-init to place an ssh public key on each instance as it is created to allow ssh access to the instance. RHOSP expects the user to hold the private key.

ssh refuses to use private keys if the file permissions are too open. Be sure to set the permissions on ocp3.pem to 600 (user read/write).

This step changes the global configuration of the RHOSP service. It must be done by an RHOSP service administrator.

When creating a heat stack, the heat engine gets a keystone token to continue taking actions on behalf of the user. By default the token is only good for 1 hour (3600 seconds). The token expires after 1 hour, and the heat engine can no longer continue.

The RHOCP 3 heat stack deployment may take more than one hour. To ensure deployment completion, increase the expiration time on the RHOSP controllers and restart the httpd service.

The RHOCP service must be connected to an external public network so that users can reach it. In general, this requires a physical network or at least a network that is otherwise out of the control of the RHOSP service.

The control network is connected to the public network via a router during the network setup.

Each instance is attached to the control network when it is created. Instances that accept direct inbound connections (the bastion, masters and infrastructure nodes) are given floating IP addresses from a pool on the public network.

The provisioner must have permission necessary to create and attach the router to the public network and to create floating IPs from the pool on that network.

The floating IP pool must be large enough to accomodate all of the accessable hosts.

Before beginning the provisioning process, the hostname for developer access and the wild card DNS entry for applications must be in place. Both of these should point to the IP address of the load balancer.

Both the IP address and the FQDN for the OpenShift master name and the application wild card entry are known before the provisioning process begins.

A wildcard DNS entry is a record where, instead of a leading hostname, the record has an asterisk (*), ie. *.wildcard.example.com. The IP address associated with a wildcard DNS record returned for any query that matches the suffix. All of the following examples return the same IP address:

Since the instances are created and addressed dynamically, the name/IP pairs cannot be known before the provisioning process begins. The entries are added using dynamic DNS after each instance is created.

Dynamic DNS updates use a tool called nsupdate found in the bind-utils RPM. The update requests are authorized using a symmetric key found on the DNS host in /etc/rndc.key.

Appendix B contains a procedure to create a heat stack running a compliant DNS service.

The load-balanced DNS name that developers use must be in a DNS A record pointing to the haproxy server before installation. For applications, a wildcard DNS entry must point to the haproxy host.

The configuration of the load-balancer is created after all of the RHOCP instances have been created and floating IP addresses assigned.

When installing RHOCP using Heat, the load-balancer can be created and configured as part of the heat stack.

RHOCP can use an external LDAP or Active Directory service to manage developers from a single user base.

The hostname or IP address of the LDAP service must be known before commencing. This procees requires the base_dn and a small set of parameters to allow LDAP authentication by the RHOCP service.

In summary, this table lists all of the information and settings that an operator requires to begin a RHOCP deployment on RHOSP.