When planning a large CloudForms implementation, consideration must be given to the number and size of regions required, and the layout of zones within those regions.[6]. Figure 3.1, “Regions and Zones” shows an example of multiple regions working together in a Red Hat CloudForms environment. 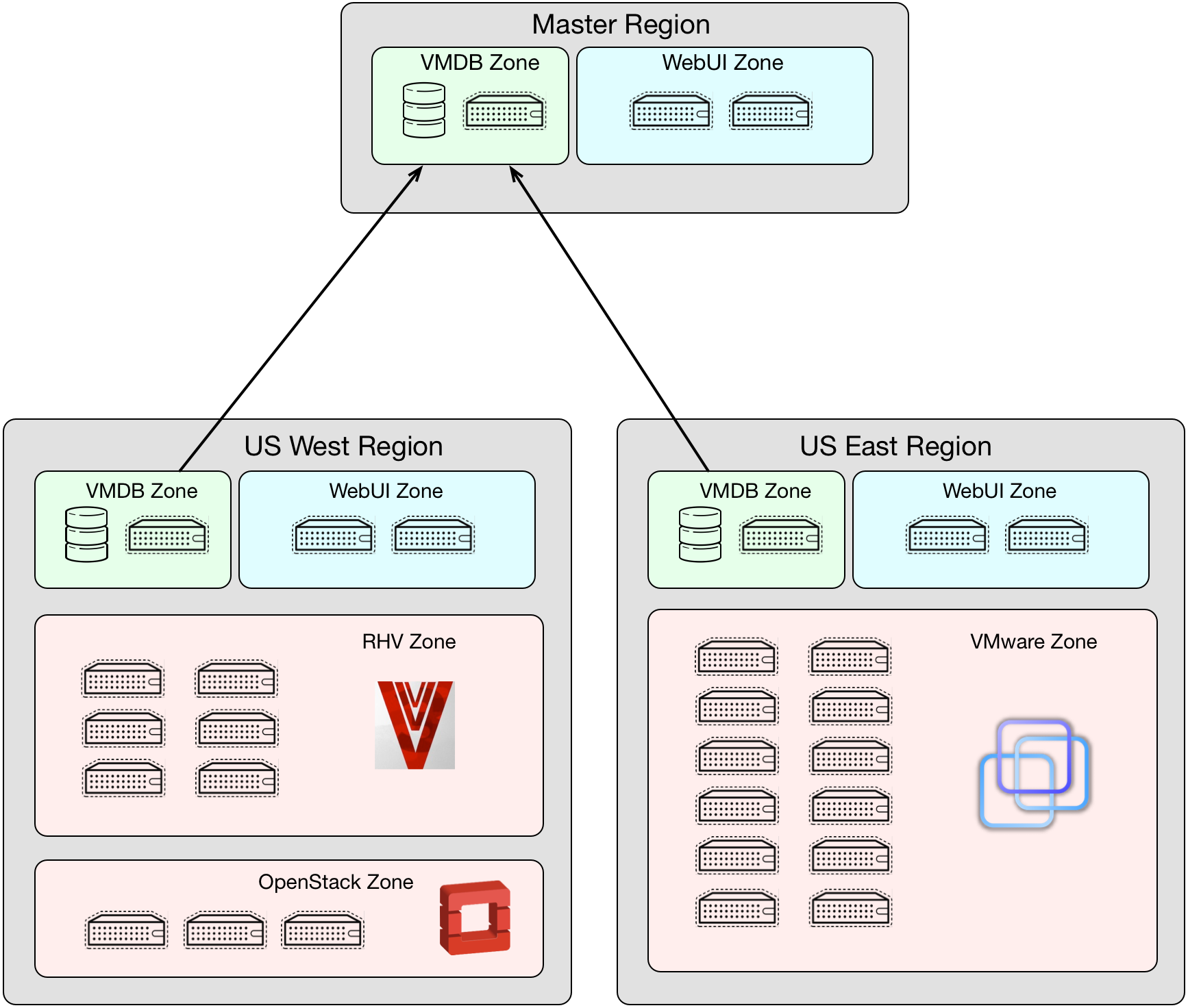 Each region has a dedicated WebUI zone containing two CFME appliances (load-balanced), that users local to the region connect to for interactive management. The two subordinate regions each have one or more provider-specific zones, containing the CFME appliances that manage the workload for their respective providers.

This section describes some of the considerations when designing regions and zones, and presents some guidelines and suggestions for implementation.

A region is a self-contained collection of CloudForms Management Engine (CFME) appliances. Each region has a database - the VMDB - and one or more appliances running the evmserverd service with an associated set of configured worker processes. Regions are often used for organisational or geographical separation of resources, and the choice of region count, location and size is often based on both operational and technical factors.

All CFME appliances in a region access the same PostgreSQL database, and so the I/O and CPU performance of the database server is a significant factor in determining the maximum size to which a region can grow (in terms of numbers of managed objects) whilst maintaining acceptable performance.

The VMDB database load is determined by many factors including:

It is very difficult to define a representative load for simulation purposes, due to the many permutations of workload factors. Some analysis has been made of existing large CloudForms installations however, and it has been observed that for an "average" mix of the workload factors listed above, an optimally tuned and maintained PostgreSQL server should be able to handle the load from managing up to 5000 VMware objects (VMs, hosts, clusters and datastores, for example). Larger regions than this are possible if the overall database workload is lighter - typically the case for the cloud and container providers - but as with any large database system, performance should be carefully monitored.

Table 3.1, “Guidelines for Maximum Region Size” provides suggested guidelines for the maximum number of active or "running" objects (for example VMs, instances, clusters, hosts, datastores, pods or containers) in a region containing one or more providers. Regions with several provider types (for example both VMware and Amazon EC2) will have a practical maximum somewhere between the limits suggested for each provider.

It should be noted that these numbers are approximate and are only suitable for planning and design purposes. The absolute practical maximum size for a region will depend on acceptable performance criteria, database server capability, and the factors listed in Section 3.1.1.1, “Database Load Factors”.

When planning regions it is often useful to under-size a region rather than over-size. It is usually easier to add capacity to a smaller region that is performing well, than it is to split an under-performing large single region into multiple regions.

A 'global' region is generally capable of handling considerably more objects as it has no active providers of its own, and has a lower database load. Many CloudForms installations have global regions that manage in excess of 50,000 objects.

3.1.2. Number of CFME Appliances in a Region

Two of the most resource-intensive tasks are those performed by the C&U Data collector and Data Processor workers, particularly where there is a limited time window for the collection of realtime data as there is with VMware or OpenStack providers (see Chapter 6, Capacity & Utilization). It has been established through testing that one C&U Data Collector worker can retrieve and store the metrics from approximately 150 VMware VMs or OpenStack instances in the rolling 60 minute time window that realtime metrics are retained for. As an out-of-the-box CFME appliance is configured with 2 C&U Data Collector workers, it should be able to handle the collection of realtime metrics for 300 VMs. If the number of workers is increased to 4, the appliance could handle the collection of realtime metrics for 600 VMs, although the increased CPU and memory load may adversely affect other processing taking place on the appliance.

Using the 1:300 ratio of CFME appliances to VMs is a convenient starting point for scaling the number of CFME appliances required for a region containing VMware, RHV or OpenStack providers. For other provider types this ratio is often increased to 1:400.

Table 3.2, “Objects per CFME Appliance Guidelines” provides suggested guideline ratios for each of the provider types. It should be noted that these numbers are approximate and are only suitable for planning and design purposes. The final numbers of CFME appliances required for a region or zone can only be determined from analysis of the specific region workload, and the performance of existing CFME appliances.

There are a number of considerations for region design and layout, but the most important are the anticipated number of managed objects (discussed above), and the location of the infrastructure components being managed, or the public cloud endpoints.

With a single, centrally located small or medium sized virtual infrastructure or cloud, the selection of region design is simpler. A single region is usually the most suitable option, with high availability and fault tolerance built into the design.

Large virtual infrastructures can often be split between several regions using multiple sets of provider credentials that have a restricted span-of-control within the entire enterprise.

With a distributed or large infrastructure the most obvious choice of region design might seem to be to allocate a region to each distributed location, however there are a number of advantages to both single and multi-region implementations for distributed infrastructures.

On CFME versions prior to 5.8, this tool should be prefixed by bin/rails runner, for example:

The architecture of CloudForms assumes LAN-speed latency (≈ 1 ms) between CFME appliances and their regional database for optimal performance. As latency increases, so overall system responsiveness decreases.

Typical symptoms of a high latency connection are as follows:

When considering deploying a CloudForms region spanning a WAN, it is important to establish acceptable performance criteria for the installation. Although in general a higher latency will result in slower but error-free performance, it has been observed that a latency of 5ms can cause the VMDB update transaction from an EMS refresh to timeout in very large regions. A latency as high as 42 ms can cause failures in database seeding operations.[10]

Network latency between subordinate and master regions is less critical as database replication occurs asynchronously. Latencies of 100 ms have been tested and shown to present no performance problems.

A second utility, db_ping_remote, is designed to check inter-region latency. It requires external PostgreSQL server details and credentials, and is run as follows:

Where WAN latency is deemed acceptable, the advantages of deploying a single region to manage all objects in a distributed infrastructure are as follows:

The advantages of deploying multiple regions to manage the objects in a distributed infrastructure are as follows:

As illustrated in Figure 3.1, “Regions and Zones” regions can be linked in such a way that several subordinate regions replicate their object data to a single global region. The global region has no providers of its own, and is typically used for enterprise-wide reporting as it has visibility of all objects. A new feature introduced with CloudForms 4.2 allows some management operations to be performed directly from the global region, utilising a RESTful API connection to the correct child region to perform the action. These operations include the following:

Regions have associated with them a region number that is allocated when the VMDB appliance is first initialised. When several regions are linked in a global/subregion hierarchy, all of the region numbers must be unique. Region numbers can be up to three digits long, and the region number is encoded into the leading digits of every object ID in the region. For example the following 3 message IDs are from different regions:

Global regions are often allocated a higher region number (99 is frequently used) to distinguish them from subordinate regions whose numbers often start with 0 and increase as regions are added. There is no technical restriction on region number allocation in a connected multi-region CloudForms deployment, other than uniqueness.

The following guidelines can be used when designing a region topology:

Zones are a way of logically subdividing the resources and worker processing within a region. They perform a number of useful functions, particularly for larger CloudForms installations.

The following sections describe some of the advantages of implementing zones within a CloudForms region.

Zones are a convenient way of isolating providers. Each provider has a number of workers associated with it that run on any appliance running the Provider Inventory and Event Monitor roles. These include:

Some types of cloud provider add several sub-provider types, each having their own Event Catchers and/or Refresh workers, and some also having Metrics Collector workers. For example adding a single OpenStack Cloud provider will add the following workers to each appliance with the Provider Inventory and Event Monitor roles:

In addition to these provider-specific workers, the two roles add a further two worker types that handle the events and process the metrics for all providers in the zone:

Each worker has a minimum startup cost of approximately 250-300MB, and the memory demands of each may vary depending on the number of managed objects for each provider. Having one provider per zone reduces the memory footprint of the workers running on the CFME appliances in the zone, and allows for dedicated per-provider Event Handler and Metrics Processor workers. The prevents an event surge from one provider from adversely affecting the handling of events from another provider, for example.

Shutting down or restarting a CFME appliance in a zone because of upgrade or update is less disruptive if only a single provider is affected.

Zones allow for more predictable and provider-instance-specific sizing of CFME appliances and appliance settings based on the requirement of individual providers. For example small VMware providers can have significantly different resourcing requirements to very large VMware providers, especially for C&U collection and processing.

If the VMDB is running on a CFME appliance (as opposed to a dedicated PostgreSQL appliance), putting the VMDB appliance in its own zone is a convenient way to isolate the appliance from non database-related activities.

A zone is a natural and intuitive way of associating a provider with a corresponding set of physical or logical resources, either in the same or remote location. For example there might be a requirement to open firewall ports to enable access to a particular provider’s EMS on a restricted or remote network. Isolating the specific CFME appliances to their own zone simplifies this task.

Not all worker processes are zone-aware. Some workers process messages originating from or relevant to the entire region

Specifying a log depot per zone in Configuration → Settings allows log collection to be initiated for all appliances in the zone, in a single action. When requested, each appliance in the zone is notified to generate and deposit the specified logs into the zone-specific depot.

The following guidelines can be used when designing a zone topology:

[6] Regions and zones are described in the CloudForms "Deployment Planning Guide" https://access.redhat.com/documentation/en-us/red_hat_cloudforms/4.2/html/deployment_planning_guide/
[7] With VMware providers relatively minor changes such as VM and Host property updates are detected by the Vim Broker and also cause EMS refreshes to be scheduled
[8] discussed in Chapter 8, VM and Instance Provisioning
[9] discussed in Chapter 6, Capacity & Utilization
[10] See https://bugzilla.redhat.com/show_bug.cgi?id=1422671