You can delete individual snapshots or a series of snapshots that are no longer required. Deleting a snapshot removes the ability to restore a virtual disk image to that particular restoration point. It does not necessarily reclaim the disk space consumed by the snapshot, nor does it delete the data. The disk space will only be reclaimed if a subsequent snapshot has overwritten the data of the deleted snapshot. For example, if the third snapshot out of five snapshots is deleted, the unchanged data in the third snapshot must be preserved on the disk for the fourth and fifth snapshots to be usable; however, if the fourth or fifth snapshot has overwritten the data of the third, then the third snapshot has been made redundant and the disk space can be reclaimed. Aside from potential disk space reclamation, deleting a snapshot may also improve the performance of the virtual machine.
When a snapshot is selected for deletion, QEMU creates a new logical volume of the same size to merge the snapshot being deleted with the subsequent snapshot. This new logical volume is resized to accommodate all differences between the two snapshots. The new logical volume can potentially be the total combined size of the two snapshots. Once the two snapshots are merged, the subsequent snapshot is renamed and flagged for deletion and is replaced by the new logical volume, which takes its name. Both the snapshot originally flagged for deletion and its subsequent snapshot are deleted, and in their place is the single merged snapshot.
For example, snapshot Delete_snapshot is 200 GB, and the subsequent snapshot, Next_snapshot, is 100 GB. Delete_snapshot is deleted and a new logical volume is created, temporarily named Snapshot_merge, with a size of 200 GB. Snapshot_merge ultimately resizes to 300 GB to accommodate the total merged contents of both Delete_snapshot and Next_snapshot. Next_snapshot is then renamed Delete_me_too_snapshot so that Snapshot_merge can be renamed Next_snapshot. Finally, Delete_snapshot and Delete_me_too_snapshot are deleted. 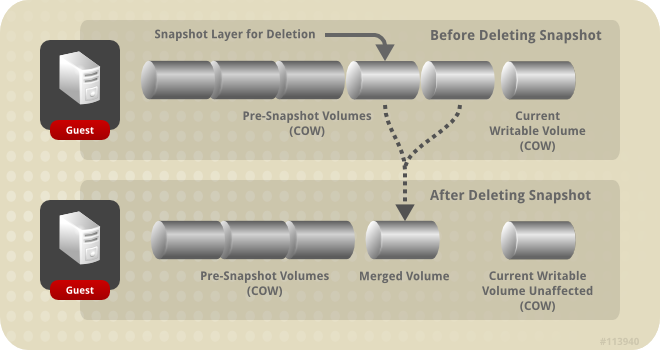