Red Hat Virtualization uses metadata to describe the internal structure of storage domains. Structural metadata is written to a segment of each storage domain. Hosts work with the storage domain metadata based on a single writer, and multiple readers configuration. Storage domain structural metadata tracks image and snapshot creation and deletion, and volume and domain extension.
The host that can make changes to the structure of the data domain is known as the Storage Pool Manager (SPM). The SPM coordinates all metadata changes in the data center, such as creating and deleting disk images, creating and merging snapshots, copying images between storage domains, creating templates and storage allocation for block devices. There is one SPM for every data center. All other hosts can only read storage domain structural metadata.
A host can be manually selected as the SPM, or it can be assigned by the Red Hat Virtualization Manager. The Manager assigns the SPM role by causing a potential SPM host to attempt to assume a storage-centric lease. The lease allows the SPM host to write storage metadata. It is storage-centric because it is written to the storage domain rather than being tracked by the Manager or hosts. Storage-centric leases are written to a special logical volume in the master storage domain called leases. Metadata about the structure of the data domain is written to a special logical volume called metadata. Changes to the metadata logical volume are protected against by the leases logical volume.
The Manager uses VDSM to issue the spmStart command to a host, causing VDSM on that host to attempt to assume the storage-centric lease. If the host is successful it becomes the SPM and retains the storage-centric lease until the Red Hat Virtualization Manager requests that a new host assume the role of SPM.
The Manager moves the SPM role to another host if: 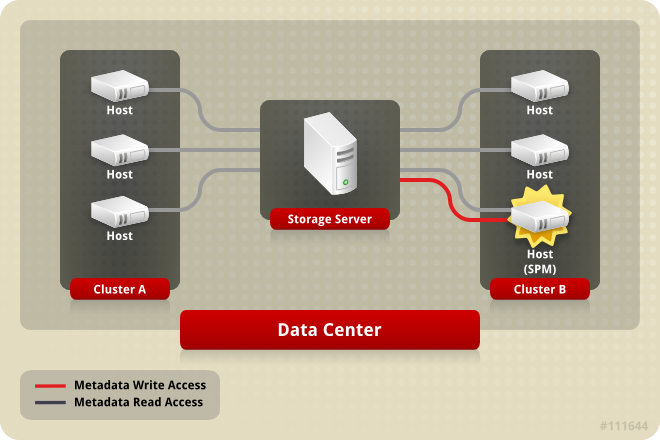