Before deploying Red Hat Single Sign-On in a production environment you need to decide which type of operating mode you are going to use. Will you run Red Hat Single Sign-On within a cluster? Do you want a centralized way to manage your server configurations? Your choice of operating mode effects how you configure databases, configure caching and even how you boot the server.

The Red Hat Single Sign-On is built on top of the JBoss EAP Application Server. This guide will only go over the basics for deployment within a specific mode. If you want specific information on this, a better place to go would be the JBoss EAP Configuration Guide

Standalone operating mode is only useful when you want to run one, and only one Red Hat Single Sign-On server instance. It is not usable for clustered deployments and all caches are non-distributed and local-only. It is not recommended that you use standalone mode in production as you will have a single point of failure. If your standalone mode server goes down, users will not be able to log in. This mode is really only useful to test drive and play with the features of Red Hat Single Sign-On

When running the server in standalone mode, there is a specific script you need to run to boot the server depending on your operating system. These scripts live in the bin/ directory of the server distribution. 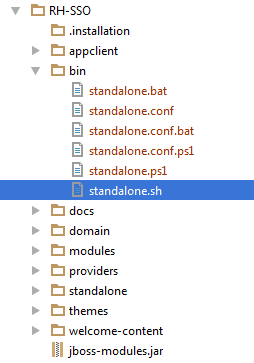 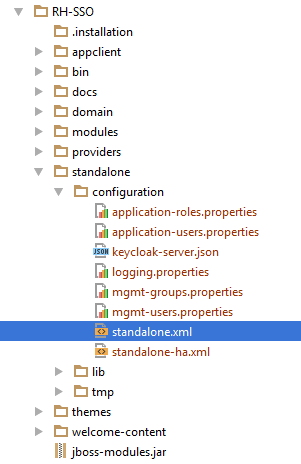 Any changes you make to this file while the server is running will not take effect and may even be overwritten by the server. Instead use the the command line scripting or the web console of JBoss EAP. See the JBoss EAP Configuration Guide for more information. 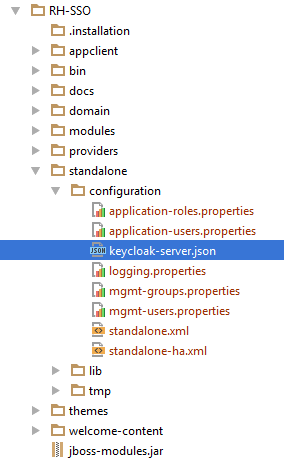 Any changes you make to this file while the server is running will not take effect. You’ll need to reboot the server.

Standalone clustered operation mode is for when you want to run Red Hat Single Sign-On within a cluster. This mode requires that you have a copy of the Red Hat Single Sign-On distribution on each machine you want to run a server instance. This mode can be very easy to deploy initially, but can become quite cumbersome. To make a configuration change you’ll have to modify each distribution on each machine. For a large cluster this can become time consuming and error prone.

The distribution has a mostly pre-configured app server configuration file for running within a cluster. It has all the specific infrastructure settings for networking, databases, caches, and discovery. This file resides in …​/standalone/configuration/standalone-ha.xml. There’s a few things missing from this configuration. You can’t run Red Hat Single Sign-On in a cluster without a configuring a shared database connection. You also need to deploy some type of load balancer in front of the cluster. The clustering and database sections of this guide walk you though these things. 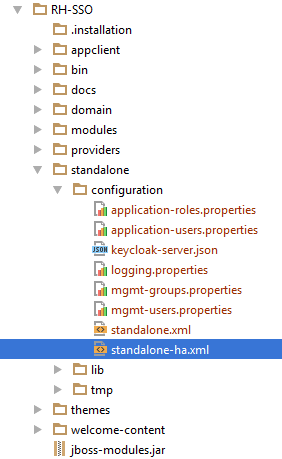 Any changes you make to this file while the server is running will not take effect and may even be overwritten by the server. Instead use the the command line scripting or the web console of JBoss EAP. See the JBoss EAP Configuration Guide for more information.

You use the same boot scripts to start Red Hat Single Sign-On as you do in standalone mode. The difference is that you pass in an additional flag to point to the HA config file.

The Red Hat Single Sign-On specific json configure file resides in the same place as in standalone mode: …​/standalone/configuration/keycloak.json. Like standalone-ha.xml you have to modify this file in each distribution in your cluster when you want to make a change here.

Any changes you make to this file while the server is running will not take effect. You’ll need to reboot the server.

Domain mode is a way to centrally manage and publish the configuration for your servers.

Running a cluster in standard mode can quickly become aggravating as the cluster grows in size. Every time you need to make a configuration change, you have perform it on each node in the cluster. Domain mode solves this problem by providing a central place to store and publish configuration. It can be quite complex to set up, but it is worth it in the end. This capability is built into the JBoss EAP Application Server which Red Hat Single Sign-On derives from.

The guide will go over the very basics of domain mode. Detailed steps on how to set up domain mode in a cluster should be obtained from the JBoss EAP Configuration Guide.

Here are some of the basic concepts of running in domain mode.

Various other chapters in this guide walk you through configuring various aspects like databases, HTTP network connections, caches, and other infrastructure related things. While standalone mode uses the standalone.xml file to configure these things, domain mode uses the …​/domain/configuration/domain.xml configuration file. This is where the domain profile and server group for the Red Hat Single Sign-On server are defined. 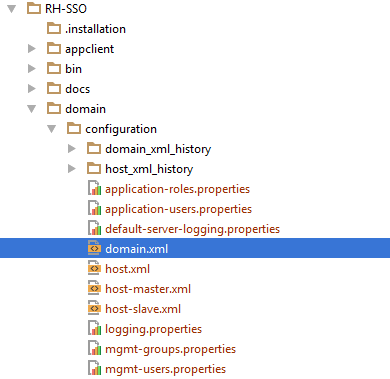 Any changes you make to this file while the domain controller is running will not take effect and may even be overwritten by the server. Instead use the the command line scripting or the web console of JBoss EAP. See the JBoss EAP Configuration Guide for more information.

Let’s look at some aspects of this domain.xml file. The auth-server-standalone and auth-server-clustered profile XML blocks are where you are going to make the bulk of your configuration decisions. You’ll be configuring things here like network connections, caches, and database connections.

If you scroll down further, you’ll see various socket-binding-groups defined.

This config defines the default port mappings for various connectors that are opened with each Red Hat Single Sign-On server instance. Any value that contains ${…​} is a value that can be overriden on the command line with the -D switch, i.e.

The definition of the server group for Red Hat Single Sign-On resides in the server-groups XML block. It specifies the domain profile that is used (default) and also some default boot arguments for the Java VM when the host controller boots an instance. It also binds a socket-binding-group to the server group.

The load balancer is not a required service. It exists so that you can easily test drive clustering on your development machine. While usable in production, you have the option of replacing it if you have a different hardware or software based load balancer you want to use. 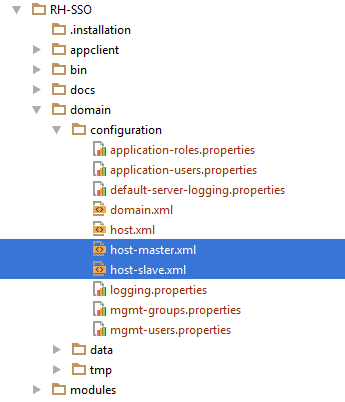 To disable the load balancer server instance, edit host-master.xml and comment out or remove the "load-balancer" entry.

Another interesting thing to note about this file is the declaration of the authentication server instance. It has a port-offset setting. Any network port defined in the domain.xml socket-binding-group or the server group will have the value of port-offset added to it. For this example domain setup we do this so that ports opened by the load balancer server don’t conflict with the authentication server instance that is started.

Each Red Hat Single Sign-On server instance defined in your host files creates a working directory under …​/domain/servers/{SERVER NAME}. Additional configuration can be put there, and any temporary, log, or data files the server instance needs or creates go there too. The structure of these per server directories ends up looking like any other JBoss EAP booted server. 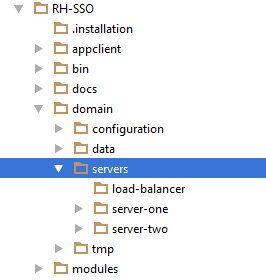 Unfortunately, there is no centralized way to manage the keycloak.json file. You’ll have to manage a copy of this file in every server instance you deploy. This file must exist in the …​/domain/servers/{SERVER NAME}/configuration directory. 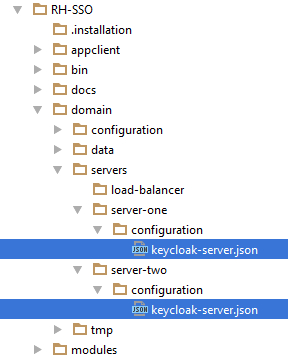 When running the server in domain mode, there is a specific script you need to run to boot the server depending on your operating system. These scripts live in the bin/ directory of the server distribution. 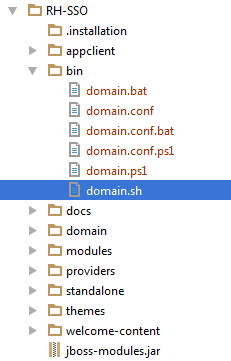 When running the boot script you will need pass in the host controlling configuration file you are going to use via the --host-config switch.

You can test drive clustering using the out-of-the-box domain.xml configuration. This example domain is meant to run on one machine and boots up:

Before you can boot things up though, you have to configure the slave host controller so that it can talk securely to the domain controller. If you do not do this, then the slave host will not be able to obtain the centralized configuration from the domain controller. To set up a secure connection, you have to create a server admin user and a secret that will be shared between the master and the slave. You do this by running the …​/bin/add-user.sh script.

When you run the script select Management User and answer yes when it asks you if the new user is going to be used for one AS process to connect to another. This will generate a secret that you’ll need to cut and paste into the …​/domain/configuration/host-slave.xml file.

The add-user.sh does not add user to Red Hat Single Sign-On server but to the underlying JBoss Enterprise Application Platform. The credentials used and generated in the above script are only for example purpose. Please use the ones generated on your system.

Now cut and paste the secret value into the …​/domain/configuration/host-slave.xml file as follows:

To try it out, open your browser and go to http://localhost:8080/auth