Red Hat Satellite 5 is life cycle management tool that includes the ability to deploy, manage and monitor a large number of systems. Satellite 5 can be set up in a connected or disconnected mode in which Red Hat software is distributed to client systems using the original pooled subscription approach. The pooled subscription concept is similar to the way in which clients consume entitlements from Red Hat Network Classic.

The popular functionality of Satellite 5 includes the ability to provision a large number of systems using kickstart files and activation keys to install and configure systems to a predictable state. This provisioning process associates systems to designated organizations, software and configuration channels, as well as placing systems in predefined system groups. The Satellite 5 provisioning functionality enables administrators to provision thousands of systems in a consistent manner.

Red Hat Satellite 5 provides organizations with the benefits of Red Hat Network without the need for public Internet access for servers or client systems. This brings together the tools, services, and information repositories needed to maximize the reliability, security, and performance of your systems.

Red Hat Satellite 6 is the evolution of Red Hat’s life cycle management platform. It provides the capabilities that administrators have come to expect in a tool focused on managing systems and content for a global enterprise. Satellite 6 covers the use cases requested by Satellite 5 customers, but also includes functionality that enables larger scale, federation of content, better control of systems during the provisioning process, and a much more simplified approach to life cycle management. Satellite 6 also further evolves the inherent approach to certificate-based entitlements and integrated subscription management.

The following table outlines some key concepts and their respective implementation in both Satellite 5 and Satellite 6.

Red Hat Satellite 5 is based on an open source project called Spacewalk and is comprised of several key components arranged in the following architecture. 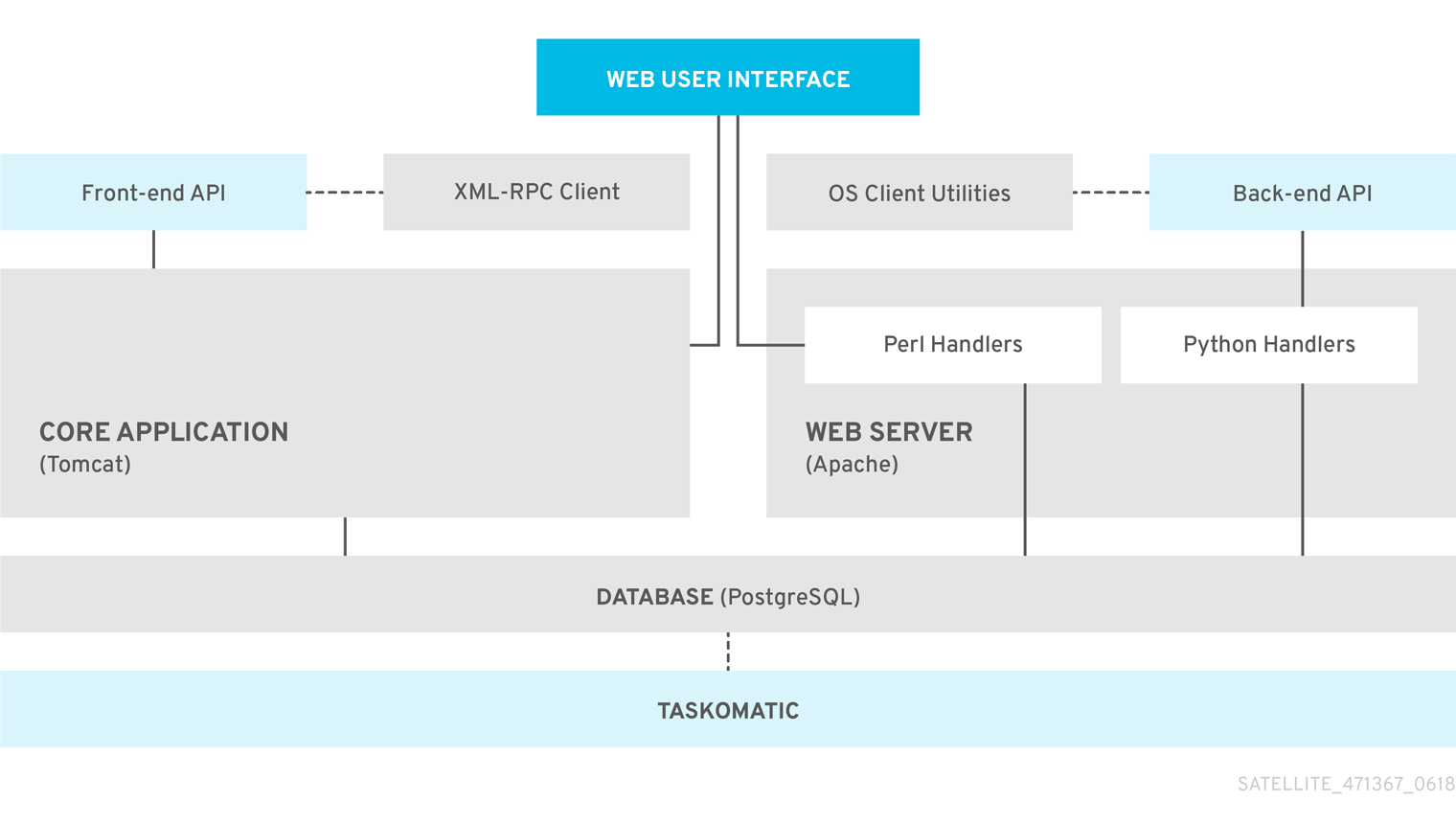 Front-end API
The front-end API provides the ability to interact with Satellite 5 through an XML-RPC API. This allows system administrators to write scripts to perform repetitive tasks, or develop third-party applications around Satellite. The front-end API exposes most of the web UI functionality using XML-RPC.

Back-end API
The back end provides a set of APIs that the different client utilities (rhn_register, yum) connect to. These are not documented and are used solely by the client utilities.

Taskomatic
Taskomatic is a separate service within Red Hat Satellite 5 that runs various asynchronous jobs, such as cleaning up the sessions table, or sending email notifications for new errata. The majority of these jobs run periodically, and you can adjust the frequency with which they occur.

Search Server
Satellite contains a standalone search server that runs as a daemon that allows you to quickly find a system, package, or errata, as opposed to paging through hundreds of items in a list. It uses Apache’s Lucene search engine library, which provides more relevant search results and a richer query language.

Red Hat Satellite 6 is based upon several open source projects arranged in the following architecture. 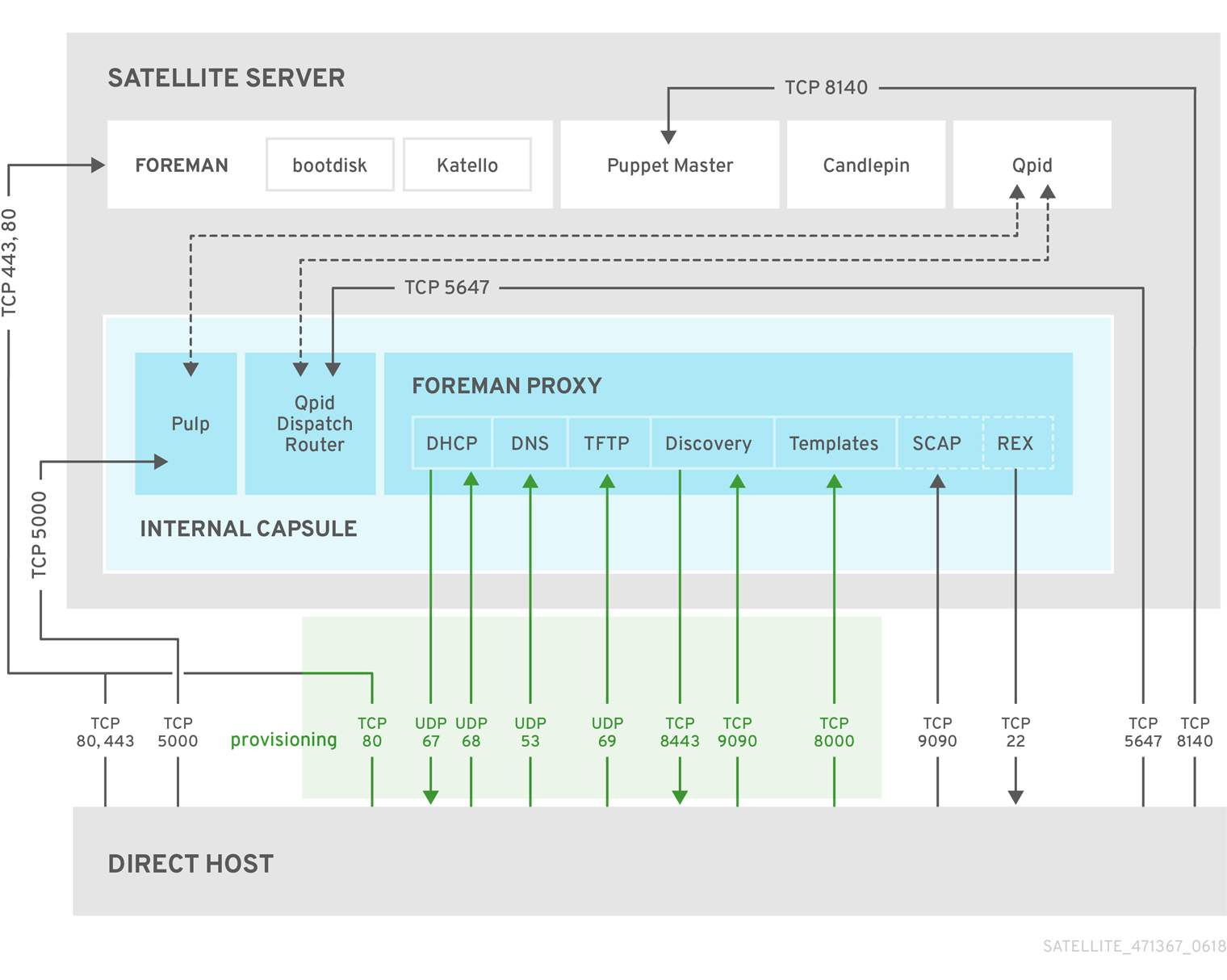 Katello
Katello is a subscription and repository management application. It provides a means to subscribe to Red Hat repositories and download content. You can create and manage different versions of this content and apply them to specific systems within user-defined stages of the application life cycle.

Candlepin
Candlepin is a service within Katello that handles subscription management.

Pulp
Pulp is a service within Katello that handles repository and content management.

Hammer
Hammer is a CLI tool that provides command line and shell equivalents of most web UI functions.

Note that Red Hat Satellite 6 can be installed only on x86_64 architecture systems.

You cannot tier Capsule Servers the same way you can with Proxy servers. You can see this in the following illustration. 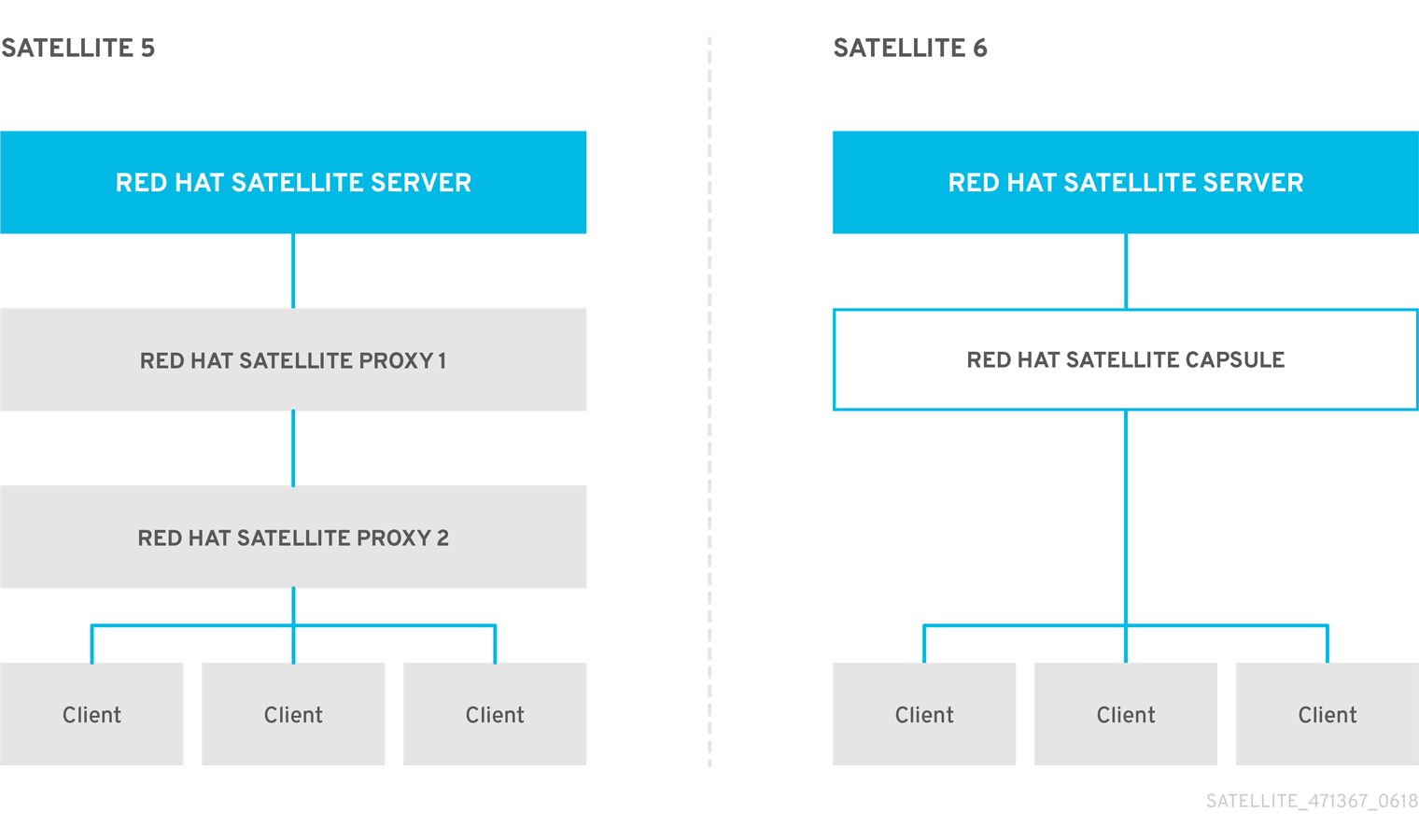 The first release of Capsule Servers, delivered with Satellite 6.0, can provide the following functionality:

A key difference between Satellite 5 and Satellite 6 is in the area of "disconnected" content management. Both versions of Satellite can provision and keep hosts synchronized without direct connection to the Internet, but the way they achieve this is slightly different.

The synchronization host imports content from the Red Hat Content Delivery Network (CDN). The content is then exported onto a media, such as DVDs, CDs, or external hard drives and transferred to the disconnected Satellite Server.

Red Hat Satellite 5 can group systems, content, and configuration into multiple and distinct organizations. This is useful for companies with multiple divisions, such a Finance, Marketing, Sales, and so forth. Each organization acts as an individually managed Satellite, each with their own configuration and system profiles. However, Satellite can share content (software channels) among multiple organizations.

Red Hat Satellite 5 also has the ability to synchronize content across multiple Satellite Servers. This allows administrators to provide geographically dispersed Satellites that share the same software channels. For example, a company might have offices in three separate locations and each might require a Satellite, but synchronizing content from a chosen parent Satellite Server.

All systems management operations occur on the Satellite to which they are registered.

Red Hat Satellite 6 takes a consolidated approach to Organization and Location management. System administrators define multiple Organizations and multiple Locations in a single Satellite Server. For example, a company might have three Organizations (Finance, Marketing, and Sales) across three countries (United States, United Kingdom, and Japan). In this example, the Satellite Server manages all Organizations across all geographical Locations, creating nine distinct contexts for managing systems. In addition, users can define specific locations and nest them to create a hierarchy. For example, Satellite administrators might divide the United States into specific cities, such as Boston, Phoenix, or San Francisco. 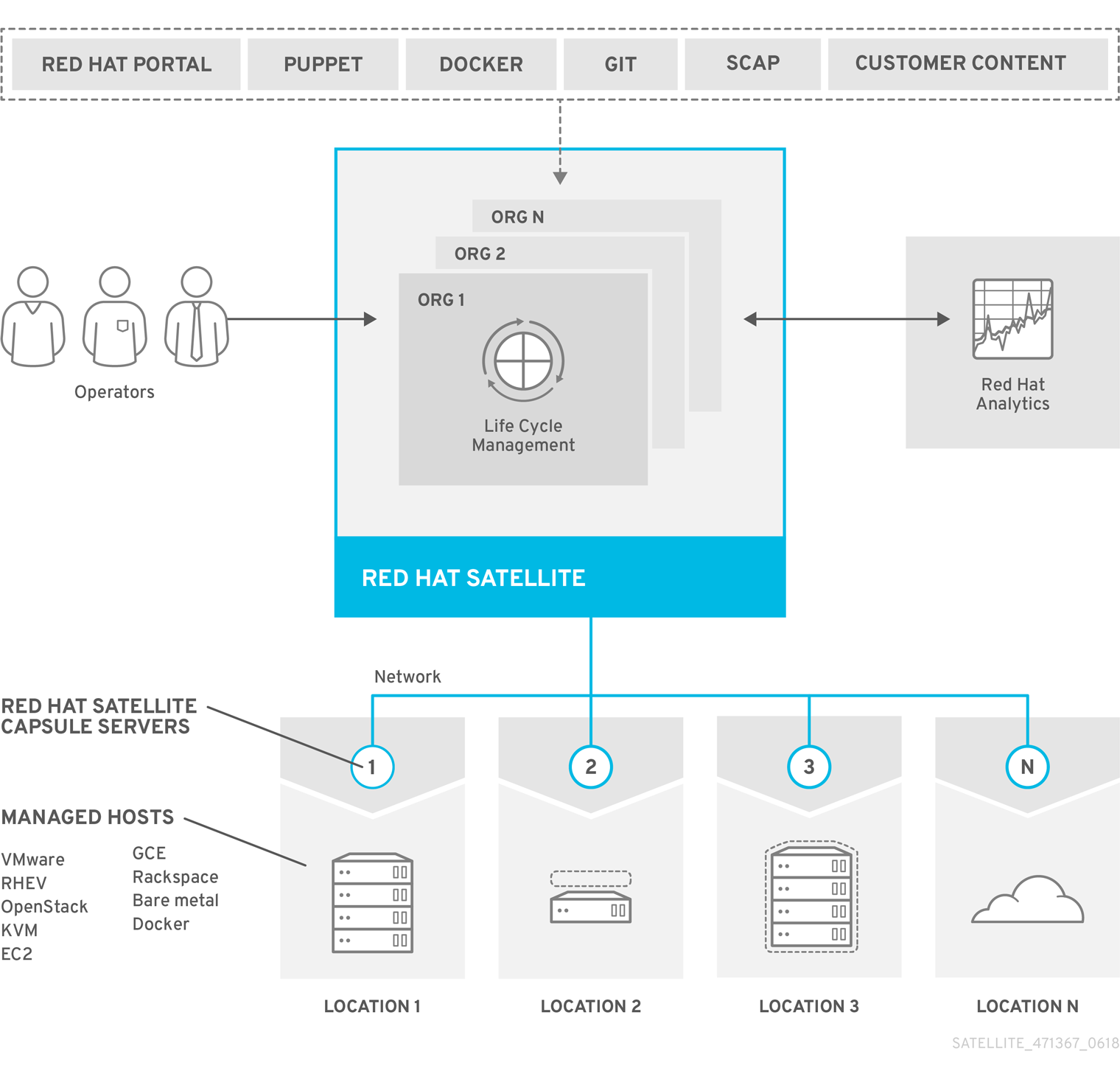 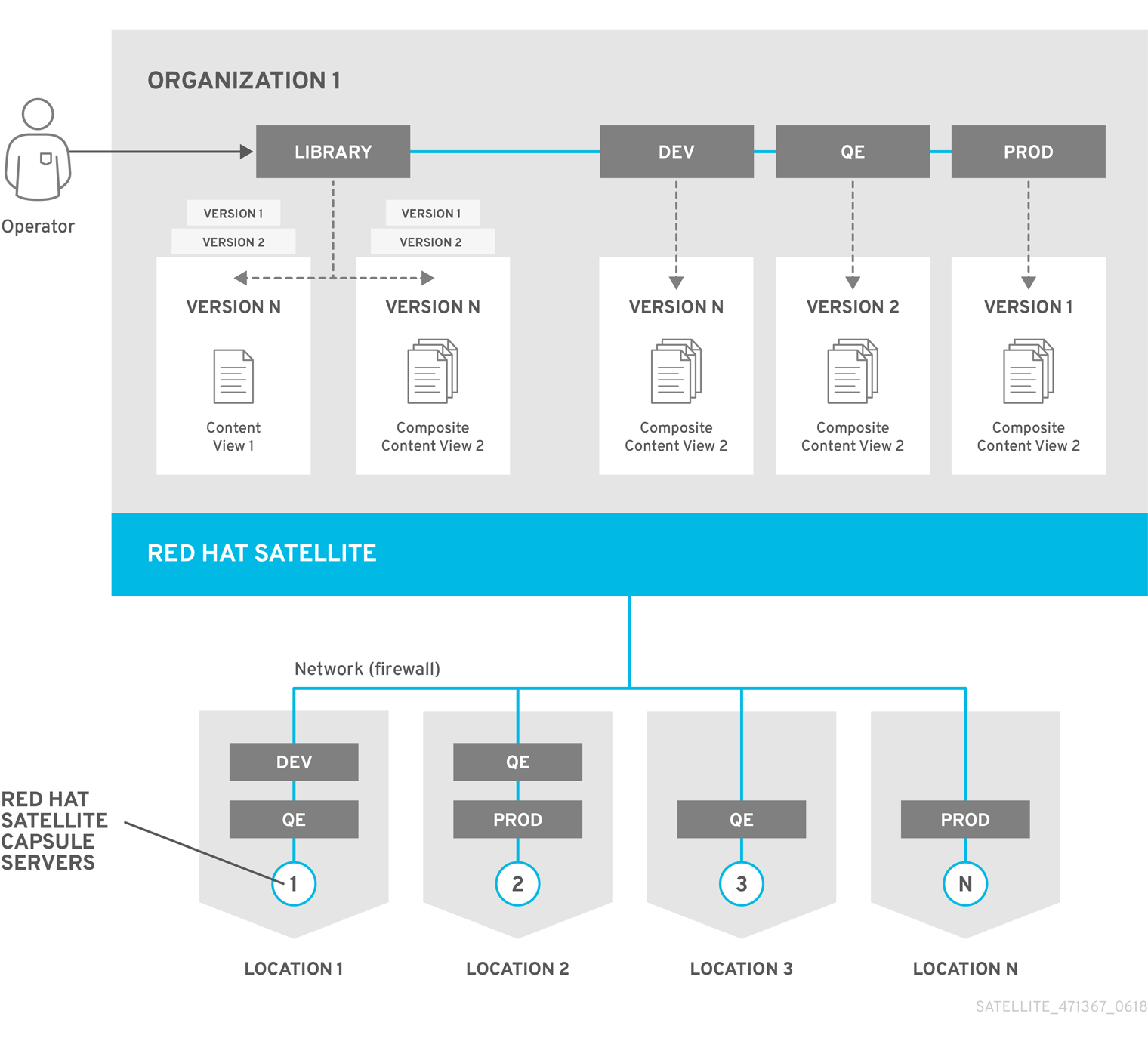 Content views are managed selections of content, which contain one or more yum or Puppet repositories with optional filtering. These filters can be either inclusive or exclusive, and tailor a system view of content for life-cycle management. They are used to customize content to be made available to client systems. Content view versions are promoted along an environment path during the application life cycle. Published content views are used with life cycle environments.