2.3.1. Modeling your Satellite for Multi-Organization Use

2.3.1.1. Centrally-Managed Satellite for A Multi-Department Organization 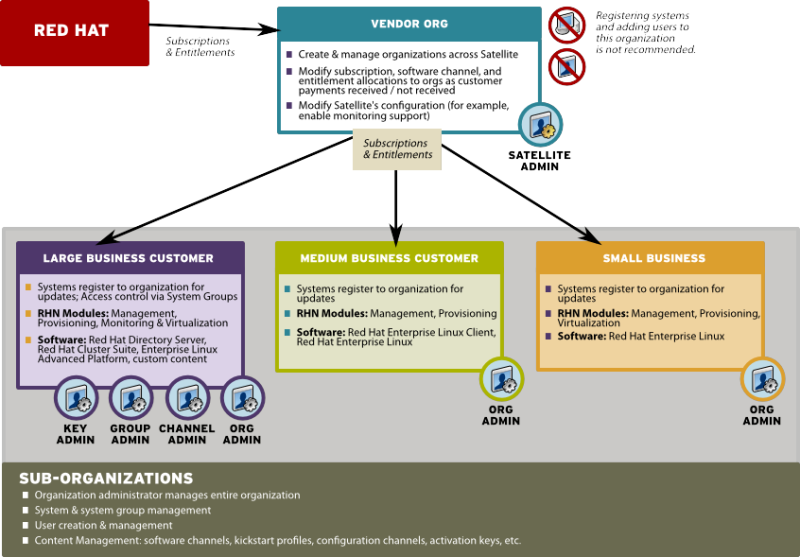 2.3.1.3. Recommendations for Multi-Organization Use

Regardless of the specific model you choose in the management of your multi-organization Satellite, these recommendations should be noted.
Administrative organizations (organization #1) should not be used to register systems and create users in any situation, unless you intend to:
This is due to the following reasons:

2.3.2. Configuring Systems in an Organization

Now that an organization has been created and requisite entitlements assigned to it, you can then assign systems to each organization.
There are two basic ways to register a system against a particular organization:

Once an organizational trust has been established, organizations can now share content such as custom software channels with the other organizations in the trust. There are also three levels of channel sharing that can be applied to each channel for finer-grained channel access control.

Organizations cannot share Red Hat Channels because they are available to all organizations that have entitlements to those channels.
To share a custom channel with another organization, perform the following steps:
Now, any other Organization Administrators within the trust for which you have granted access to your custom channel can allow their client systems to install and update packages from the shared channel.

2.3.3.3. Migrating Systems from One Trusted Organization to Another

In addition to sharing software channels, organizations in a trust can migrate systems to other trusted organizations. There are two methods of doing this, one through the Satellite web interface and the other, by using a utility called migrate-system-profile.

Procedure 2.1. To Migrate a System Between Organizations:

When an organization migrates a system with the migrate-system-profile command, the system does not carry any of the previous entitlements or channel subscriptions from the source organization. However, the system's history is preserved, and can be accessed by the new Organization Administrator in order to simplify the rest of the migration process, which includes subscribing to a base channels and granting entitlements.
Verify the ID of the system to be migrated, the ID of the organization the system will migrate to, and the hostname or IP address of the Satellite server if you are running the command from another machine.

Find the system ID and organization ID using either the Web UI or the spacewalk-report tool.
Once you have this data, the usage from the command line is as follows:

Example 2.1. Migration from one department to another