The Quay Operator should be installed and upgraded using the Operator Lifecycle Manager (OLM). When creating a Subscription with the default approvalStrategy: Automatic, OLM will automatically upgrade the Quay Operator whenever a new version becomes available.

When the Quay Operator is installed via Operator Lifecycle Manager, it may be configured to support automatic or manual upgrades. This option is shown on the Operator Hub page for the Quay Operator during installation. It can also be found in the Quay Operator Subscription object via the approvalStrategy field. Choosing Automatic means that your Quay Operator will automatically be upgraded whenever a new Operator version is released. If this is not desirable, then the Manual approval strategy should be selected.

In general, Red Hat Quay supports upgrades from a prior (N-1) minor version only. For example, upgrading directly from Red Hat Quay 3.0.5 to the latest version of 3.5 is not supported. Instead, users would have to upgrade as follows:

This is required to ensure that any necessary database migrations are done correctly and in the right order during the upgrade.

In some cases, Red Hat Quay supports direct, single-step upgrades from prior (N-2, N-3) minor versions. This exception to the normal, prior minor version-only, upgrade simplifies the upgrade procedure for customers on older releases. The following upgrade paths are supported:

For users on standalone deployments of Quay wanting to upgrade to 3.8, see the Standalone upgrade guide.

To update Quay from one minor version to the next, for example, 3.4 → 3.5, you need to change the update channel for the Quay Operator.

For z stream upgrades, for example, 3.4.2 → 3.4.3, updates are released in the major-minor channel that the user initially selected during install. The procedure to perform a z stream upgrade depends on the approvalStrategy as outlined above. If the approval strategy is set to Automatic, the Quay Operator will upgrade automatically to the newest z stream. This results in automatic, rolling Quay updates to newer z streams with little to no downtime. Otherwise, the update must be manually approved before installation can begin.

If possible, you should regenerate your TLS certificates with the correct hostname in the SANs. A possible workaround involves defining an environment variable in the quay-app, quay-upgrade and quay-config-editor pods after upgrade to enable CommonName matching:

The GODEBUG=x509ignoreCN=0 flag enables the legacy behavior of treating the CommonName field on X.509 certificates as a host name when no SANs are present. However, this workaround is not recommended, as it will not persist across a redeployment.

For instructions on setting up Clair v4 on OpenShift, see Setting Up Clair on a Red Hat Quay OpenShift deployment.

When upgrading from Red Hat Quay 3.3.z to 3.6.z, some users might receive the following error: Switch auth v3 requires tenant_id (string) in os_options. As a workaround, you can manually update your DISTRIBUTED_STORAGE_CONFIG to add the os_options and tenant_id parameters:

2.2.4. Changing the update channel for an Operator

The subscription of an installed Operator specifies an update channel, which is used to track and receive updates for the Operator. To upgrade the Quay Operator to start tracking and receiving updates from a newer channel, change the update channel in the Subscription tab for the installed Quay Operator. For subscriptions with an Automatic approval strategy, the upgrade begins automatically and can be monitored on the page that lists the Installed Operators.

If an installed Operator has the approval strategy in its subscription set to Manual, when new updates are released in its current update channel, the update must be manually approved before installation can begin. If the Quay Operator has a pending upgrade, this status will be displayed in the list of Installed Operators. In the Subscription tab for the Quay Operator, you can preview the install plan and review the resources that are listed as available for upgrade. If satisfied, click Approve and return to the page that lists Installed Operators to monitor the progress of the upgrade.

The following image shows the Subscription tab in the UI, including the update Channel, the Approval strategy, the Upgrade status and the InstallPlan: 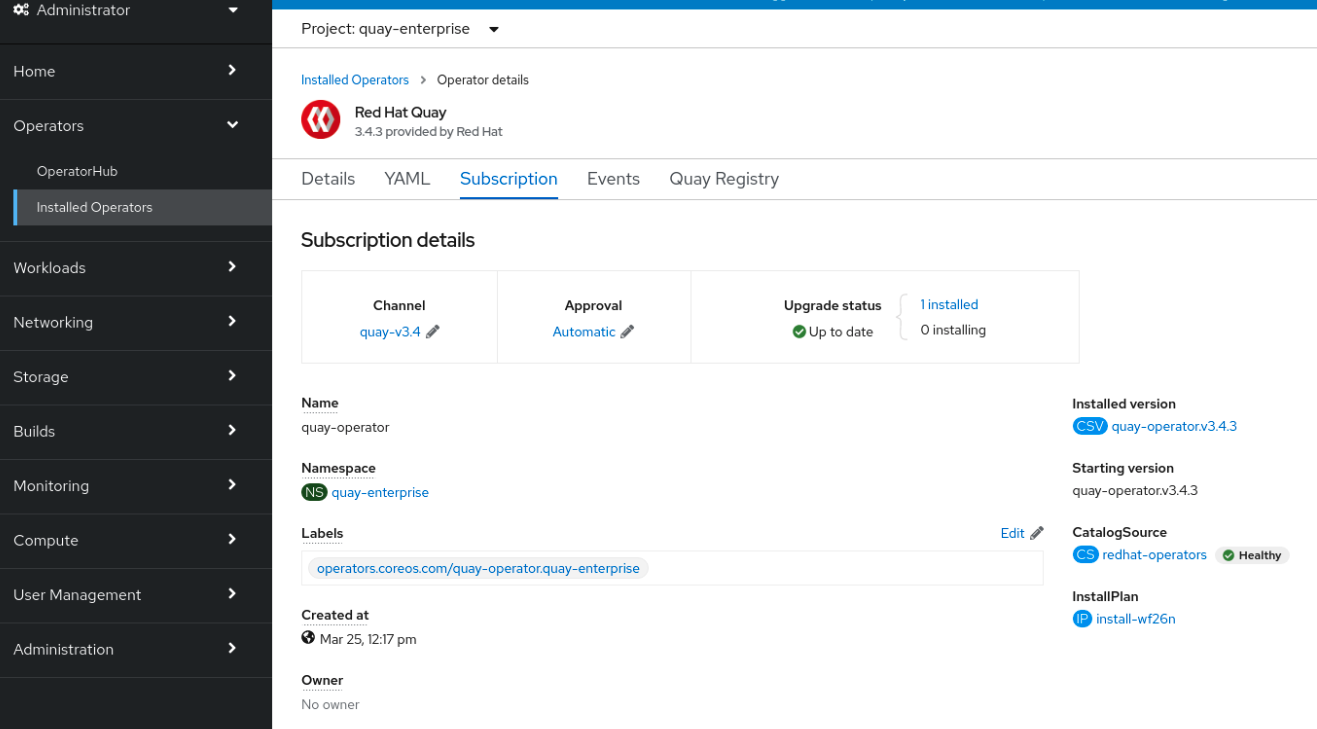 The list of Installed Operators provides a high-level summary of the current Quay installation:

When the Quay Operator starts, it immediately looks for any QuayRegistries it can find in the namespace(s) it is configured to watch. When it finds one, the following logic is used:

If something goes wrong during the automatic upgrade from QuayEcosystem to QuayRegistry, follow these steps to revert back to using the QuayEcosystem:

If your QuayEcosystem was managing the Postgres database, the upgrade process will migrate your data to a new Postgres database managed by the upgraded Operator. Your old database will not be changed or removed but Quay will no longer use it once the migration is complete. If there are issues during the data migration, the upgrade process will exit and it is recommended that you continue with your database as an unmanaged component.

The Quay Operator will report errors in its logs and in status.conditions if migrating a QuayEcosystem component fails or is unsupported. All unmanaged components should migrate successfully because no Kubernetes resources need to be adopted and all the necessary values are already provided in Quay’s config.yaml.

Ephemeral database not supported (volumeSize field must be set).

Only passthrough Route access is supported for automatic migration. Manual migration required for other methods.