Geo-replication allows multiple, geographically distributed Red Hat Quay deployments to work as a single registry from the perspective of a client or user. It significantly improves push and pull performance in a globally-distributed Red Hat Quay setup. Image data is asynchronously replicated in the background with transparent failover / redirect for clients.

If the above requirements cannot be met, you should instead use two or more distinct Quay deployments and take advantage of repository mirroring functionality. 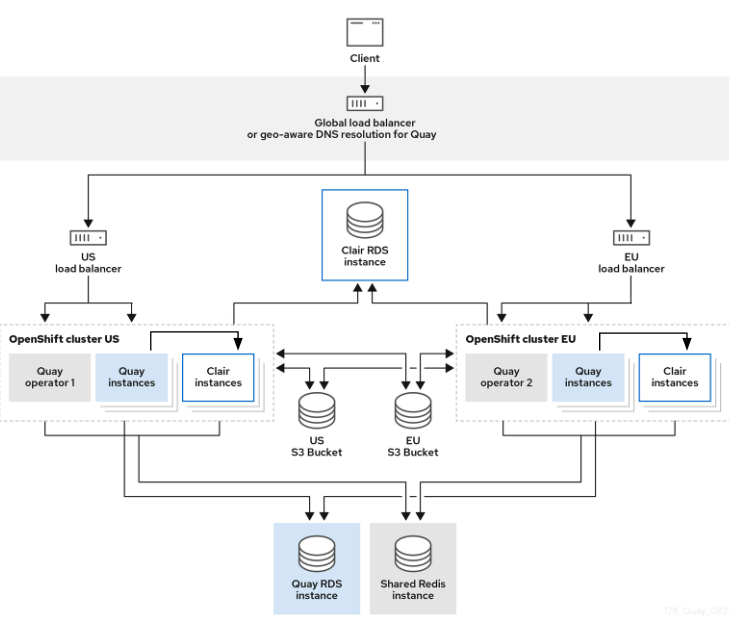 In the example shown above, the Red Hat Quay Operator is deployed in two separate regions, with a common database and a common Redis instance. Localized image storage is provided in each region and image pulls are served from the closest available storage engine. Container image pushes are written to the preferred storage engine for the Quay instance, and will then be replicated, in the background, to the other storage engines.

Because the Operator now manages the Clair security scanner and its database separately, geo-replication setups can be leveraged so that they do not manage the Clair database. Instead, an external shared database would be used. Red Hat Quay and Clair support several providers and vendors of PostgreSQL, which can be found in the Quay Enterprise 3.x test matrix. Additionally, the Operator also supports custom Clair configurations that can be injected into the deployment, which allows users to configure Clair with the connection credentials for the external database.

10.3.1. Setting up geo-replication on Openshift

The config.yaml file is shared between clusters, and will contain the details for the common PostgreSQL, Redis and storage backends:

1
To retrieve the configuration file for a Clair instance deployed using the OpenShift Operator, see Retrieving the Clair config.

In each of the clusters, set the configBundleSecret and use the QUAY_DISTRIBUTED_STORAGE_PREFERENCE environmental variable override to configure the appropriate storage for that cluster:

The config.yaml file between both deployments must match. If making a change to one cluster, it must also be changed in the other.

Red Hat Quay geo-replication supports the use of different and multiple replication targets, for example, using AWS S3 storage on public cloud and using Ceph storage on-prem. This complicates the key requirement of granting access to all storage backends from all Red Hat Quay pods and cluster nodes. As a result, it is recommended that you:

This will result in the public cloud instance of Red Hat Quay having access to on-prem storage but the network will be encrypted, protected, and will use ACLs, thereby meeting security requirements.

If you cannot implement these security measures, it may be preferable to deploy two distinct Red Hat Quay registries and to use repository mirroring as an alternative to geo-replication.