Container registries such as Red Hat Quay were originally designed to support container images in the Docker image format. To promote the use of additional runtimes apart from Docker, the Open Container Initiative (OCI) was created to provide a standardization surrounding container runtimes and image formats. Most container registries support the OCI standardization as it is based on the Docker image manifest V2, Schema 2 format.

In addition to container images, a variety of artifacts have emerged that support not just individual applications, but the Kubernetes platform as a whole. These range from Open Policy Agent (OPA) policies for security and governance to Helm charts and Operators to aid in application deployment.

Red Hat Quay is a private container registry that not only stores container images, but supports an entire ecosystem of tooling to aid in the management of containers. With the release of Red Hat Quay 3.5, support for the use of OCI based artifacts, and specifically Helm Charts, has graduated from Technical Preview (TP) and now has General Availability (GA) status.

When Red Hat Quay 3.5 is deployed using the OpenShift Operator, support for Helm and OCI artifacts is now enabled by default. If you need to explicitly enable the feature, for example, if it has previously been disabled or if you have upgraded from a version where it is not enabled by default, see the section Explicitly enabling OCI and Helm support.

Helm, as a graduated project of the Cloud Native Computing Foundation (CNCF), has become the de facto package manager for Kubernetes as it simplifies how applications are packaged and deployed. Helm uses a packaging format called Charts which contain the Kubernetes resources representing an application. Charts can be made available for general distribution and consumption in repositories. A Helm repository is an HTTP server that serves an index.yaml metadata file and optionally a set of packaged charts. Beginning with Helm version 3, support was made available for distributing charts in OCI registries as an alternative to a traditional repository. To demonstrate how Quay can be used as a registry for Helm charts, an existing chart from a Helm repository will be used to showcase the interaction with OCI registries for chart developers and users.

In the following example, a sample etherpad chart is downloaded from from the Red Community of Practice (CoP) repository and pushed to a local Red Hat Quay repository using the following steps:

Tagging the chart requires use of the helm chart save command - this corresponds to using podman tag for tagging images.

Use the helm chart list command to see the local instance of the chart:

Before pushing the chart, log in to the repository using the helm registry login command:

To test that the push worked, delete the local copy and then pull the chart from the repository:

Use the helm chart export command to extract the chart files:

6.1.4. Configuring OCI and Helm with the Operator

Create the secret in the appropriate namespace, in this example quay-enterprise:

Specify the secret for the spec.configBundleSecret field:

Create the registry with the specified configuration:

Red Hat Quay 3.5 provides support for monitoring Quay instances that were deployed using the Operator, from inside the OpenShift console. The new monitoring features include a Grafana dashboard, access to individual metrics, and alerting to notify for frequently restarting Quay pods.

To automatically enable the monitoring features, the Operator must be installed in "all namespaces" mode.

If the Operator is installed in a single namespace, the monitoring component must be set to unmanaged. In this instance, you will need to enable monitoring in OpenShift Container Platform (OCP) for the specific namespace. For more information, see the OCP documentation at https://docs.openshift.com/container-platform/4.7/monitoring/enabling-monitoring-for-user-defined-projects.html

In the OpenShift console, navigate to Monitoring → Dashboards and search for the dashboard of your desired Quay registry instance: 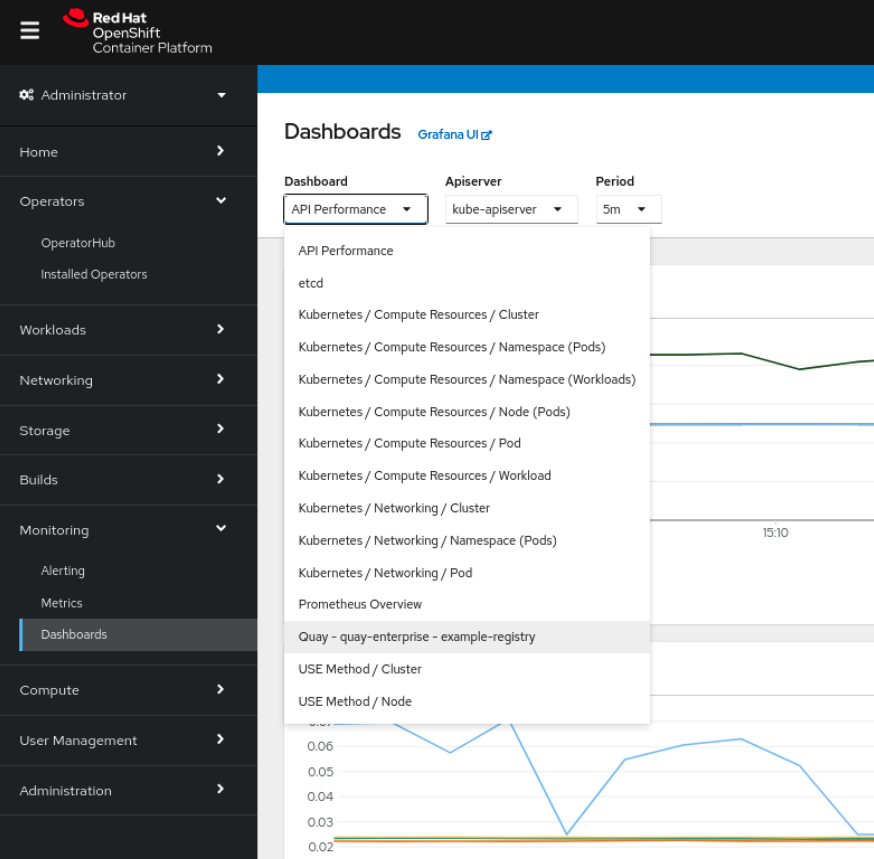 The dashboard shows various statistics including: 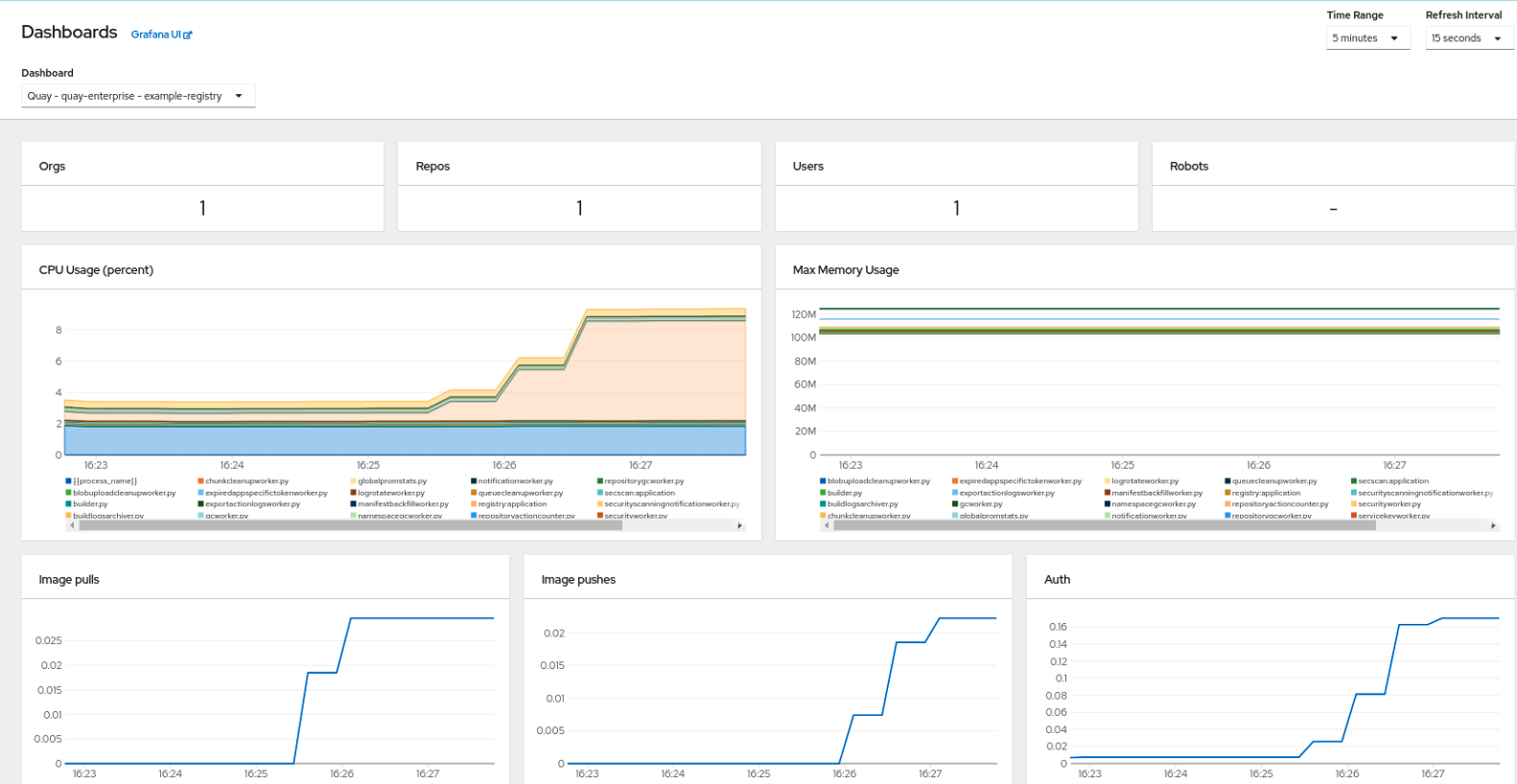 You can see the underlying metrics behind the Quay dashboard, by accessing Monitoring → Metrics in the UI. In the Expression field, enter the text quay_ to see the list of metrics available: 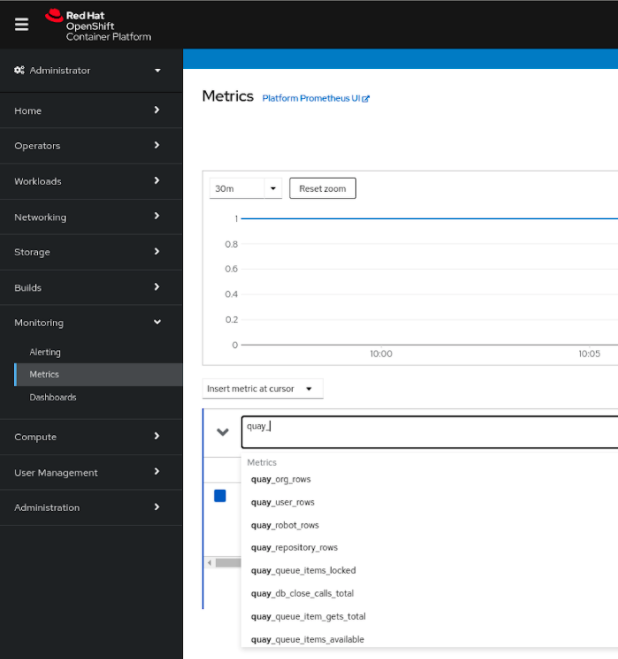 This metric shows the number of organizations in the registry, and it is directly surfaced in the dashboard as well.

An alert is raised if the Quay pods restart too often. The alert can be configured by accessing the Alerting rules tab from Monitoring → Alerting in the consol UI and searching for the Quay-specific alert: 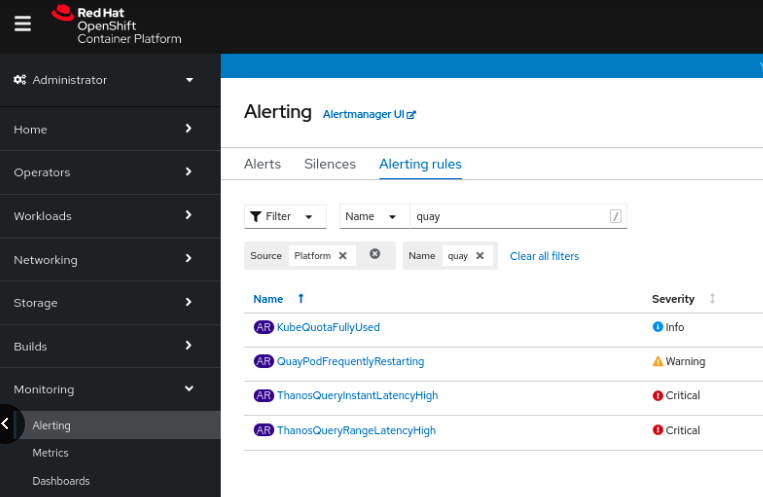 Select the QuayPodFrequentlyRestarting rule detail to configure the alert:

6.3. Manually updating the vulnerability databases for Clair in an air-gapped OpenShift cluster

Clair utilizes packages called updaters that encapsulate the logic of fetching and parsing different vulnerability databases. Clair supports running updaters in a different environment and importing the results. This is aimed at supporting installations that disallow the Clair cluster from talking to the Internet directly.

To manually update the vulnerability databases for Clair in an air-gapped OpenShift cluster, use the following steps:

To obtain the clairctl program from a Clair deployment in an OpenShift cluster, use the oc cp command, for example:

For a standalone Clair deployment, use the podman cp command, for example:

To retrieve the configuration file for a Clair instance deployed using the OpenShift Operator, retrieve and decode the config secret using the appropriate namespace, and save it to file, for example:

An excerpt from a Clair configuration file is shown below:

For standalone Clair deployments, the config file is the one specified in CLAIR_CONF environment variable in the podman run command, for example:

From a Clair instance that has access to the internet, use clairctl with the appropriate configuration file to export the updaters bundle:

6.3.4. Configuring access to the Clair database in the air-gapped OpenShift cluster

As an alternative to using kubectl port-forward, you can use kubefwd instead. With this method, there is no need to modify the connstring field in the Clair configuration file to use localhost.

6.3.5. Importing the updaters bundle into the air-gapped environment

After transferring the updaters bundle to the air-gapped environment, use clairctl to import the bundle into the Clair database deployed by the OpenShift Operator:

FIPS (the Federal Information Processing Standard developed by the National Institute of Standards and Technology, NIST) is regarded as the gold standard for securing and encrypting sensitive data, particularly in heavily regulated areas such as banking, healthcare and the public sector. Red Hat Enterprise Linux and Red Hat OpenShift Container Platform support this standard by providing a FIPS mode in which the system would only allow usage of certain, FIPS-validated cryptographic modules, like openssl. This ensures FIPS compliance.