The decision engine in Red Hat Process Automation Manager uses the Phreak algorithm for rule evaluation. Phreak evolved from the Rete algorithm, including the enhanced Rete algorithm ReteOO that was introduced in previous versions of Red Hat Process Automation Manager for object-oriented systems. Overall, Phreak is more scalable than Rete and ReteOO, and is faster in large systems.

While Rete is considered eager (immediate rule evaluation) and data oriented, Phreak is considered lazy (delayed rule evaluation) and goal oriented. The Rete algorithm performs many actions during the insert, update, and delete actions in order to find partial matches for all rules. This eagerness of the Rete algorithm during rule matching requires a lot of time before eventually executing rules, especially in large systems. With Phreak, this partial matching of rules is delayed deliberately to handle large amounts of data more efficiently.

The Phreak algorithm adds the following set of enhancements to previous Rete algorithms:

When the decision engine starts, all rules are considered to be unlinked from pattern-matching data that can trigger the rules. At this stage, the Phreak algorithm in the decision engine does not evaluate the rules. The insert, update, and delete actions are queued, and Phreak uses a heuristic, based on the rule most likely to result in execution, to calculate and select the next rule for evaluation. When all the required input values are populated for a rule, the rule is considered to be linked to the relevant pattern-matching data. Phreak then creates a goal that represents this rule and places the goal into a priority queue that is ordered by rule salience. Only the rule for which the goal was created is evaluated, and other potential rule evaluations are delayed. While individual rules are evaluated, node sharing is still achieved through the process of segmentation.

Unlike the tuple-oriented Rete, the Phreak propagation is collection oriented. For the rule that is being evaluated, the decision engine accesses the first node and processes all queued insert, update, and delete actions. The results are added to a set, and the set is propagated to the child node. In the child node, all queued insert, update, and delete actions are processed, adding the results to the same set. The set is then propagated to the next child node and the same process repeats until it reaches the terminal node. This cycle creates a batch process effect that can provide performance advantages for certain rule constructs.

The linking and unlinking of rules happens through a layered bit-mask system, based on network segmentation. When the rule network is built, segments are created for rule network nodes that are shared by the same set of rules. A rule is composed of a path of segments. In case a rule does not share any node with any other rule, it becomes a single segment.

The same bit-mask technique is used to track modified nodes, segments, and rules. This tracking ability enables an already linked rule to be unscheduled from evaluation if it has been modified since the evaluation goal for it was created. As a result, no rules can ever evaluate partial matches.

This process of rule evaluation is possible in Phreak because, as opposed to a single unit of memory in Rete, Phreak has three layers of contextual memory with node, segment, and rule memory types. This layering enables much more contextual understanding during the evaluation of a rule.

The following examples illustrate how rules are organized and evaluated in this three-layered memory system in Phreak.

Example 2: Rule R2 is added and shares pattern A.

Pattern A is placed in its own segment, resulting in two segments for each rule. Those two segments form a path for their respective rules. The first segment is shared by both paths. When pattern A is linked, the segment becomes linked. The segment then iterates over each path that the segment is shared by, setting the bit 1 to on. If patterns B and C are later turned on, the second segment for path R1 is linked, and this causes bit 2 to be turned on for R1. With bit 1 and bit 2 turned on for R1, the rule is now linked and a goal is created to schedule the rule for later evaluation and execution.

When a rule is evaluated, the segments enable the results of the matching to be shared. Each segment has a staging memory to queue all inserts, updates, and deletes for that segment. When R1 is evaluated, the rule processes pattern A, and this results in a set of tuples. The algorithm detects a segmentation split, creates peered tuples for each insert, update, and delete in the set, and adds them to the R2 staging memory. Those tuples are then merged with any existing staged tuples and are executed when R2 is eventually evaluated.

Example 3: Rules R3 and R4 are added and share patterns A and B. 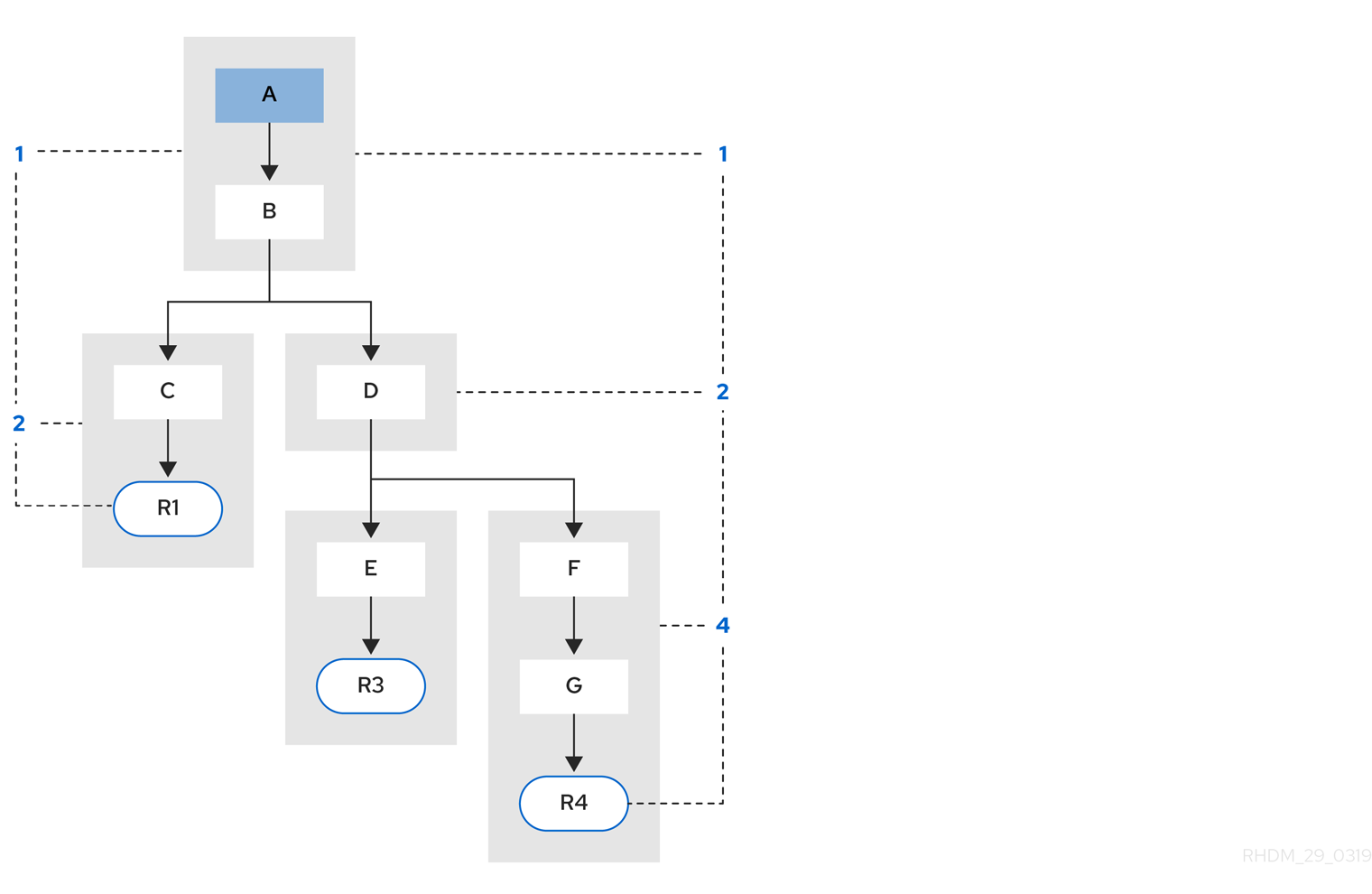 Rules R3 and R4 have three segments and R1 has two segments. Patterns A and B are shared by R1, R3, and R4, while pattern D is shared by R3 and R4.

Example 4: A single rule (R1) with a subnetwork and no pattern sharing.

Figure 5.5. Example 4: Single rule with a subnetwork and no pattern sharing

Subnetworks are formed when a Not, Exists, or Accumulate node contains more than one element. In this example, the element B not( C ) forms the subnetwork. The element not( C ) is a single element that does not require a subnetwork and is therefore merged inside of the Not node. The subnetwork uses a dedicated segment. Rule R1 still has a path of two segments and the subnetwork forms another inner path. When the subnetwork is linked, it is also linked in the outer segment.

Example 5: Rule R1 with a subnetwork that is shared by rule R2.

Figure 5.6. Example 5: Two rules, one with a subnetwork and pattern sharing

The subnetwork nodes in a rule can be shared by another rule that does not have a subnetwork. This sharing causes the subnetwork segment to be split into two segments.

Constrained Not nodes and Accumulate nodes can never unlink a segment, and are always considered to have their bits turned on.

The Phreak evaluation algorithm is stack based instead of method-recursion based. Rule evaluation can be paused and resumed at any time when a StackEntry is used to represent the node currently being evaluated.

The same stack system is used for efficient backward chaining. When a rule evaluation reaches a query node, the evaluation is paused and the query is added to the stack. The query is then evaluated to produce a result set, which is saved in a memory location for the resumed StackEntry object to pick up and propagate to the child node. If the query itself called other queries, the process repeats, while the current query is paused and a new evaluation is set up for the current query node.

The decision engine in Red Hat Process Automation Manager is a hybrid reasoning system that uses both forward chaining and backward chaining to evaluate rules. A forward-chaining rule system is a data-driven system that starts with a fact in the working memory of the decision engine and reacts to changes to that fact. When objects are inserted into working memory, any rule conditions that become true as a result of the change are scheduled for execution by the agenda.

In contrast, a backward-chaining rule system is a goal-driven system that starts with a conclusion that the decision engine attempts to satisfy, often using recursion. If the system cannot reach the conclusion or goal, it searches for subgoals, which are conclusions that complete part of the current goal. The system continues this process until either the initial conclusion is satisfied or all subgoals are satisfied.

The following diagram illustrates how the decision engine evaluates rules using forward chaining overall with a backward-chaining segment in the logic flow: 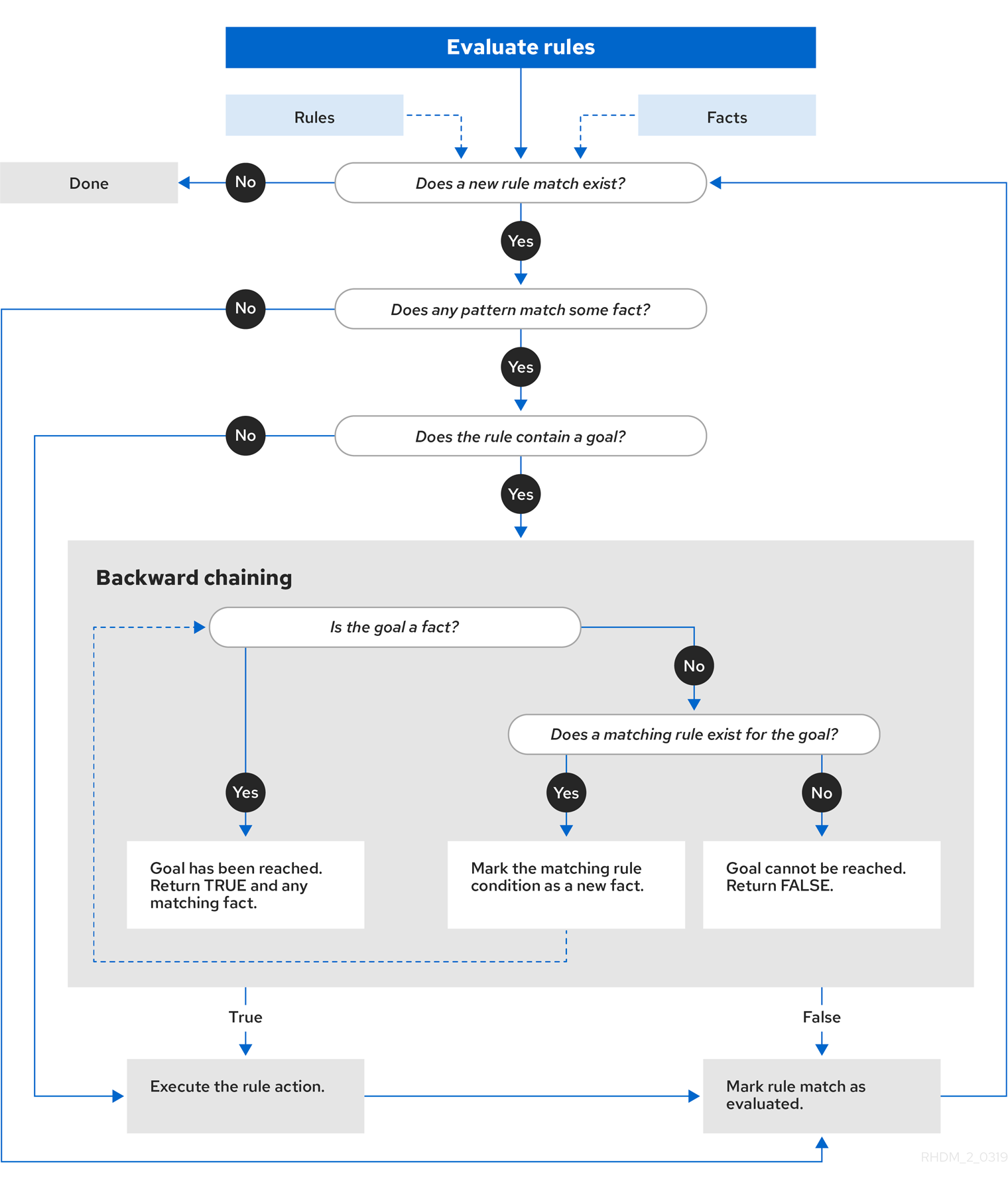 Red Hat Process Automation Manager contains a RuleBaseConfiguration.java object that you can use to configure exception handler settings, multithreaded execution, and sequential mode in the decision engine.

The following rule base configuration options are available for the decision engine:

When configured, this system property defines the class that manages the exceptions thrown by rule consequences. You can use this property to specify a custom exception handler for rule evaluation in the decision engine.

You can specify the custom exception handler using one of the following options:

When enabled, this system property enables the decision engine to evaluate rules in parallel by dividing the Phreak rule network into independent partitions. You can use this property to increase the speed of rule evaluation for specific rule bases.

You can enable multithreaded evaluation using one of the following options:

Rules that use queries, salience, or agenda groups are currently not supported by the parallel decision engine. If these rule elements are present in the KIE base, the compiler emits a warning and automatically switches back to single-threaded evaluation. However, in some cases, the decision engine might not detect the unsupported rule elements and rules might be evaluated incorrectly. For example, the decision engine might not detect when rules rely on implicit salience given by rule ordering inside the DRL file, resulting in incorrect evaluation due to the unsupported salience attribute.

You can enable sequential mode using one of the following options:

To enable sequential mode, use one of the following options:

To configure sequential mode to use a dynamic agenda, use one of the following options:

When you enable sequential mode, the decision engine evaluates rules in the following way:

In sequential mode, the LeftInputAdapterNode node creates a Command object and adds it to a list in the working memory of the decision engine. This Command object contains references to the LeftInputAdapterNode node and the propagated object. These references stop any left-input propagations at insertion time so that the right-input propagation never needs to attempt to join the left inputs. The references also avoid the need for the left-input memory.

The agenda with a priority queue to schedule the tuples is replaced by an element for each rule. The sequence number of the RuleTerminalNode node indicates the element where to place the match. After all Command objects have finished, the elements are checked and existing matches are executed. To improve performance, the first and the last populated cell in the elements are retained.

When the network is constructed, each RuleTerminalNode node receives a sequence number based on its salience number and the order in which it was added to the network.