Chapter 81. Inference and truth maintenance in the decision engine

The basic function of the decision engine is to match data to business rules and determine whether and how to execute rules. To ensure that relevant data is applied to the appropriate rules, the decision engine makes inferences based on existing knowledge and performs the actions based on the inferred information.

For example, the following DRL rule determines the age requirements for adults, such as in a bus pass policy:

Based on this rule, the decision engine infers whether a person is an adult or a child and performs the specified action (the then consequence). Every person who is 18 years old or older has an instance of IsAdult inserted for them in the working memory. This inferred relation of age and bus pass can then be invoked in any rule, such as in the following rule segment:

In many cases, new data in a rule system is the result of other rule executions, and this new data can affect the execution of other rules. If the decision engine asserts data as a result of executing a rule, the decision engine uses truth maintenance to justify the assertion and enforce truthfulness when applying inferred information to other rules. Truth maintenance also helps to identify inconsistencies and to handle contradictions. For example, if two rules are executed and result in a contradictory action, the decision engine chooses the action based on assumptions from previously calculated conclusions.

For example, the following sample DRL rules use stated fact insertion to determine the age requirements for issuing a child bus pass or an adult bus pass:

These rules are not easily maintained in the decision engine as bus riders increase in age and move from child to adult bus pass. As an alternative, these rules can be separated into rules for bus rider age and rules for bus pass type using logical fact insertion. The logical insertion of the fact makes the fact dependent on the truth of the when clause.

The following DRL rules use logical insertion to determine the age requirements for children and adults:

When the condition in the rule is false, the fact is automatically retracted. This behavior is helpful in this example because the two rules are mutually exclusive. In this example, if the person is younger than 18 years old, the rule logically inserts an IsChild fact. After the person is 18 years old or older, the IsChild fact is automatically retracted and the IsAdult fact is inserted.

The following DRL rules then determine whether to issue a child bus pass or an adult bus pass and logically insert the ChildBusPass and AdultBusPass facts. This rule configuration is possible because the truth maintenance system in the decision engine supports chaining of logical insertions for a cascading set of retracts.

When a person turns 18 years old, the IsChild fact and the person’s ChildBusPass fact is retracted. To these set of conditions, you can relate another rule that states that a person must return the child pass after turning 18 years old. When the decision engine automatically retracts the ChildBusPass object, the following rule is executed to send a request to the person:

The following flowcharts illustrate the life cycle of stated and logical insertions: 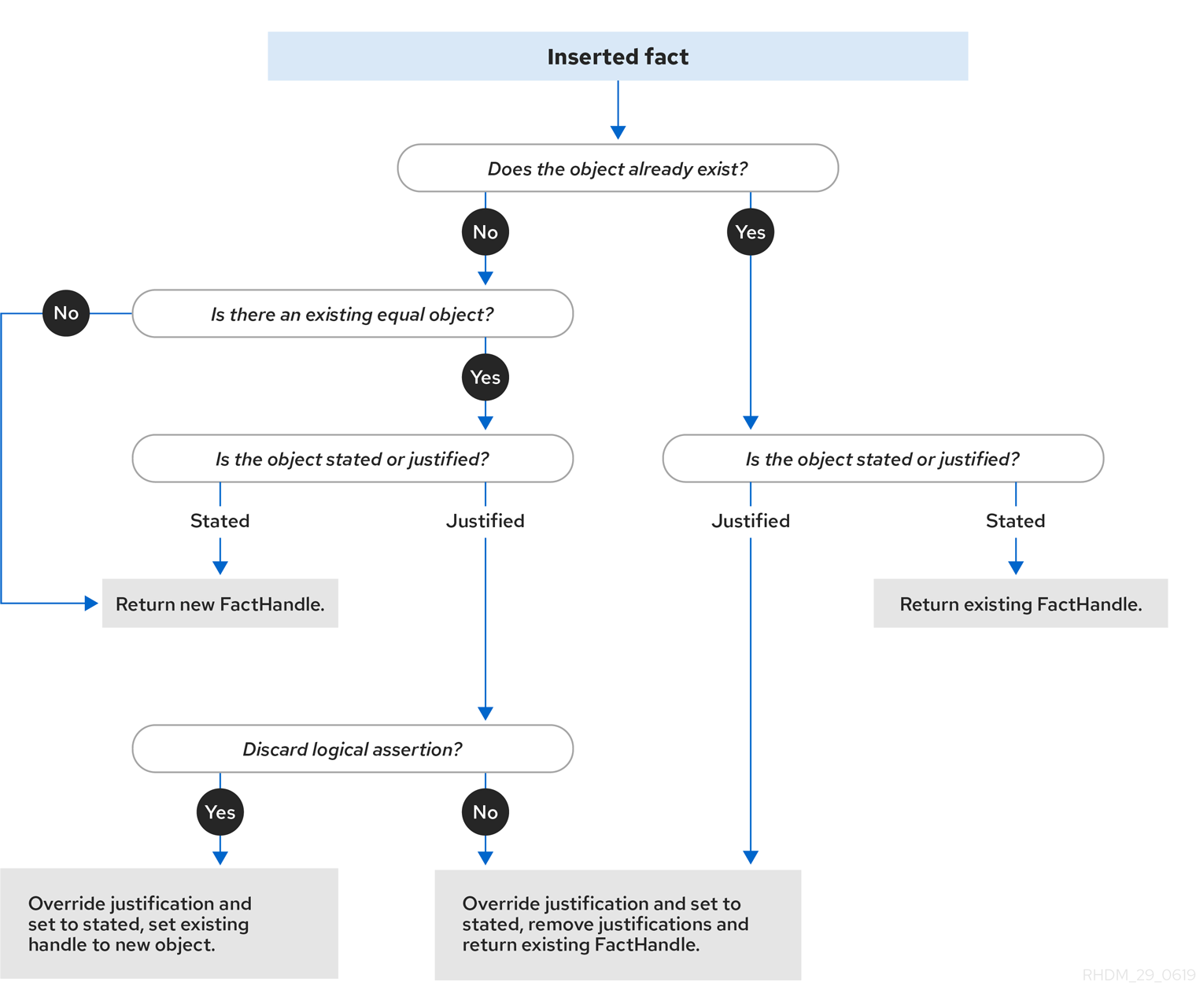 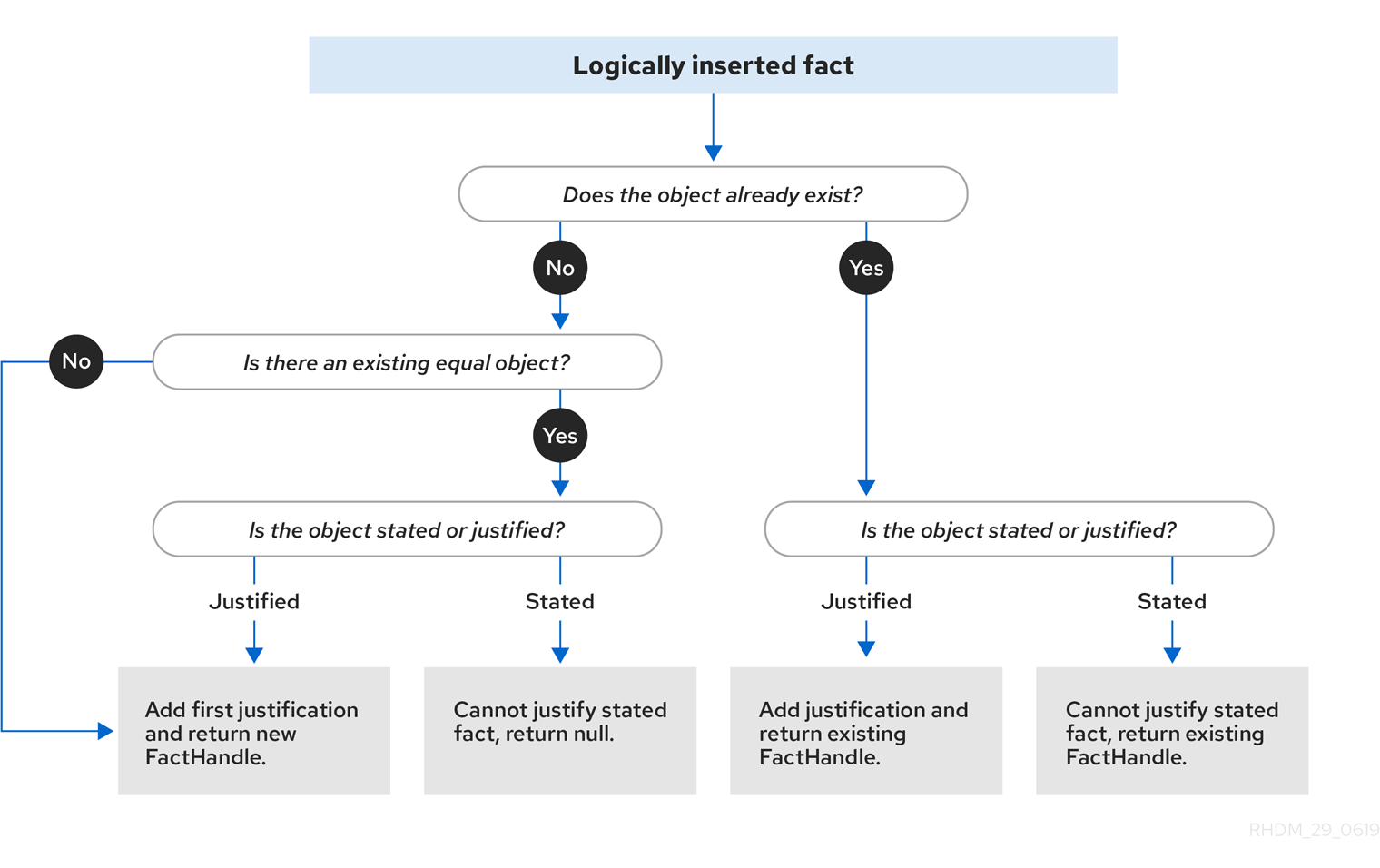 As an illustration of fact equality modes, consider the following example facts:

In identity mode, facts p1 and p2 are different instances of a Person class and are treated as separate objects because they have separate identities. In equality mode, facts p1 and p2 are treated as the same object because they are composed the same way. This difference in behavior affects how you can interact with fact handles.

To set the fact equality mode, use one of the following options: