Distributed Virtual Routing (DVR) allows you to place L3 Routers directly on Compute nodes. As a result, instance traffic is directed between the Compute nodes (East-West) without first requiring routing through a Network node. In addition, the Floating IP namespace is replicated between all participating Compute nodes, meaning that instances with assigned floating IPs can send traffic externally (North-South) without routing through the network node. Instances without floating IP addresses still route SNAT traffic through the Networking node.

DVR is included as a technology preview in Red Hat OpenStack Platform 8. For more information on the support scope for features marked as technology previews, refer to https://access.redhat.com/support/offerings/techpreview/

In the diagram below, the instances on separate subnets are able to communicate, without routing through the Network node first: 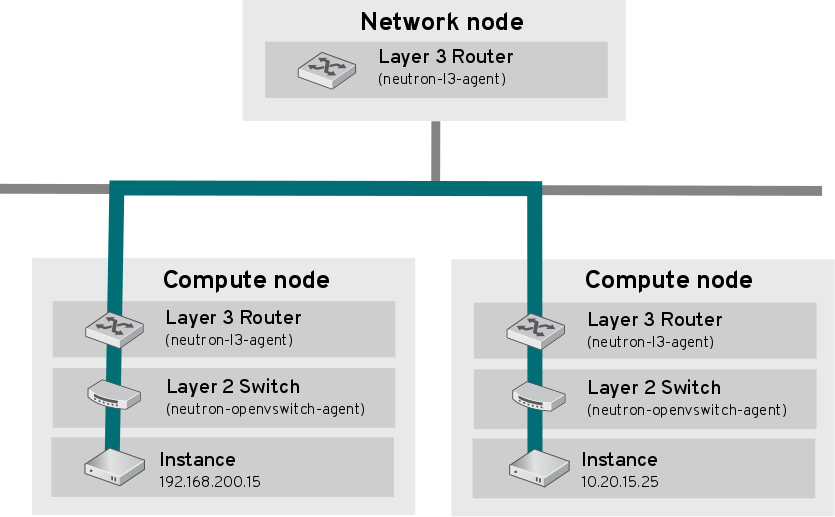 1. On the Network node, enable router_distributed in the neutron.conf file. This setting ensures that all routers created in future are distributed by default.

You can override the default behavior by editing the policy.json file:

On the Compute nodes, enable DVR in the l3_agent.ini file:

On the Network node, configure dvr_snat on the distributed router:

On the Network node and Compute nodes, enable DVR and L2 population on the L2 Agent. For example, if using Open vSwitch, edit the ovs_neutron_plugin.ini file:

On the Controller, edit ml2_conf.ini:

On the Compute nodes, edit ml2_conf.ini:

5. Restart the services for the changes to take effect:

On the Controller, restart the following services:

On the Compute node, restart the following services:

It is not currently possible to convert an existing non-distributed router to DVR. The router should instead be deleted and re-created as DVR.