The Identity service (keystone) provides authentication and authorization for cloud users, and is an important component in security considerations.

The Identity service can directly provide end-user authentication, or can be configured to use external authentication methods to conform to an organization’s security policies and requirements.

Authentication is an integral part of any real world OpenStack deployment. Give careful thought to this aspect of system design. A complete treatment of this topic is beyond the scope of this guide however some key topics are presented in the following sections.

At its most basic, authentication is the process of confirming identity - that a user is actually who they claim to be. A familiar example is providing a username and password when logging in to a system.

The Identity Service (keystone) can limit access to accounts after repeated unsuccessful login attempts. A pattern of repetitive failed login attempts is generally an indicator of brute-force attacks. This type of attack is more prevalent in public cloud deployments. You can also mitigate this by using an external authentication system that blocks out an account after a configured number of failed login attempts. The account then might only be unlocked with further administrative intervention.

Detection techniques can also be used to mitigate damage. Detection involves frequent review of access control logs to identify unauthorized attempts to access accounts. Possible remediation would include reviewing the strength of the user password, or blocking the network source of the attack through firewall rules. You can add firewall rules on the keystone server that restrict the number of connections; this can help reduce the attack’s effectiveness.

In addition, it is useful to examine account activity for unusual login times and suspicious actions, and take corrective actions such as disabling the account.

The Identity service supports the notion of groups and roles. Users belong to groups while a group has a list of roles. OpenStack services reference the roles of the user attempting to access the service. The OpenStack policy enforcer middleware takes into consideration the policy rule associated with each resource then the user’s group/roles and association to determine if access is allowed to the requested resource.

Prior to configuring roles, groups, and users, you should document your required access control policies for the OpenStack installation. The policies should be consistent with any regulatory or legal requirements for the organization. Future modifications to the access control configuration should be done consistently with the formal policies. The policies should include the conditions and processes for creating, deleting, disabling, and enabling accounts, and for assigning privileges to the accounts. Periodically review the policies and ensure that the configuration is in compliance with approved policies.

Cloud administrators must define a user with the role of admin for each service. This service account provides the service with the authorization to authenticate users.

The Compute and Object Storage services can be configured to use the Identity service to store authentication information. The Identity service supports client authentication for TLS, which might be enabled. TLS client authentication provides an additional authentication factor, in addition to the user name and password, that provides greater reliability on user identification. It reduces the risk of unauthorized access when user names and passwords might be compromised. However, there is additional administrative overhead and cost to issue certificates to users that might not be feasible in every deployment.

The cloud administrator should protect sensitive configuration files from unauthorized modification. This can be configured using mandatory access control frameworks such as SELinux, including the /var/lib/config-data/puppet-generated/keystone/etc/keystone/keystone.conf file and X.509 certificates.

Once a user is authenticated, a token is generated for authorization and access to an OpenStack environment. A token can have a variable life span; however the default value for expiry is one hour. The recommended expiry value should be set to a lower value that allows enough time for internal services to complete tasks. In the event that the token expires before tasks complete, the cloud might become unresponsive or stop providing services. An example of expended time during use would be the time needed by the Compute service to transfer a disk image onto the hypervisor for local caching.

The token is often passed within the structure of a larger context of an Identity service response. These responses also provide a catalog of the various OpenStack services. Each service is listed with its name, access endpoints for internal, admin, and public access. The Identity service supports token revocation. This manifests as an API to revoke a token, to list revoked tokens and individual OpenStack services that cache tokens to query for the revoked tokens and remove them from their cache and append the same to their list of cached revoked tokens. Fernet tokens are the only supported tokens in Red Hat OpenStack Platform 16.2.

Fernet tokens are now the default token provider. Fernet is a secure messaging format explicitly designed for use in API tokens. Fernet tokens are non-persistent (no need to be persisted to a database), lightweight (within 180 to 240 bytes) and reduce the operational overhead required to run a cloud. Authentication and authorization metadata is bundled into a message packed payload, which is then encrypted and signed in as a Fernet token (within 180 to 240 bytes).

Keystone domains are high-level security boundaries, logically grouping projects, users and groups. As such, they can be used to centrally manage all keystone-based identity components. With account domains, server, storage and other resources can be logically grouped into multiple projects, which can themselves be grouped into a higher level container. In addition, multiple users can be managed within an account domain and assigned roles that vary for each project.

The Identity V3 API supports multiple domains. Users of different domains might be represented in different authentication backends. They might even have different attributes that must be mapped to a single set of roles and privileges, that are used in the policy definitions to access the various service resources.

Where a rule might specify access to only admin users and users belonging to the project, the mapping might be trivial. In other scenarios the cloud administrator might need to approve the mapping routines per project.

Any domains without a domain-specific configuration file will use options in the primary /var/lib/config-data/puppet-generated/keystone/etc/keystone/keystone.conf file.

You can use an external identity provider (IdP) to authenticate to OpenStack service providers (SP). In this case, the Service Providers are the services provided by an OpenStack cloud.

For authentication and authorization services, the OpenStack identity model considers the external authentication database to be a separate keystone domain. Each external authentication mechanism is associated with a keystone domain, with support for multiple coexisting domains. You can use roles to grant users in external domains access to resources in the cloud; this approach also works in cross-domain multi-project deployments. This approach also has implications for a per-component policy, as not all OpenStack roles can be mapped in policy back to externally authenticated users. For example, there is usually additional configuration and consideration required if users in an external authentication database require administrative access similar to that of the admin user in the admin domain.

External authentication provides a way to use existing credentials to access cloud resources such as servers, volumes, and databases, across multiple endpoints provided in multiple authorized clouds using a single set of credentials, without having to provision additional identities or log in multiple times. The credential is maintained by the user’s Identity Provider.

The Identity service can store user credentials in an SQL Database, or might use an LDAP-compliant directory server. The Identity database might be separate from databases used by other OpenStack services to reduce the risk of a compromise of the stored credentials.

When you use a username and password to authenticate, Identity does not enforce policies on password strength, expiration, or failed authentication attempts. Organizations that desire to enforce stronger password policies should consider using Identity extensions or external authentication services.

LDAP simplifies integration of Identity authentication into an organization’s existing directory service and user account management processes. Authentication and authorization policy in OpenStack might be delegated to another service. A typical use case is an organization that seeks to deploy a private cloud and already has a database of employees and users in an LDAP system. Using this as the authentication authority, requests to the Identity service are delegated to the LDAP system, which will then authorize or deny based on its policies. Upon successful authentication, the Identity service then generates a token that is used for access to authorized services.

Note that if the LDAP system has attributes defined for the user such as admin, finance, HR etc, these must be mapped into roles and groups within Identity for use by the various OpenStack services. The /var/lib/config-data/puppet-generated/keystone/etc/keystone/keystone.conf file maps LDAP attributes to Identity attributes.

In the diagram below, keystone uses an encrypted LDAPS connection to connect to an Active Directory Domain Controller. When a user logs in to horizon, keystone receives the supplied user credentials and passes them to Active Directory for authZ. 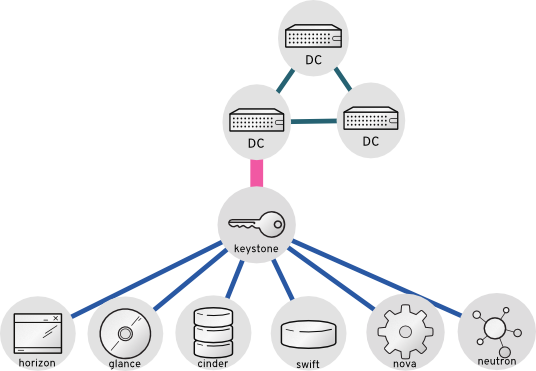 For information on integrating OpenStack with AD DS and IdM, see the integration guide: https://access.redhat.com/documentation/en-us/red_hat_openstack_platform/16.2/html-single/integrate_with_identity_service/