Barbican currently supports the following use cases described in this guide:

The following diagram shows the workflow that OpenStack Key Manager uses to manage secrets for your environment. 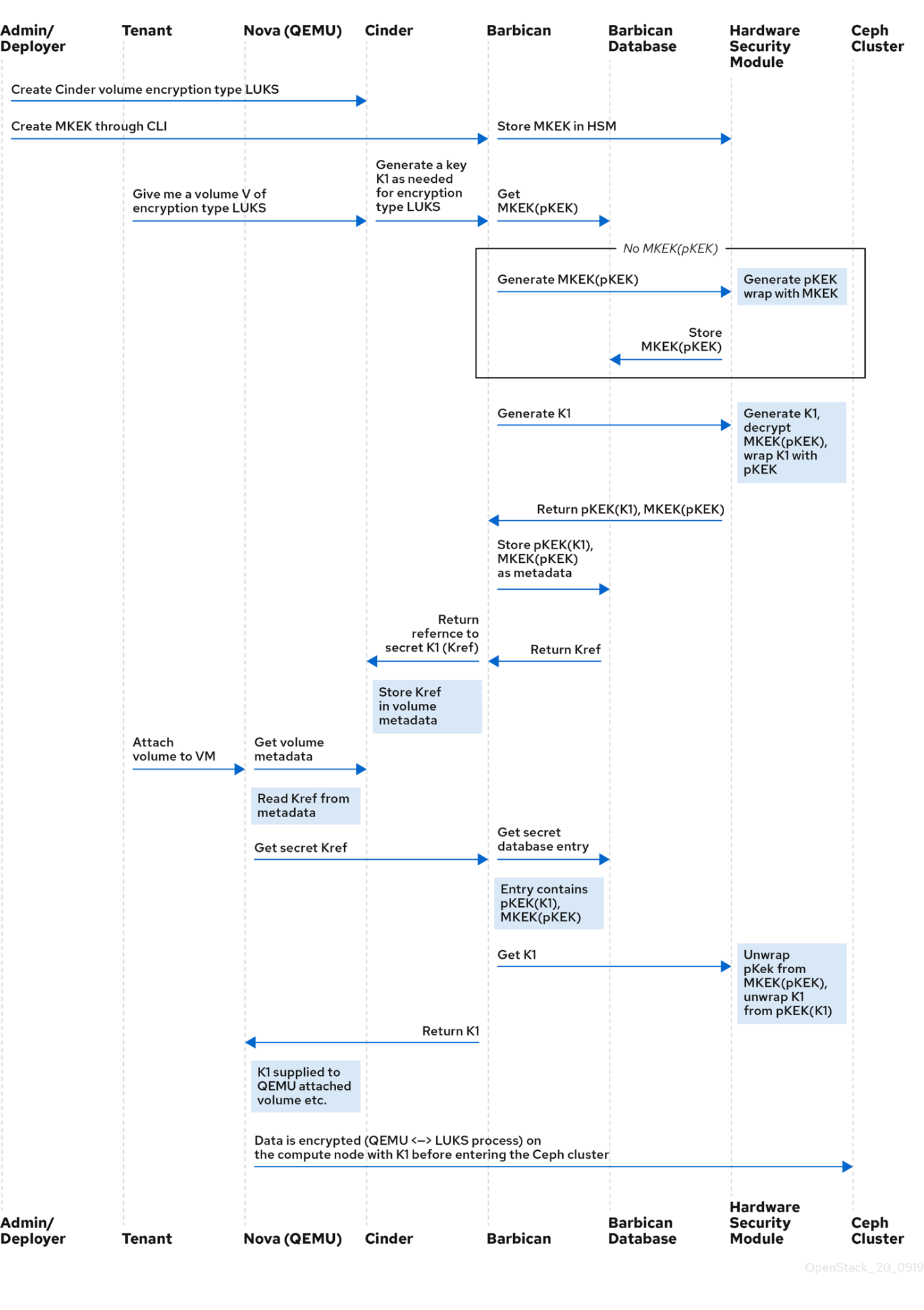 Secrets such as certificates, API keys, and passwords, can be stored in an encrypted blob in the barbican database or directly in a secure storage system. You can use a simple crypto plugin or PKCS#11 crypto plugin to encrypt secrets.

To store the secrets as an encrypted blob in the barbican database, the following options are available:

For example, you can configure Barbican to use both the Simple crypto and PKCS#11 plugins. If you set Simple crypto as the global default, then all projects will use that backend. You can then specify which projects use the PKCS#11 backend by setting PKCS#11 as the preferred backend for that project.

If you decide to migrate to a new backend, you can keep the original available while enabling the new backend as the global default or as a project-specific backend. As a result, the old secrets remain available through the old backend, and new secrets are stored in the new global default backend.

To deploy OpenStack Key Manager, first create an environment file for the barbican service and redeploy the overcloud with additional environment files. You then add users to the creator role to create and edit barbican secrets or to create encrypted volumes that store their secret in barbican.

This procedure configures barbican to use the simple_crypto backend. Additional backends are available, such as PKCS#11 which requires a different configuration, and different heat template files depending on which HSM is used. Other backends such as KMIP, Hashicorp Vault and DogTag are not supported.

Barbican uses policies to determine which users are allowed to perform actions against the secrets, such as adding or deleting keys. To implement these controls, keystone project roles such as creator you created earlier, are mapped to barbican internal permissions. As a result, users assigned to those project roles receive the corresponding barbican permissions.

Review the barbican-policy.yaml file to check the policies used by barbican. The policy is implemented by four different roles that define how a user interacts with secrets and secret metadata. A user receives these permissions by being assigned to a particular role:

For example, the following entries list the admin, observer, and creator keystone roles for each project. On the right, notice that they are assigned the role:admin, role:observer, and role:creator permissions:

These roles can also be grouped together by barbican. For example, rules that specify admin_or_creator can apply to members of either rule:admin or rule:creator.

Further down in the file, there are secret:put and secret:delete actions. To their right, notice which roles have permissions to execute these actions. In the following example, secret:delete means that only admin and creator role members can delete secret entries. In addition, the rule states that users in the admin or creator role for that project can delete a secret in that project. The project match is defined by the secret_project_match rule, which is also defined in the policy.