Chapter 1. The Shared File Systems service with CephFS through NFS

The Shared File Systems service (manila) enables users to create shares in CephFS and access them with NFS 4.1 through NFS-Ganesha. NFS-Ganesha controls access to the shares and exports them to clients through the NFS 4.1 protocol.

The Shared File Systems service manages the life cycle of these shares from within RHOSP. When cloud administrators configure the service to use CephFS through NFS, these file shares come from the CephFS cluster, but are created and accessed as familiar NFS shares.

Compute nodes can host one or more projects. Projects, which were formerly referred to as tenants, are represented in the following graphic by the white boxes. Projects contain user-managed VMs, which are represented by gray boxes with two NICs. To access the ceph and manila daemons projects, connect to the daemons over the public Ceph storage network.

On this network, you can access data on the storage nodes provided by the Ceph Object Storage Daemons (OSDs). Instances, or virtual machines (VMs), that are hosted on the project boot with two NICs: one dedicated to the storage provider network and the second to project-owned routers to the external provider network.

The storage provider network connects the VMs that run on the projects to the public Ceph storage network. The Ceph public network provides back end access to the Ceph object storage nodes, metadata servers (MDS), and Controller nodes.

Using the native driver, CephFS relies on cooperation with the clients and servers to enforce quotas, guarantee project isolation, and for security. CephFS with the native driver works well in an environment with trusted end users on a private cloud. This configuration requires software that is running under user control to cooperate and work correctly. 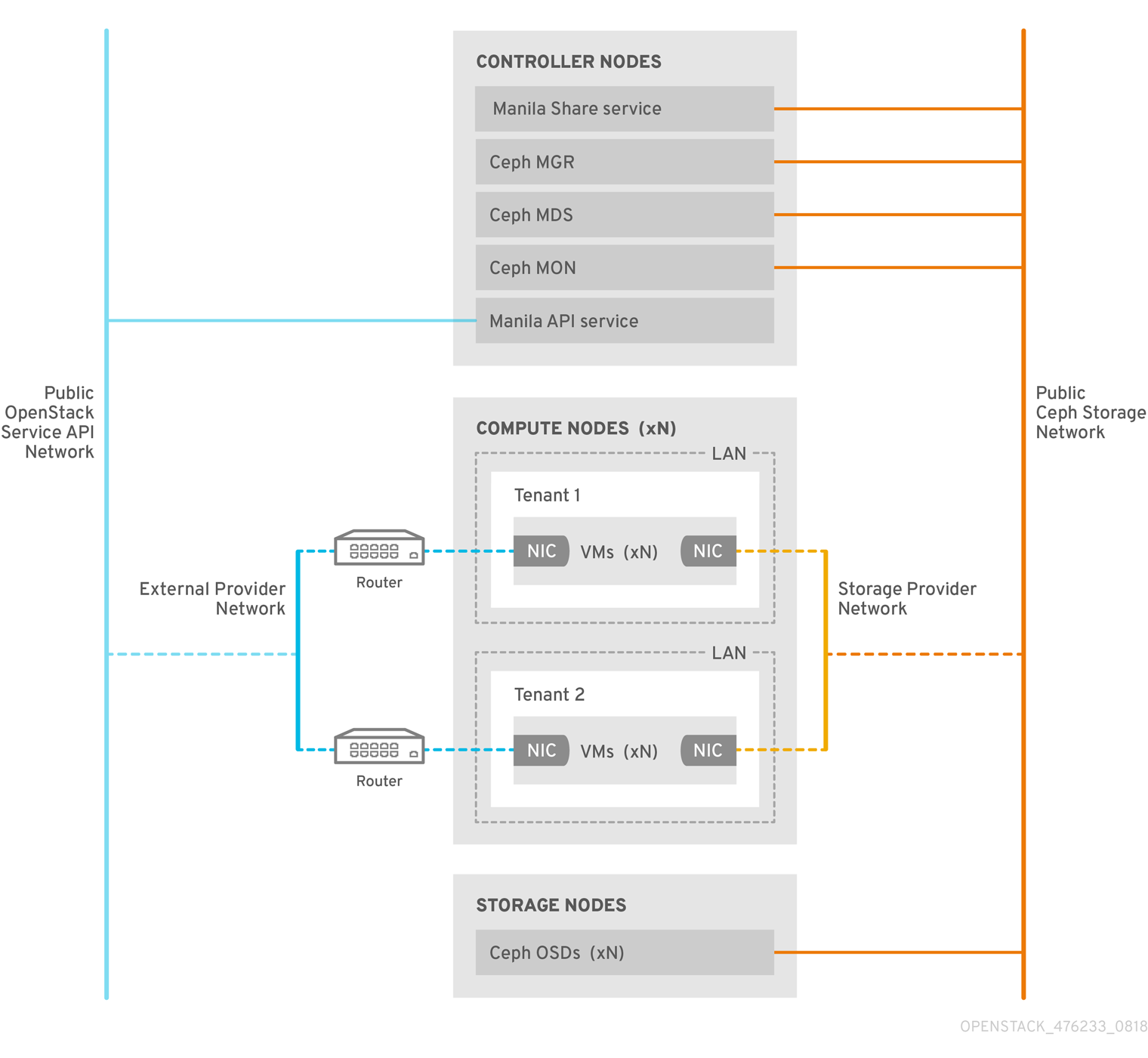 The CephFS through NFS back end in the Shared File Systems service (manila) is composed of Ceph metadata servers (MDS), the CephFS through NFS gateway (NFS-Ganesha), and the Ceph cluster service components. The Shared File Systems service CephFS NFS driver uses NFS-Ganesha gateway to provide NFSv4 protocol access to CephFS shares. The Ceph MDS service maps the directories and file names of the file system to objects that are stored in RADOS clusters. NFS gateways can serve NFS file shares with different storage back ends, such as Ceph. The NFS-Ganesha service runs on the Controller nodes with the Ceph services.

Instances are booted with at least two NICs: one NIC connects to the project router and the second NIC connects to the StorageNFS network, which connects directly to the NFS-Ganesha gateway. The instance mounts shares by using the NFS protocol. CephFS shares that are hosted on Ceph OSD nodes are provided through the NFS gateway.

NFS-Ganesha improves security by preventing user instances from directly accessing the MDS and other Ceph services. Instances do not have direct access to the Ceph daemons. 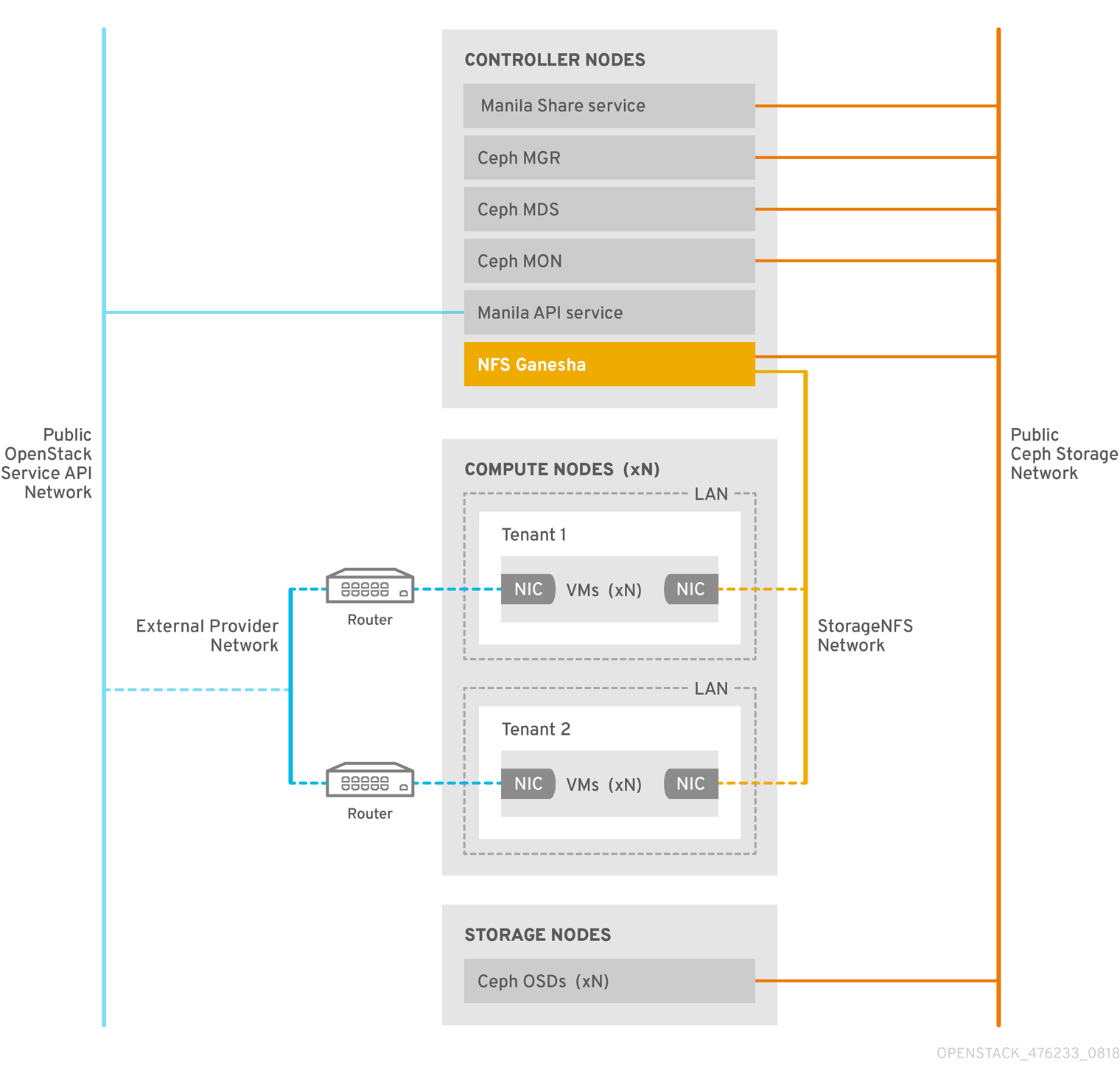 In addition to the monitor, OSD, Rados Gateway (RGW), and manager services deployed when Ceph provides object and block storage, a Ceph metadata service (MDS) is required for CephFS and an NFS-Ganesha service is required as a gateway to native CephFS using the NFS protocol. For user-facing object storage, an RGW service is also deployed. The gateway runs the CephFS client to access the Ceph public network and is under administrative rather than end-user control.

NFS-Ganesha runs in its own container that interfaces both to the Ceph public network and to a new isolated network, StorageNFS. The composable network feature of Red Hat OpenStack Platform (RHOSP) director deploys this network and connects it to the Controller nodes. As the cloud administrator, you can configure the network as a Networking (neutron) provider network.

NFS-Ganesha accesses CephFS over the Ceph public network and binds its NFS service using an address on the StorageNFS network.

To access NFS shares, provision user VMs, Compute (nova) instances, with an additional NIC that connects to the Storage NFS network. Export locations for CephFS shares appear as standard NFS IP:<path> tuples that use the NFS-Ganesha server VIP on the StorageNFS network. The network uses the IP address of the user VM to perform access control on the NFS shares.

When Red Hat OpenStack Platform (RHOSP) director starts the Ceph service daemons, they manage their own high availability (HA) state and, in general, there are multiple instances of these daemons running. By contrast, in this release, only one instance of NFS-Ganesha can serve file shares at a time.

Using default NFS mount-option settings and NFS 4.1 or later, after a failure, TCP connections are reset and clients reconnect. I/O operations temporarily stop responding during failover, but they do not fail. Application I/O also stops responding but resumes after failover completes.

The default value of the grace period is 90 seconds. To change this value, edit the NFSv4 Grace_Period configuration option.