You can use cells to divide Compute nodes in large deployments into groups, each with a message queue and dedicated database that contains instance information.

By default, director installs the overcloud with a single cell for all Compute nodes. This cell contains all the Compute services and databases, and all the instances and instance metadata. For larger deployments, you can deploy the overcloud with multiple cells to accommodate a larger number of Compute nodes. You can add cells to your environment when you install a new overcloud or at any time afterwards.

In multi-cell deployments, each cell runs standalone copies of the cell-specific Compute services and databases, and stores instance metadata only for instances in that cell. Global information and cell mappings are stored in the global Controller cell, which provides security and recovery in case one of the cells fails.

To create a multi-cell overcloud, you must perform the following tasks:

The following components are deployed in a Controller cell once for each overcloud, regardless of the number of Compute cells.

Used by the Compute API and the Compute scheduler services to track location information about instances, and provides a temporary location for instances that are built but not scheduled.

In multi-cell deployments, this database also contains cell mappings that specify the database connection for each cell.

cell0 database
Dedicated database for information about instances that failed to be scheduled.
Super conductor
This service exists only in multi-cell deployments to coordinate between the global services and each Compute cell. This service also sends failed instance information to the cell0 database.

The following components are deployed in each Compute cell.

Cell database
Contains most of the information about instances. Used by the global API, the conductor, and the Compute services.
Conductor
Coordinates database queries and long-running tasks from the global services, and insulates Compute nodes from direct database access.
Message queue
Messaging service used by all services to communicate with each other within the cell and with the global services.

The default overcloud that director installs has a single cell for all Compute nodes. You can scale your overcloud by adding more cells, as illustrated by the following architecture diagrams.

The following diagram shows an example of the basic structure and interaction in a default single-cell overcloud.

In this deployment, all services are configured to use a single conductor to communicate between the Compute API and the Compute nodes, and a single database stores all live instance data.

In smaller deployments this configuration might be sufficient, but if any global API service or database fails, the entire Compute deployment cannot send or receive information, regardless of high availability configurations.

The following diagram shows an example of the basic structure and interaction in a custom multi-cell overcloud. 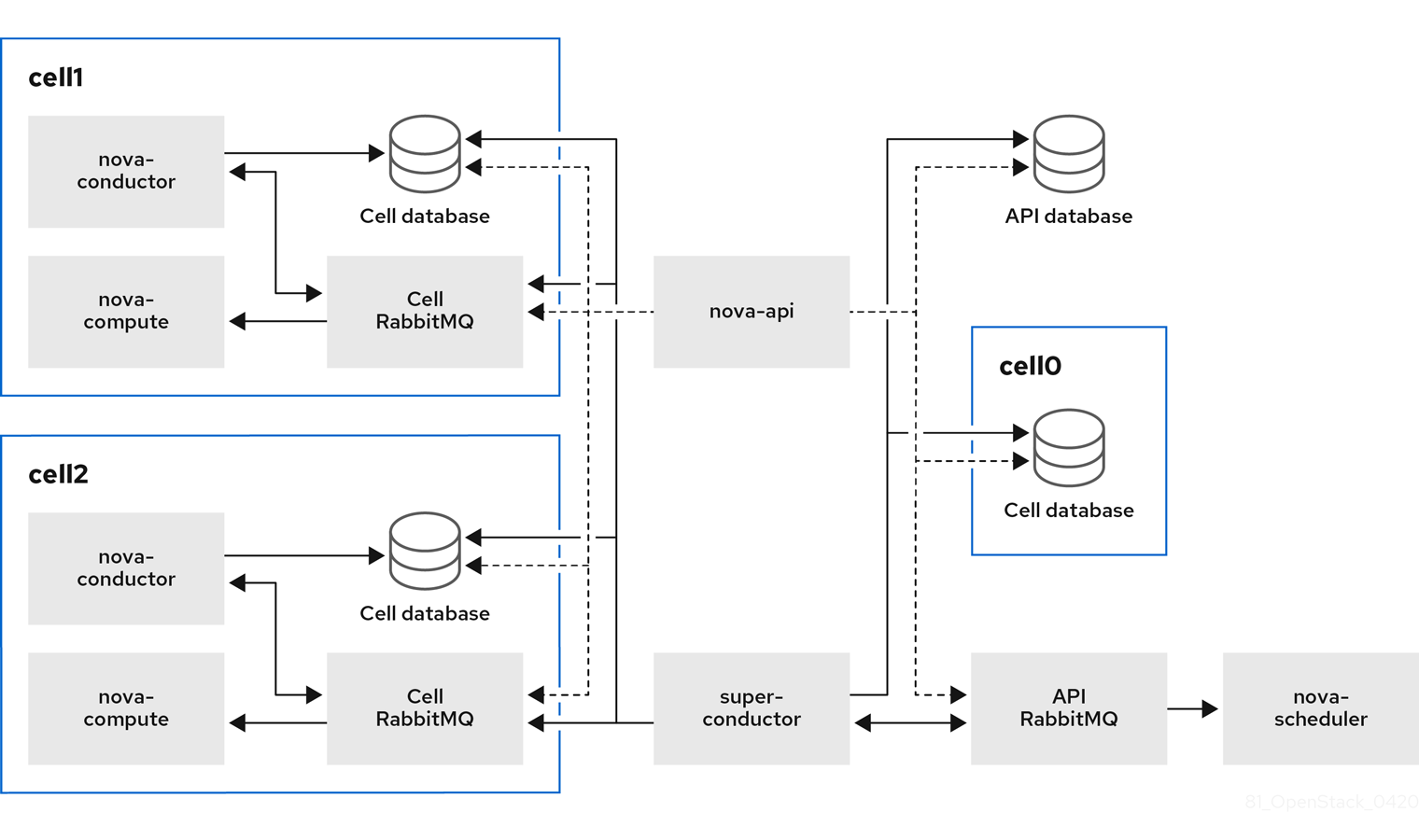 In this deployment, the Compute nodes are divided to multiple cells, each with their own conductor, database, and message queue. The global services use the super conductor to communicate with each cell, and the global database contains only information required for the whole overcloud.

Do not run any Compute services on the first cell, which is named "default". Instead, deploy each new cell containing the Compute nodes separately.

Migrating an instance from a host in one cell to a host in another cell is not supported. This limitation affects the following operations:

Compute service quotas are calculated dynamically at each resource consumption point, instead of statically in the database. In multi-cell deployments, unreachable cells cannot provide usage information in real-time, which might cause the quotas to be exceeded when the cell is reachable again.

You can use the Placement service and API database to configure the quota calculation to withstand failed or unreachable cells.

You use the parameter NovaLocalMetadataPerCell to control where the Compute metadata API runs.