Red Hat OpenStack Platform 12 introduces a technology preview of the OpenDaylight software-defined networking (SDN) controller, integrated into the platform. OpenDaylight is an open, flexible, and modular SDN platform that can be used for various tasks in your Red Hat OpenStack environment.

This feature is available in this release as a Technology Preview, and therefore is not fully supported by Red Hat. It should only be used for testing, and should not be deployed in a production environment. For more information about Technology Preview features, see Scope of Coverage Details.

The OpenDaylight platform is a programmable SDN controller written in Java that can be used for network virtualization for OpenStack environments. The controller architecture consists of separated northbound and southbound interfaces. For OpenStack integration purposes, the main northbound interface uses the NeutronNorthbound project, which communicates with neutron, the OpenStack Networking service. The southbound OpenDaylight projects, the OVSDB and the OpenFlow plug-ins, are used to communicate with the Open vSwitch (OVS) control and the data plane. The main OpenDaylight project that translates the neutron configuration into network virtualization is the NetVirt project.

1.2. How does OpenDaylight work with OpenStack?

By default, Red Hat OpenStack Platform uses the Modular Layer 2 (ML2) core plug-in with the OVS mechanism driver, that provides an agent to configure OVS on each Compute and Controller node. The service plug-ins, the DHCP agent, the metadata agent, along with the L3 agent, run on controllers.

1.2.2. Networking architecture based on OpenDaylight

OpenDaylight integrates with the ML2 core plug-in by providing its own driver called networking-odl. This eliminates the necessity to use the OVS agent on every node. OpenDaylight is able to program each OVS instance across the environment directly, without any agents needed on individual nodes. For Layer 3 services, neutron is configured to use the OpenDaylight L3 plug-in. This approach reduces the number of agents on multiple nodes that handle routing and network address translation (NAT), because OpenDaylight can handle the distributed virtual routing functionality by programming the data plane directly. The neutron DHCP and metadata agents are still used for managing DHCP and metadata (cloud-init) requests.

OpenDaylight is able to provide DHCP services. However, when deploying the current Red Hat OpenStack Platform director architecture, using the neutron DHCP agent provides High Availability (HA) and support for the virtual machine (VM) instance metadata (cloud-init), and therefore Red Hat recommends you deploy the neutron DHCP agent rather than rely on OpenDaylight for such functionality.

1.3. What is Red Hat OpenStack Platform director and how is it designed?

The Red Hat OpenStack Platform director is a toolset for installing and managing a complete OpenStack environment. It is primarily based on the OpenStack TripleO (OpenStack-On-OpenStack) project.

Red Hat OpenStack Platform director introduces the concept of composable services and custom roles. They form isolated resources, that can be included and enabled per role, when they are needed. Custom roles enable users to create their own roles, independent from the default Controller and Compute roles. In other words, users now have the option to choose which OpenStack services they will deploy, and which node will host them.

Two services have been added in order to integrate OpenDaylight with director:

Figure 1.2. OpenDaylight and OpenStack — base architecture 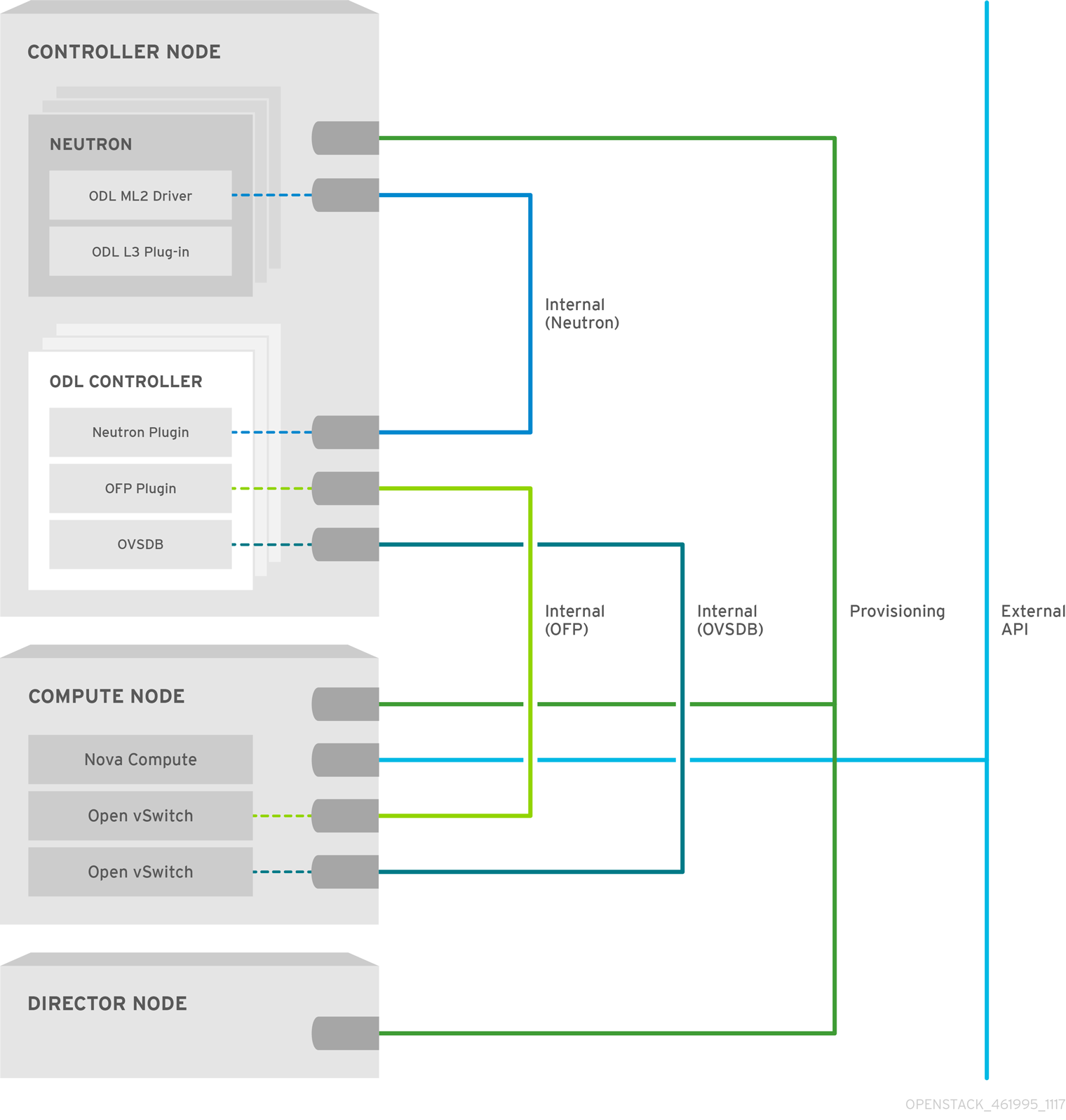 While both Generic Routing Encapsulation (GRE) and Virtual eXtensible Local Area Network (VXLAN) are available in the codebase, VXLAN is the recommended tunneling protocol to use with OpenDaylight. VXLAN is defined in RFC 7348. The rest of this document is focused on VXLAN whenever tunneling is used.

In a typical Red Hat OpenStack Platform installation, the number of network types often exceeds the number of physical network links. In order to connect all the networks to the proper hosts, the overcloud may use the 802.1q VLAN tagging to deliver more than one network per interface. Most of the networks are isolated subnets but some require a Layer 3 gateway to provide routing for Internet access or infrastructure network connectivity.

As OpenDaylight uses a distributed routing architecture, each Compute node should be connected to the Floating IP network. By default, Red Hat OpenStack Platform director assumes that the External network will run on the physical neutron network datacentre, which is mapped to the OVS bridge br-ex. Therefore, you must include the br-ex bridge in the default configuration of the Compute node NIC templates. 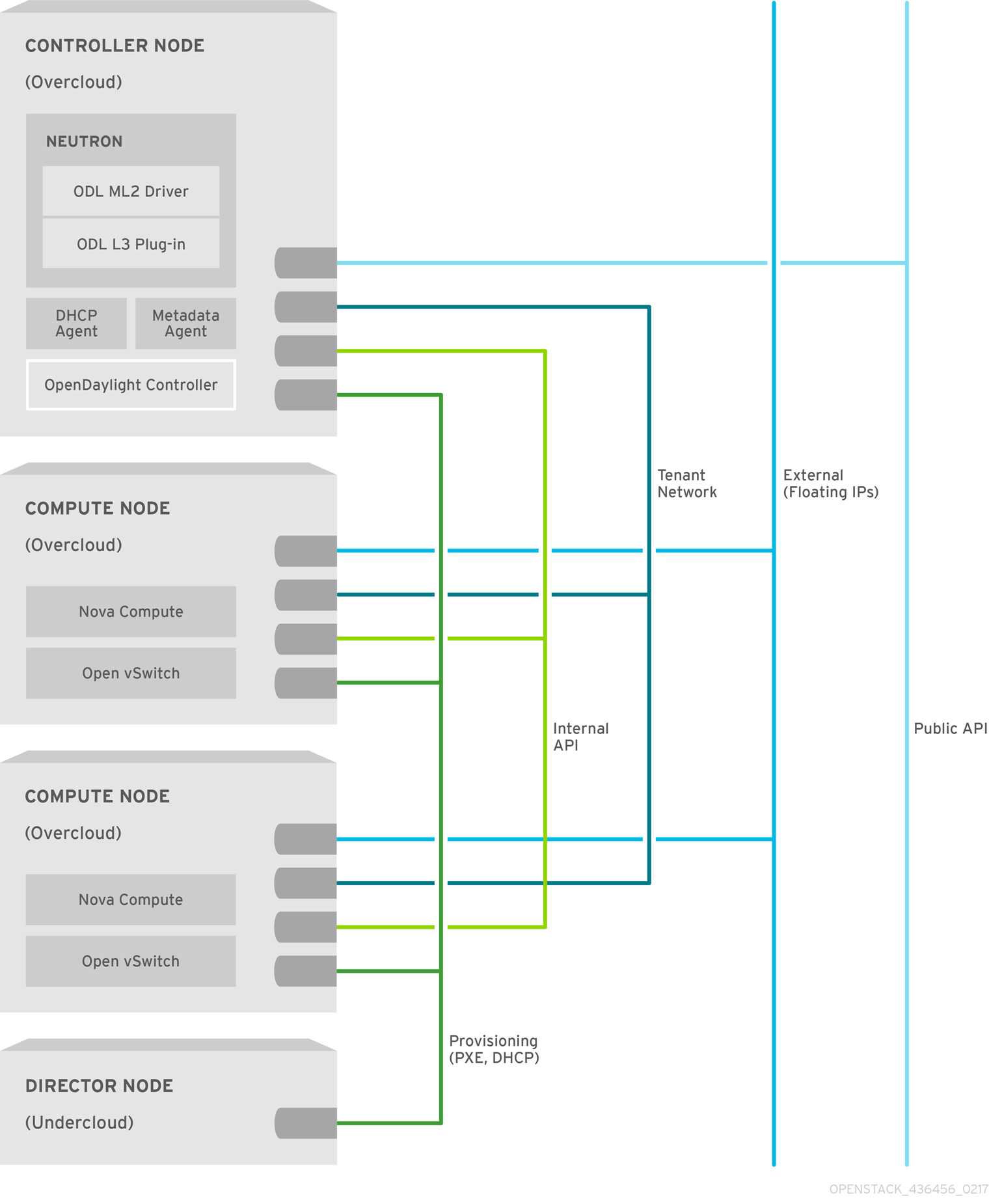 On some deployments, such as those where restrictive firewalls are in place, you might need to configure the firewall manually in order to enable OpenStack and OpenDaylight service traffic.

By default, OpenDaylight Northbound uses the 8080 and 8181 ports. In order not to conflict with the swift service, that also uses the 8080 port, the OpenDaylight ports are set to 8081 and 8181 when installed with Red Hat OpenStack Platform director. The Southbound, in Red Hat OpenDaylight solution, is configured to listen on ports 6640 and 6653, that the OVS instances usually connect to.

In OpenStack, each service typically has its own virtual IP address (VIP) and OpenDaylight behaves the same way. HAProxy is configured to open the 8081 port to the public and control the plane’s VIPs that are already present in OpenStack. The VIP and the port are presented to the ML2 plug-in and neutron sends all communication through it. The OVS instances connect directly to the physical IP of the node where OpenDaylight is running for Southbound.

The above section focuses on the services and protocols relevant to the OpenDaylight integration and is not exhaustive. For a complete list of network ports required for services running on Red Hat OpenStack, see the Firewall Rules for Red Hat OpenStack Platform guide.