OVN is currently available as a Technology Preview feature. For more information on the support scope for features marked as technology previews, see https://access.redhat.com/support/offerings/techpreview/.

For deployments using OVN as the ML2 mechanism driver, only nodes with connectivity to the external networks are eligible to schedule the router gateway ports on them. However, there is currently a known issue that will make all nodes as eligible, which becomes a problem when the Compute nodes do not have external connectivity. As a result, if a router gateway port is scheduled on Compute nodes without external connectivity, ingress and egress connections for the external networks will not work; in which case the router gateway port has to be rescheduled to a controller node. As a workaround, you can provide connectivity on all your compute nodes, or you can consider deleting NeutronBridgeMappings, or set it to datacentre:br-ex. For more information, see https://bugzilla.redhat.com/show_bug.cgi?id=1525520 and https://bugzilla.redhat.com/show_bug.cgi?id=1510879.

10.1. Deploying the OVN base profile

To deploy the base profile, pass the environments/neutron-ml2-ovn.yaml file to openstack overcloud deploy. For example:

To deploy the Pacemaker HA profile, you need to pass the environments/neutron-ml2-ovn-ha.yaml file to the openstack overcloud deploy command. For example: 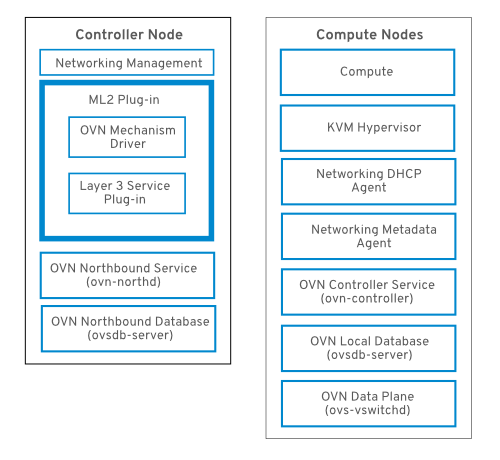 The following packages are required for OVN:

These are subpackages of the main openvswitch package; the minimum version required is OVS 2.7.2. These packages should already be included with the overcloud-full.qcow2 image.

When director is used to deploy OVN, it performs the following steps:

The following director components are used:

To use OVN, your director deployment must use geneve encapsulation, and not VXLAN.

Director has a composable service for OVN named ovn-dbs with two profiles: the base profile, and the pacemaker HA profile. The OVN northbound and southbound databases are hosted by the ovsdb-server service. Similarly, the ovsdb-server process runs alongside ovs-vswitchd to host the OVS database (conf.db).

The YAML file for the base profile is available in tripleo-heat-templates/puppet/services/ovn-dbs.yaml. When this service is enabled, the OVN database servers are started only in the bootstrap controller.

Director creates a virtual IP address for its internal network, being active on one of the controller nodes. This virtual IP is mapped to OVN_DBS_VIP. To enable the OVN ML2 driver and ovn-controller services to connect to the OVN database servers, puppet-tripleo generates the following HAproxy configuration in haproxy.cfg on each controller node:

The OVN ML2 mechanism driver is configured to connect to the OVN_DBS_VIP (in the [ovn] section of ml2_conf.ini).

The YAML file for this profile is located in tripleo-heat-templates/puppet/services/pacemaker/ovn-dbs.yaml. When enabled, the OVN database servers are managed by Pacemaker, and puppet-tripleo creates a pacemaker OCF resource named ovn:ovndb-servers.

OVS version 2.7.2 is required for the Pacemaker HA profile. Failover capabilities are expected to be available in 2.7.4. For more information, see https://bugzilla.redhat.com/show_bug.cgi?id=1512568.

This section describes known issues or other limitations known to exist with the Technology Preview of OVN: