A Management entitlement is required for scheduling scans.

For the Client: Distributing the XCCDF content to client machines

Distributing XCCDF content to client machines can be done through the following methods:

Procedure 6.1. Scans via the Web Interface

To perform a scan through the Satellite Web Interface:
To view the results of the scan, please refer to Section 6.2.3, “How to View SCAP Results”. 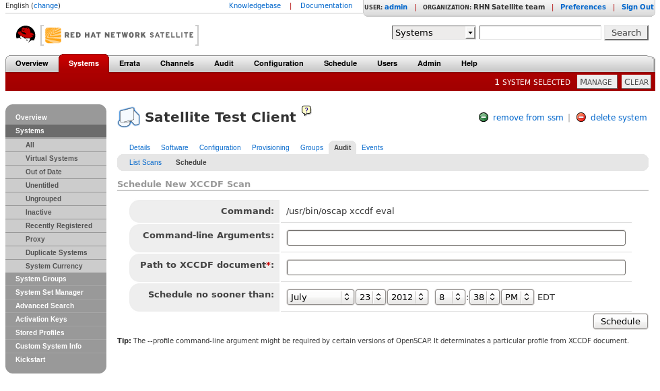 To perform an audit scan via API:

There are three methods of viewing the results of finished scans:

The following sections describe the tabs in the RHN Satellite Web UI that encompasses OpenSCAP.

The Audit tab on the top navigation bar is the encompassing page for the OpenSCAP functionality in RHN Satellite Server 5.5. Clicking on this tab will enable you to view completed OpenSCAP scans, search, and compare them.

Audit → All Scans
All Scans is the default page that appears when the Audit tab is chosen. This page displays all completed OpenSCAP scans which the viewer has permission to see. Permissions for scans derive from system permissions. 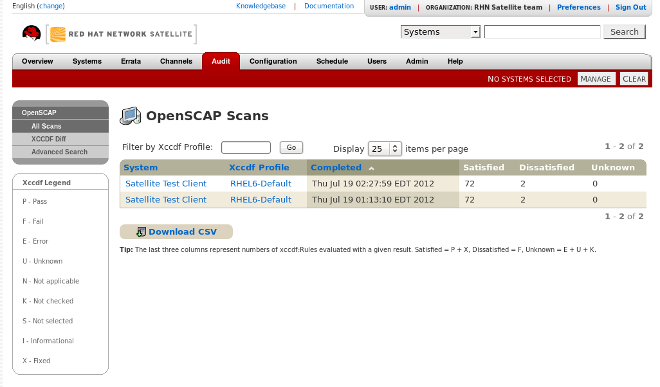 For each scan, the following information is displayed:

The evaluation of XCCDF rules may also return statuses like Informational, Not Applicable, or not Selected. In such cases, the given rule is not included in the statistics on this page. See System Details → Audit for information on those.
Audit → XCCDF Diff
XCCDF Diff is an application which visualizes the comparison of two XCCDF scans. It shows metadata for two scans as well as the lists of results.

You can access the diff of similar scans directly by clicking on icon at the List Scans page or you can diff arbitrary scans by specifying their id.
Items that show up in only one of the compared scans are considered to be "varying". Varying items are always highlighted in beige. There are three possible comparison modes: Full Comparison which shows all the scan items, Only Changed Items which shows items that have changed, and finally Only Invariant Items which shows unchanged or similar items.
Audit → Advanced Search
The Search page allows you to search through your scans according to specified criteria, including: 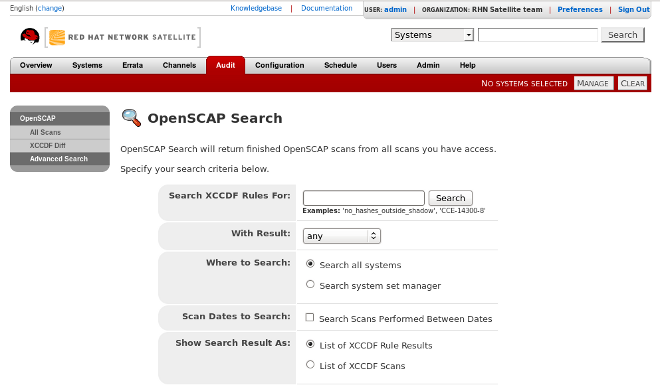 The search either returns a list of results or list of scans which are included in the results.

This tab and its subtabs allow you to schedule and view compliance scans for the system. A scan is performed by the SCAP tool, which implements NIST's standard SCAP (Security Content Automation Protocol). To scan the system, make sure that the SCAP content is prepared and all prerequisites in Section 6.2.1, “Prerequisites” are met. 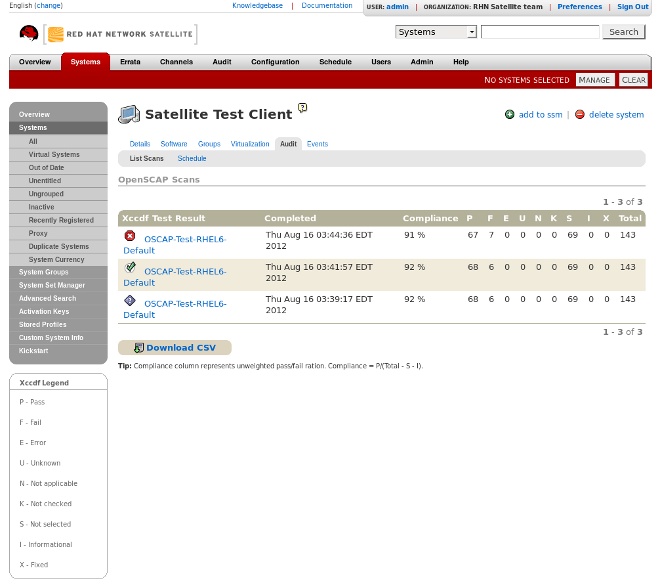 This subtab lists a summary of all scans completed on the system. The columns are as follows:

Each line starts with an icon indicating the results of a comparison to a previous similar scan. The icons indicate that in the newer scan there is either:
Systems → System Details → Audit → Scan Details
This page contains the results of a single scanning. It can be divided into two parts:
Systems → System Details → Audit → Schedule
This subtab is where new scans can be scheduled. Additional command line arguments can be provided, along with the path to the XCCDF document on the system which is being scanned. Based on the "Schedule no sooner than" parameter, the scan will be performed at the system's next scheduled check-in with the Satellite Server. For more information about how to schedule via the Satellite web interface, refer to Procedure 6.1, “Scans via the Web Interface” in this chapter.