One of the core concepts in the Red Hat Mobile Application Platform Hosted (RHMAP) are Cloud Apps — server-side applications which handle communication between Client Apps deployed on mobile devices, and back-end systems which contain business logic and data.

For those not familiar with Node.js development, the Node Beginner Website is an excellent resource.

As the configuration and infrastructure are all in place, the Cloud App can be deployed to an MBaaS and is capable of routing the Client App’s requests without the need of additional code. Should an advanced Node.js developer wish to re-engineer the server or implement their own server, this is possible through the manipulation of the code within the application.js file.

Ensure that the file that represents the main entry point to your App is always called application.js.

The following files are provided by default in a Cloud App:

This file is invoked when your application is deployed to an MBaaS - our cloud execution environment. Typically, you will not need to modify this file and it is by default set to handle fh.cloud() requests from the client and route them accordingly.

Should you need to modify this file, Red Hat recommends that you use fh lib and that you also add routes directly afterapp.use(mbaasExpress.fhmiddleware()); in the application.js file otherwise there is a risk that the cloud section in the analytics panel will not display data. See the following snippet of code taken from from the application.js file for reference:

The configuration file for your Cloud App is primarily used for dependency management. If you are using third-party Node modules, they will be specified in this file.

There are only a few steps to get a Cloud App running. You can explore a simple example by trying the Hello World Project template when creating a new project in the Studio, or by looking at the source code of the template on GitHub: feedhenry-templates/helloworld-cloud. This is a brief overview of the template.

The first step is to configure a custom route in application.js:

In the referenced hello.js file, you would define the logic for that particular route.

For example, a Project could have 3 stages of development: Dev, UAT & Production. Each stage is represented by an Environment. The number and make up of Environments is configurable through the Platform and can be tailored on a per-domain basis.

1.2.2. How Environments interact with Business Objects

Should you access these areas without access to any Environments, you will see a warning similar to the one below:

To perform most actions relating to Projects, Services, Forms and Apps in the App Studio, you will need to be able to access one or more Environments.

If you are currently unable to access any Environments, this could be because:

To gain access to an Environment you (or an Administrator for your Domain) will need to:

If you believe your Team setup and membership is correct, contact your local Administrator for further assistance. Environments need to be set up by an Administrator before access to them can be granted via Teams.

This guide shows you how to include and use Node.js modules in your Cloud Apps. In the Red Hat Mobile Application Platform (RHMAP), you can use the modules of any Node.js package available in the registry to develop your Cloud Apps. In the public registry - npmjs.com - you can find thousands of packages - frameworks, connectors, and various tools. 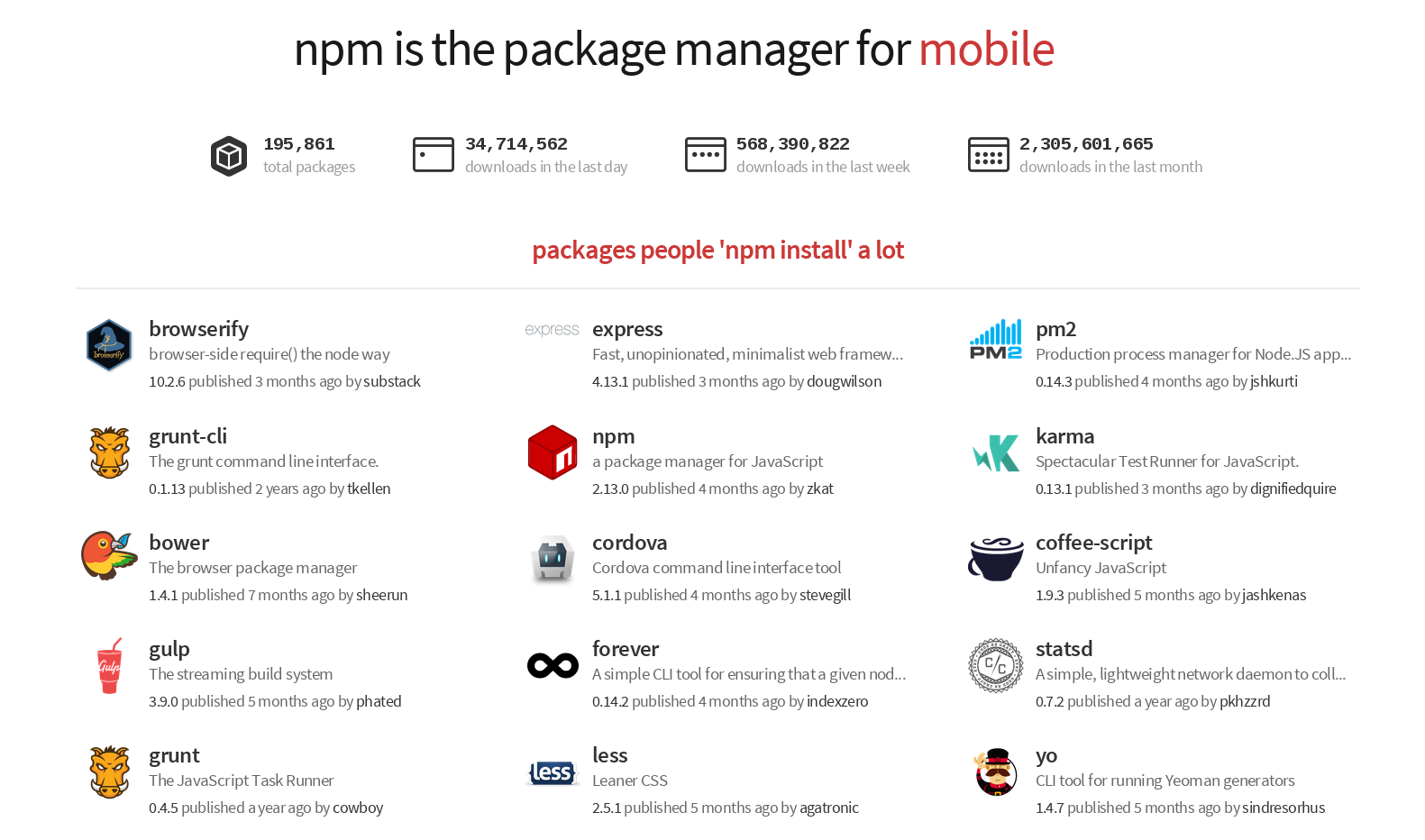 Parts of functionality of RHMAP itself are exposed as node modules. For example, when you create a new Cloud App on the Platform, by default the package.json will include a node module called fh-mbaas-api, which is the cornerstone of the Mobile Backend As A Service (MBaaS) in RHMAP.

1.3.2. Getting Started with Node.js Modules

If you need a piece of functionality in your app and you don’t want to reinvent the wheel, it’s worth searching for existing modules on npmjs.com.

For example, if you want to use the Mongoose ODM framework, you can try looking at the official page of the mongoose package in the registry - npmjs.com/package/mongoose. 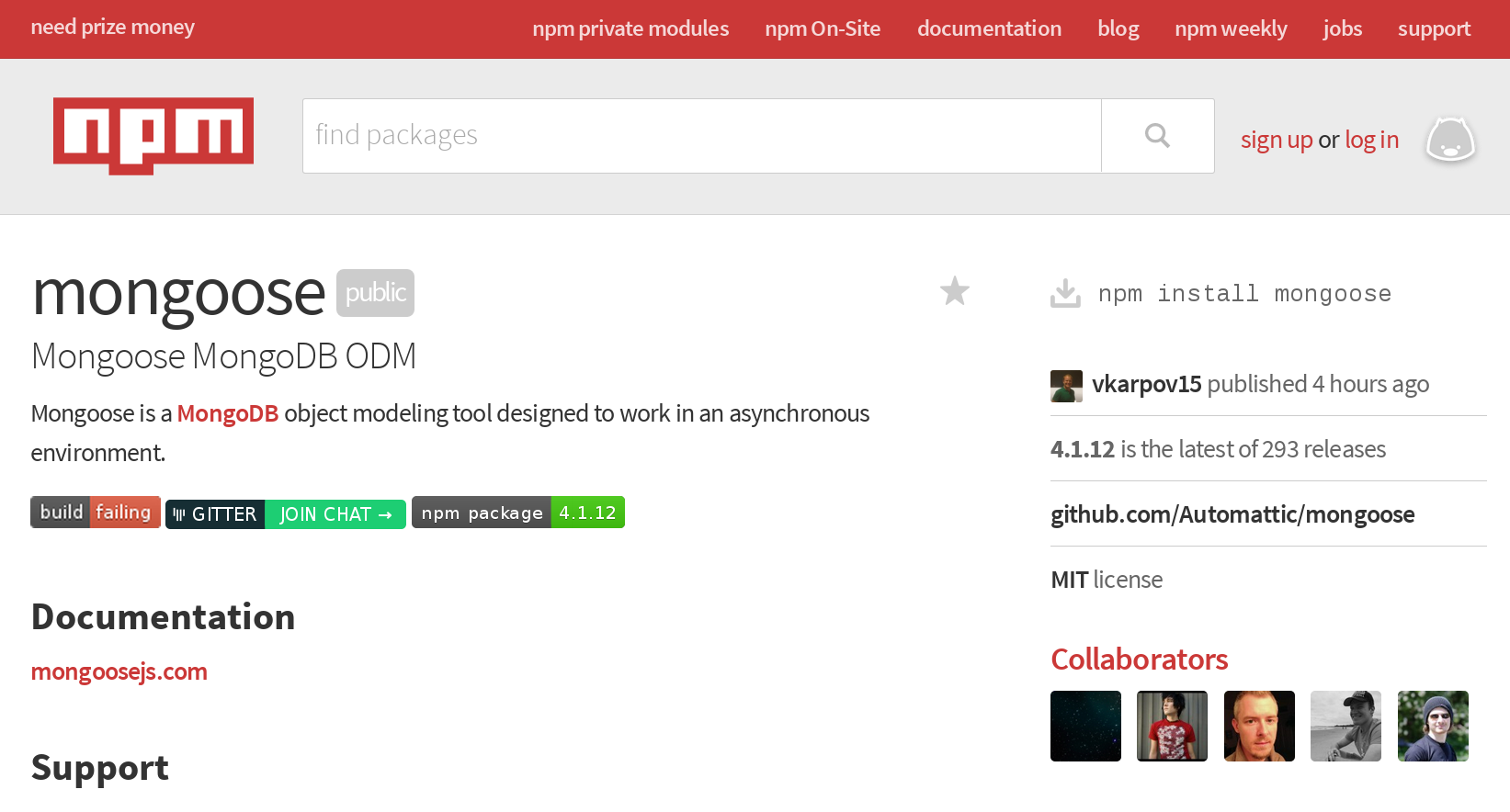 Alternatively, you can add the dependency to package.json manually, by appending it at the end of the dependencies object, as in the following example:

At this point, you can start using the modules provided by the package. Often, the package page on npmjs.com contains instructions for usage and links to documentation. The next step common to all modules is requiring the module in your code to be able to use it:

In this example, the database URL is hard-coded in the source. A more common scenario, however, is using different databases for different stages of development life cycle - development, testing, production. This can be resolved by defining configuration values through environment variables.

If any part of the configuration of your Cloud App - such as hostnames, usernames, or passwords - varies between life cycle stages, you can set such configuration values using environment variables. That allows you to make configuration changes without changing the code. Every Cloud App has an Environment Variables section in the Studio where you can create or remove variables, set values, or push the variables to a running instance of the app.

Environment variables are especially useful in combination with the ability to push different values to different environments. For example, you could be using a different database host for testing and for production. Another benefit is that sensitive configuration information can be stored outside of the code base of your application.

When deploying your Cloud App, the npm command is run in your app’s environment, to download and install the dependencies of your app.

The first time your Cloud App is deployed, the build can take some time as a full npm install is performed.

For each subsequent deployment:

The fundamental best practice with npm is to understand how versioning works with node modules (see The semantic versioner for npm) and to avoid using * for any dependencies in package.json.

A handy tip for developing locally is to use the --save flag when installing a module using npm, for example, npm install request --save. The --save flag will append the new module to the dependencies section in your package.json with the version that has just been installed. We also recommend using a shrinkwrap file.

An npm-shrinkwrap.json file locks down the versions of a package’s transitive dependencies so that you can control exactly which versions of each dependency will be used when your package is installed.

To create a shrinkwrap file, run:

Put the resulting npm-shrinkwrap.json file to the root directory of your Cloud App. When npm install is invoked on your app in RHMAP, it will use exactly the versions defined in the shrinkwrap file.

RHMAP allows you to commit your node_modules directory and to use this in your Cloud App, even though it’s not a recommended practice. That way, npm is not run at all when your app is staged (even if the clean option is specified), and whatever modules you’ve uploaded will be used to run your app. However, native node modules need to be compiled on the same architecture on which they execute, which might vary between instances of RHMAP.

Firstly ensure you have the latest version of fhc.

You can then use the fhc runtimes command to see which runtimes are available to you in an Environment.

This command will output the version, for example, 4.8.4.

On the left is the name of the runtime and on the right is the particular version.

This will set your apps runtime to v4.8.4 of node.

To change it to a different runtime, add the runtime argument to the stage command again

In the Studio from the deploy screen you can see the current runtime the app is set to. You can also set a new runtime here and then deploy your app.