Trait information tends to be static. While traits can, and do, change, they do so infrequently. Also, traits convey descriptive information about a resource, not state data or dynamic measurements, so traits are not critical for IT administrators to track closely.

However, trait information can be valuable in letting administrators know when some configuration or package on the resource has changed because one trait that most resources collect is version information. If a version number changes, then some update has occurred on the underlying resource.

For example, Tim the IT Guy has automatic updates configured for his Red Hat Enterprise Linux development and QA servers. Because his production environment has controlled application and system updates, there are no automatic updates for those servers.

Tim wants to be informed of version changes, but they are not necessarily a big deal. JBoss ON can issue an alert when a trait changes, with the Trait Value Change condition. (Cf. Section 25.1.2, “Basic Procedure for Setting Alerts for a Resource”.) 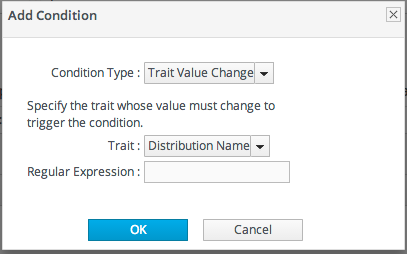 The alert for the development and QA systems is simple:
For Tim's production resources, he sets the alert priority to high and uses an email notification to multiple IT administrators so that they are quickly aware of any change to the production systems.
Report a bug