Integrating LDAP directories introduces another area where users can be created and managed and where the membership of roles can be changed. On the one hand, this can make managing users much easier, especially by allowing existing users to register themselves seamlessly and by automatically updating role membership. However, because users can still be created in JBoss ON and added manually to JBoss ON, user and role management can become messy.
The first problem is simply determining which datastore to use to authenticate users. Even after LDAP authentication is enabled, JBoss ON still checks credentials against its own user store — and it checks its own database first. This means that a user can authenticate to JBoss ON without that request being sent to the LDAP database. All of the security features of the LDAP directory — particularly password policies and account inactivation — are lost because that is not the primary authentication mechanism.
Second, using two resources for user accounts introduces the problem of erroneously mapping JBoss ON and LDAP user accounts, creating duplicate entries, or allowing ghost entries. For example, John Smith is added as a user manually to JBoss ON and also has an LDAP user account. First, he has two duplicate, separately-managed user entries. Then, John Smith goes to a different division, and his LDAP entry is automatically deleted, but his JBoss ON user account remains because JBoss ON user accounts and LDAP user accounts aren't linked. He could still log into JBoss ON. Having duplicate user accounts can introduce other problems if there are accounts with identical names. For example, Jane Smith logs into JBoss ON with her JBoss ON user account (jsmith) and password, but is improperly assigned the JBoss ON role membership of LDAP user John Smith (LDAP UID jsmith) because her JBoss ON user ID was the same as his LDAP user ID, and her account was incorrectly mapped to his LDAP account and, therefore, his LDAP group membership.
Trying to maintain user accounts in both locations also impacts roles, at least in an administrative way. LDAP groups are added as members to the role, and then the group members are listed as user members for the role. However, the list of users assigned to the role does not show where those users came from. This means that the user list can be a mix of LDAP group members and JBoss ON members who were manually added to the list. Ultimately, it becomes difficult to add or remove users because it's not clear where the role users are coming from. Limiting role membership to LDAP groups simplifies maintenance; the roles are automatically updated when users are added or deleted to the groups on the LDAP side and those changes are synchronized over to the JBoss ON role dynamically. 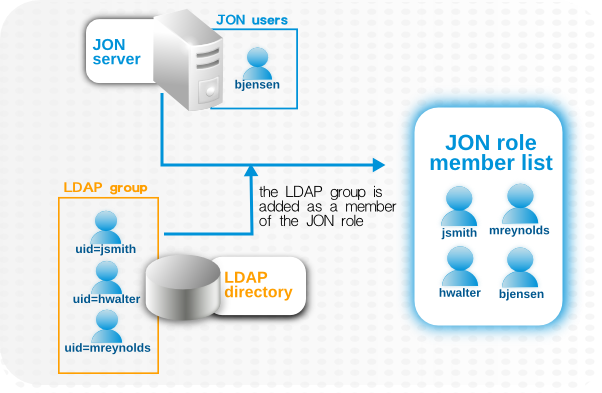 What all of this means is that there are three things to consider when using LDAP services for authentication or authorization:
Report a bug

Authentication is the process of verifying the identity of an entity who attempts to access a server. JBoss ON uses simple authentication, meaning it uses simple username-password pairs to verify identity.
Report a bug