Groups are a simple, yet effective, way to organize resources. Particularly where there are large numbers of resources or where there are logical divisions between resources across departments, IT environments, or physical locations.
Groups in JBoss Operations Network provide a way to manage resources easily and more consistently. Alerts, operations, and configuration can be applied to individual resources or to entire groups of resources, while groups can be monitored from a single view.
Report a bug

Groups are simply a means to organize resources within the JBoss ON inventory. JBoss ON has several different kinds of groups, listed in Table 6.1, “Types of Groups”, which allows an administrator to manage resources in different, flexible ways.

Groups are a way of organizing resources. The different types of groups are covered in , but all of these groups fall into one of two categories. Groups are either static or dynamic, depending on how resources are assigned to the group. Static groups have resources which are explicitly assigned to the group, so the membership does not change even if the inventory changes. Dynamic groups are based on some kind of search criteria, and the group members are all of the resources returned in that search. Whenever the inventory is updated, the search results change, and the group membership is automatically updated.
Both static and dynamic groups can be valuable for managing resources and keeping a perspective on the overall IT environment.
Report a bug

There are two basic types of groups in JBoss ON: static groups, where resources are added manually, and dynamic groups, where resources are added automatically based on some kind of established criteria.
Administrators can configure dynamic groups based on defined searches, which is covered in Chapter 7, Using Dynamic Groups. JBoss ON supports a different kind of dynamic group called an autogroup. Autogroups are used to construct the inventory navigation trees in the JBoss ON UI, and they are based on the underlying resource hierarchy, or parent-child relationships. Autogroups also group along resource type. For example, in Figure 6.1, “PostgreSQL Autogroup”, there are autogroups under the Postgres resource for all its children, which are further divided based on the child resource type, databases and users.

Autogroups, unlike other groups in JBoss ON, are not configurable by JBoss ON users. Autogroups are defined internally in the JBoss ON server and are used by JBoss ON.
Report a bug 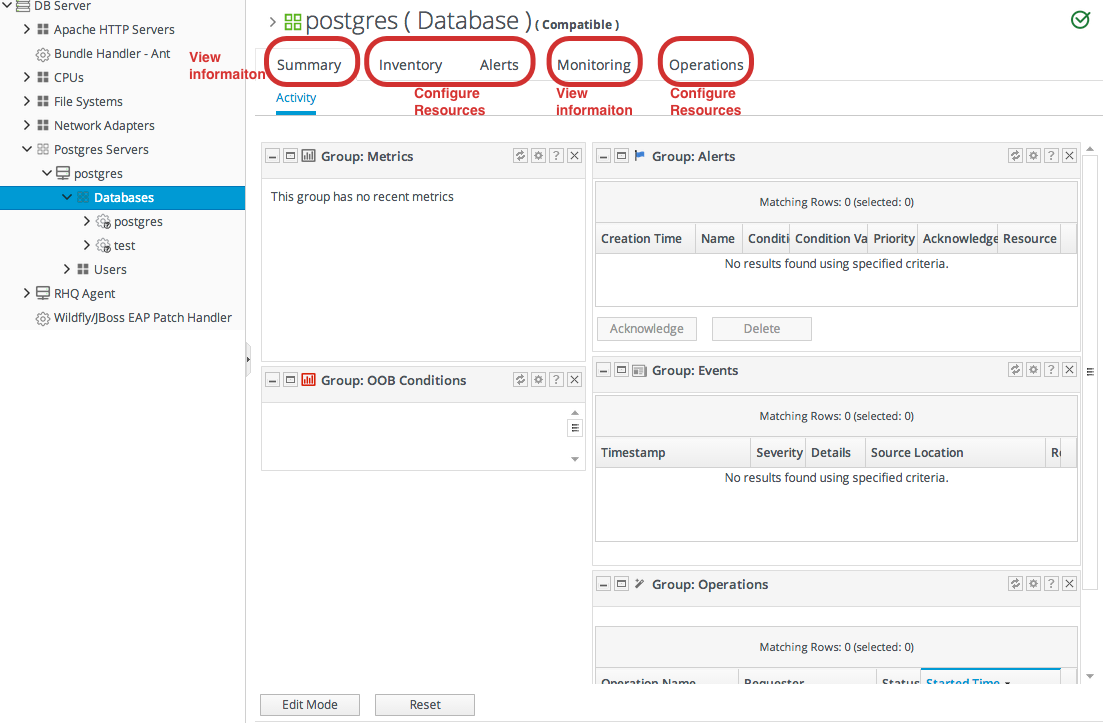 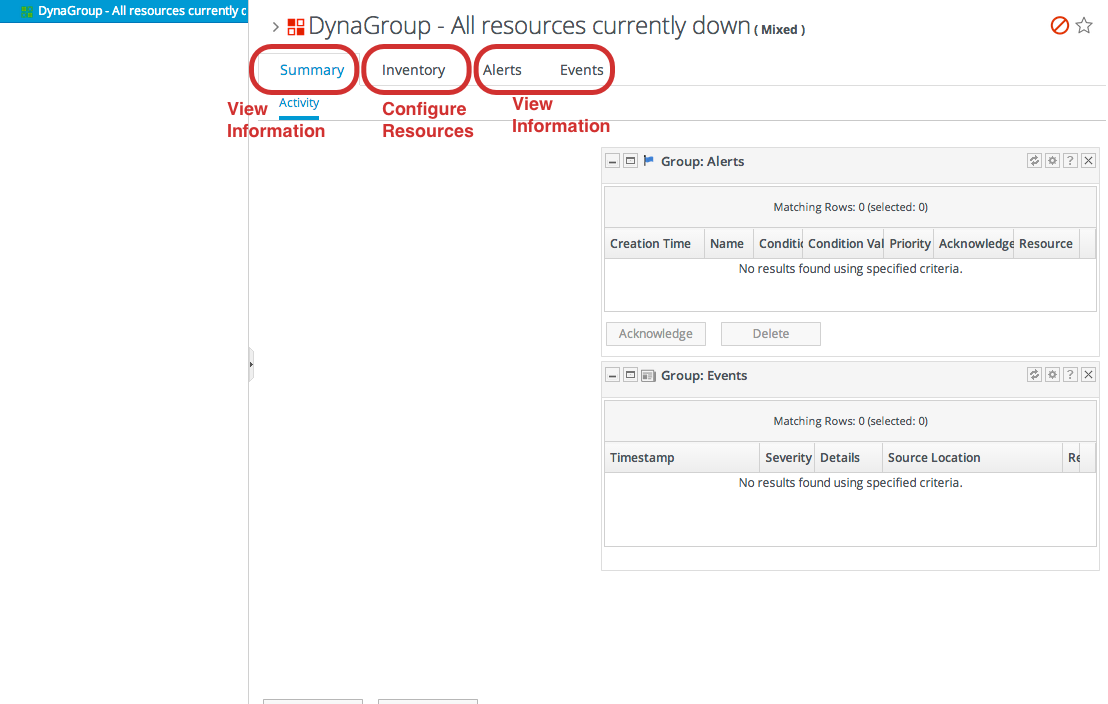 Compatible and mixed groups have a set, explicit membership. This static structure makes them useful for creating policies within JBoss ON because they are reliable.
Compatible and mixed groups can have a setting on them making them recursive. A recursive group travels down the inventory of every member and implicitly adds all of their children to the group, too. In a sense, a recursive group has two tiers of members: the explicit members to the group and then the implicit set of child members.
This idea of two levels of members allows a group to retain its own type definition — meaning specifically that it does not change a compatible group to a mixed group just because its children are added as members. The explicit membership is called the root node. Group operations, from adding members to setting metrics schedules to changing connection settings, are only performed on that root node.
Recursive groups can be useful in a lot of different ways.
For example, recursive compatible groups can be used to look at a subset of autoclusters in the inventory because all of the child resources are grouped by type, as are their parent resources. This provides an easy view at a subset of resources. (Mixed groups, which do not group by type, show only the root node or explicit members in the hierarchy.)
One of the more important uses is using recursive groups, particularly mixed recursive groups, for authorization control. This is covered more in Chapter 9, Managing Roles and Access Control, but users have to be granted access to resources explicitly, by adding the user and the resource to the same role. Using a recursive group automatically includes all of those resources' children in the role, which makes the role easier to maintain and more accurate in granting access.
Report a bug