Figure 10.2. Groups Assigned to a Role 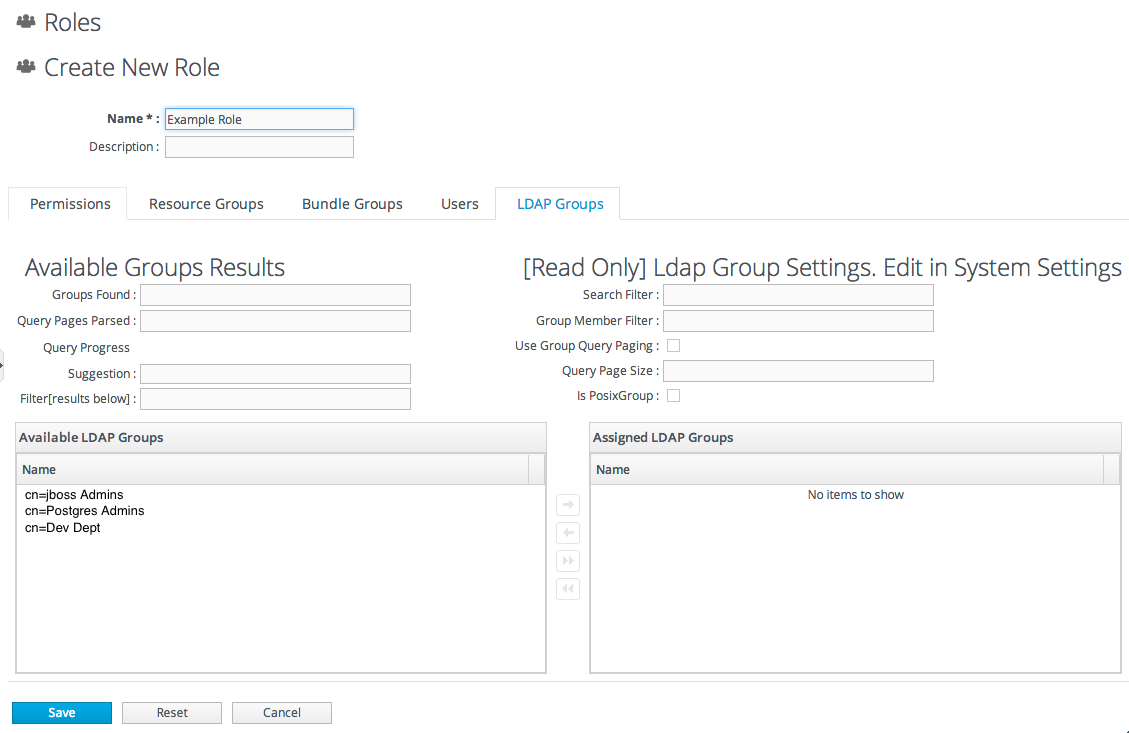 JBoss ON determines what LDAP groups a user belongs to with a simple search. Whenever a user logs into JBoss ON and an LDAP connection is configured, JBoss ON maps that JBoss ON username to a user entry in the LDAP directory server. The specific LDAP distinguished name (DN) for the user is used as part of a search to find matching member attributes in LDAP group entries. That is, the LDAP server can check the member lists in group entries to see what groups the person with that DN belongs to.
For LDAP groups to be added to roles, three things are required:
JBoss ON constructs an LDAP search based on the group object class and member attribute in the server configuration, plus the DN of the user given when the user logs in.
For example, this looks for the member attribute on an Active Directory group:
Red Hat Directory Server uses the uniqueMember attribute on groupOfUniqueNames groups more commonly than member and group. For example:
This search returns a list of all groups to which the user is a member. If any of these LDAP groups is assigned to a JBoss ON role, then that user is also automatically a member of that JBoss ON role.
Note
Using custom LDAP group object classes can allow you to be very specific about which groups to use for JBoss ON roles.
Report a bug

Section 10.2.3, “Configuring LDAP User Authentication” describes how an LDAP directory server can be used to authenticate users to JBoss ON. Any time a user attempts to log in, that request — with the username and password — is simply forwarded to the specified LDAP directory server to see if the credentials are correct.
Members of LDAP groups can be pulled in, automatically, as members of JBoss ON roles. The LDAP group is associated with a JBoss ON role and then the group members are authorized to do whatever the JBoss ON role is configured to allow. Any changes made in the LDAP group members are automatically reflected in JBoss ON, without having to edit the JBoss ON role.
Report a bug