The inventory in JBoss ON is the repository that contains all of the servers and applications that are managed or monitored by JBoss Operations Network. The inventory tells JBoss Operations Network which resources it can manage.
Once in the inventory, resources can be organized in several different ways. Resources can be grouped automatically by their type in autogroups, resources can be added manually to user-defined groups, and they can be added manually to another resource as a child.
This section covers the process of identifying and importing resources through discovery, adding children, and managing groups.
Report a bug

5.1. About the Inventory: Resources

The JBoss ON inventory is the central list of every managed resource that is recognized by the JBoss ON server.
Report a bug

Each JBoss ON agent periodically scans the platform where it's installed to check for services and servers. That is the discovery process. When a potential resource is discovered, then it is listed in the discovery scan results, and, from there, an administrator can choose whether it should be managed by JBoss ON. If a resource should be managed, then it must be imported into the JBoss ON server's inventory; otherwise, it can be ignored.
There are three categories of resources in JBoss ON:
The resource hierarchy in the JBoss ON inventory mimics how programs and processes are physically structured on a platform. The highest level is the platform. The platform can have both servers and services as children. Likewise, servers can have both other servers and services as children, while services can have only other services as children within the inventory. 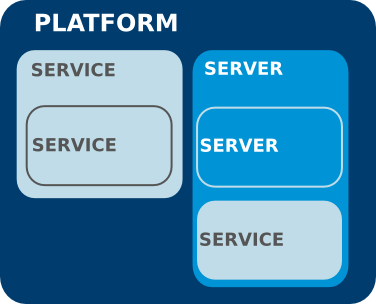 A handful of rules govern the relationships between resources in inventory:
JBoss ON can manage many different types of resources; each managed resource has a corresponding agent plug-in which defines things like the available monitoring metrics, operations, and supported versions for the resource.
Note
Additional resources can be added by writing custom plug-ins for the resource type.
Report a bug

For application servers, there is a close conceptual link between a child resource and content which is deployed on the server. For example, EARs and WARs are both child resources of application servers and are versioned content which can be stored in a repository, selectively deployed, and reverted.
A content-backed resource is treated as a resource in that it has a place in the inventory hierarchy, can have operations run against it, and can have metrics collected for it. However, it is also managed as a software package, with bits that are uploaded and stored in the JBoss ON content system and maintained within a repository.
Content-backed resources can be manually added as children or, if deployed outside JBoss ON, can be detected in a package discovery scan (which runs every 24 hours by default). These child resources can also be created and updated by deploying content from the repositories in JBoss ON.
For more information on managing content-backed resources, see Chapter 32, Managing JBoss EAP 6 (AS 7) and Chapter 31, Managing JBoss EAP 5.
Important
Content-backed resources can have a significant impact on disk space requirements.
JBoss ON stores all versions of content. This is part of versioning control, allowing changes to content-backed resources to be reverted and managed.
Therefore, the system which hosts the backend database (Oracle or PostgreSQL) must have enough disk space to store all versions of all content for any resource. Additionally, the database itself must have adequate tablespace for the content.
When calculating the required amount of space, estimate the size of every artifact, and then the number of versions for each artifact. At a minimum, have twice that amount of space available; both PostgreSQL and Oracle require twice the database size to perform cleanup operations like vacuum, compression, and backup and recovery.
Report a bug

5.1.3. Resources in the Inventory Used by JBoss ON

Some resources are automatically added to platforms to enable certain JBoss ON-specific functionality. For example, an Ant bundle handler resource is added to platforms as a child service to allow the agent to identify and process Ant recipes. [1] Without that Ant bundle handler resource, the JBoss ON agent cannot perform provisioning on that platform. Administrators do not have to interact directly with JBoss ON-specific child resources once they are in the inventory, but these child resources must be present for JBoss ON functionality to work. Because these children are required by JBoss ON, they are imported automatically with the platform.
Other resources can be added to the inventory for the JBoss AS server used by the JBoss ON server, the JBoss ON agent, and JBoss elements associated with the agent and server such as the agent JVM, JBoss Cache, and the agent launch script and rhq-agent-env.sh script. Adding these resources to the JBoss ON inventory allows JBoss ON to monitor and manage all of the agents and servers in the deployment.
Report a bug
[1] Provisioning Ant bundles is implemented through an agent plug-in which performs the tasks on the platform and a server-side plug-in which manages the bundles in the server.