Monitoring (Chapter 19, Metrics and Measurements) is closely associated to alerting, in a larger work flow of keeping administrators aware of what is happening in their network. Alerting is based on conditions, the signal that an alert should be issued.
Conditions can be pretty straightforward — if A happens, do B — or they can be complex, with multiple conditions or combinations of readings required before an alert is initiated.
Report a bug

The condition is any situation, event, or level on a resource that crosses a certain threshold. Basically, a condition sets parameters on what is "normal" behavior or performance for a resource. Once it crosses that boundary, JBoss ON issues an alert. This can be a metric value that has changed to an undesirable level, an event, or a recurring metric reading.
Alerts through alert definitions against are defined for individual resources or for compatible groups of resources. An alert definition specifies the conditions that trigger the alert and the type and settings of any notification that should be triggered.
When an alert is registered, the alert identifies the alert definition which was triggered (which identifies the alert condition) and the metric or event value which precipitated the alert.
An alert conditions answers four questions: what, when, who, and where. The what is the threshold or condition that triggers the alert (such as the free memory drops below a certain point). The when sets the frequency or timing for sending an alert using a defined dampening rule. And the who and where controls how administrators are notified of the alert.
A single condition can be enough to issue an alert, or an alert definition can require that an alert is issued only if multiple conditions are met simultaneously. This provides very granular control over when an alert is issued, which makes alerting information more valuable and relevant.
A condition can be based on any detectable monitoring or system metric, listed in Section 25.2.1, “Reasons for Firing an Alert”. These alert conditions correspond directly to the monitoring metrics available for that type of resource. All of the possible metrics for each resource type are listed in the Resource Monitoring Reference.

25.2.2. Detailed Discussion: Ranges, AND, and OR Operators with Conditions

Alerting is based on monitoring information. It is an extension that allows an administrator to receive a notification or define an action to take if a certain event or metrics value occurs.
The monitoring point that triggers an alert is the alert condition. At its most simplistic, an alert condition is a single event or reading. If X occurs, then that triggers an alert.
In real life, X may not be enough to warrant an alert or to adequately describe the state of a resource. Different conditions may require the same response or a situation may only be critical if multiple conditions are true. Alerting is very flexible because it allows multiple conditions to be defined with established relationships between those conditions.
The next level of complexity is to send an alert if either X or Y is true. In the alert definition, this is the ANY option, which is a logical OR. The alert definition checks for any of those conditions, but those conditions are still unrelated to each other.
The last level of complexity is when the conditions have to relate to each other for an alert to be issued. This is the ALL option, which is a logical AND. Both X and Y must occur for the alert to be issued. In this case, when one condition occurs, the server puts a lock on that definition and begins waiting for the second condition to occur. When the second condition occurs, then the alert is issued.
An AND operator is very effective on different metrics, but because the conditions do not have to occur simultaneously, using a simple AND operator does not make sense for the same metric.
For example, Tim the IT Guy only wants an alert to be issued when the user load is between 40% to 60%, indicating slightly increased loads on his platform. Attempting to use an AND operator returns strange values when the load spikes over 70% (which trips the above 40% condition) and then falls back to 15% (which triggers the below 60% condition).
In this case, Tim uses a range condition. A range requires two values from the same metric that are within the given boundaries. A range can be inside values (40-60%) or it can be an outside range (below 40% and above 60%). 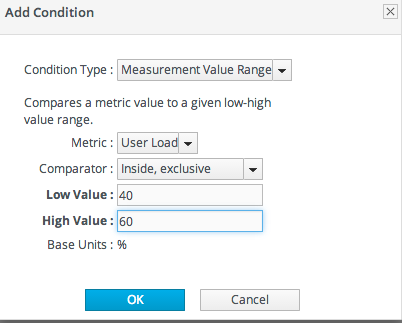 Events (Chapter 20, Events) are filtered log messages. Certain resource in JBoss ON maintain their own error logs, like platforms and JBoss EAP servers. JBoss ON can scan these error logs to detect events of certain severity or events matching certain patterns. This allows JBoss ON administrators to provide an easy way to identify and view important error messages.
Because JBoss ON can detect log events, JBoss ON can alert on log events. An event-based condition requires the severity of the log file message and, optionally, a pattern to use to match specific messages. 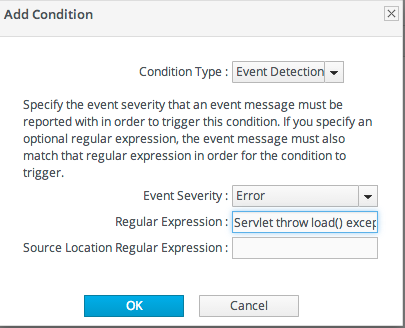 Setting only a severity alerts on any event with that severity. That is useful for severe or fatal errors, which are relatively infrequent and need immediate attention.
Note
For general error message, use a pattern to filter for a specific error type. Then, use a resource operation or CLI script to take a specific action to address that specific error, like restarting a resource or starting a new web app.
Report a bug

For example, Tim the IT Guy sets an alert to let him know if his platform CPU usage spikes above 80%. Every time the monitoring scan runs, the metric is again determined to be true, and is treated as a new and discrete instance. If the metric schedule is set for 10 minutes and it takes him an hour to respond to the alert, he could have six or seven alert notifications before he has a chance to respond. If the only alert response is an email, this is an annoyance, but not a problem.
If, however, Tim the IT Guy has an alert response to create a new JBoss server if his EAP connection count goes above a certain point, the same response could be taken six or seven times, when it actually should be done once and then the condition will naturally resolve itself.
Dampening is another set of instructions on how to evaluate the condition before triggering another alert. It tells JBoss ON how to interpret those monitoring data.
Note
Dampening is only relevant for metrics which are variable and compared to some kind of baseline. Monitoring metrics with thresholds and value changes are dynamic, so each reading really is a new condition, even if it matches the previous reading. Dampening, then, controls those multiple similar readings.
Conditions which relate directly to a status change do not compare themselves against a baseline — they only compare against a previous state. For example, if the system configuration changes from the drift template or if the availability changes, that is a one-time change. After that, the resource has a new status and future changes would be compared against the new status — so, in a sense, it is a different condition.
Dampening does not apply conceptually for drift and availability changes.
Report a bug

There are a couple of different ways to limit how often an alert notification is sent for the same observed condition. One method is a dampening rule. An alternative is to disable an alert the first time it is fired, and then only re-enabling the alert when an administrator does it manually or if the condition resets itself. This second option — disabling and then resetting itself — recovers the alert.
A recover alert is actually a pair of alerts which work in tandem to disable and enable relevant alerts as conditions change.
A couple of workflows are common with recover alerts:

For example, Alert A triggers an alert when a resource availability goes down. When Alert A fires, it disables itself and recovers (or enables) Alert B. Alert B fires an alert when the resource's availability goes up. When Alert B fires, it likewise disables itself and recovers Alert A.
Recover alerts inform an administrator first of when an issue occurs and then second when it is resolved. In the availability examples, the first alert lets the administrator know that a resource is offline, while the second alert lets the administrator know that the resource is back online.

Tim the IT Guy has several servers that he uses for email routing and other business operations, and then he has a couple of machines that he holds in reserve as backups.

Tim creates a set of alert definitions to help handle the transition between his mail servers.