Raw metric data and aggregated metric data are stored in a dedicated, scalable distributed database. Much like the JBoss ON server, there can be multiple storage nodes in a cluster (installed independently of the server). Nodes can be added and dropped from the cloud easily, allowing the metrics storage to be dynamically expanded according to the needs of the environment.

As touched on in Section 16.3, “Potential Impact on Server Performance”, collecting metrics and generating alerts can be resource-intensive. It results in near-constant write operations on the backend database. That creates a natural threshold for the number of metrics that can be collected (30,000 per minute) before encountering performance degradation.

The natural threshold of 30,000 metrics per minute is based on internal performance testing. This threshold varies depending on system resources and overall load.
JBoss ON uses two databases to store its information. One is a central relational database (PostgreSQL or Oracle) which stores all configuration about the JBoss ON servers and agents, all resource inventory data, resource configuration, and other data. The other database is a distributed database (a cluster of storage nodes) which stores all numeric monitoring data — in other words, all collected metrics.
The metrics storage node can be installed on its own dedicated machine, which can significantly improve write performance to the database (and, therefore, improve monitoring performance):
These are the same performance considerations as installing the relational database on a separate machine from the JBoss ON server. By using two databases, it is also possible to move write-intensive and resource-intensive metrics storage away from resource-intensive configuration data, such as drift snapshots and bundle configuration.
Additionally, the distributed database can be expanded, with multiple nodes in a cluster. This ability to add additional nodes according to load is a crucial management tool for administrators. Rather than encountering that hardware-driven limit of 30,000 metrics collected per minute, additional nodes can be added to improve performance.
The storage node cluster is created and managed by JBoss ON (which also minimizes the metrics storage node management overhead). A storage node is installed on a system, using the rhqctl install --storage command. The storage node always requires a companion agent.
At least one storage node must be created and managed by JBoss ON (which minimizes the metrics storage node management overhead since no external tools are required).
There are several paths of communication to handle metrics data, all working in parallel. 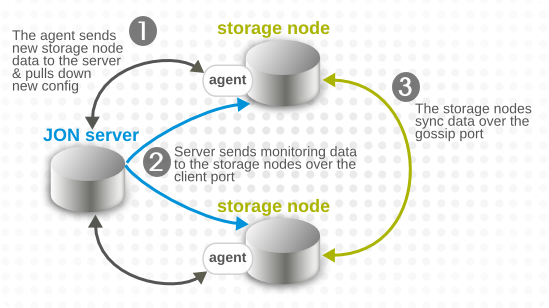 There can be multiple metrics storage databases in the JBoss ON environment. Much like the JBoss ON servers can operate in a cloud, multiple storage nodes communicate with each other to function in a cluster.
Nodes can be added and removed from the cluster by administrators or dynamically using JBoss ON scripts in response to changes in the environment.
With the default cluster configuration, a node is deployed as soon as it is installed and configured in the JBoss ON server. These are actually two separate steps.
Whether to deploy nodes automatically or manually can be determined by the provisioning and monitoring requirements of the environment.

There are two critical requirements for deploying nodes:

When creating a new storage node, two components are always installed: the storage node and a companion agent. The only required information to set up the node is the IP address of the JBoss ON server. The agent registers with the server and then sends the storage node hostname or IP address. The server then distributes that information among the other agents and it gets propagated into the cluster.
If the cluster is using custom client and gossip ports, then edit the rhq-storage.properties file with the correct ports before running the installation script.
Run the installation script with the --agent-preference option to supply the server bind address. For example:

When installing on Linux, the rhqctl command must be run as root. On Windows, the command prompt must be opened with the option Run as Administrator.
The deployment operation can take several minutes to complete, as the new node information is propagated among the existing nodes. Until the deploy operation is complete, the node shows a status of Joining.

By default, when a new storage node is installed, it is automatically deployed to the cluster. However, there is a cluster setting that disables automatic deployments. This can be useful if machines are being provisioned and taken offline repeatedly (such as in virtual environments) or if nodes should only be online during certain periods.

Storage nodes can be removed using the JBoss ON CLI and scripts, as well. This can be useful when provisioning and removing systems from the infrastructure.
For example: