JBoss Enterprise Application Platform 6 is modular and flexible, with an unlimited number of configuration and deployment options depending on your environment.
These chapters do not cover every single management options or task possible through JBoss ON. Rather, they cover tasks or configuration that are unique to EAP 6 or that require special consideration when used to manage EAP 6.

The key features of JBoss EAP 6 are a modular class-loading structure and a domain framework which centralizes configuration in a single controller. These two features have one big asset in common: flexibility. The idea is to start with a small, lightweight application server and then add in the modules for the desired functionality and the server instances for a naturally distributed system.
JBoss ON works within the changeability of that system to bring clarity into how those modular, distributed resources are related and to provide an extra skin of both administrative control and information visibility.
JBoss ON imposes a hierarchy and structure on JBoss EAP 6 installation, but before you can have an idea of how that structure is applied, it helps to have an understanding of the order that EAP 6 itself has.

JBoss EAP 6 topologies for standalone and domain servers are described in the JBoss AS 7 project documentation.

Most of the functionality for the JBoss EAP 6 server is implemented through independent classes or subsystems. Which subsystems a server uses, and their configuration properties or configured instances, are defined in a profile.
A standalone instance for EAP 6, much as in EAP 5, is a collection of those defined subsystems, a set of socket bindings to define communications, network interfaces, and other settings.
The entire server instance is defined in its standalone.xml file. Almost every entry in that file is identified as a child of the server. For example, these subsystem entries create the ee and jmx child resources for the server:
Likewise, socket bindings, network interfaces, and deployed content, which are defined in the configuration file, are discovered as resources.
Subsystems like datasources and logging configuration can have multiple instances defined; these are all configured as child resources of the subsystem. Because of the modular nature of the EAP 6 server, the exact subsystems — and therefore the exact children in JBoss ON — vary with the subsystem and other definitions in the configuration file.
Overall, because of the number of subsystems and other configuration settings, the standalone server has a very wide, flat, and shallow inventory tree. JBoss ON imposes little additional hierarchy on the standalone server structure. It reflects the way the server is configured in standalone.xml.

Management and operations for the standalone server are self-contained. Every child node for the standalone server combines both its configuration and its runtime environment (monitoring, alerting, and operations) in the same location. To change the configuration for a datasource, for example, edit the datasource entry directly. Every standalone server is managed independently of any other server, even in the same cluster or the same machine.
All of this is comparable to the structure and functionality of a JBoss EAP 5 server, with some slight differences in the organization of the inventory.

The domain configuration is defined in the domain.xml file. This lists all of the configured profiles and subsystems, server groups, socket binding configuration, system properties, deployments, and other settings. As with the standalone server, almost every entry is discovered and added to the inventory as a resource. For example, this creates a server group resource, with a child deployment resource and a child JVM resource for the server group. 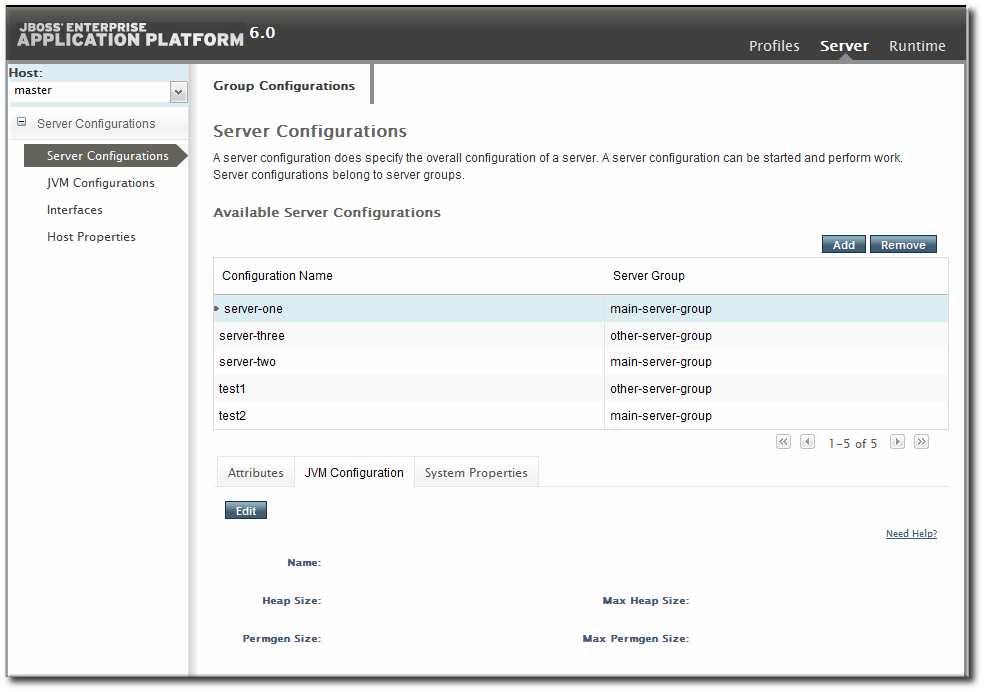 Managing domain resources in JBoss ON is less about managing the configuration than it is managing information. One of the strengths of the JBoss ON inventory structure is that is exposes the components of the domain very clearly and helps delineate the relationships between those resources.

For example, the entry for a managed server lists all of the subsystems defined in its server group's profile, it lists its host controller definition, and it lists managed web applications deployed on it (through the server group). This consolidates all of the configuration information that is applied to that one worker instance, which makes the monitoring information on that managed server more valuable.
There is a shade of artificiality in the JBoss ON inventory in order to maintain the domain relationships. The domain is a single, overarching entity, but the components of the domain can span multiple platforms and resources on those platforms. The domain controller is considered the parent resource for all domain resources, regardless of their platform. This is hinted at in Figure 31.5, “Domain Components in the JBoss ON Inventory”. The domain controller is on Platform 1, so even though a host controller and two managed servers are on Platform 2, the host controller and managed resources are shown as children of the domain resource (on Platform 1).

Figure 31.5. Domain Components in the JBoss ON Inventory

31.1.4. The Purpose of Managing EAP 6 Resources with JBoss ON

The JBoss ON UI maintains parity with the EAP 6 console, so it can be used to edit most configuration settings, create child entries, and deploy content, same as the EAP 6 management console.
The purpose of JBoss ON management, though, is not to have yet another web UI to use. JBoss ON maintains a larger perspective on the resources within the domain. This infrastructure-wide perspective reveals the relationship of a resource within the domain, the larger IT structure, and even itself and its own history aside from simply making a current configuration change.
Standalone servers and domains in JBoss ON are organized in a way that highlights the information that is available to administrators: