25.3.1. Notifying Administrators and Responding to Alerts

Every alert is recorded and viewable in the JBoss ON GUI. Alerts have an optional configuration, though, of sending an external notification whenever the alert is issued.
Once an incident occurs, there has to be a way to let a systems administrator know what is going on, so they can respond to an issue. This is done by configuring a notification. Alert notifications fall into two categories: a way of communicating the alert and an action to take in response to an alert.
There are three methods, by default, of communicating that an alert has been fired:
There are also a few default methods of having JBoss ON respond to an alert:

It is also possible to write custom alert methods, which are implemented as server-side plug-ins. Creating custom plug-ins is described in the JBoss Operations Network Plug-ins Writing Guide.
Alert notifications can be clustered. That just means that the same alert can be broadcast through several different methods at the same time. For example, if a public website goes down, then a company may want notifications to be sent to their head web administrator and to have the web server restarted at the same time.

A single alert can initiate multiple notifications. Alert notifications are run in the order they are listed in the alert definition.

Alert operations can use tokens to either send information or supply information about the event. For example, tokens can be used to supply resource information in a command-line script.
Alert operations can accept tokens to fill in certain values automatically. These tokens have the following form:
The space gives the JBoss ON configuration area where the value is derived; this will commonly be either alert or resource. The param_name gives the entry value that is being supplied. For example, to point to the URL of the specific fired alert, the token would be <%alert.url%>, while to pull in the resource name, the token would be <%resource.name%>.
JBoss ON has pre-defined token values that relate to the fired alert, the resource which issued the alert, the resource which is the target of the operation, and the operation that was initiated. These are listed in Table 25.2, “Available Alert Operation Tokens”. All of these potential token values are Java properties the belong to the operation's parent JBoss ON server.
The alert operations plug-in resolves the token value itself when the alert operation is processed to find the value. The realized value is sent to the script service, which ultimately plugs the value into the command-line argument or script which referenced the token.

A single alert can initiate multiple operations. All alert operations, as with all alert notifications, are run in the order they are listed in the alert definition.
The Notifications tab has a Resource Operations method. 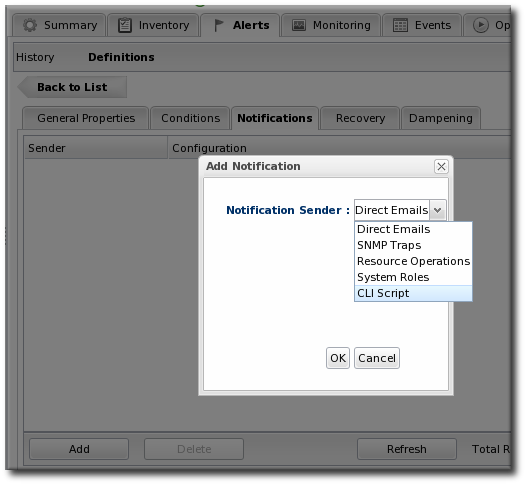 There are two parts to the operation. First is selecting which resource the operation will run on. The resource type determines what operations are available.
The default is the resource that the alert is set for; it is also possible to set it on another specific resource or on the results of a search. 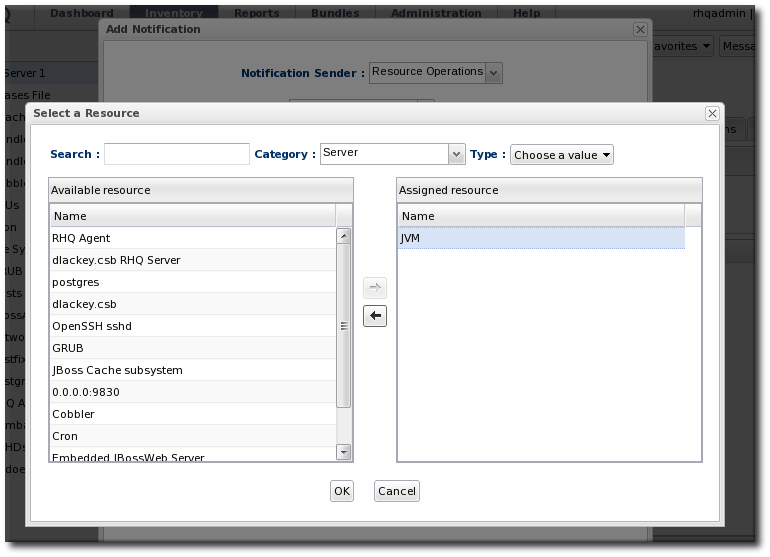 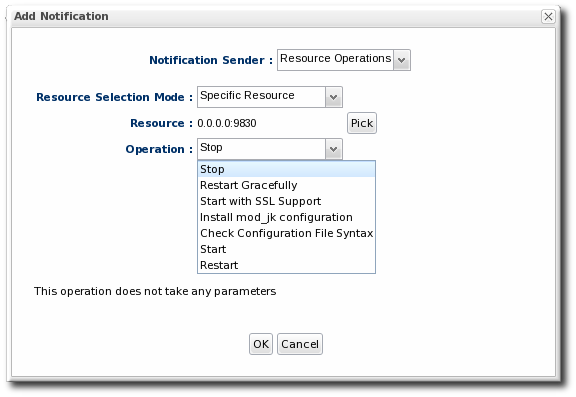 Scripts, such as shell and bat scripts, can be imported into the JBoss ON inventory and managed as resources (Section 5.4, “Importing New Resources Manually”). These scripts can include start scripts, configuration scripts, or diagnostic scripts.
As described in Section 25.3.2.2, “Setting Alert Operations”, an alert notification can run an operation on a resource (even a different resource than the one which triggered the alert). A specific usage scenario is to run a resource script as an operation. 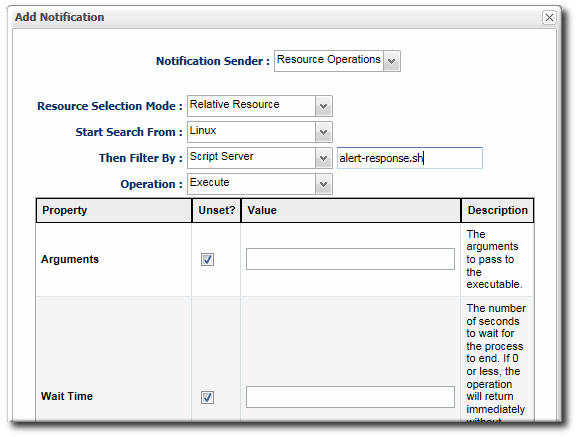 If you select a relative resource and do not enter a specific script name in the name filter field, then the operation will run on every script resource that is in the relative path with the command arguments that are given. If no script matches, then it is logged into the audit trail and the alert process proceeds.
For a relative resource, the resource name is not required. For a specific resource, it is. To limit script execution to a single specific script, select the specific resource option and select the precise script from the list.

25.3.4. Detailed Discussion: Launching JBoss ON CLI Scripts from an Alert

Unlike resource scripts, CLI scripts are not treated as resources in the inventory. These are tools available to and used by the JBoss ON server itself (not limited or associated with any given resource).

Server CLI scripts must be uploaded to the server as content within a repository before it can be run.
CLI Scripts and the Remote API

The CLI script must use the proper API to perform the operation on the server. JBoss ON has several different API sets, depending on the task being performed. To connect to a server and run a script requires the remoting API, which allows commands to be executed on the server remotely.

The CLI script can actually reference an alert object for the alert which triggers the script by using a pre-defined alert variable.

The alert variable implicitly identifies the alert definition and specific alert instance which has been fired. This allows you to create a proxy resource definition in the script that could be applied to any resource which uses that alert script.
The resource ID is pulled from the fired alert, and the script can reference the resource from there.
Limits on CLI Scripts

Be aware of potential security implications or resource constraints when writing a CLI script to be used as an alert response.

Server-side scripts are both powerful and versatile. They can touch almost any server functionality and any resource, group, or other object and run a series of commands. This versatility makes CLI scripts very useful to responding to alerts in proactive ways, but it means that the alert should be planned to notify on specific conditions and the script should be designed to respond to that specific set of circumstances.
In other words, make the alert specific and the CLI script relevant.
This script checks the recent monitoring statistics for a web application and restarts the web server database if there are connection problems:
Commands, options, and variables for the JBoss ON CLI are listed in Writing JBoss ON Command-Line Scripts.
An example alert script is included with the server files in serverInstallDir/alert-scripts/.

Configuring JBoss ON to send SNMP alerts has two parts:

JBoss ON can send SNMP traps to other management stations and systems as part of alerting notifications. The data transmitted contain details about the alert, such as the name of the alert that was triggered and the resource name.
The data to include in the traps, as with other SNMP notifications, are defined in the JBoss ON MIB file, in serverRoot/etc/RHQ-mib.txt. The default configuration for the MIB is shown in Example 25.1, “Default Alert Object in JBoss ON MIB”. The base OID for the JBoss ON alert is 1.3.6.1.4.1.18016.2.1 (org.dod.internet.private.enterprise.jboss.rhq.alert).

With the default MIB file, each trap sends the alert definition name, resource name, platform, alert conditions, severity, and a URL to the alert details page. The location of the MIB can be passed to the SNMP trap server to view the translated MIBs. For example, using NetSNMP:
The -M gives the path to the SNMP server's MIB directory.
In that case, an alert notification is recorded in the trap like this:
The output is similar in tcpdump, just all on the same line:

The SNMP alert sender plug-in is the only alert notification plug-in that requires additional configuration before the notification method can be used. The SNMP plug-in has to be configured with the appropriate SNMP version and SNMP agent information.

Before JBoss ON can send any SNMP notifications, SNMP traps have to be configured for the server.
When configuring the alert, select the SNMP Trap notification type, and fill in the JBoss ON SNMP information. 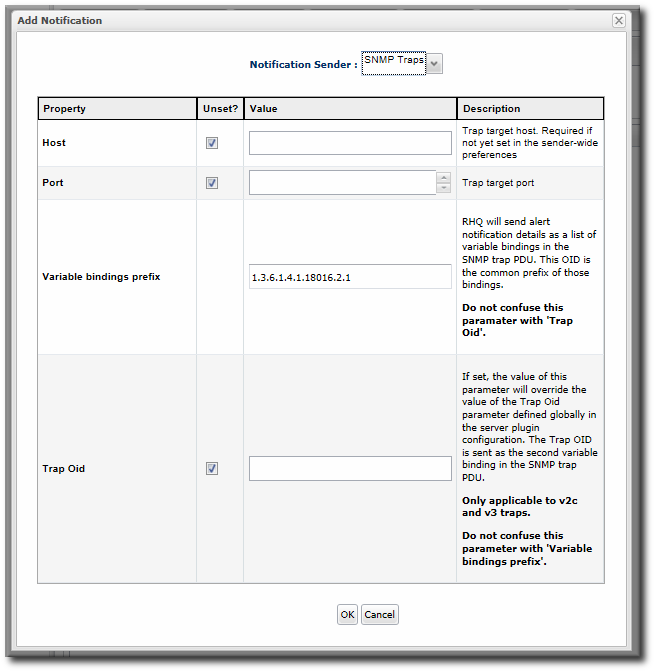