Of course, drift monitoring isn't as simple as checking for changes. One of the core questions is what changes matter? There are two conceptual parts to that question:
Once you identify what changes you want to monitor for drift, then you can use JBoss ON to set up monitoring and alerting effectively.

The first part of drift detection is identifying what you are monitoring.
JBoss ON defines a drift definition that sets the target location for drift monitoring. The target can be identified from some configuration element for the resource — it can be a directory or file on the filesystem, a resource configuration property, a resource plug-in parameter, or a monitoring trait. This target is the base directory. The trait type is the value context, while the actual value is the value name. For example, for a base directory of /etc/ that only includes changes to *.conf files, the elements in the drift definition are:

Drift detection is performed at the filesystem level. This means that drift detection is not bound or restricted to a resource managed by JBoss ON. You can create a drift definition for a platform and set it to monitor any file or directory on that platform, even if it is outside the JBoss ON inventory, as long as that directory is accessible to the system user that the JBoss ON agent runs as.
By default, every subdirectory and file underneath the base directory is monitored for drift. The includes/excludes options define subdirectories or files that are explicitly included or explicitly excluded from drift monitoring. If includes is used, then only the specified directories or files are monitored and everything else is implicitly excluded, and vice versa for excludes. Included/excluded directories and files are identified by a path and a pattern. The path is the starting point beneath the base directory, and the pattern matches the file to monitor.

Table 1. Combinations to Include Specific Files

The drift definition also sets an interval, or frequency, for how often the agent checks for drift. This is a very important setting for performance, both for JBoss ON and for data management. Setting a frequency that is too high risks missing changes or lumping changes together into large (and therefore difficult to manage) snapshots. However, setting the interval too low can impact JBoss ON agent and server performance.
The key thing about the drift definition is that it sets what to look at and how often to look.

The second part of drift detection is identifying how you want to define a change. Change is comparative. It takes the current version of a file and compares it to some previous version. The question for drift management is what previous version to compare to.
When a drift definition is first created, the agent collects all of the files in that base directory and subdirectories and sends information about them to the server. This collection is the initial file set.
From that point onward, the agent only sends change information about the files. Each set of changes is a snapshot. For text files, the change information includes the content of the file and diffs (both constructed on the JBoss ON server based on patches sent by the agent). For binary files, drift only records that the file change and displays a SHA and timestamp. A snapshot is always based on real files from a real resource.

The agent does not send the actual files to the JBoss ON server. The agent sends information about file changes back to the server. These updates only contain the deltas between versions; they're not full files. This minimizes the network I/O.
The actual diffs are generated on the server from the content that the server stores.
The way that a snapshot is created is by comparing the current files against the agent's version. There are two ways that this comparison can be made:
The first option is a rolling snapshot. This is the simplest setting, because it just keeps a running tally of changes. 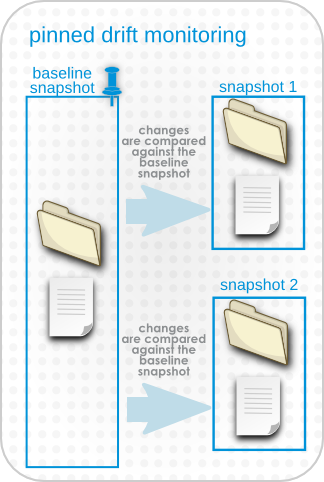 Snapshots exist at the resource-level, because they are based on the real files that exist on a system. When a snapshot is pinned to a resource-level definition, then any changes made on that system are compared to that snapshot. When the current file version matches the pinned snapshot, the resource is compliant.
A snapshot for a resource can also be pinned to a drift template — then, it is applied to every definition attached to that template. This is really powerful for administrators. For example, you can use a staging or development server to create the best system configuration for EAP performance, and then apply that EAP baseline snapshot to every EAP server in the production environment by pinning it to a drift template. You can see immediately all the EAP configuration relative to your defined ideal.

Drift looks at both files and directories on the local system to generate snapshots and identify changes. The majority of these files and directories are going to be real files, but Unix does have some special file types, and the drift operation may encounter those files as part of processing the destination directory. There are some behavior implications, particularly with symbolic links and named pipes.
With symbolic links, drift detection follows any links back to the original file or directory, and includes those files in the snapshot. For example, if a symlink is set up for some library:
If drift is configured on the libs/ directory in the JBoss AS home directory, it will follow the symlink back to /home/dev/libs, and include all of those files in the drift snapshot.

Be careful when configuring drift against a directory which contains symlinks. All of the linked files will be included as part of the drift target.
If the linked directory has a large number of files, then drift detection runs may take longer than expected. Additionally, changes in that symlinked directory may have an unexpected impact on drift detection by recording many changes as drift when they weren't intended to be.
If you do not want to include the symlinked directory in the drift definition, use the excludes parameter in the drift definition to exclude the symlink.
The other special file type that is common on Unix systems is a pipe. As with a symlink, drift detection runs can detect a fifo file within the target directory. However, unlike symlinks, drift cannot process the fifo file, which causes drift detection to hang.

Use the excludes parameter in the drift definition to exclude any named pipes in the target directory.

The goal of setting up drift detection is to provide clarity into how systems and application servers are being modified. JBoss ON provides two ways to manage drift.
Drift Monitoring

Drift monitoring is the ability to track changes to target locations. The JBoss ON GUI allows you to view snapshots all together, compare changes for individual files between snapshots, view the current configuration, and view change details. It also provides inventory and drift reports and indicates, at a glance, whether a resource is compliant with an associated pinned snapshot.

A specific alert condition exists that will trigger an alert whenever there is drift. For rolling snapshots, this will send an alert once (and only once) for each drift snapshot. For pinned snapshots, the drift alert is fired for every detection run for as long as the resource is out of compliance, even if there are no subsequent changes.

There is no direct way to remedy drift through the JBoss ON GUI. However, it is possible to launch a JBoss ON CLI script in response to a drift alert. For example, you can create a patch of your ideal EAP configuration. If an EAP server drifts from that configuration, then you can use a JBoss ON CLI script to deploy that EAP patch bundle to the drifting EAP server.
[1] JBoss ON detects that changes have been made to a binary file. It does not display binary files or compare or diff changes between versions for binary files, only text files.