Uploading a bundle to JBoss ON does not push the bundle anywhere, so it is not automatically associated with a resource or group. (Bundles, unlike content, is resource-independent. It exists as its own definition in JBoss ON, apart from the inventory.) When the bundle is actually provisioned, then the provisioning wizard prompts for the administrator to define the destination.
A destination is the place where bundles get deployed. The destination is the combination of three elements:
For example, an administrator wants to deploy a web application to a JBoss EAP 5 server, in the deploy/myApp/ directory. The JBoss AS5 plug-in defines two possible base locations, one for the installation directory and one for the profile directory. The administrator chooses the profile directory, since the application is an exploded JAR file. The agent then derives the real, absolute path of the application from those three elements:
If the PROFILE_DIR is /opt/jbossas/default/server/, then the destination is:
If the same resource group contains a JBoss EAP instance running on a Windows server, with a PROFILE_DIR of C:\jbossas\server\, then the path is derived slightly differently, appropriate for the platform:
It is up to the agent, based on the platform and resource information for its inventory, to determine the absolute path for the destination to which the bundle should be deployed.
Once a bundle is actually deployed to a destination, then that association — bundle version and destination — is the bundle deployment. 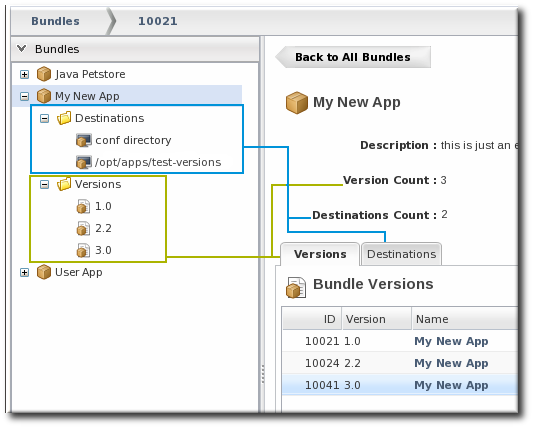