One way of understanding how JBoss EAP security and its components work together is to review real scenarios. The following sections cover several generalized but realistic situations that involve the various JBoss EAP security components and configuration options. They focus on how an application or set of applications is secured as well as how the management interfaces are secured.

5.1. Red Hat JBoss Enterprise Application Platform Out of the Box

This scenario shows how JBoss EAP and a sample application are secured when no configuration changes are made after the initial installation. An application, sampleApp1.war, is deployed and configured to use container-based security. 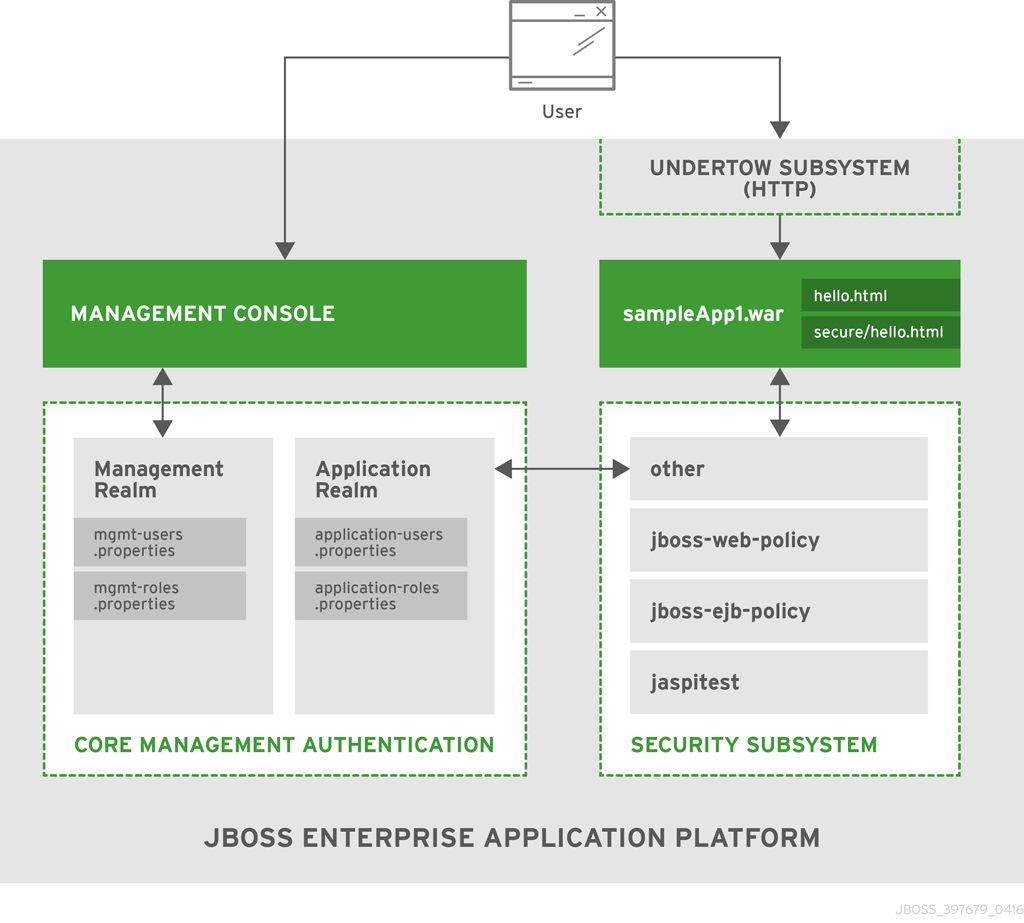 5.1.1. Core Management Authentication out of the Box

For this scenario, the following users have been added to a default installation of JBoss EAP:

On startup, the JBoss EAP instance loads the ManagementRealm and ApplicationRealm security realms.

5.1.2. Security Subsystem out of the Box

The security subsystem comes preconfigured with four security domains: other, jboss-web-policy, jboss-ejb-policy, and jaspitest. The other security domain performs authentication and authorization by delegating to the realm specified in the login module, which uses ApplicationRealm by default.

The application sampleApp1.war has two HTML files, /hello.html and /secure/hello.html, and uses basic HTTP authentication to secure the path /secure/*. It uses the other security domain and requires the role of sample. Because the other security domain defers to ApplicationRealm for its authentication and authorization information, refer to the users in the Users table from the previous section.

This scenario shows how JBoss EAP is secured when HTTPS is enabled for the management interfaces and RBAC is added to the ManagementRealm security realm. 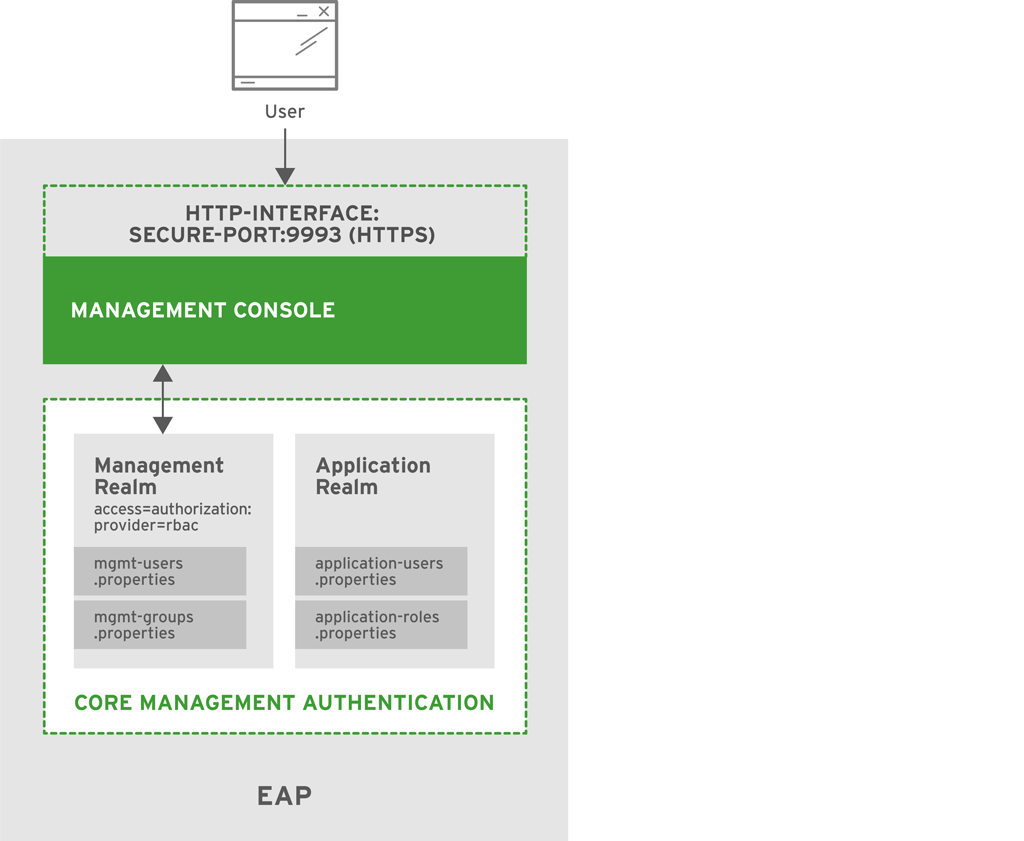 JBoss EAP also offers the ability to enable RBAC on the management interfaces using a couple of different authentication schemes. This example uses username and password authentication with the existing property files used in the ManagementRealm. RBAC is enabled by setting the provider attribute to rbac for the management interface and updating the ManagementRealm with the desired users and roles.

For this scenario, the following users have been added to the existing security realms:

Based on group membership, the users have also been mapped to the following RBAC roles:

On startup, JBoss EAP loads the ManagementRealm, with the RBAC configuration, and management interfaces as part of the core services, which also starts the http-interface, configured for HTTPS, for the management interfaces. Users now access the management interfaces via HTTPS, and RBAC has also been enabled and configured. If RBAC is not enabled, any user in the ManagementRealm security realm is considered a SuperUser and has unlimited access. Because RBAC has been enabled, each user is now restricted based on the roles they have. Suzy, Tim, Emily, Zach, and Natalie have different roles, which are shown in the table above. For example, only Suzy and Tim can read and modify access control information. Suzy, Tim, and Emily can modify runtime state and other persistent configuration information. Zach can also modify runtime state and other persistent configuration information but only related to application resources. Suzy, Tim, Emily, Zach, and Natalie can read configuration and state information, but Natalie cannot update anything. For more details on each of the roles and how JBoss EAP handles RBAC, see the Role-Based Access Control and Adding RBAC to the Management Interfaces sections.

This scenario shows how a sample application running on JBoss EAP is secured when a new security domain is added and HTTPS is enabled. An application, sampleApp2.war, is deployed that is configured to use container-based security, sample-domain, and HTTPS. 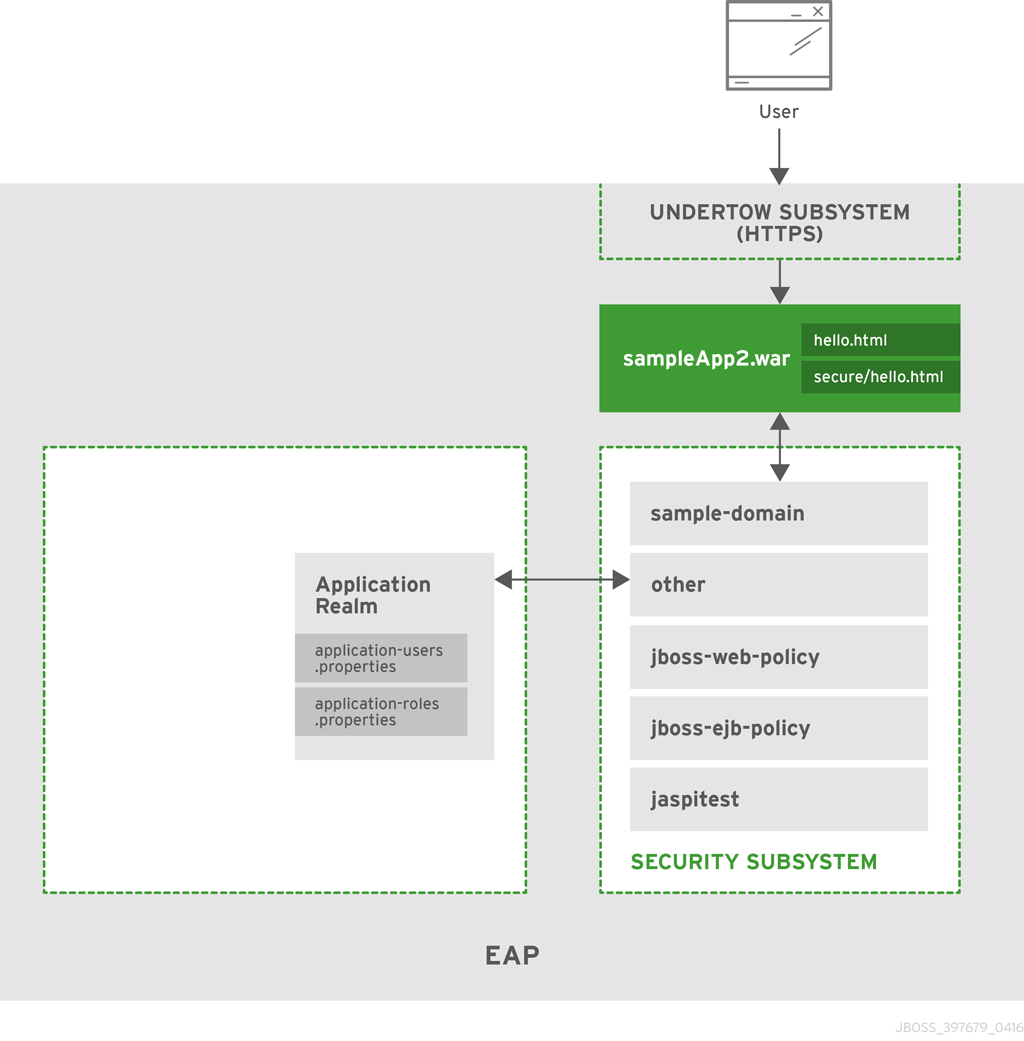 JBoss EAP provides support for using HTTPS for use with applications, which is handled using the undertow subsystem. A new connector for HTTPS is added to the undertow subsystem and is configured with the desired settings, for example, protocol, port, keystore, and so on. Once the configuration is saved, web applications can start accepting HTTPS traffic on the configured port. A new security domain called sample-domain has been added, and it uses the IdentityLoginModule for authentication. sampleApp2.war is configured to use sample-domain to authenticate users.

A security domain, sample-domain, has been created and configured to use the IdentityLoginModule. The following credentials have been configured in the login module:

On startup, JBoss EAP loads the core services and starts the undertow and security subsystems that manage the HTTPS connections for all web applications and the sample-domain, respectively. sampleApp2.war is loaded and looks for sample-domain for providing authentication and authorization for its secured URLs. sampleApp2.war has two HTML files, /hello.html and /secure/hello.html, and uses basic HTTP authentication to secure the path /secure/*. It uses the sample-domain security domain and requires the role of sample. 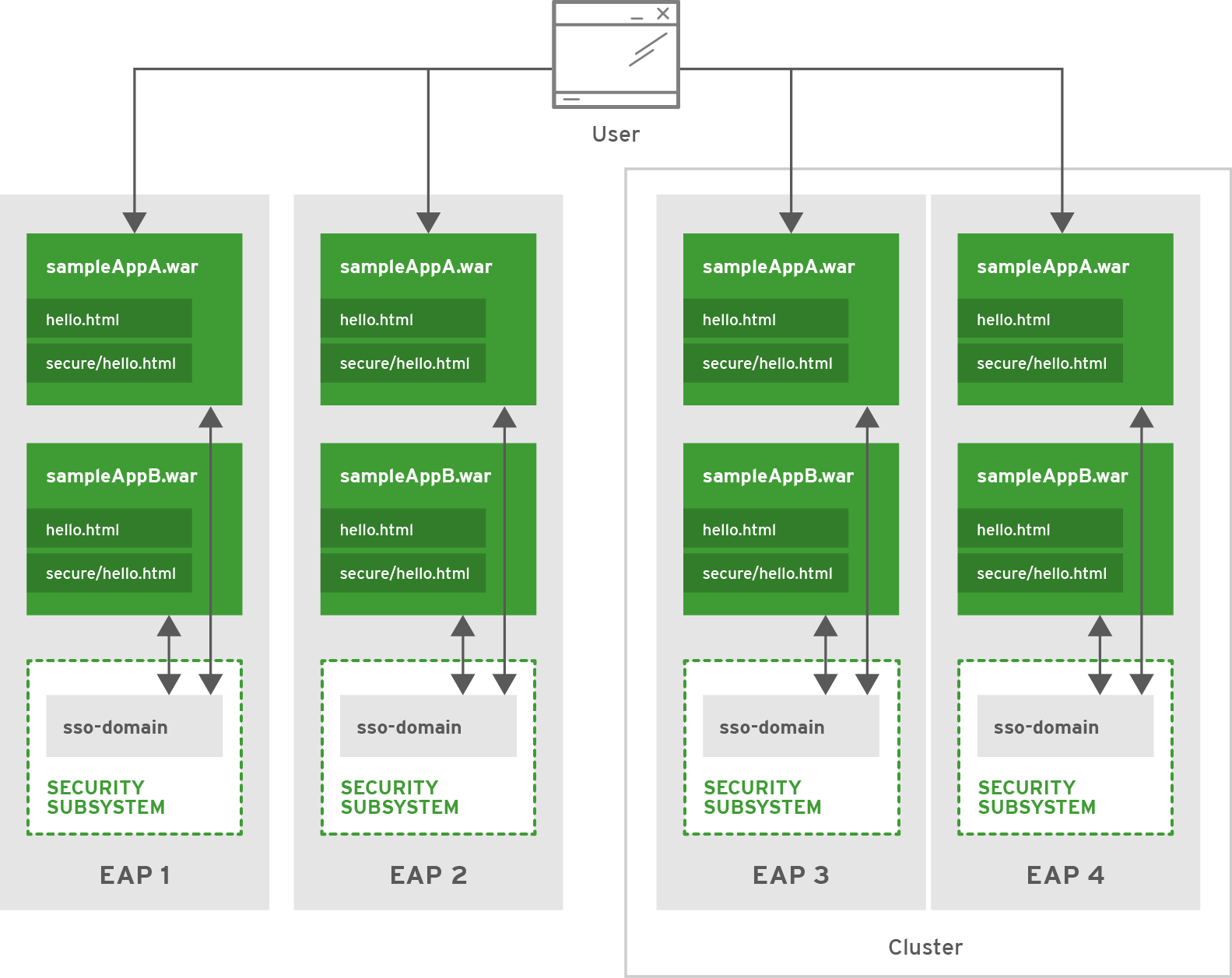 JBoss EAP provides support for clustered and non-clustered SSO with web applications by using a combination of the security, undertow, and infinispan subsystems. The security subsystem provides a security domain for performing authentication and authorization, while the infinispan and undertow subsystems help with caching and distributing the SSO information between all the web applications on an JBoss EAP instance or across a JBoss EAP cluster. All four EAP instances have a security domain, sso-domain, configured to use the IdentityLoginModule. sampleAppA and sampleAppB have been configured to use the sso-domain security domain to secure the path /secure/* and require the role of sample to access it. The following credentials have been configured in the sso-domain login module:

There is a distinct difference between a clustered web application and clustered SSO. A clustered web application is one which is distributed across the nodes of a cluster to spread the load of hosting that application. In clustered applications marked as distributable, all new sessions and changes to existing sessions are replicated to other members of the cluster. Clustered SSO allows for replication of security context and identity information, regardless of whether the applications are themselves clustered. Although these technologies may be used together, they are mutually exclusive and may be used independently.

On startup, JBoss EAP loads the core services and starts the security, undertow, and infinispan subsystems that manage sso-domain and the associated caching for SSO information. sampleAppA.war and sampleAppB.war are loaded on all four JBoss EAP instances, each of which look for sso-domain for providing authentication and authorization. 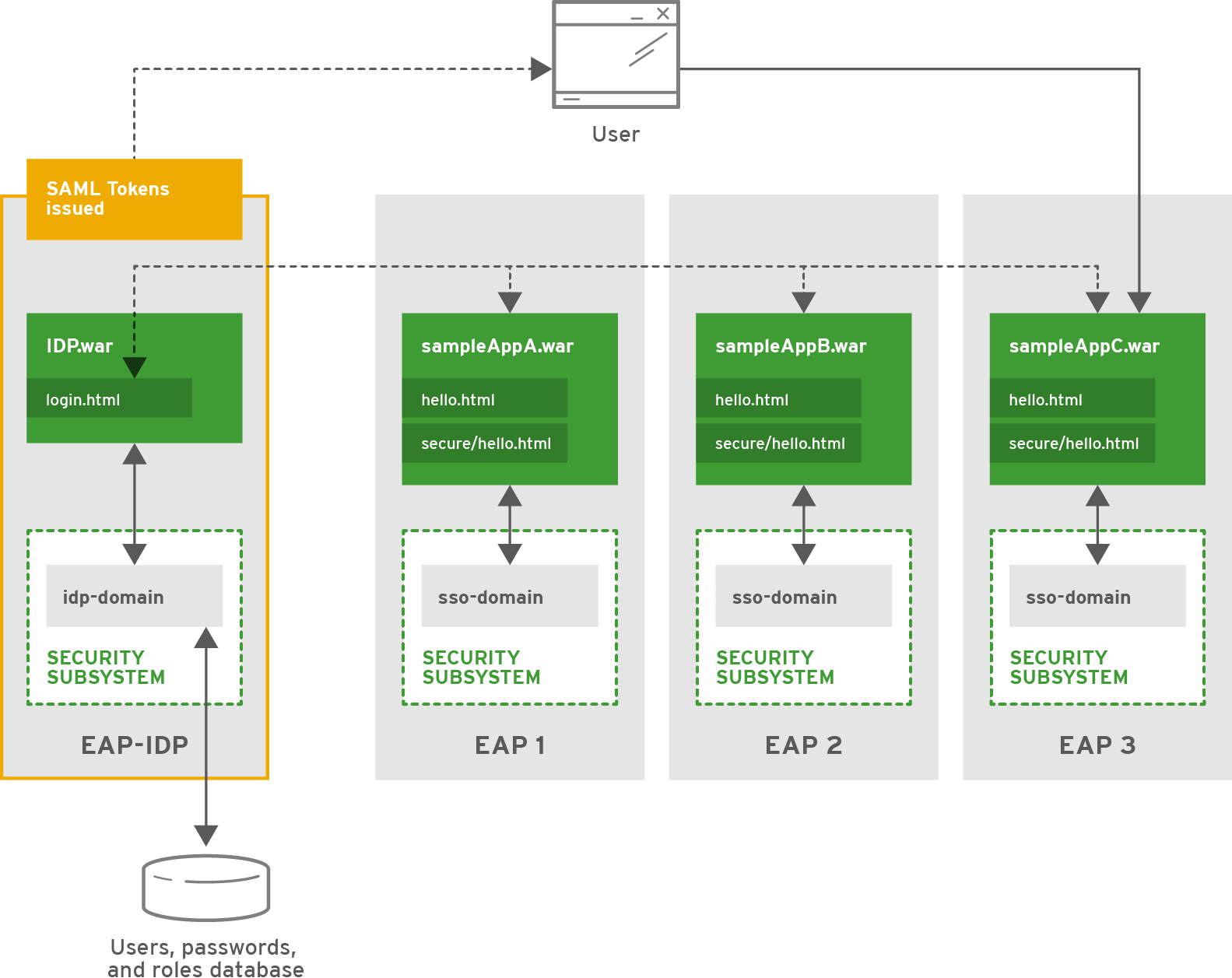 For this scenario, the following users have been added to the database used by the DatabaseLoginModule in the idp-domain security domain:

On startup of EAP-IDP, the management interfaces start, followed by the subsystems and deployed applications, including the security subsystem, which includes idp-domain, and IDP.war. idp-domain connects to the database and loads the usernames, passwords, and roles as configured in the DatabaseLoginModule login module. To prevent sensitive information from being stored in plain text in the configuration of the DatabaseLoginModule login module, password hashing is configured to obscure certain fields, for example, password for the database. IDP.war uses idp-domain for authentication and authorization. IDP.war is also configured, using jboss-web.xml, web.xml, picketlink.xml, and jboss-deployment-structure.xml, to issue SAML tokens to authenticated users and supplies a simple login form for users to authenticate against. This allows it to serve as an IDP.

On startup of EAP1, EAP2 and EAP3, the management interfaces start, followed by the subsystems and deployed applications, including the security subsystem, which includes sso-domain on each instance, and sampleAppA.war, sampleAppB.war, and sampleAppC.war, respectively. sso-domain is configured to use the SAML2LoginModule login module but relies on the application to supply the proper SAML token. This means any application using sso-domain must properly connect to an IDP to obtain a SAML token. In this case, sampleAppA, sampleAppB, and sampleAppC are each configured, via jboss-web.xml, web.xml, picketlink.xml, and jboss-deployment-structure.xml, to obtain SAML tokens from an IDP, IDP.war, using that IDP’s login form.

Each application is also configured with its own set of allowed roles:

If Eric were to return to EAP1/sampleAppA/secure/hello.html, or any URL under EAP2/sampleAppB/secure/* or EAP3/sampleAppC/secure/*, after his SAML token became invalidated via global logout, he would be redirected to EAP-IDP/IDP/login.html to authenticate again and be issued a new SAML token.

5.6. Using LDAP with the ManagementRealm

This scenario shows the ManagementRealm using LDAP for securing the management interfaces. A JBoss EAP instance has been created, EAP1, and is running as a standalone server. The ManagementRealm on EAP1 has also been updated to use LDAP as the authentication and authorization mechanism. 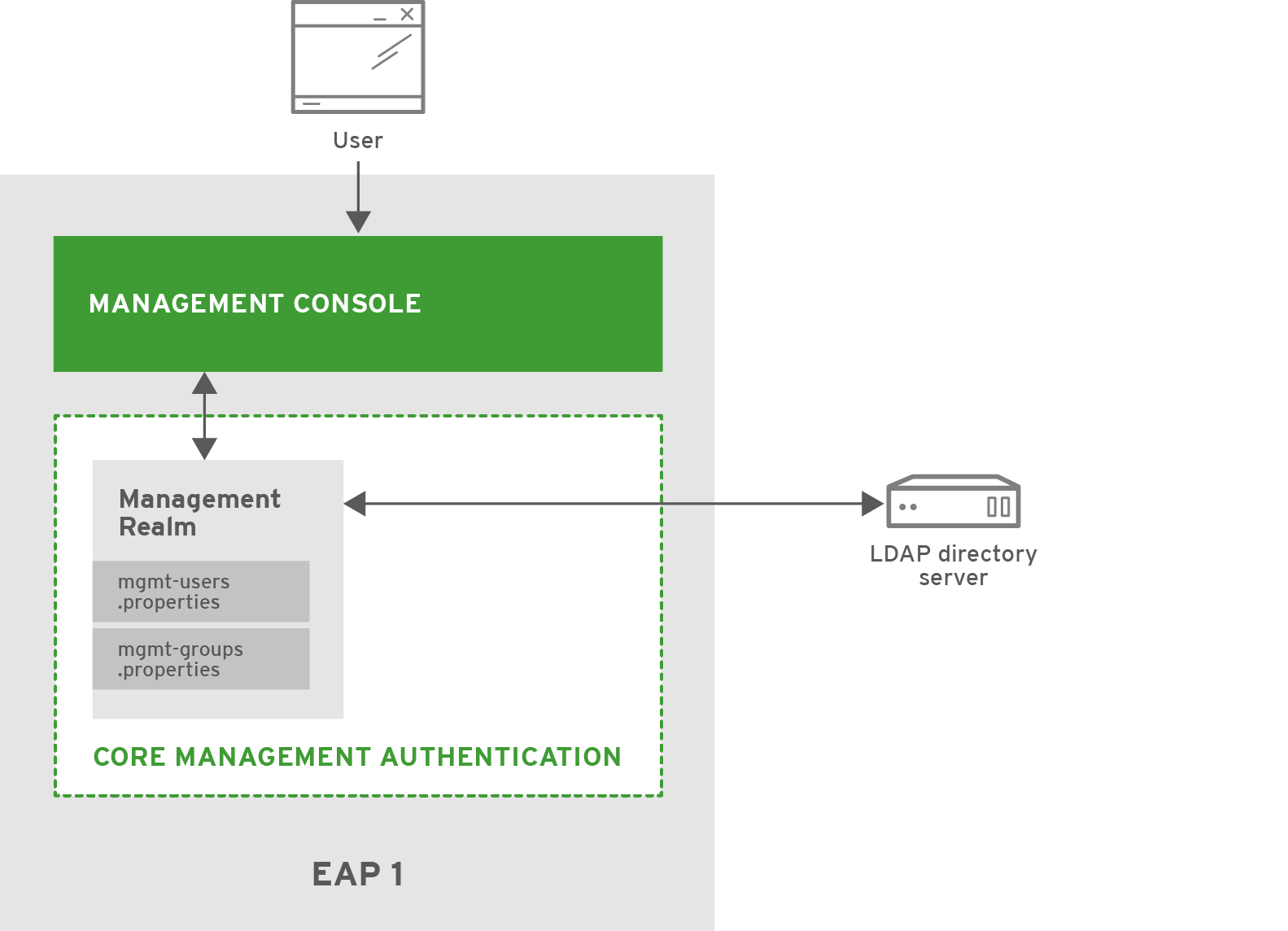 JBoss EAP supports using LDAP, as well as Kerberos, for authentication in security realms. This is accomplished by updating the existing ManagementRealm to use ldap as the authentication type and creating an outbound connection to the LDAP server. This changes the authentication mechanism from digest to BASIC / Plain and will transmit usernames and passwords in the clear over the network by default.

The following users have been added to the LDAP directory:

If Adam` attempts to access a management interface, he will be forced to authenticate. His credentials will be passed to the ManagementRealm security realm, which will use the LDAP directory server for authentication. Since EAP1 is using the default simple access controls, after authentication, Adam’s roles will not be checked and he will be granted access. The same process will occur if Sam attempts to access the management interface.

This scenario shows how Kerberos can be used with JBoss EAP to provide SSO for web applications. A JBoss EAP instance has been created, EAP1, and is running as a standalone server. Two web applications, sampleAppA and sampleAppB, have been deployed to EAP1. Both the web applications and EAP1 have been configured to authenticate using desktop-based SSO via Kerberos. 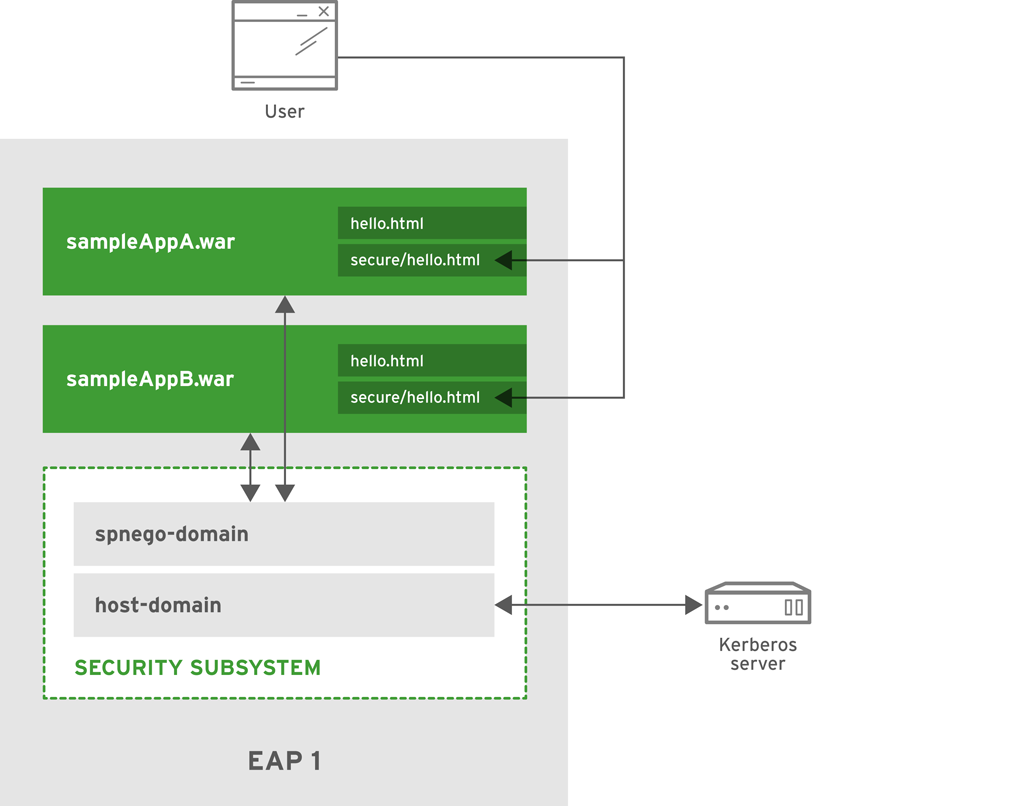 JBoss EAP offers support for using Kerberos for SSO in web applications via SPNEGO and JBoss Negotiation. For more information on the specifics of Kerberos and SPNEGO, see the Third-Party SSO Implementations section. To enable JBoss EAP and deployed web applications to use Kerberos for authentication, two security domains must be created. The first security domain, host-domain, is configured with the kerberos login module to connect to the Kerberos server. This allows JBoss EAP to authenticate at the container level. A second security domain, spnego-domain, is created with two login modules. One uses the spnego login module to connect to host-domain to authenticate users. The second can use any other login module to load role information for use in authorization decisions, for example, UsersRoles using properties files to map users to roles.

The following users have been created in the Kerberos server:

The following roles have mapped to the users via an additional module that is chained by setting the password-stacking option to useFirstPass:

The following roles have also been configured in each application:

On startup, EAP1 loads the core services, followed by the security and other subsystems. host-domain establishes a connection to the Kerberos server, and spnego-domain connects to host-domain. sampleAppA and sampleAppB are deployed and connect to spnego-domain for authentication.

If Andy were to attempt to access sampleAppA/secure/hello.html from a computer not secured by Kerberos, for example a personal laptop connected to the office network, he would be directed to the FORM login page as a fallback login mechanism. His credentials would then be authenticated via the fallback security domain and the process would continue with authorization.